Chatbots have become an increasingly important channel for businesses to service their customers. Chatbots provide 24/7 availability and can help customers interact with brands anywhere, anytime and on any device. To effectively utilize chatbots, they must be built with good design, development, test, and deployment practices. This post provides you with a framework that helps you automate the testing processes and reduce the overall bot development cycle for Amazon Lex bots.

Amazon Lex is a service for building conversational interfaces into any application using voice and text. Conversations with Amazon Lex bots can vary from simple, single-turn Q&A to a complex, multi-turn dialog. During the design phase, the conversation designer creates scripts and conversation flow diagrams that encapsulate the different ways a conversation can flow for a particular use case. Establishing an easy-to-use testing interface allows bot designers to iterate and validate their ideas quickly without depending on engineers. During the development and testing phase, an automated test framework helps engineers avoid manual testing and be more productive.

The test framework described in this post empowers designers and engineers to test many conversations in a few minutes, identify where the predicted intents are wrong, and implement improvements. The insights provided by this process allow designers to quickly review intents that may be performing poorly, prioritize intents by importance, and modify the bot design to ensure minimal overlap between intents.

The following diagram illustrates the architecture of our solution. 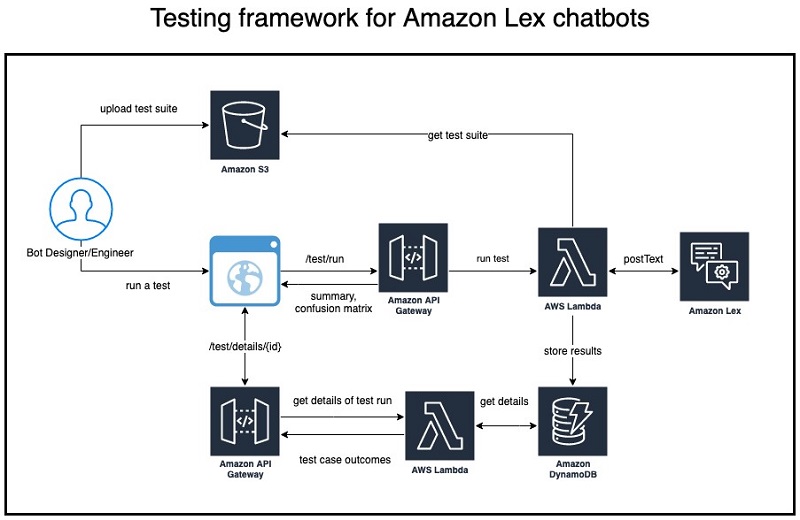 A test framework for chatbots can empower builders with the ability to upload test suites, run tests, and get test results comprised of accuracy information and test case level outcomes. The solution architecture provides you with the following capabilities:

You can deploy this architecture using the provided AWS CloudFormation template in us-east-1. 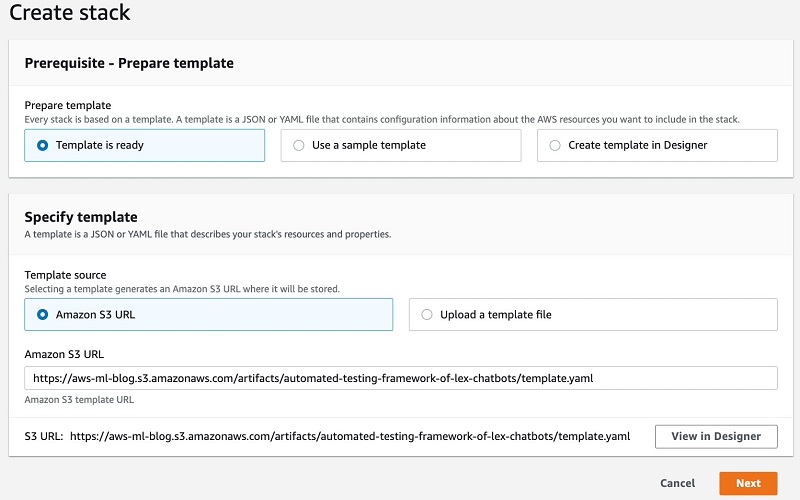 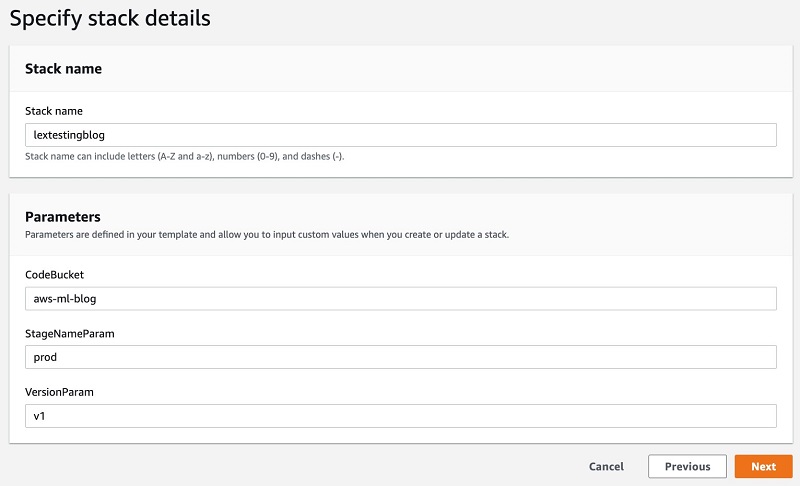 This process might take 5 minutes or more to complete. The stack creates the following resources:

After the CloudFormation template finishes deploying the infrastructure, you see the following values on the Outputs tab: ApiGWKey and LexTestResultAPI.

The LexTestResultAPI requires an API key. The AWS CloudFormation output ApiGWKey refers to the name of the API key. As of this writing, this API key is associated with a usage plan that allows 2,000 requests per month.

The API keys section of the API Gateway console opens.

Setting up your sample UI

You can build a user interface (UI) using your preferred technology stack to trigger the tests and view the results. This UI needs to be configured with the APIs created as part of running the CloudFormation template. You can also use the provided simple HTML file to follow along with this post, but we recommend building your own user interface for enterprise use.

To demonstrate the test framework, we’ve created a simple banking bot that includes several intents, such as:

This application has purposefully been designed to have failures, either from overlapping intents or missing utterances. This illustrates how the test framework surfaces issues to fix.

Setting up your test

To set up your test, complete the following steps:

Format of the test file

Slots: The expected list of slots and their values from Amazon Lex. Slots are separated using “|” symbol.

Response: The expected response message from Amazon Lex. This is optional field for the test framework, but helps with the readability of the results.

To run your test, complete the following steps:

In a few moments, you see a response that has a confusion matrix and test results. The intents that Amazon Lex predicted for each utterance are across the horizontal axis. The vertical axis contains the intents from the ground truth data specified in our test file. The center diagonal from the top left cell to the bottom right cell indicates where intents in the ground truth dataset match the predicted intents.

Any values that fall outside of that center diagonal indicate areas of improvement in the bot design.

In this post, we discuss a few examples from the sample banking bot, which was purposefully designed to have issues.

In the test data CSV file, the first column has a ConversationID label. Each set of utterances making up a conversation is grouped by ID number. Some conversations are a single turn, meaning the request can be satisfied by the bot without the bot asking the user for additional or clarifying slot information. For example, in our simple banking app, the user can ask about the hours of operation and receive an answer in a single turn. In our test data, we’ve included several utterances expected to trigger the BusinessHours intent.

The confusion matrix shows that all utterances that should trigger the BusinessHours intent did so. There are no additional values on the predicted axis aside from the BusinessHours intent, which means this intent is working well. Under the confusion matrix, a more detailed view shows which utterances succeeded and which failed from the test conversations. Again, each of our single-turn conversations 1, 2, and 3 are shown to have succeeded in the Result column.

A quick scan of the other intents indicates that not all were so successful. Let’s take a look at a multi-turn conversation that didn’t perform as well. In the confusion matrix, the TransferFunds row shows that none of our actual utterances were predicted to trigger the TransferFunds intent. That is a problem.

Conversation 15 is a multi-turn conversation intended to trigger the TransferFunds intent. However, it’s shown to have failed. The utterance tested is “Move money from one account to another.” That seems like a reasonable thing for someone to say if they’d like to transfer money, but our model is mapping it to one of our other intents.

To fix the problem, return to the Amazon Lex console and open the TransferFunds intent. There are only a few sample utterances and none of the utterances include the words “move” or “money.” 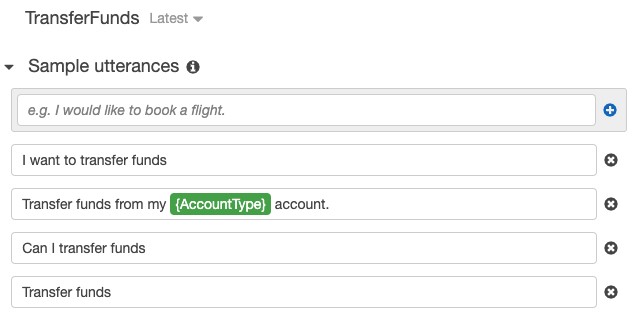 It’s no wonder that the bot didn’t know to map an utterance like “Move money from one account to another” to this intent. The best way to fix this is to include additional sample utterances to cover the various ways people may communicate that they want to transfer funds. The other area to look at is those intents that were mis-predicted as being appropriate. Make sure that the sample utterances used for those intents don’t conflict or overlap with utterances that should be directed to TransferFunds.

In the following examples, the bot may be having trouble as indicated in our test output. Slot values are important pieces of information that help the bot fulfill a user’s request, so it’s important that they’re accurately identified. In the Test Conversations section of the test framework, the columns Slots and Predicted Slots should match, otherwise there’s an issue. In our sample bot, conversation 13 indicates that there was a mismatch.

The following is the full test conversations matrix. As an exercise, you can try modifying the sample bot design to turn the failure results to successes. 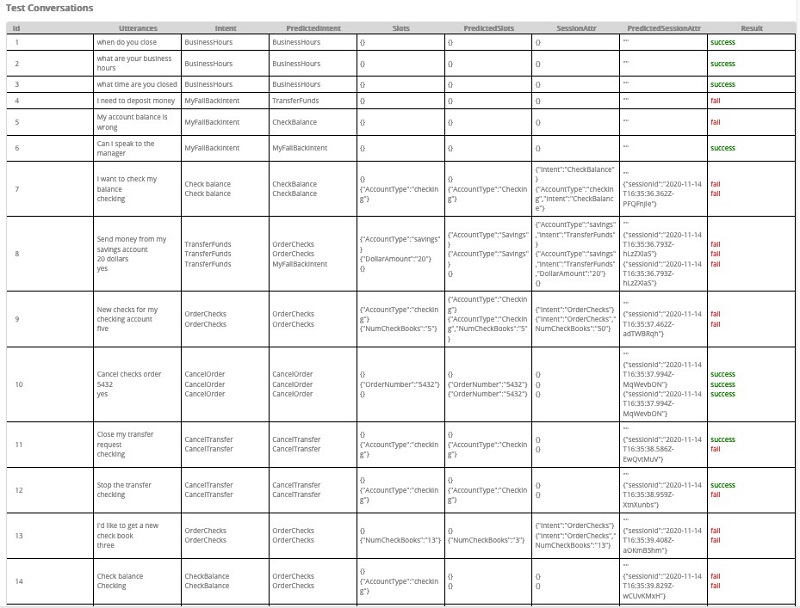 Having a test framework that enables chatbot owners to automatically run test cases that cover different conversation pathways is extremely useful for expediting the launch of a well-tested chatbot. This reduces the time that you have to put into testing a chatbot comprised of different intents and slots. This post provides an architecture pattern for implementing a test framework for chatbots built using Amazon Lex to get you started with an important capability that can accelerate the delivery of your conversational AI experiences. Start building your conversational AI experiences with Amazon Lex.

Shanthan Kesharaju is a Senior Architect at AWS who helps our customers with AI/ML strategy and architecture. Shanthan has over a decade of experience managing diverse teams in both product and engineering. He is an award winning product manager and has built top trending Alexa skills. Shanthan has an MBA in Marketing from Duke University and an MS in Management Information Systems from Oklahoma State University.

Marty Jiang is a Conversational AI Consultant with AWS Professional Services. Outside of work, he loves spending time outdoors with his family and exploring new technologies.