Creative video technology developer Blackmagic Design develops some of the most ubiquitous hardware and software in post-production. Its innovative approach to engineering and commitment to delivering affordable, high-quality solutions help creativity blossom. Among its latest advancements, Blackmagic Cloud, a new service launched at the 2022 National Association of Broadcasters (NAB) Convention, lets creatives work on the same projects in DaVinci Resolve from anywhere in the world. Built on Amazon Web Services (AWS), it uses cloud services including Amazon RDS for PostgreSQL, Amazon Elastic Container Service (Amazon ECS), and Amazon CloudFront.

“The new Blackmagic Cloud allows anyone to create a global post production workflow by connecting different DaVinci Resolve editors, colorists, visual effects artists, and audio engineers together. Each person can work on the same project and even the same edit timeline from different locations, even in different countries. It means an editor could be editing in Los Angeles and a colorist could be grading the same timeline in London. All at the same time!” – Grant Petty, CEO, Blackmagic Design

“One of the reasons this new workflow is possible is due to AWS. Blackmagic Cloud takes advantage of AWS because it provides the security, reliability, and scalability of AWS. I am so excited to see what our customers will be able to do with Blackmagic Cloud!” – Grant Petty

Blackmagic Cloud is the result of a long-standing partnership between Blackmagic Design and AWS. As the industry navigated a shift to remote work, the two companies worked rapidly behind the scenes to deliver remote collaboration capabilities on DaVinci Resolve. These efforts quickly resulted in the remote production of a feature film on AWS, which was completed in late 2020.

Around the same time, Blackmagic Design began exploring how it might simplify the DaVinci Resolve Studio installation on Linux, previously a pain point for some users getting started. In Q1 2021, Blackmagic Design launched a CentOS-based Amazon Machine Image (AMI) on the AWS Marketplace with DaVinci Resolve 17 Studio installed and packaged alongside NICE DCV with the required drivers for pixel streaming. With this development, users with a software license can quickly begin working on DaVinci Resolve Studio on AWS.

Blackmagic further advanced cloud functionality for the software with the release of DaVinci Resolve Studio 18, announced at NAB 2022. Providing users with greater flexibility, the new version debuted a DaVinci Remote Monitoring feature, which allows creative teams of all sizes to use an Amazon Elastic Compute Cloud (Amazon EC2) G4dn or Amazon EC2 G5 high performance GPU-based instance to stream a high-fidelity, color accurate H.265, 4:4:4, 10-bit video directly from DaVinci Resolve running on AWS to nearly any monitor around the world. 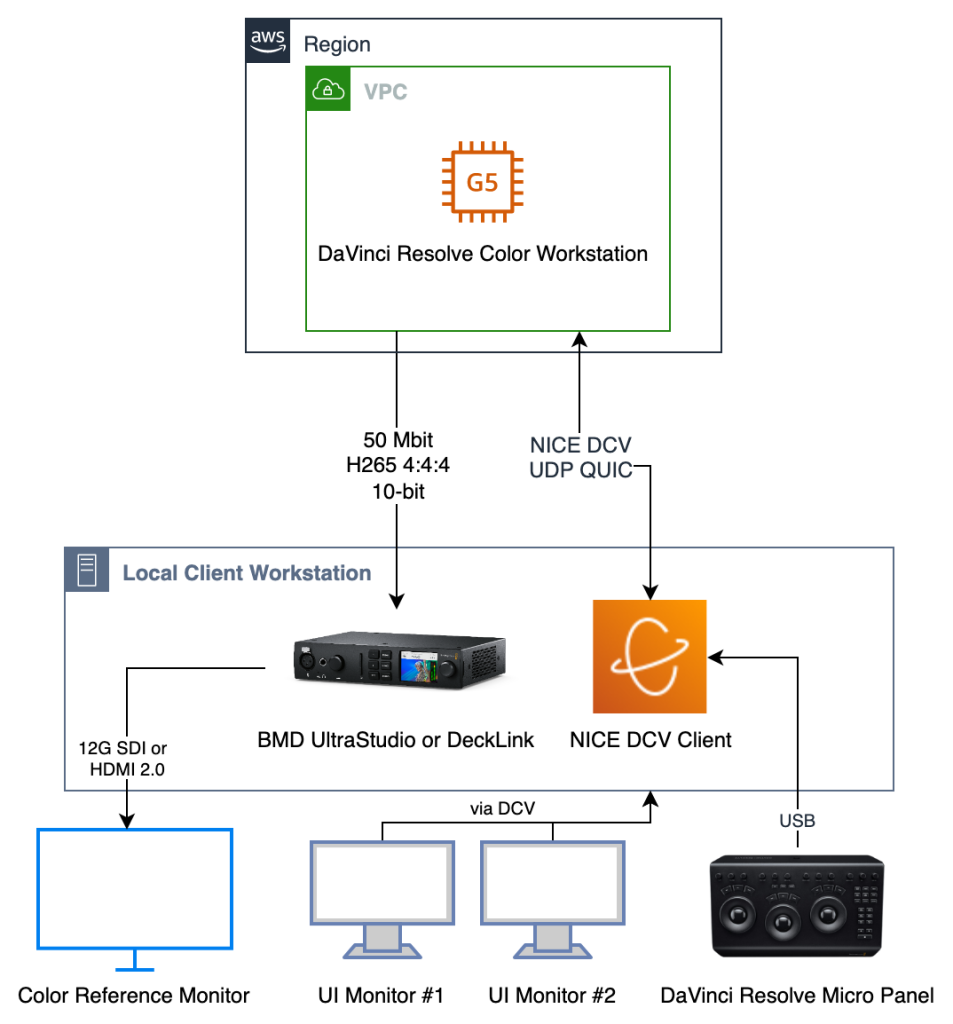 The DaVinci Resolve Remote Monitoring application combined with a high-performance remote desktop solution, such as NICE DCV, enables live 4K video streaming to system monitors. It also allows users to connect a DaVinci Resolve Control Surface, such as a Micro Panel, and get a color accurate HDMI or HD-SDI video feed delivered via a compatible UltraStudio or DeckLink Card on the client workstation. Editors and colorists can then work in their preferred ways.

Note: To achieve 4:4:4 color, a compatible NVIDIA card on the receiving workstation is required. Check out NVIDIA’s video decode support matrix for details.

“The future workflows and tools of visual storytelling are changing. The creative forces in school today will work in a vastly different landscape of tools and workflows from creatives of the past 30 years.” – David Hoffman, Business Development Manager, Blackmagic Design

“Cloud-based tools and workflows are just coming into existence. High school and collegiate creatives will know these emerging tools and processes as the standard of their craft when they enter the workforce. Blackmagic Design and AWS would like to empower the voices of the creatives to tell their story today and allow us an insight into what their, and our industry, future holds.” – David Hoffman 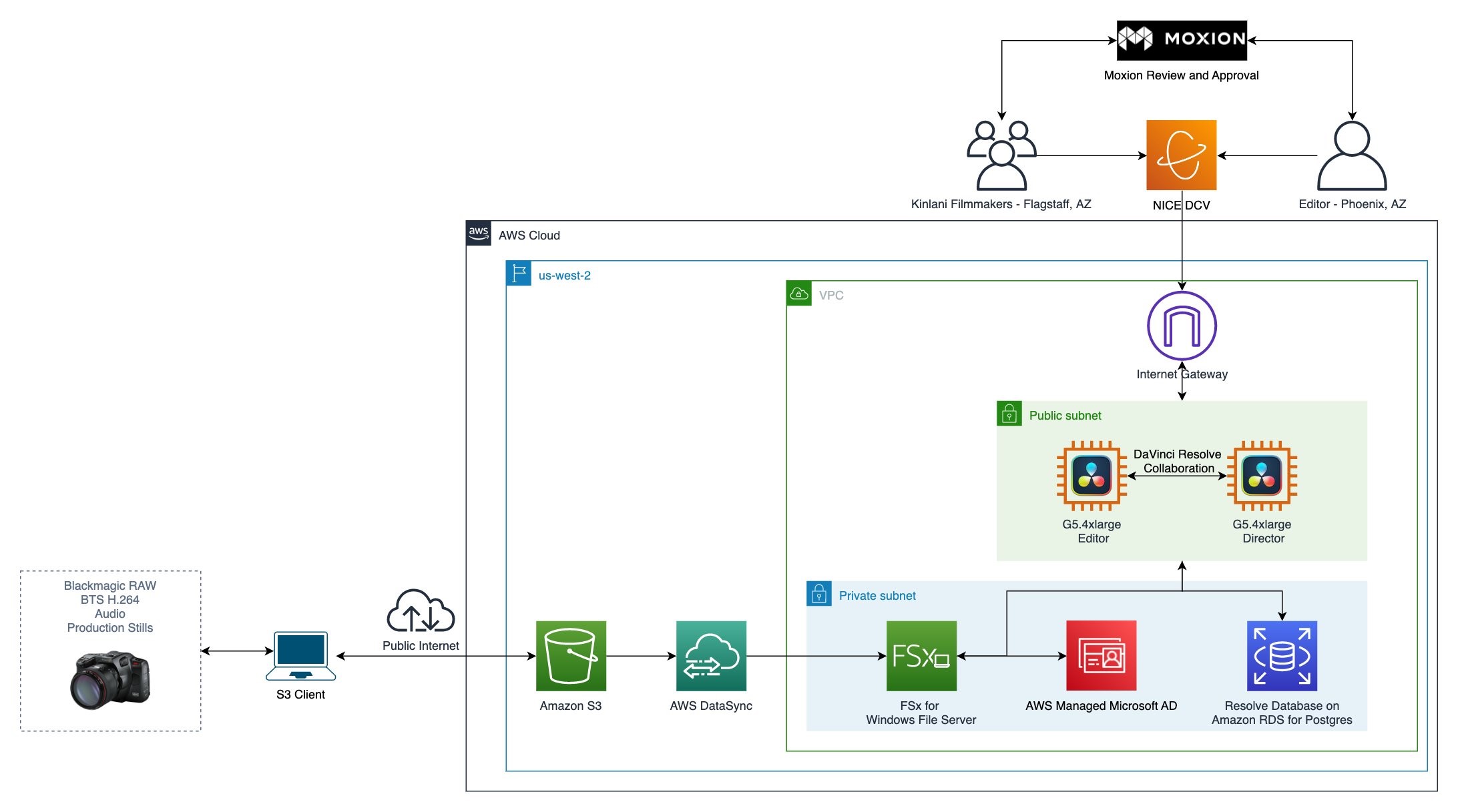