For RepricerExpress, the best place to run Microsoft workloads is on AWS

Lucid Interactive company RepricerExpress, sister application of automated feedback solution FeedbackExpress, enables over 4,200 Amazon Marketplace and eBay sellers to set and customize automated pricing strategies, made what seemed to be a reasonable assumption: Microsoft infrastructure like Windows and SQL Server should run best on Microsoft Azure.

While reasonable, the assumption was wrong.

Though RepricerExpress started on Azure, they discovered that migrating their Microsoft workloads from Azure to AWS delivered better performance, lower cost, and greater ease of use. As a result, declares Damian Elder, a DevOps engineer at RepricerExpress, switching to AWS has allowed the company to “provid[e] a better customer experience.” Let’s look at why.

RepricerExpress serves over 4,200 sellers across 20+ Amazon and eBay channels, repricing more than 50 million SKUs a month and supporting $60 million in customer sales each week. It’s a business that has been booming, which was great for RepricerExpress but bad for their initial cloud infrastructure, Microsoft Azure. 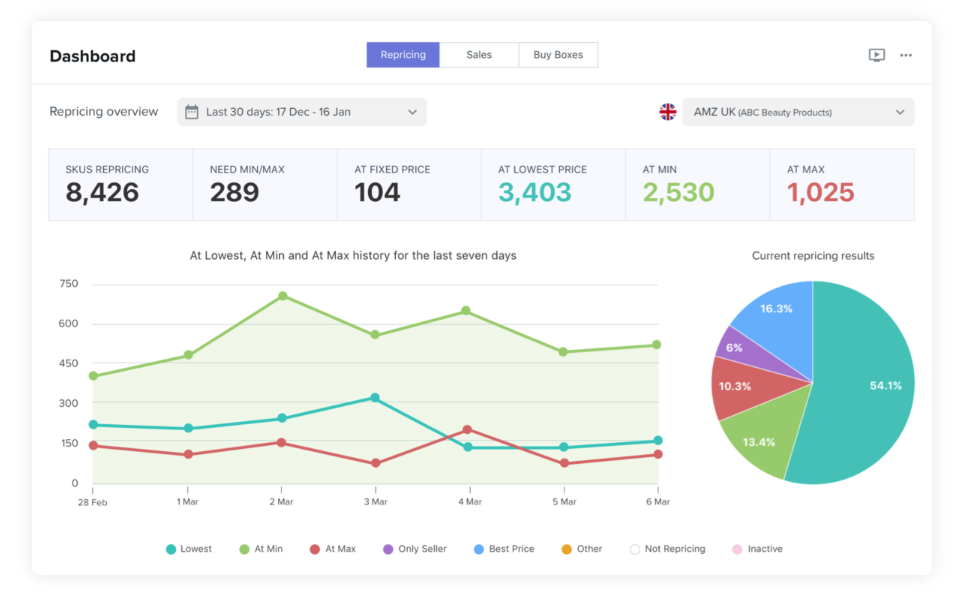 When the company first launched on Microsoft Azure, says Elder, “We didn’t expect as much growth in our user base and data volume as we ended up experiencing.” How much growth? According to Chris Dunne, a marketing executive at RepricerExpress, “In just five years, we’ve gone from receiving about 5,000 price notifications a day to over a billion a month. We expect our customer base to double in the next year, which will bring us up to about 320 million daily price notifications and 12 terabytes of data on our servers.”

While that growth was good for RepricerExpress, Microsoft Azure struggled to keep pace. Compounding this problem, RepricerExpress had a contract renewal coming due for Azure, and Microsoft was due to raise their pricing by 20 percent. With poor performance at rising costs, RepricerExpress started to look for alternatives, ultimately picking AWS: “Our analysis found that the AWS offerings for Microsoft tools are really quite mature and that AWS would be a better platform than Azure for that kind of growth,” says Dunne. The company also worried that “our competitors started to market that their applications were hosted with AWS,” continues Dunne, potentially putting RepricerExpress at a disadvantage in the market.

Powering their Microsoft workloads on AWS

When considering how to go about the migration, RepricerExpress erred on the side of simplicity. The company deployed new servers on AWS, migrated their Windows Server and Microsoft SQL Server environment onto an AWS infrastructure that includes Amazon Elastic Compute Cloud (Amazon EC2) z1d instances, which use a custom Intel® Xeon® Scalable processor with a sustained all core frequency of up to 4.0 GHz, the fastest of any cloud instance, to deliver high single-thread performance. The company is also using Amazon Simple Queue Service (Amazon SQS) for queuing pricing information, Amazon Elastic Block Store (Amazon EBS) with Provisioned IOPS Solid State Drive (SSD) for high-performance block storage, and AWS Directory Service for extending Microsoft Active Directory to the AWS Cloud. RepricerExpress also used a VPN connection between Microsoft Azure and AWS to migrate customer data using bespoke processes designed in house.

AWS has supported Microsoft workloads in the cloud for longer than Microsoft has, so it’s perhaps not surprising that customers like RepricerExpress find they work even better on AWS. Speaking of running Microsoft Active Directory on AWS versus Microsoft Azure, Elder asserts, “Because it’s a managed service on AWS, it’s much simpler to run Active Directory on AWS than on Azure.” Not only is it “an easy migration to AWS from Azure,” he continues, it’s actually “easier to manage your Microsoft licensing on AWS.”

Across the board, it has been straightforward for RepricerExpress to switch from Microsoft Azure to AWS, says Dunne, including personnel training. Whether through detailed online documentation, a readily available account manager, or the AWS developer support plan, “AWS [has been] a massive help,” says Dunne.

This same simplicity from embracing AWS has RepricerExpress enthusiastic about exploring other AWS services. For example, the company plans to use Amazon Relational Database Service (Amazon RDS) and Amazon Timestream. Why? Ease of management, for one thing: “We’re planning to reduce our Amazon EC2 fleet by shifting workloads onto Amazon RDS. The most exciting thing there is that it’s a managed service, so we won’t have to worry about updates and all the other maintenance overhead for our Windows virtual machines (VMs),” describes Elder. “We’d also like to get to the point where we are injecting all the data we handle into Amazon Timestream, so we can analyze price changes per product per day and provide trend forecasting for our customers.”

In addition to being easier to run Microsoft workloads on AWS, the flexibility of AWS is enabling RepricerExpress to find an even better fit between their architecture and its applications. According to Elder, “By taking advantage of the high-performance SSD option for Amazon EBS, we designed a storage platform that aligned closely to the data access patterns of our applications. This Amazon EBS option will help us reduce costs and deliver even stronger application availability.”

Which brings us back to where we began: cost savings. The original impetus behind RepricerExpress’ evaluation of AWS was the Microsoft’s 20 percent price hike, but in working with AWS the company has found several ways to save money that go beyond avoiding such price inflation. First, RepricerExpress discovered they could dramatically decrease data transfer costs with AWS. How? By eliminating the cost of pushing price notifications from AWS to RepricerExpress’ Azure virtual machines. “Moving from Azure onto AWS reduced our outbound bandwidth costs by about $60,000 a year,” notes Elder. Nor did the cost savings end there: “We cut our costs still further by putting most of our servers on one-year Amazon EC2 Reserved Instances, for a 15 percent discount,” he continues.

Nor are they done.

Working with AWS and using the AWS Pricing Calculator and AWS Cost Explorer, RepricerExpress is finding costs and savings easier to calculate and understand on AWS than they ever were with Azure. “Billing and cost monitoring can be quite complex on Azure because you have to take so many factors into account,” suggests Elder. “Using the AWS Pricing Calculator, it’s very straightforward to understand how discounts apply and how much you’re actually saving. We’re also looking forward to using AWS Cost Explorer to understand what it costs per customer to operate our app, rather than relying on averages.”

To see how your organization can, like RepricerExpress, save money while driving innovation and improving performance, please continue to join me as I highlight companies on their modernization journeys onto AWS. As you do, I hope you’ll also ask the question, what’s your plan for moving off Microsoft Azure? Or off Oracle? Or whatever old-guard technology keeps you from modernizing to better care for your customers?

Please consider letting AWS help you assess how your company can get the most out of cloud. Join all the AWS customers who trust us to run their most important applications in the best cloud. To have us create an assessment for your Microsoft Azure applications (or all your applications), email us at WhatsYourModernizationPlan@amazon.com, and please consider joining the conversation using the #WhatsYourModernizationPlan hashtag.