Load shedding is the practice of sacrificing enough application traffic to keep partial availability in the presence of an overload condition. Used in conjunction with strategies like load balancing, load shedding helps applications support service level agreements (SLAs) when increased traffic overwhelms available system resources. While the cloud’s elasticity reduces the need for load shedding, it is still necessary when application initialization (or cold start) times reduce the effectiveness of elasticity. Load shedding is a simple concept often implemented with one shedding behavior in mind: “use it or lose it”.

At Amazon, we use a load shedding strategy to avoid overload in our own systems. It is discussed in detail in The Amazon Builders’ Library. In this blog, we will detail an automated load shedding implementation using native AWS services including Amazon Route 53, Amazon CloudWatch, Amazon EventBridge, AWS Lambda, and Amazon Simple Queue Service (SQS).

In the DNS-based approach, we use Route 53 to manage traffic destinations. We configure a weighted routing policy with a primary and secondary endpoint. Under normal load, we configure 100% of the traffic to the primary endpoint. In an overload situation, we increase the percentage of the traffic routed to the secondary endpoint and reduce the percentage routed to the primary. While this approach sheds load during an overload situation, the load shedding only takes effect after expiration of the DNS’ time to live (TTL) when clients refresh their DNS records against Route 53.

To automate this behavior, we built a serverless ALB Target Group Load Shedding (ALB TGLS) solution that performs load shedding via the load balancer based approach. The solution uses native AWS services including Amazon CloudWatch, Amazon EventBridge, AWS Lambda, and Amazon SQS. We built it with flexibility and configurability in mind to fit various use cases.

Let’s dive into the high-level architecture of the ALB TGLS solution (see Figure 1 below).

Each customer use case may require different metrics, threshold, and breach intervals for triggering load shedding. You will find standard ALB CloudWatch metrics here. Most metrics that support the “TargetGroup” dimension will work well. However, we recommend production testing.

Here we examine some CloudWatch metrics for common use cases:

Here are some options for configuring the ALB Shedding Target Group.

To deploy this solution, you require the following:

You can access the ALB TGLS Solution code on GitHub here. To simplify deployment, we created one app with an AWS Cloud Development Kit (CDK) stack. The CDK stack, ALBMonitorStack, deploys the ALB TGLS Solution for load shedding. This includes all required AWS Lambda functions and an Amazon SQS Queue. Secondly it deploys a demo CloudWatch Alarm and EventBridge rule. The default CloudWatch metric used in this demo is the sum of RequestCountPerTarget. The metric has a configurable threshold defaulted to 500.

Provide the appropriate parameter values. The following parameters are required:

Provide the appropriate parameter values. The following parameters are optional: 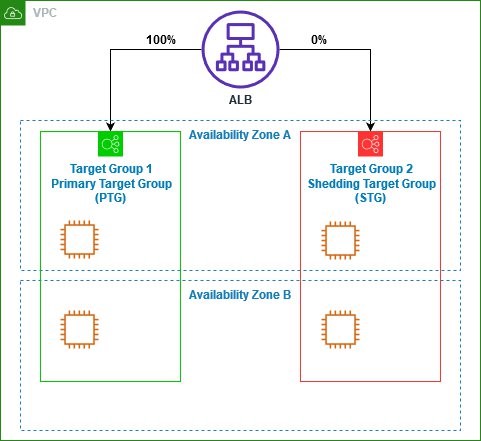 We deployed the ALB TGLS Solution in an AWS account. In our scenario, the CloudWatch alarm breaches when Sum of RequestCountPerTarget exceeds 50,000 for 1 of 1 data points within 1 minute. We chose this number as we know each EC2 backend instance will sustain 60,000 requests per minute. We want load shedding to occur before load reaches 60,000 requests per minute. Load shedding and restore actions will happen at 5 percent increments. The load shedding will give the PTG environment time to scale up or the increased load to subside, whichever comes first. The primary goal is to ensure no overload of our primary environment.

To load test the environment, we use the Distributed Load Testing on AWS Solution from the AWS Solutions Library. We deployed the solution using the provided AWS CloudFormation template. The solution creates a user-friendly UI hosted on Amazon CloudFront to configure load tests. As seen in Figure 4, the load testing solution is configured to ramp up 10 container tasks over 20 minutes. Each task is configured with a request concurrency of 30, sustained for 40 minutes – meaning the test will run 1hr in total. 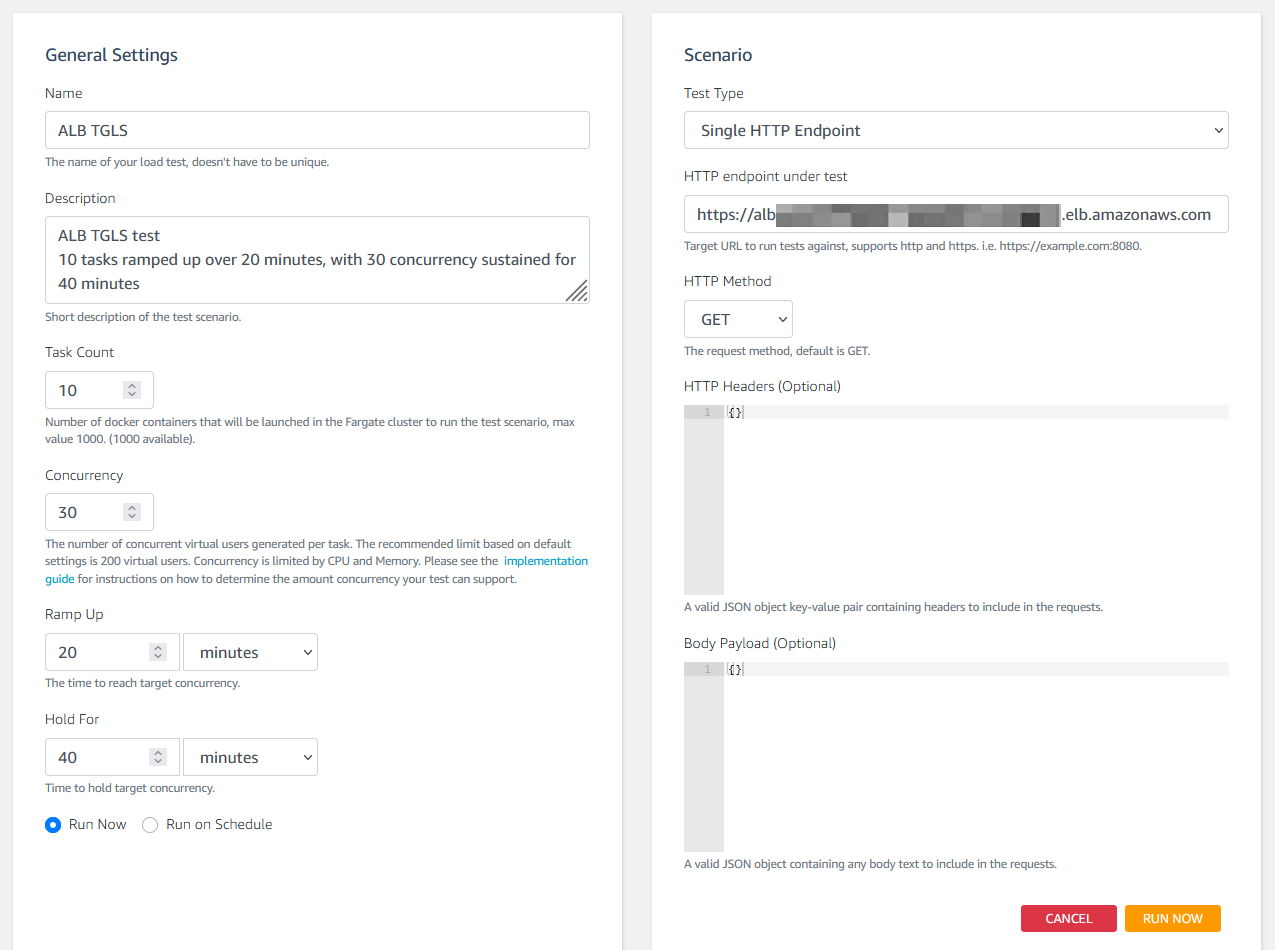 Fast-forward to after the load test completes and let’s look at what happened. The graph in Figure 5 below shows PTG traffic in Blue and STG traffic in Orange. As the CloudWatch Alarm breaches, the graph shows the ALB TGLS Solution load shedding this traffic from the primary to the secondary target group. Traffic is Shed and Restored at the configured percentage intervals, giving the primary group time to scale and increase its capacity without being overloaded.

We’ve annotated each interesting reference point in Figure 6 below…

The PTG environment scaled up at 17:50 and although the PTG experienced delayed scaling, the load shedding actions prevented PTG from being overloaded. As seen in Figure 7 below, EC2 Autoscaling increased the PTG instance count from 2 to 4; whilst at the peak ALB TGLS configured the ALB weighted target group load shedding to split 75% of the traffic load to the PTG, and 25% to the STG at the peak. 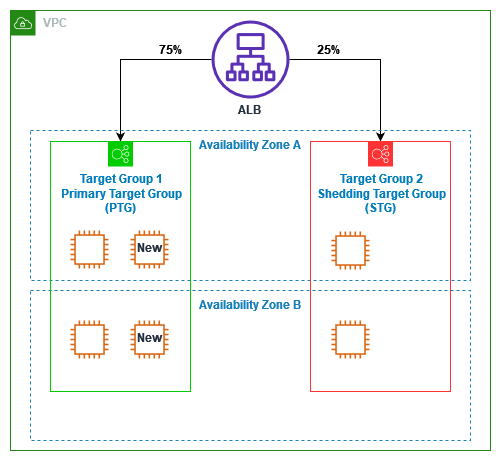 Earlier we stated the PTG environment can handle a peak of 60,000 Requests per Target. As seen in Figure 8 below, the RequestCountPerTarget metric never breached the 60,000 limit. PTG did however come close with a 57,846 RequestCountPerTarget data point. To tune the solution and create a larger safety margin, we can: 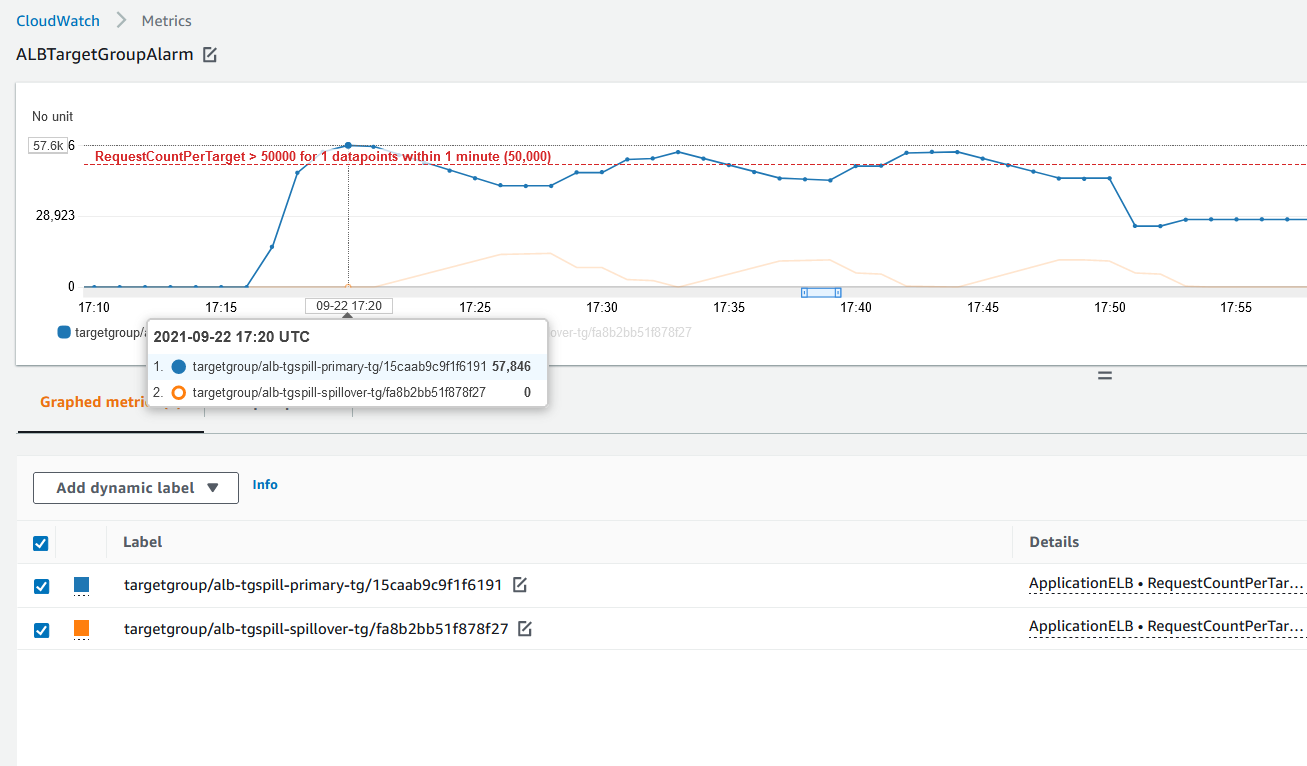 Additionally, we covered how to deploy the solution into your AWS Account using the Amazon Cloud Development Kit template and showed the solution in action.

It’s recommended to perform thorough real-world load tests with your unique traffic patterns before deploying to any production environment. Tuning and testing the available parameters is critical to achieve a production ready solution.

Eugene is a Sr. Solutions Architect at AWS based in Chicago. Originally from Cape Town, South Africa, he works with AWS customers to architect solutions aimed at achieving their desired business outcomes. In his spare time you can catch him spending time with his wife and daughter – this usually means having a braai and eating too much biltong.

John is a Sr. Solutions Architect at AWS based in Texas. He enjoys spending time with his wife and two sons, reading, coding projects, little bits of carpentry, a bit of robotics, and hates jogging but does it anyway.

Michael is a Principal Solutions Architect at AWS based in Chicago. When away from work, he spends his time running and keeping his kids from destroying the house.