In most cases, customers use a single CDN such as Amazon CloudFront to deliver online video streaming to their viewers. However, in some cases, you may choose to use a multi-CDN deployment for specialized reasons such as requiring parallel redundancies on all parts of your media-delivery architecture, or using a specific CDN to cover a geography where they have unique coverage. While using a multi-CDN deployment can offer certain advantages, it can also introduce challenges such as incremental load on your origin that require additional thought or different solutions.

This blog details how Amazon CloudFront’s recently announced Origin Shield can enhance your multi-CDN media workload by minimizing the load on our your origin. This reduction in origin load can improve your origin’s availability, reduce its operating costs, and even improve general performance for your viewers. Some customers using CloudFront Origin Shield in production have reported origin load reductions and origin fetch p90 latency reductions as high as 57% and 67% respectively. Click here to learn more about edge networking with AWS.

Before diving deeper into the multi-CDN example, it is best to first establish a foundation for what CloudFront Origin Shield is and how it can even optimize workloads that are using CloudFront as its sole CDN for viewer delivery.

Not all origins are alike. For example, some are more sensitive than others to the number of requests they can handle. This is particularly true for origins running processes that require more compute per request, such as just-in-time packaging, or for origins on-premises that are not able to scale as easily as those in the cloud. Since 2016, CloudFront has helped protect origins from excessive origin load by providing regionalized mid-tier caching at no additional cost to everyone by default. These Regional Edge Caches automatically protect your origins and collapse requests within the region they cover (Figure 1). 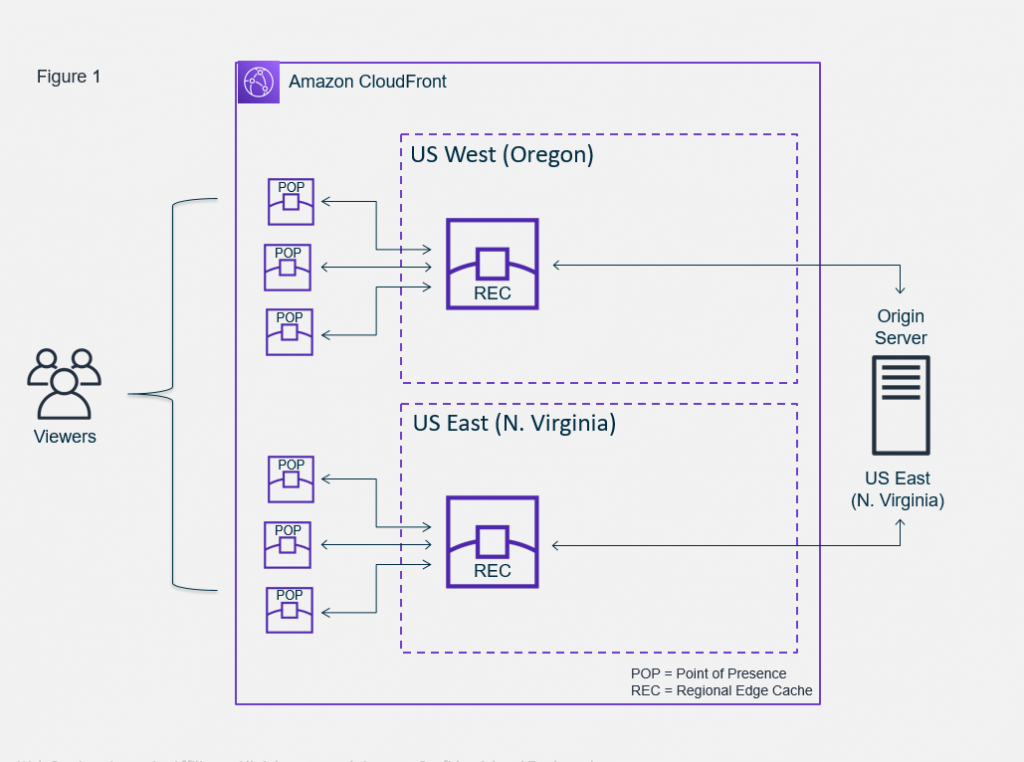 For workloads that span across multiple regions or geographic areas covered by more than one Regional Edge Cache, you may want to further optimize the load on your origin. Now, with just two clicks you can configure one of CloudFront’s Regional Edge Caches to become your CloudFront Origin Shield. Origin Shield works with any HTTP-accessible origin, such as AWS Elemental MediaPackage, AWS Elemental MediaStore, Amazon S3, Amazon EC2, or any other third-party or on-premises streaming origins.

CloudFront Origin Shield provides a centralized caching layer that sits in front of your origin to help increase CloudFront’s cache hit ratio and collapse simultaneous requests for the same object coming across multiple regions. As a general best practice, you should always choose the Origin Shield Region that is closest to your origin. 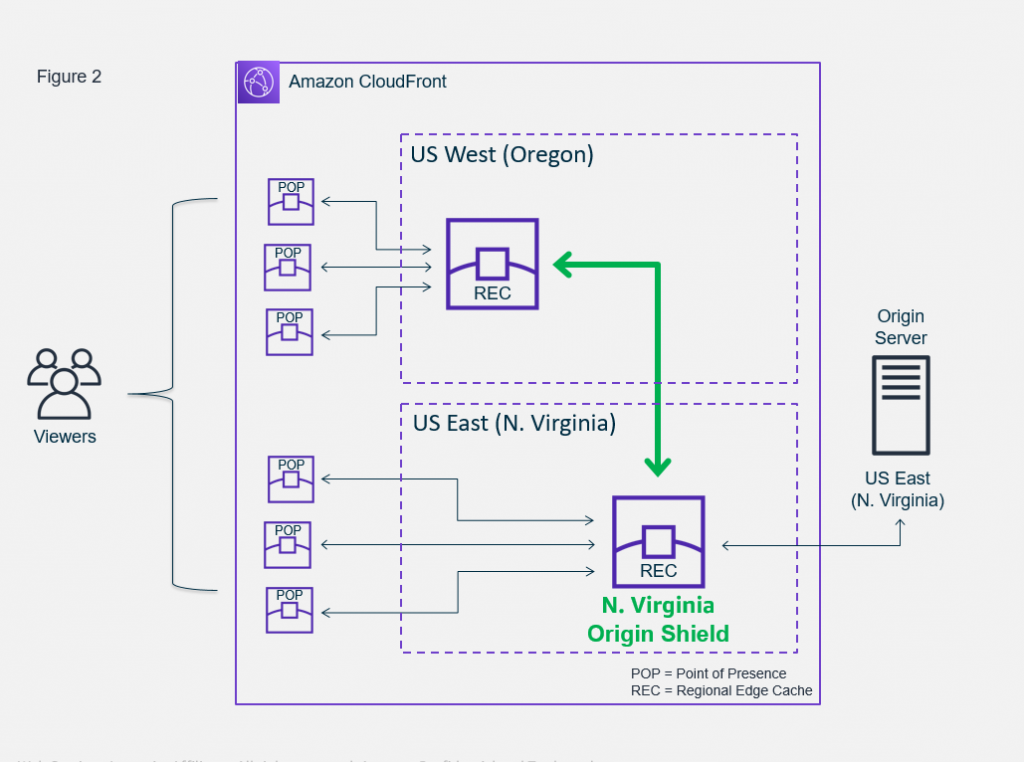 Origin Shield can be easily incorporated into any CloudFront workload. However, the most notable benefits are seen among workloads that have viewers spread across multiple regions, involve on-demand processes such as just-in-time packaging or on-the-fly image transformations, or on-premises origins with scaling or bandwidth constraints.

Bedrock Streaming, a subsidiary of M6 Group in France, stated, “We enabled Origin Shield on our live linear channels served by CloudFront and immediately saw our origin’s load from those channels reduce by more than 26% without having to do any architectural changes. The additional origin protection we’re getting, plus the origin cost savings, is well worth Origin Shield’s low-cost pricing.” – Yann Verry, Head of Operations.

While Origin Shield can optimize your origin load when using CloudFront to deliver content directly to your viewers, Origin Shield can also be useful in serving content to other CDNs in a multi-CDN deployment such as a large live event.

Over-the-top (OTT) video delivery for live events such as the NFL Super Bowl continually grow in size each year. Content providers for events of this scale sometimes use multi-CDN strategies to deliver these mission-critical events. Reasons for using a multi-CDN architecture vary between providers but are generally rooted in establishing extra redundancy or enhancing performance in a geographic region where one CDN might have specialized coverage. Recently, one of our colleagues, Achraf Souk, wrote a multi-part blog series about the benefits and trade-offs of using multi-CDN for video streaming. We encourage anyone reading this blog to also check out his posts on how to use multi-CDN for video streaming and how to score and balance traffic between multi-CDNs.

For our purposes here, let’s assume you are using a multi-CDN strategy including three CDNs – Amazon CloudFront and two others which we will refer to as CDN 2 and CDN 3. With multiple CDNs involved, we often see each one pulling content directly from the media origin server (Figure 3).

As mentioned before, while there may be specific reasons to use a multi-CDN architecture, there are several trade-offs to consider when compared to a single CDN approach such as increasing origin load, increased origin cost, operational overhead, and lack of feature parity across CDNs. These trade-offs are explained below:

If you are using or considering a multi-CDN architecture, CloudFront Origin Shield can help minimize these trade-offs by using a single CloudFront distribution to deliver content to both your viewers and downstream CDNs. This is achieved by configuring your other CDNs to use CloudFront as their origin and send their origin fetches to CloudFront’s Points of Presence (Figure 4). 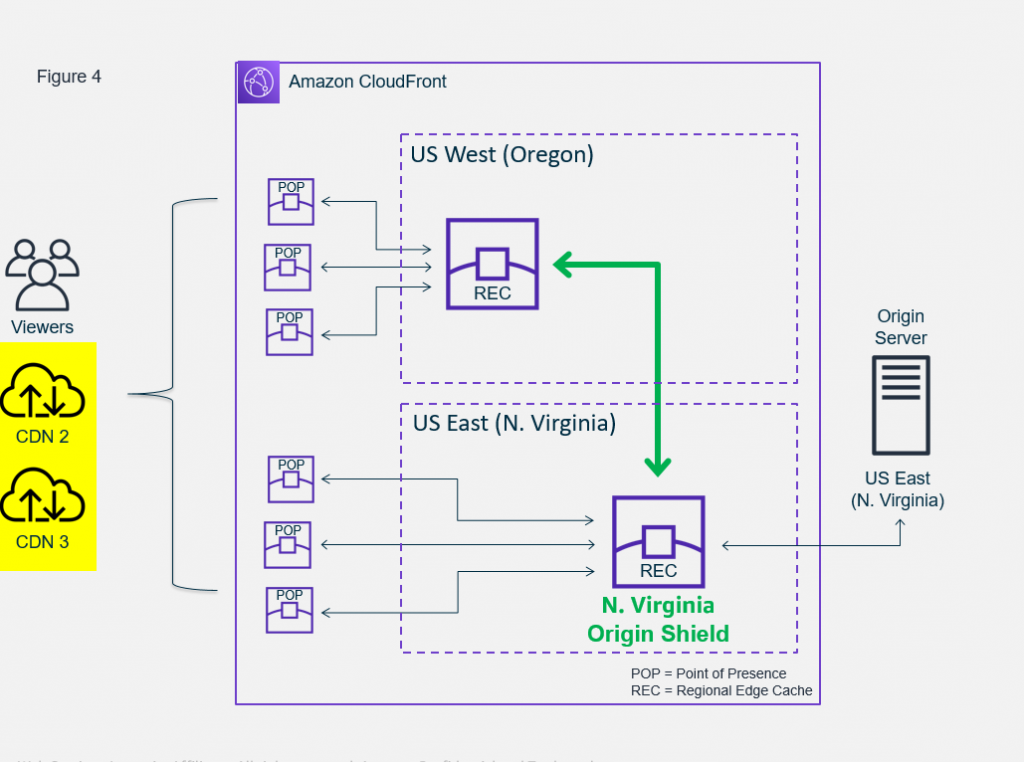 Just like previously described, now all requests will be handled by CloudFront’s Points of Presence which will naturally use CloudFront’s Regional Edge Caches and then be routed through the Origin Shield location before going to your origin. This arrangement provides a number of advantages that helps minimize the trade-offs of using a multi-CDN architecture:

Customers using CloudFront Origin Shield in production have seen notable improvements in their overall cache-hit ratio, origin load, and network performance for origin fetches. For example, users have seen as much as:

How to set up Origin Shield in your multi-CDN deployment

CloudFront Origin Shield is incorporated into the configuration of a CloudFront distribution’s Origin settings. It is straightforward to set up and can be easily introduced into your multi-CDN architecture with minimal changes. 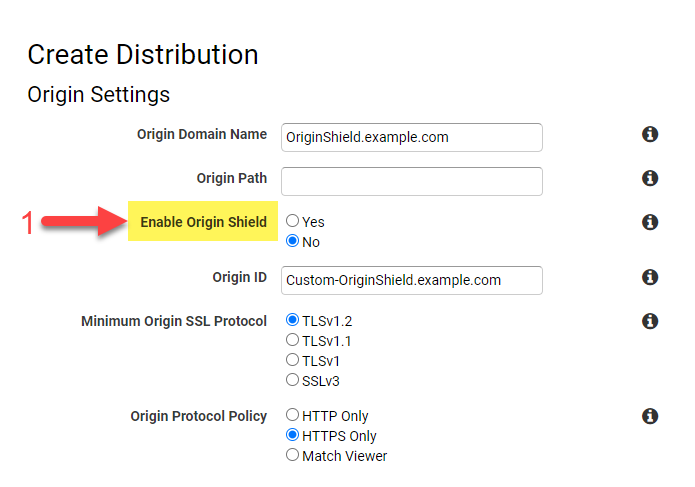 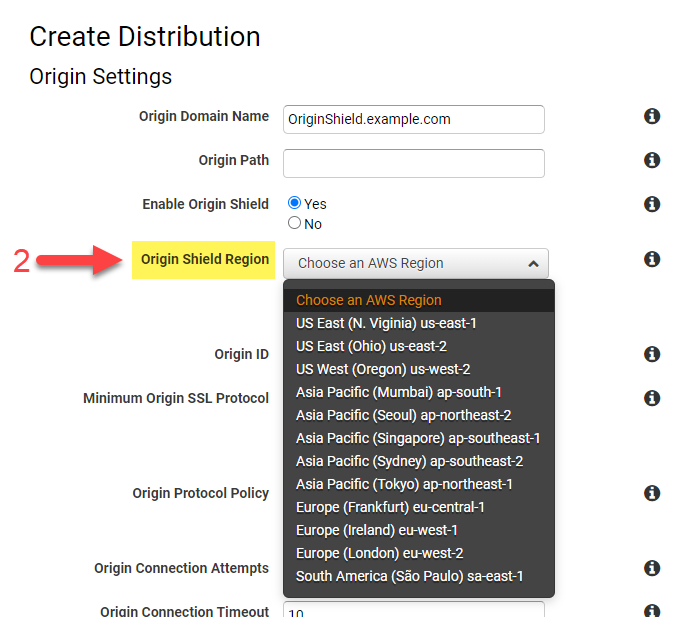 Note to readers: When choosing your Origin Shield Region, ALWAYS choose the Region that is closest to your origin for the most optimal performance.

At the time of this blog, CloudFront offers Origin Shield in twelve AWS Regions but more locations may be added in the future. If your origin is located in one of the AWS Regions shown in the drop down selection, choose the same Region for Origin Shield. If your origin is located in an AWS Region not shown in the drop down selection, refer to CloudFront’s Developer Guide for recommendations on which Origin Shield location to use based on AWS and CloudFront’s network topology.

For origins located outside of AWS Regions such as an on-premises origin within your own datacenter, choose the Origin Shield Region with the lowest latency connection to your origin. You can base your selection on our recommendations depending on which AWS Region is closest to your origin. Or, you could setup EC2 instances in a few different AWS Regions that are close to your origin and run some tests using ping to measure the typical network latencies between those Regions and your origin.

Step 3 – Update DNS: Multi-CDN architectures often use a DNS load balancer to distribute viewer traffic across CDNs each with its own unique CNAME to receive the awarded traffic. In a multi-CDN architecture with CloudFront Origin Shield, you would use CloudFront’s endpoint as the origin to the other CDNs. For an added level of visibility you might want to consider using a custom CNAME for each CDN’s CloudFront endpoint.

The reason to use different CNAMEs to distinguish traffic between its downstream source is to give you additional visibility and reporting into the performance of each CDN in your multi-CDN architecture.

Step 4 – Test, confirm, and monitor: As with any workload, it’s important to test your architecture in a pre-production environment before switching your production traffic to the new architecture. As part of monitoring best practices for a multi-CDN architecture, we recommend using CloudFront’s additional logging & reporting capabilities for maximum visibility. CloudFront provides several options to gain transparency into the performance of your multi-CDN architecture by way of access logs, real-time logs, and AWS CloudWatch metrics.

CloudFront provides access logs free* of charge and can be enabled in just a few clicks (*standard Amazon S3 storage charges do apply). If you set up unique CNAMEs for each CDN origin endpoint as described in Step 3, your access logs will show you which domain the request resolved to on your CloudFront distribution in field 16 ‘x-host-header’.

Additionally, you might consider using CloudFront real-time logs and CloudFront’s eight additional, real-time AWS CloudWatch metrics to create active dashboarding, monitoring, and alarms for the operational health and performance of your CDN infrastructure such as overall Cache-Hit Ratio and 4xx and 5xx Error Rates.

Notes regarding high-availability and stacking CDNs

Using a CDN as an origin to other downstream CDNs requires additional scrutiny over the availability track record, redundancy, and scalability of the CDN providing the origin shield service. CloudFront and its Origin Shield feature are built according to AWS’ high-availability best practices and are fault tolerant and redundant.

CloudFront as a service is able to handle massive volumes of traffic and balance the load across its hundreds of Points of Presence. As a best practice to better ensure the availability of you application to your end viewers, we do not recommend enabling a third-party’s origin shield or centralized dedicated cache when using CloudFront as their origin. Doing so may consolidate all third-party CDN requests made to CloudFront on a single CloudFront Point of Presence. By naturally allowing another CDNs resolvers to distribute the load to its nearest CloudFront Point of Presence (POP) you better safeguard your workload from being potentially impacted by a single-POP availability event.

We’re very excited about the release of Origin Shield and the incremental origin protection, origin offload, and reduced origin costs it can provide you whether using CloudFront as your sole CDN or as part of a multi-CDN setup. Please refer to CloudFront’s webpage for Origin Shield Pricing and our Developer Guide for more information on how to estimate the monthly cost of Origin Shield.

If you are interested in using Origin Shield for a multi-CDN architecture, and have discounted pricing, contact us or your AWS sales representative for more information. Additional charges may apply.