Hour of Code Round-Up, Plus One Student’s Impromptu Coding Success

Brushed-up coding skills. A first encounter with computer science. A lesson in persistence. This year’s installment of Hour of Code was another success for Computer Science Education Week and Code.org – and for the future of women and underrepresented minorities in technology.

Last week, tens of millions of teachers and students from over 180 countries logged into Code.org’s portal to participate in interactive Hour of Code activities. This marks progress in a global movement to demystify coding as a pathway for students of any socioeconomic background or gender.

Behind-the-scenes, the security of participants’ personal data was paramount. Code.org relies on AWS services, including AWS CloudTrail, AWS Certificate Manager, and AWS Identity Access Management, for security solutions. This frees up more of Code.org’s capacity to focus on its mission.

On-site at schools, more than 350 Amazonians from around the globe stood ready to help almost 7,000 students learn how to use programming concepts to meet gaming objectives. It was also an exercise in collaboration, problem solving, and persevering through difficult tasks. 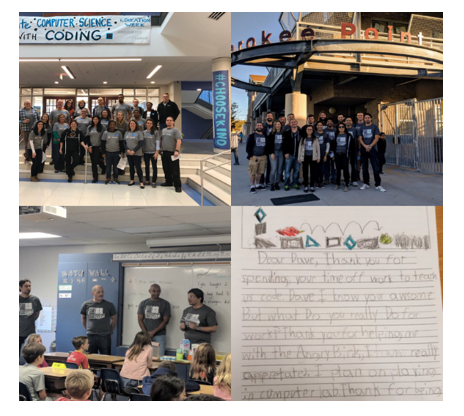 Among the modules on Code.org’s site, Game Development with DynamoDB attracted over 150,000 players. The gamified learning tool was the brainchild of AWS Educate, Amazon Future Engineer, and CodeCombat, and employs the power of Amazon DynamoDB.

Students and staff were eager to share their feedback. When asked whether they would code again, all hands flew up in a room full of first graders. We also spoke with Mill Run Elementary School Principal, John Cornely, about the impact of Hour of Code on his student body – check out his response here.

One fifth-grader’s commitment to coding stood out. Philip Luca, an AWS digital marketing manager volunteering at Mill Run Elementary, shared his interaction with the student:

What did you observe about this student’s involvement at the Hour of Code?
I came by to offer my assistance and noticed he had advanced to the second stage of the game way ahead of the others. There were two 15-level segments, and he was already onto the second phase well before the hour was up. He then asked me if he could build a game for himself and others to play. I’d shown up prepared… but this really caught me off guard. 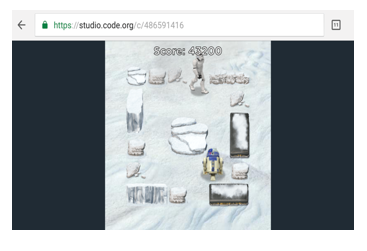 So, what happened next?
He figured it out. He sent me the link to his game on Code.org. I took a look and started to play. I got to 50,000 points, which I thought was pretty good. But he was ahead at 70,000. It was only fair that he beat me in his own game.

What was your initial reaction to the game?
It had me engaged for at least 15 minutes. I have plenty of coding experience in my background, but as this student showed, the level at which they are learning to code is unbelievable. At this pace they will be launching apps before high school.

Code.org org remains committed, with the support of Amazon, to making computer science accessible to a growing number of students, regardless of where they are located. To do this, Jeremy Stone, Code.org’s CTO, is exploring additional AWS services such as AWS WAF and AWS Lambda.

“We’ve thought about Lambda for serverless computing, as we feel like serverless computing is what the future looks like,” Stone says. “We’re also looking at WorkSpaces [a fully managed desktop-as-a-service solution] as, increasingly, we need resources that aren’t at an actual workstation. This is becoming more of a factor as we use more AWS services.”

For more on how AWS teams with the education community, visit our AWS Educate page, where students can sign up to begin their cloud journey at no cost.