Hearing “this voicemail box is full” on the other end of the phone line when trying to reach your member of Congress should not stop constituent voices from being heard. The U.S Congress has been facing this problem for a long time now, causing not only a challenge in community engagement, but also Congressional staff endless headaches. What if the solution was the use of a new serverless application? Article One is doing just that.

Article One identified a common problem facing House and Senate offices — old fashioned voicemail boxes clogged every day by never-before-seen call volume from citizens. Their solution, a “tool to radically improve phone-based engagement between citizens and their elected officials in Congress,” is now an approved cloud-based serverless application for the U.S. Congress. The team at Article One discovered that being heard by your member of Congress is made nearly impossible by a limited voicemail system and the lengthy and manual process Congressional staff follow to listen to each message, verify that the caller is in fact a constituent, categorize the call based on the request, and assign it to another staffer for further follow up. To put the amount of calls into perspective, “one week last February, for example, the Senate received 1.5 million calls in a single day.” The average voicemail system in a Senate office can only handle 300 voicemails before the voicemail is full, making it the job of a staffer to spend hours processing each voicemail before any action is taken.

How did the development team at Article One solve this problem? They went serverless. AWS Lambda instantly and affordably scales to meet the demands of callers to Congressional offices. Their architecture uses several AWS services including Amazon Polly, Amazon S3, Amazon EC2 with CloudWatch, and Amazon RDS to maintain the database. Together with other services, this new application helps citizens connect more directly with their member of Congress and seamlessly integrates with Congressional offices’ existing constituent management systems.

Now, for offices using Article One there is no “voicemail box full.” The application transcribes voicemails, verifies the caller’s identity, categorizes the call, analyzes the data, and delivers it instantly into constituent communications workflows. Congressional staff and members of Congress can spend more time listening to their constituents and less time on voicemails. Previously, it took staff an average of 5.5 minutes to handle a voicemail. With Article One, that drops to an average of 30 seconds. This extra Congressional capacity adds up quickly. In one 16-day pilot with a Colorado Congressman, Article One saved 20 hours of staff time — 2.5 full work days — which not only allowed staff to focus on higher priorities, but returned hundreds in value back to the cash and time-strapped office. 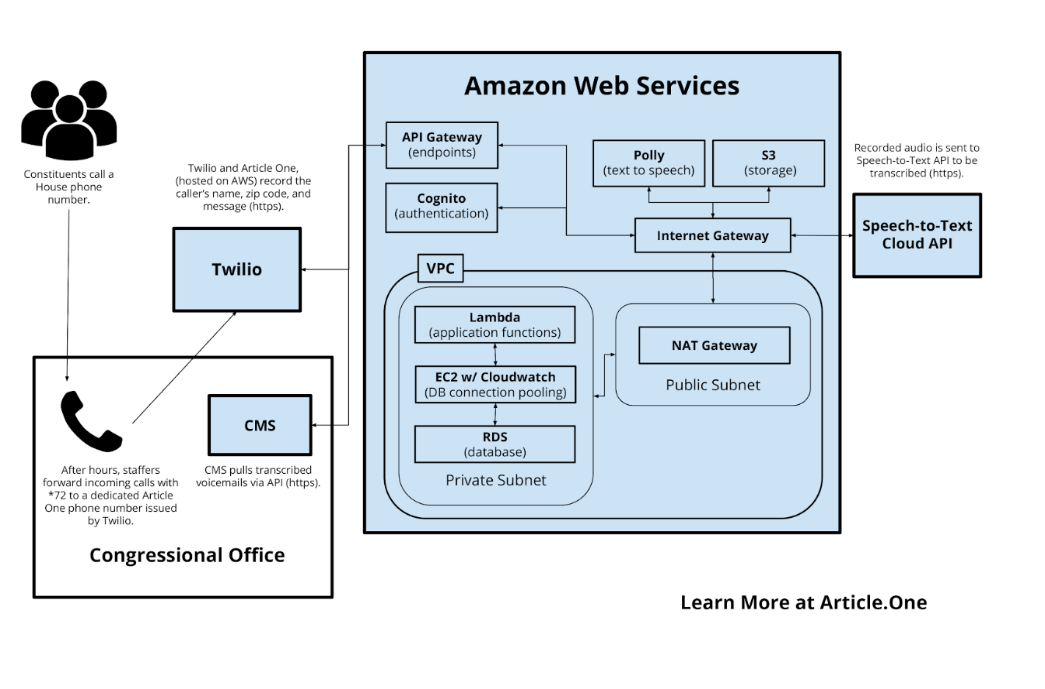 Article One is helping “maximize our efforts and focus on our constituents, as opposed to having to filter through a whole lot of noise,” said a Congressman from Arkansas. Chiefs of staff, who oversee the day-to-day operations of Congressional offices, are feeling the productivity boost made possible by serverless. “Article One is helping our office be far more efficient with every constituent call.” But it’s the newly empowered front-line staffers manning the phones seeing their jobs transformed the most. “Anyone who has been an intern or staff assistant in Congress knows the pain of logging constituent voicemails. Article One removes that pain for me and our team.”

By introducing the power of the cloud to an environment where it is most needed, more than thirty U.S. House offices representing more than 26 million citizens and growing now have an approved application running on AWS GovCloud (US).