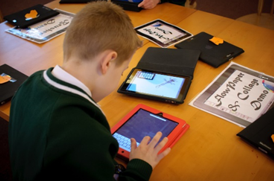 Cedars School of Excellence is small in size, but its digital achievements are anything but. A Scottish preparatory school, home to about 120 students and 20 staff members, Cedars is renowned for becoming the first school in the world to introduce a 1:1 iPad-based learning curriculum. And it’s unlocked many doors.

Fraser Speirs, head of IT and Cedars’ secondary school, has been the driving force behind its technology initiatives. He made the decision in 2013 to run Cedars’ device-management server, Jamf Pro, on Amazon Elastic Compute Cloud (Amazon EC2). Paired with an iPad, the AWS service provides reliability, durability, and elasticity, all within a tight IT budget.

Cedars has since used Amazon EC2 to effectively manage its complex iPad deployment, empowering students from across the school to effectively self-manage their iPads using a single EC2 instance. It is also using the service to run controller software for a new Wi-Fi network. Fraser has gotten even more creative with EC2 and is now using it for computer science classes. At one point, students used the service in concert with a Linux text editor to solve complex computer science problems.

Still, technology in the classroom can have its limitations. Some of Cedars’ critical applications weren’t compatible with the iPad, making it virtually impossible to deliver certain parts of the curriculum and testing in this way. Fortunately, Fraser learned of Amazon WorkSpaces, which addressed a host of needs. The cloud-based, desktop-as-a-service solution made it possible to access legacy Microsoft software required for a certificate-level Administration and IT class. It gave students access to a new range of software capabilities in the Windows version of Microsoft Office, and kept the course IT requirements manageable for a small staff. It even met the school’s physical constraints.

“We are really tight for space and there isn’t a square inch to spare. One of the big wins for Amazon WorkSpaces is that we don’t have to build a computer lab to satisfy the requirements of a single course. Our students [have] access from their iPads, in the classroom, at a reasonable cost,” according to Fraser.

Fraser also uses Amazon CloudWatch, which triggers an AWS Lambda script to queue up Amazon WorkSpaces right at the start of class. “We use every moment of class time to teach, rather than focusing on setting up technology,” he said. In addition to giving back valuable time, Cedars is also only charged when the tool is in use, making an already cost-efficient solution even more affordable.

Learn more about how the AWS Cloud can help transform your educational institution here.