In this post, I’ll show you how to build a continuous integration and continuous delivery (CI/CD) pipeline using AWS Developer Tools, as well as Aqua Security‘s open source container vulnerability scanner, Trivy. You’ll build two Docker images, one with vulnerabilities and one without, to learn the capabilities of Trivy and how to send all vulnerability information to AWS Security Hub.

If you’re building modern applications, you might be using containers, or have experimented with them. A container is a standard way to package your application’s code, configurations, and dependencies into a single object. In contrast to virtual machines (VMs), containers virtualize the operating system rather than the server. Thus, the images are orders of magnitude smaller, and they start up much more quickly.

Like VMs, containers need to be scanned for vulnerabilities and patched as appropriate. For VMs running on Amazon Elastic Compute Cloud (Amazon EC2), you can use Amazon Inspector, a managed vulnerability assessment service, and then patch your EC2 instances as needed. For containers, vulnerability management is a little different. Instead of patching, you destroy and redeploy the container. 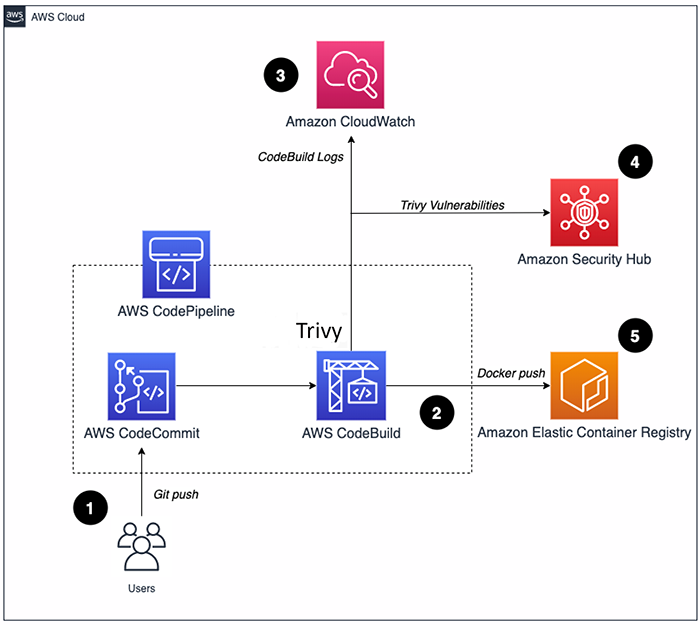 Here’s how the solution works, as shown in Figure 1:

Note: CodePipeline supports different sources, such as Amazon Simple Storage Service (Amazon S3) or GitHub. If you’re comfortable with those services, feel free to substitute them for this walkthrough of the solution.

To quickly deploy the solution, you’ll use an AWS CloudFormation template to deploy all needed services.

For this stage, you’ll deploy the CloudFormation template and do preliminary setup of the CodeCommit repository.

Setting up the CodeCommit repository

For this stage, you’ll create the necessary files and add them to your CodeCommit repository to start an automated container vulnerability scan.

Figure 4: Uploading a file to CodeCommit

You’ll now go to Security Hub to further analyze the findings and create saved searches for future use.

For this stage, you’ll analyze your container vulnerabilities in Security Hub and use the findings view to locate information within the ASFF.

This was a brief demonstration of exploring findings with Security Hub. You can use custom actions to define response and remediation actions, such as sending these findings to a ticketing system or aggregating them in a security information event management (SIEM) tool.

Now that you’ve seen Trivy perform correctly with a vulnerable image, you’ll fix the vulnerabilities. For this stage, you’ll modify Dockerfile to remove any vulnerable dependencies.

In this post, you learned how to create a CI/CD Pipeline with CodeCommit, CodeBuild, and CodePipeline for building and scanning Docker images for critical vulnerabilities. You also used Security Hub to aggregate scan findings and take action on your container vulnerabilities.

You now have the skills to create similar CI/CD pipelines with AWS Developer Tools and to perform vulnerability scans as part of your container build process. Using these reports, you can efficiently identify CVEs and work with your developers to use up-to-date libraries and binaries for Docker images. To further build upon this solution, you can change the Trivy commands in your build specification to fail the builds on different severity levels of found vulnerabilities. As a final suggestion, you can use ECR as a source for a downstream CI/CD pipeline responsible for deploying your newly-scanned images to Amazon Elastic Container Service (Amazon ECS).