The concept of infrastructure as code, by using pipelines for continuous integration and delivery, is fundamental for the development of cloud infrastructure. Including code quality and vulnerability scans in the pipeline is essential for the security of this infrastructure as code. In one of our previous posts, How to build a CI/CD pipeline for container vulnerability scanning with Trivy and AWS Security Hub, you learned how to scan containers to efficiently identify Common Vulnerabilities and Exposures (CVEs) and work with your developers to address them.

In this post, we’ll continue this topic, and also introduce a method for integrating open source tools that find potentially insecure patterns in your AWS CloudFormation templates with both AWS Security Hub and AWS CodeBuild reports. We’ll be using Stelligent’s open source tool CFN-Nag. We also show you how you can extend the solution to use AWS CloudFormation Guard (currently in preview).

One reason to use this integration is that it gives both security and development teams visibility into potential security risks, and resources that are insecure or non-compliant to your company policy, before they’re deployed.

In this solution, we provide you with a ready-to-use template for performing scanning of your AWS CloudFormation templates by using CFN-Nag. This tool has more than 140 predefined patterns, such as AWS Identity and Access Management (IAM) rules that are too permissive (wildcards), security group rules that are too permissive (wildcards), access logs that aren’t enabled, or encryption that isn’t enabled. You can additionally define your own rules to match your company policy as described in the section later in this post, by using custom profiles and exceptions, and suppressing false positives.

Our solution enables you to do the following:

Figure 1 shows the architecture of the solution. The main steps are as follows: 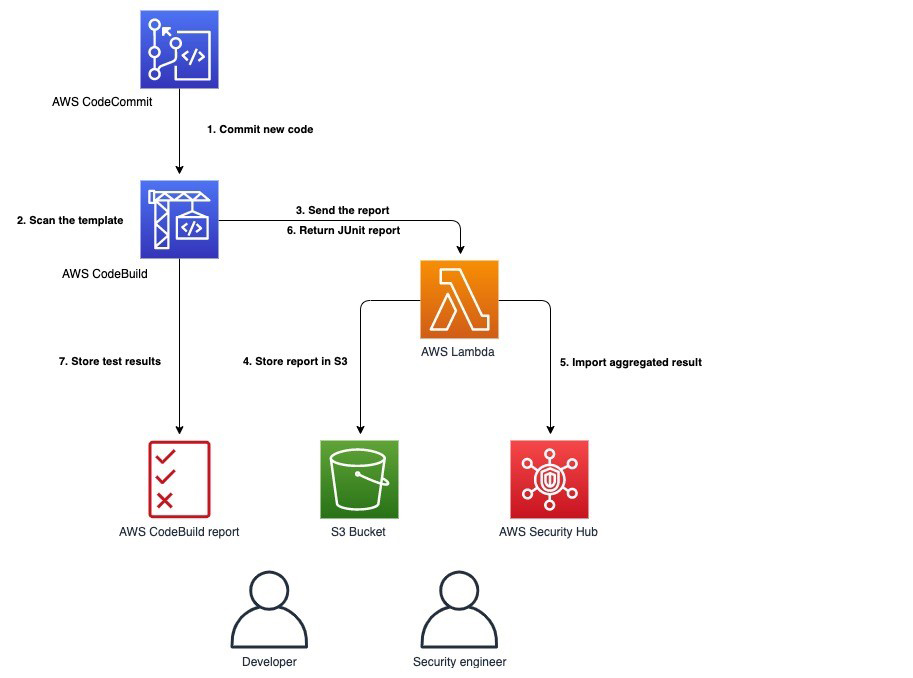 To get started, you need to set up the sample solution that scans one of your repositories by using CFN-Nag or CFN-Guard.

To set up the sample solution 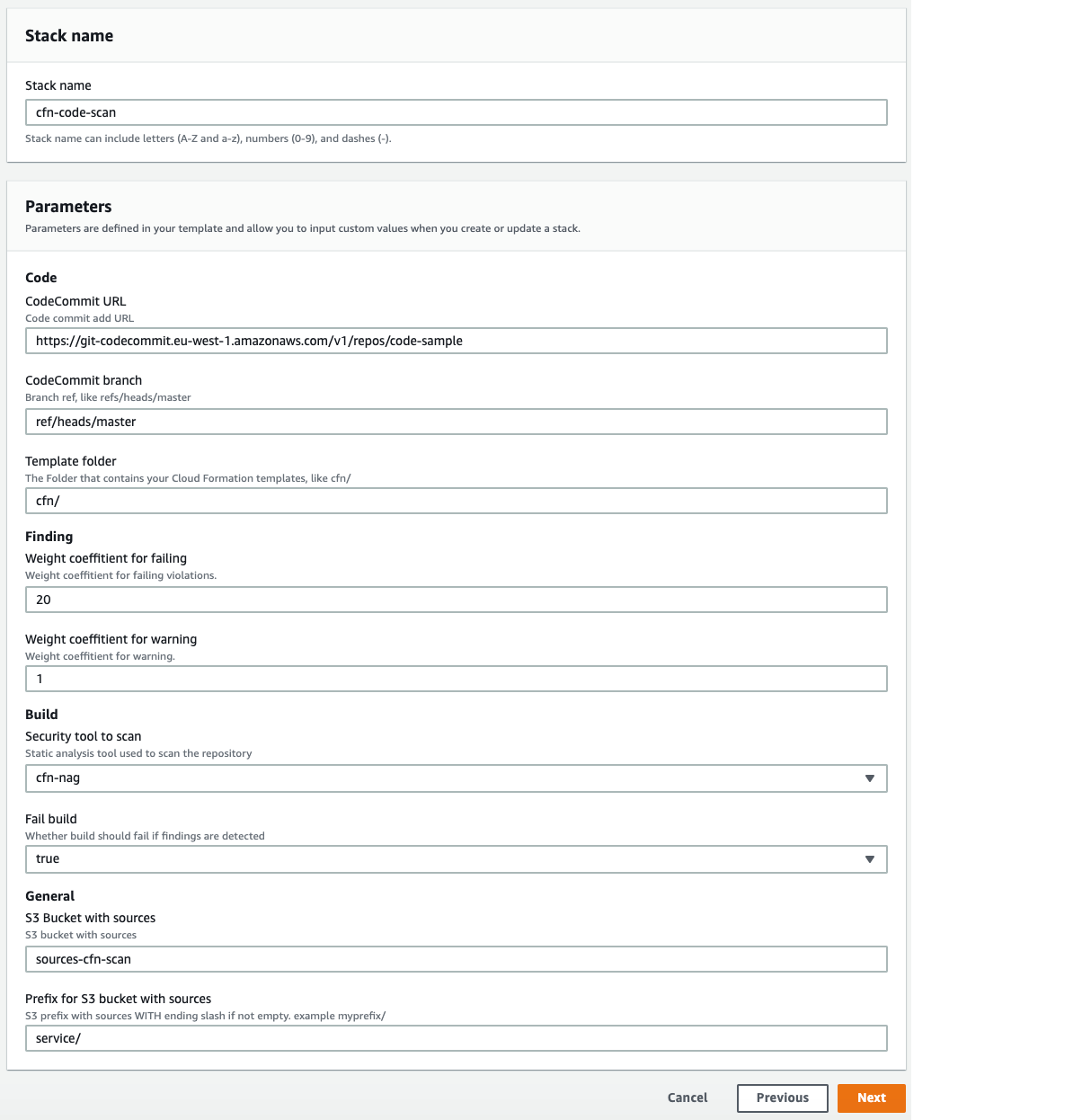 After you execute the CodeBuild project, you can view the results in three different ways depending on your preferences: CodeBuild report, Security Hub, or the original CFN-Nag or CFN-Guard report.

In the AWS Management Console, go to CodeBuild and choose Report Groups. You can find the report you are interested in under SecurityReports. Both failures and warnings are represented as failed tests and are prefixed with W(Warning) or F(Failure), respectively, as shown in Figure 3. Successful tests aren’t part of the report because they aren’t provided by CFN-Nag reports. 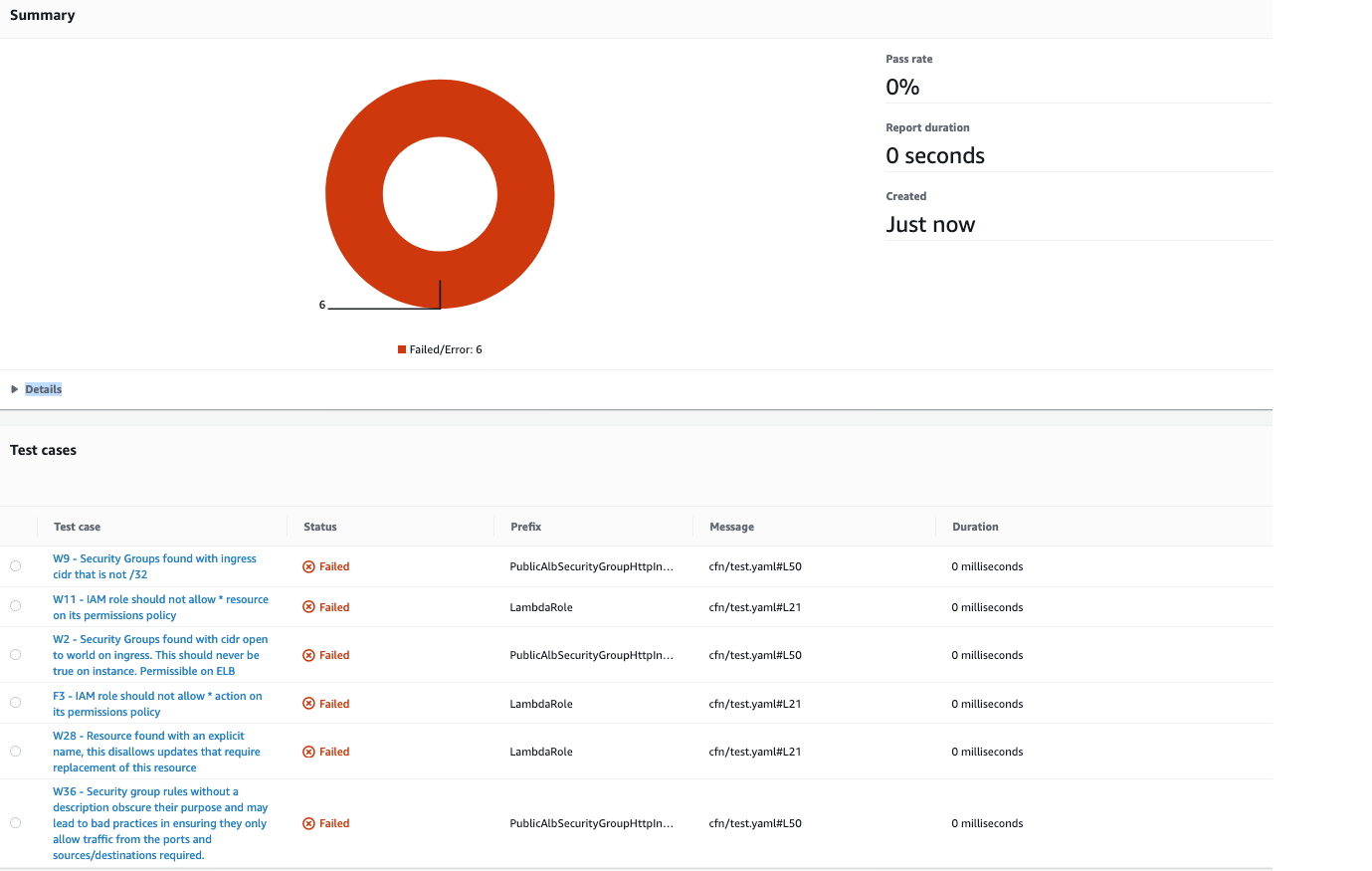 In the CodeBuild navigation menu, under Report groups, you can see an aggregated view of all scans. There you can see a historical view of the pass rate of your tests, as shown in Figure 4.

Lastly, you can find the original scan report in the S3 bucket aws-sec-build-reports-hash. You can also find a reference to this object in the associated Security Hub finding source URL. The S3 object key is constructed as follows.

The following screen capture shows a sample view of the content. 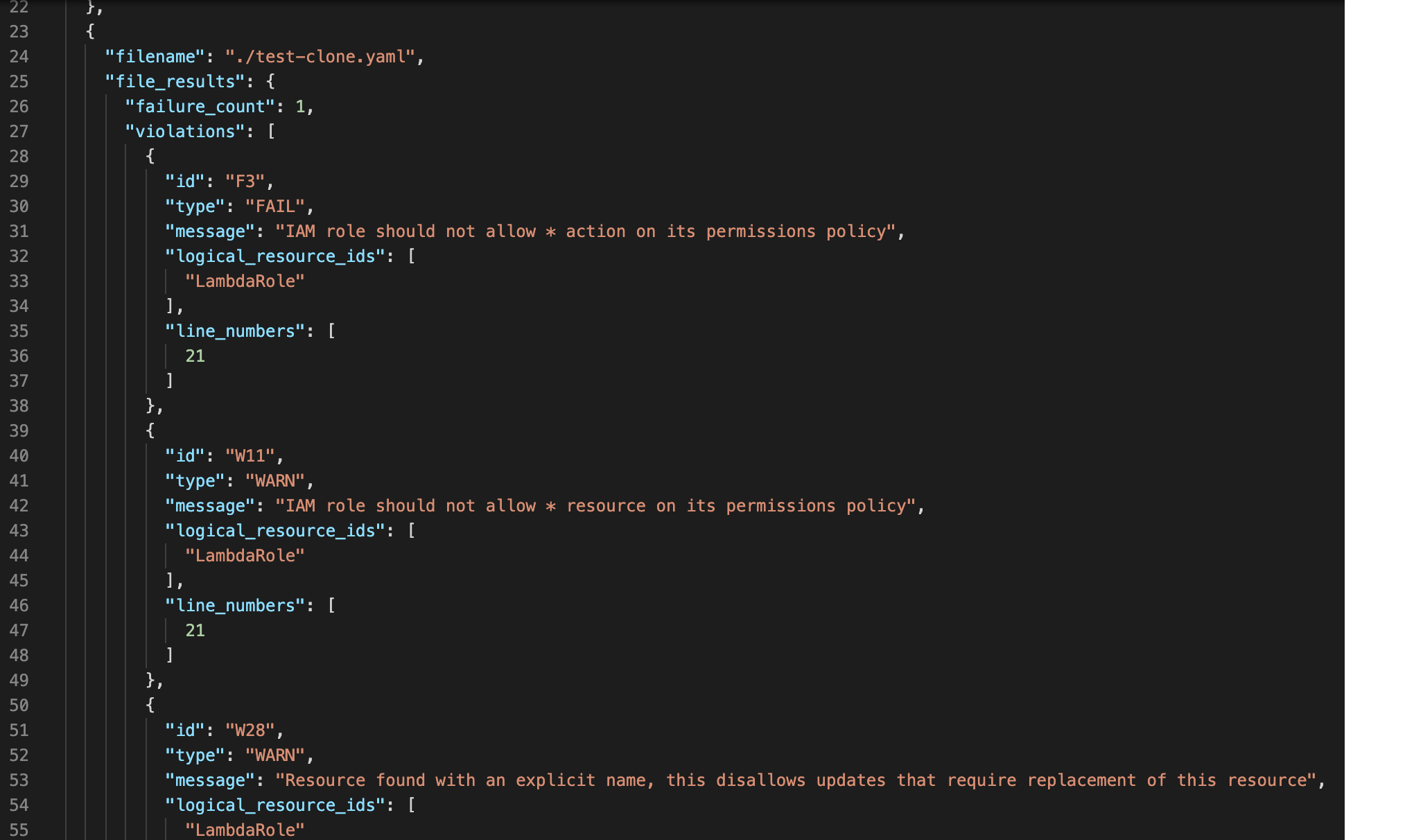 The Lambda function aggregates CFN-Nag findings to one Security Hub finding per branch and repo. We consider that in this way you get the best visibility without losing orientation in too many findings if you have a large code base.

The Security Hub finding severity is calculated as follows:

The severity label or normalized severity (from 0 to 100) (see AWS Security Finding Format (ASFF) for more information) is calculated from the summed severity. We implemented the following convention:

You can customize CFN-Nag to use a certain rule set by including the specific list of rules to apply (called a profile) within the repository. Customizing rule sets is useful because developers or applications might have different security considerations or risk profiles in specific applications. Additionally the operator might prefer to exclude rules that are prone to introducing false positives.

To add a custom profile, you can modify the cfn_nag_scan command specified in the CodeBuild buildspec.yml file. Use the --profile-path command argument to point to the file that contains the list of rules to use, as shown in the following code sample.

Where .cfn_nag.profile file contains one rule identifier per line:

You can find the full list of available rules using cfn_nag_rules command.

You can also choose instead to use a global deny list of rules, or directly suppress findings per resource by using Metadata tags in each AWS CloudFormation resource. For more information, see the CFN-Nag GitHub repository.

The integration with AWS CloudFormation Guard (CFN-Guard) follows the same architecture pattern as CFN-Nag. The ImportToSecurityHub Lambda function can process both CFN-Nag and CFN-Guard results to import to Security Hub and generate a CodeBuild report.

To deploy the CFN-Guard tool

This creates a new buildspec.yml file that uses the cfn-guard command line interface (CLI) to scan all AWS CloudFormation templates in the source repository. The scans use an example rule set found in the CFN-Guard repository.

You can use your own rule set by modifying the cfn-guard --rule_path parameter to point to a file from within your repository, as follows.

If the build report fails, you can find the CloudBuild run logs in the CodeBuild Build history. The build will fail if critical security findings are detected in the templates.

Additionally, the Lambda function execution logs can be found in the CloudWatch Log group aws/lambda/ImportToSecurityHub.

In this post, you learned how to scan the AWS CloudFormation templates for resources that are potentially insecure or not compliant to your company policy in a CodeBuild project, import the findings to Security Hub, and generate CodeBuild test reports. Integrating this solution to your pipelines can help multiple teams within your organization detect potential security risks in your infrastructure code before its deployed to your AWS environments. If you would like to extend the solution further and need support, contact AWS professional services or an Amazon Partner Network (APN) Partner. If you have technical questions, please use the AWS Security Hub or AWS CodeBuild forums.