For example, DGL-KE has created embeddings on top of the Drug Repurposing Knowledge Graph (DRKG) to show which drugs can be repurposed to fight COVID-19. These embeddings can be used to predict the likelihood of a drug’s ability to treat a disease or bind to a protein associated with the disease.

In this post, we focus on creating knowledge graph embeddings (KGE) using the Kensho Derived Wikimedia Dataset (KDWD). You can use those embeddings to find similar nodes and predict new relations. For example, in natural language processing (NLP) and information retrieval use cases, you can parse a new query and transform it syntactically into a triplet (subject, predicate, object). Upon adding new triplets to a KG, you can augment nodes and relations by classifying nodes and inferring relations based on the existing KG embeddings. This helps guide and find the intent for a chatbot application, for example, and provide the right FAQ or information to a customer.

A knowledge graph is a structured representation of facts, consisting of entities, relationships, and semantic descriptions purposely built for a given domain or application. They are also known as heterogenous graphs, where there are multiple entity types and relation types. The information stored in a KG is often specified in triplets, which contain three elements: head, relation, and tail ([h,r,t]). Heads and tails are also known as entities. The union of triplets is also known as statements.

KGs allow you to model your information very intuitively and expressively, giving you the ability to integrate data easily. For example, you can use Amazon Neptune to build an identity graph powering your customer 360 or Know Your Customer application commonly found in financial services. In healthcare and life sciences, where data is usually sparse, KGs can integrate and harmonize data from different silos using taxonomy and vocabularies. In e-commerce and telco, KGs are commonly used in question answering, chatbots, and recommender systems. Fore more information on using Amazon Neptune for your use case, visit the Amazon Neptune homepage.

Knowledge graph embeddings are low-dimensional representations of the entities and relations in a knowledge graph. They generalize information of the semantic and local structure for a given node.

Each model has a different score function that measures the distance of two associated entities by their relation. The general intuition is that entities connected by a relation are closed to each other, whereas the entities that aren’t connected are far apart in the vector space.

The scoring functions for the models currently supported by DGL-KE are as follows: 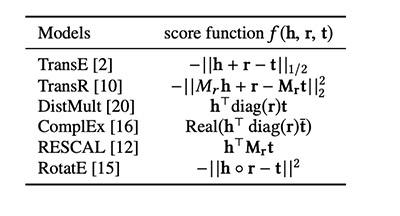 In our use case, we use the Kensho Derived Wikimedia Dataset (KDWD). You can find the notebook example and code in the DGL-KE GitHub repo.

The combination of Wikipedia and Wikidata is composed of three data layers: 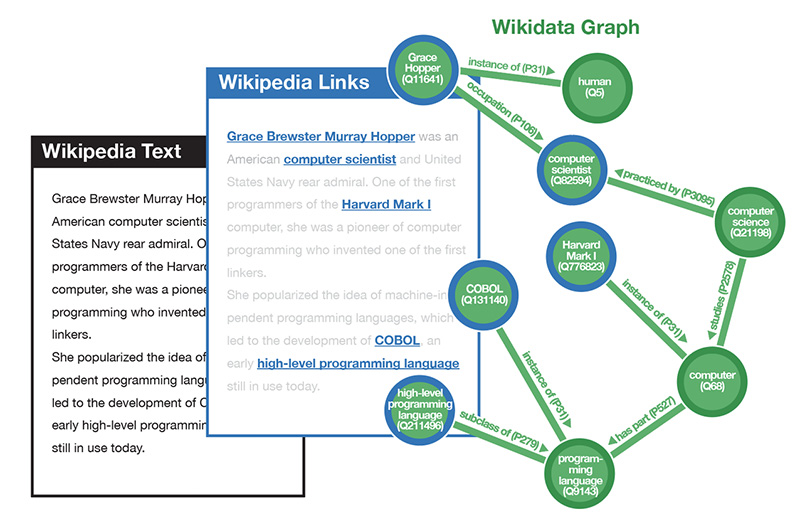 The KDWD contains the following:

The following code is an example of the entity.txt file:

Before you can create your embeddings, you need to pre-process the data. DGL-KE gives you the ability to compute embeddings using two formats.

In raw user-defined knowledge graphs, you provide the triplets; the entities and relations can be arbitrary strings. The dataloader automatically generates the ID mappings.

The following table from Train User-Defined Knowledge Graphs shows an example of triplets.

In user-defined knowledge graphs, you also provide the ID mapping for entities and relations (the triplets should only contain these IDs). The IDs start from 0 and are continuous. The following table from Train User-Defined Knowledge Graphs shows an example of mapping and triplets files.

Although the dataset KDWD provides dictionaries, we can’t use it for our use case because the index doesn’t start with 0 and the index values aren’t continuous. We preprocess our data and use the raw format to generate our embeddings. After merging and cleaning the data, we end up with a KG with the following properties:

The following code is an example of the triplets.

DGL-KE has many different training modes. CPU, GPU, mix-CPU-GPU mode, and distributed training are all supported options, depending on your dataset and training requirements. For our use case, we use mix mode to generate our embeddings. If you can contain all the data in GPU memory, GPU is the preferred method. Because we’re training on a large KG, we use mix mode to get a larger pool of CPU- and GPU-based memory and still benefit from GPU for accelerated training.

We create our embeddings with the dgl-ke command line. See the following code:

For more information about the DGL-KE arguments, see the DGL-KE website.

We trained our KG of about 40 million entities and 1,200 relations and approximately 120 million statements on a p3.8xl in about 7 minutes.

We evaluate our model by entering the following code:

DGL-KE allows you to perform KG downstream tasks by using any combinations of [h,r,t].

To find similar node entities from our head.list, we enter the following code:

Interestingly, all the nodes similar to Jeff Bezos describe tech tycoons. Barack Obama’s similar nodes show former and current presidents of the US.

Knowledge graph embeddings give you powerful methods to encode semantic and local structure information for a given node, and you can also use them as input for machine learning and deep learning models. DGL-KE supports popular embedding models and allows you to compute those embeddings on CPU or GPU at scale two-to-five times faster than other techniques.

We’re excited to see how you use graph embeddings on your existing KGs or new machine learning problems. For more information about the library, see the DGL-KE GitHub repo. For instructions on using Wikimedia KG embeddings in your KG, see the DGL-KE notebook example.

Phi Nguyen is a solution architect at AWS helping customers with their cloud journey with a special focus on data lake, analytics, semantics technologies and machine learning. In his spare time, you can find him biking to work, coaching his son’s soccer team or enjoying nature walk with his family.

Xiang Song is an Applied Scientist with the AWS Shanghai AI Lab. He got his Bachelor’s degree in Software Engineer and Ph.D’s in Operating System and Architecture from Fudan University. His research interests include building machine learning systems and graph neural network for real world applications.