Today, I am very happy to announce that, as we anticipated some time ago, a new AWS Region is available in Italy!

The Europe (Milan) Region is our sixth Region in Europe, and is composed of 3 availability zones (AZs) that you can use to reliably spread your applications across multiple data centers, for example configuring the subnets of your Amazon Virtual Private Cloud (Amazon VPC) to use different AZs for your Amazon Elastic Compute Cloud (Amazon EC2) instances. Each AZ is a fully isolated partition of our infrastructure that contains one or more data centers.

AZs are located in separate and distinct geographic locations with enough distance to significantly reduce the risk of a single event impacting availability in the Region, but near enough for business continuity applications that require rapid failover and synchronous replication. This gives you the ability to operate production applications that are more highly available, more fault tolerant, and more scalable than would be possible from a single data center. Fully managed services like Amazon Simple Storage Service (Amazon S3), AWS Lambda, and Amazon DynamoDB, replicate data and applications across AZs automatically. 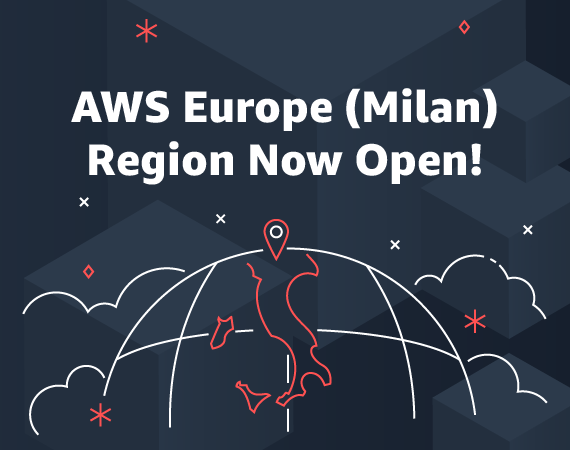 The AWS Region in Milan offers low latency for customers seeking to serve end-users in Italy, and also has a latency advantage over other existing AWS regions when serving customers from other countries such as Austria, Greece, and Bulgaria. Results may differ based on the quality, capacity, and distance of the connection in the end user’s last-mile network.

An in-country infrastructure is also critical for Italian customers with data residency requirements and regulations, such as those operating in government, healthcare, and financial services.

AWS in Italy
Currently AWS has five edge locations in Italy (three in Milan, one in Palermo, and one in Rome) and an AWS Direct Connect location in Milan which connects to the Europe (Frankfurt) Region and to the new Region in Milan.

We opened the first AWS office in Italy at the beginning of 2014 in Milan, there is now also an office in Rome, engineering teams in Piedmont and Sardinia, and a broad network of partners. AWS continues to build in Italy teams of account managers, solutions architects, business developers, and professional services consultants to help customers of all sizes build or move their workloads in the cloud. In 2016, AWS acquired Italy-based NICE Software, a leading provider of software and services for high performance and technical computing.

I joined AWS in 2012, and I was immediately blown away by what Italian customers were building on AWS to lower their costs, become more agile, and innovate faster. For example:

Available Now
The new Europe (Milan) Region is ready to support your business. You can look at the Region Table for service availability.

With this launch, AWS now has 76 AZs within 24 geographic Regions around the world, with 3 new Regions coming in Indonesia, Japan, and Spain. To build a secure, high-performing, resilient, and efficient infrastructure for your applications, you can leverage the best practices we shared in the AWS Well Architected Framework, and review your architecture using the AWS Well-Architected Tool.

For more information on our global infrastructure, and the custom hardware we use, check out this interactive map.