At re:Invent 2016, AWS announced a new fully managed service called AWS CodeBuild that allows you to build your software. Using CodeBuild, you can build code using pre-built images for Java, Ruby, Python, Golang, Docker, Node, and Android or use your own customize images for other environments without provisioning additional compute resources and configuration. This way you can focus more time on developing your application or service features for your customers.

In our previous post, An Introduction to CodeBuild, we described the purpose of AWS CodeBuild, its target users, and how to setup an initial CodeBuild project. In this post, you will learn how to integrate and automate the orchestration of CodeBuild with the rest of the AWS Developer Tools suite – including AWS CodeDeploy, AWS CodeCommit, and AWS CodePipeline using AWS’ provisioning tool, AWS CloudFormation. By automating all of the actions and stages into a deployment pipeline, you can release changes to users in production whenever you choose to do so. You’ll see an example that walks you through the process along with a detailed screencast that shows you every step in launching the solution and testing the deployment.

Keep in mind that CodeBuild is a building block service you can use for executing build, static analysis, and test actions that you can integrate into your deployment pipelines. You use an orchestration tool like CodePipeline to model the workflow of these actions along with others such as polling a version-control repository, provisioning environments, and deploying software.

Here are the prerequisites for this solution:

These prerequisites will be explained in greater detail in the Deployment Steps section.

In Figure 2, you see the architecture for launching a deployment pipeline that gets source assets from CodeCommit, builds with CodeBuild, and deploys software to an EC2 instance using CodeDeploy. You can click on the image to launch the template in CloudFormation Designer. 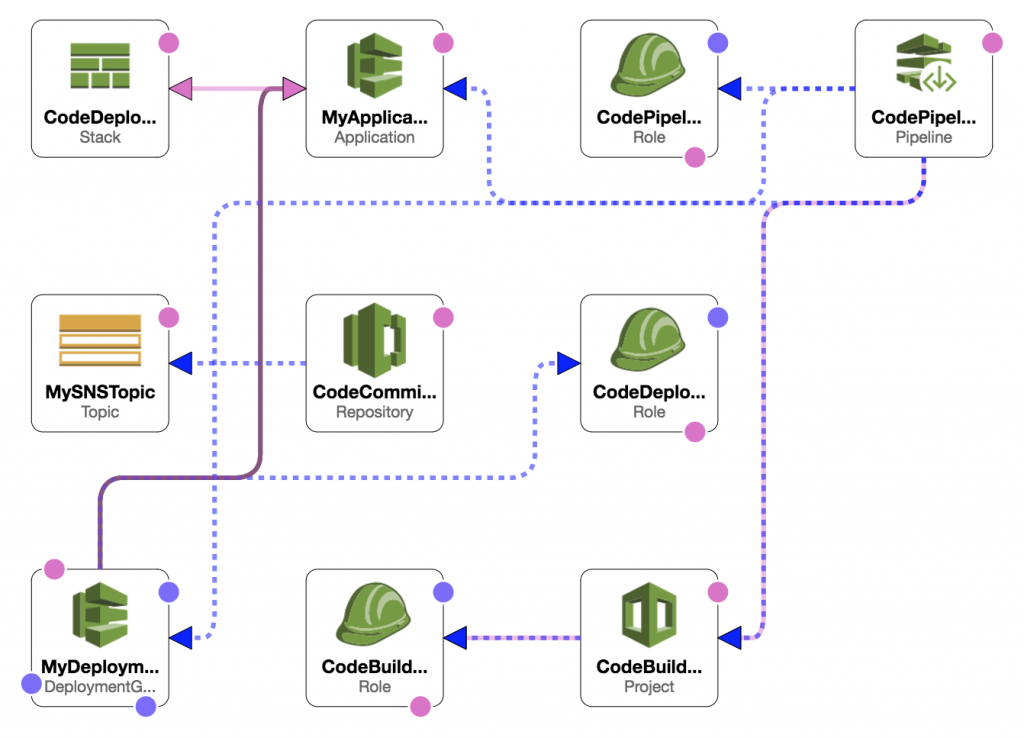 The components of this solution are described in more detail below:

AWS CloudFormation has provided CodeBuild support from day one. Using the AWS::CodeBuild::Project resource, you can provision your CodeBuild project in code as shown in the sample below.

The key attributes, blocks, and values of the CodeBuild CloudFormation resource are defined here:

With CodeCommit, you can provision a fully managed private Git repository that integrates with other AWS services such as CodePipeline and IAM. To automate the provisioning of a new CodeCommit repository, you can use the AWS::CodeCommit::Repository CloudFormation resource. You can create a trigger to receive notifications when the master branch gets updated using an SNS Topic as a dependent resource that is created in the same CloudFormation template. For a more detailed example and description, see Provision a hosted Git repo with AWS CodeCommit using CloudFormation.

AWS CodeDeploy provides a managed service to help you automate and orchestrate software deployments to Amazon EC2 instances or those that run on-premises.

While you can create a deployment pipeline for CodePipeline in CloudFormation by directly writing the configuration code, we often recommend that customers manually create the initial pipeline using the CodePipeline console and then once it’s established run the get-pipeline command (as shown below) to get the proper CodePipeline configuration to use in defining the CloudFormation template. To create a pipeline using the console, follow the steps in the Simple Pipeline Walkthrough. Choose CodeCommit as a source provider, CodeBuild as a build provider and CodeDeploy as a deploy provider.

In the following snippet, you see how you can use the AWS::CodePipeline::Pipeline resource to define the deployment pipeline in CodePipeline. A snippet of this configuration is shown below.

Once the CodePipeline has been manually created using the AWS console, you can run the following command to get the necessary resource configuration that can be copied and modified in CloudFormation. Replace PIPELINE-NAME with the name of the pipeline that you manually created.

You will get the configuration output using this command. You can add this configuration to the CodePipeline resource configuration in CloudFormation. You’ll need to modify the attribute names from lowercase to title case.

In configuring the CodeBuild action for the CodePipeline resource, the most relevant section is in defining the ProjectName as shown in the snippet below.

Since costs can vary as you use certain AWS services and other tools, you can see a cost breakdown and some sample scenarios to give you an idea of what your monthly spend might look like. Note this will be dependent on your unique environment and deployment, and the AWS Cost Calculator can assist in establishing cost projections.

So, for this particular sample solution, as long as you don’t run it past the 30 days free period after the pipeline was created, you will not be charged. Read more about CodePipeline’s pricing here.

There are three main steps in launching this solution: preparing an AWS account, launching the stack, and testing the deployment. Each is described in more detail in this section. Please note that you are responsible for any charges incurred while creating and launching your solution.

Click on the Launch Stack button below to launch the CloudFormation stack. Before you launch the stack, review the architecture, configuration, and other considerations discussed in this post. To download the template, click here.

The template includes default settings that you can customize by following the instructions in this post.

Click on the CodePipelineURL Output in your CloudFormation stack. You’ll see that the pipeline has failed on the Source action. This is because the Source action expects a populated repository and it’s empty. The way to resolve this is to commit the application files to the newly-created CodeCommit repository. First, you’ll need to clone the repository locally. To do this, get the CloneUrlSsh Output from the CloudFormation stack you launched in Step 2. A sample command is shown below. You’ll replace {CloneUrlSsh} with the value from the CloudFormation stack output. For more information on using SSH to interact with CodeCommit, see the Connect to the CodeCommit Repository section at: Create and Connect to an AWS CodeCommit Repository. 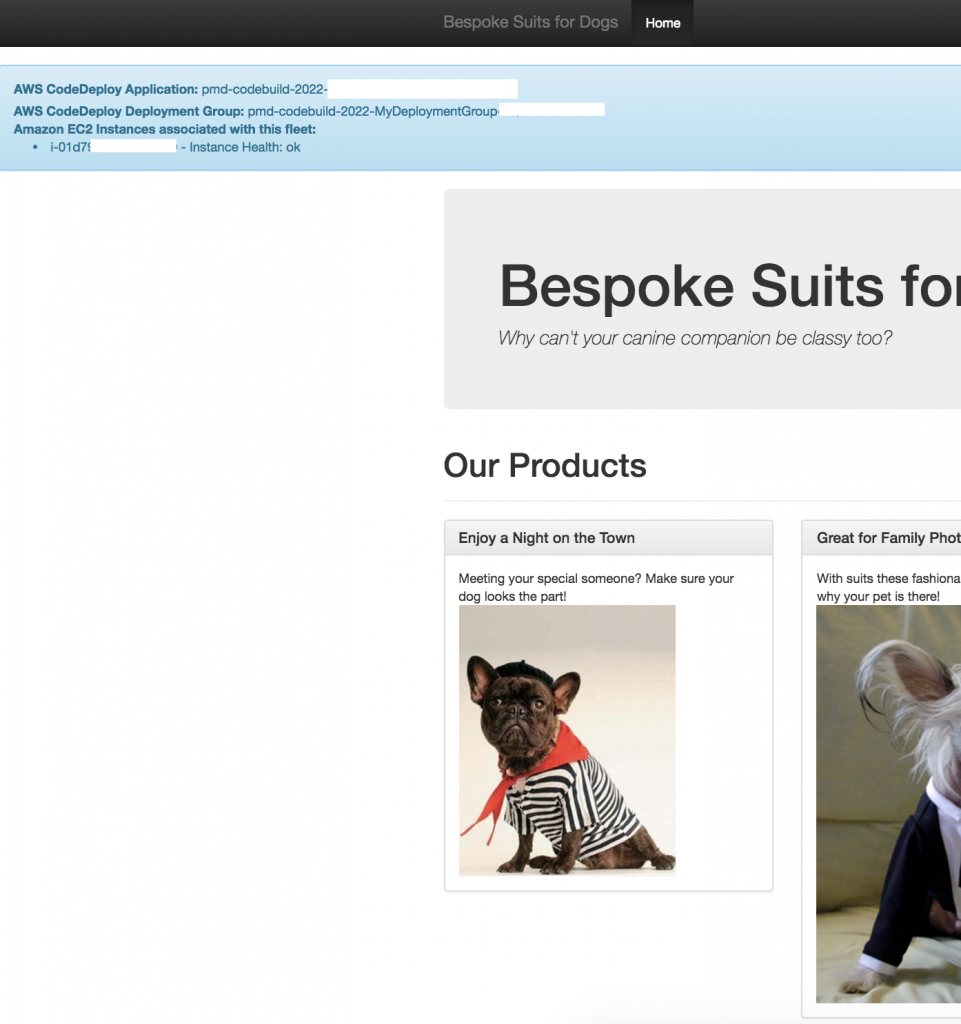 You can access the Source and Build using the CodePipeline Action Details. For example, go to the pipeline and click on commit id for the Source action and click on the Details to the Build action. See Figure 4 for a detailed illustration of this pipeline.

There are also direct links for the CodeCommit, CodeBuild, and CodeDeploy resources in the CloudFormation Outputs as well.

Once these changes have been committed, CodePipeline will discover the changes made to your CodeCommit repo and initiate a new pipeline. After the pipeline is successfully completed, follow the same instructions for launching the application from your browser. Once deployed, you should see the modifications you made in the application upon entering the URL – as shown in Figure 5. 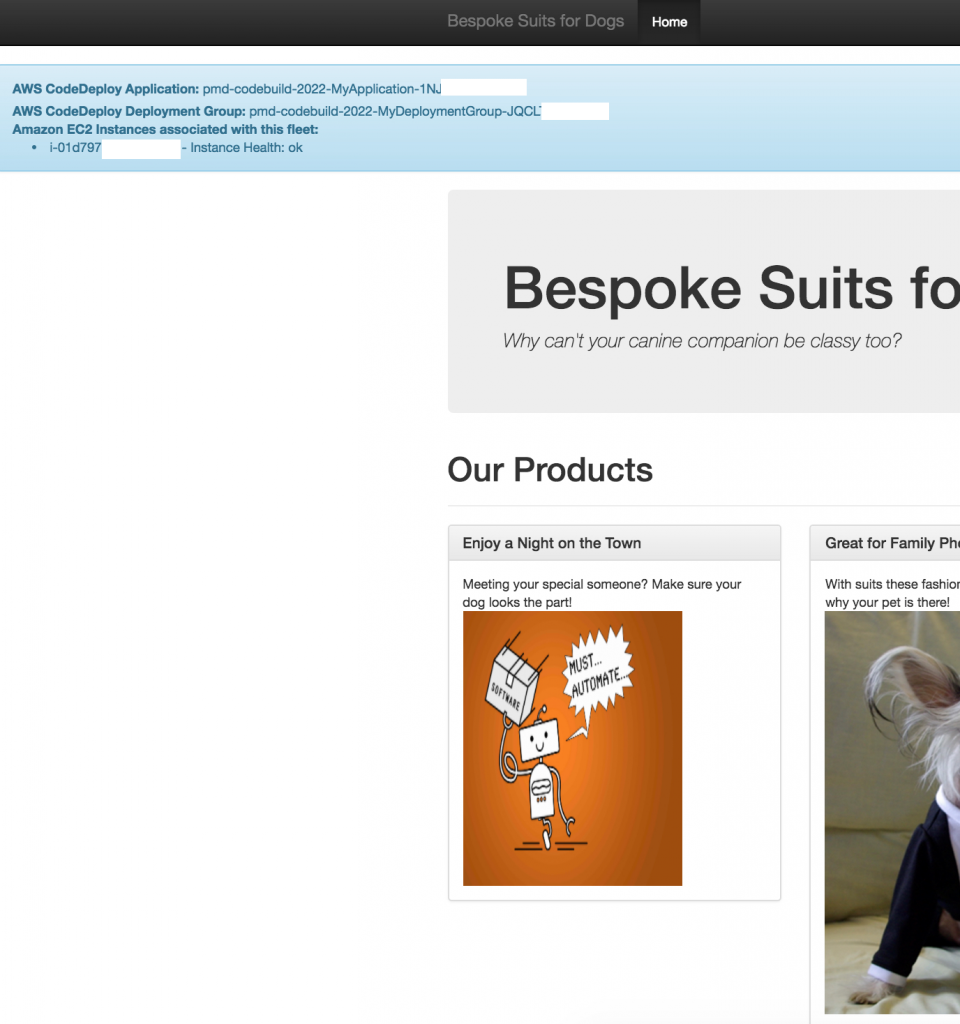 Figure 5 – Deployed Java Application with Changes Committed to CodeCommit, Built with CodeBuild, and Deployed with CodeDeploy

In this video, I walk through the deployment steps described above.

In this post, you learned how to define and launch a CloudFormation stack capable of provisioning a fully-codified continuous delivery solution using CodeBuild. Additionally, the example included the automation of a CodePipeline deployment pipeline – which included the CodeCommit, CodeBuild, and CodeDeploy integration.

Furthermore, I described the prerequisites, architecture, implementation, costs, and deployment steps of the solution.

The code for the examples demonstrated in this post are located at https://github.com/stelligent/aws-codedeploy-sample-tomcat. Let us know if you have any comments or questions @stelligent.