As customers continually move towards hybrid cloud architectures, it has become increasingly important to address network security requirements for having a centralized security inspection solution between VMware Cloud on AWS and the native AWS environment, on-premises data centers, and the internet.

With an extensive selection of third-party firewall solutions from AWS Marketplace, customers have the flexibility to deploy the same network security solutions in the cloud as they have on-premises, with a seamless user experience.

In addition, VMware Transit Connect helps customers simplify management at scale through automatic route propagations to the route tables in each SDDC and the VTGW. SDDCs automatically learn routes advertised by other SDDCs within the same SDDC group, and networks advertised from other VPCs and on-premises networks via the VTGW and DXGW.

Furthermore, with the recent m15 release, customers can now integrate a third-party firewall with the SDDC group through a Security VPC, by injecting a static route at the VMware Transit Connect via a high speed VPC attachment.

Prior to this, customers could only integrate firewall appliances with SDDCs through virtual private network (VPN) connectivity with limited bandwidth and scalability, or to redirect SDDC traffic back at on-premises firewalls with added latency and complexity. 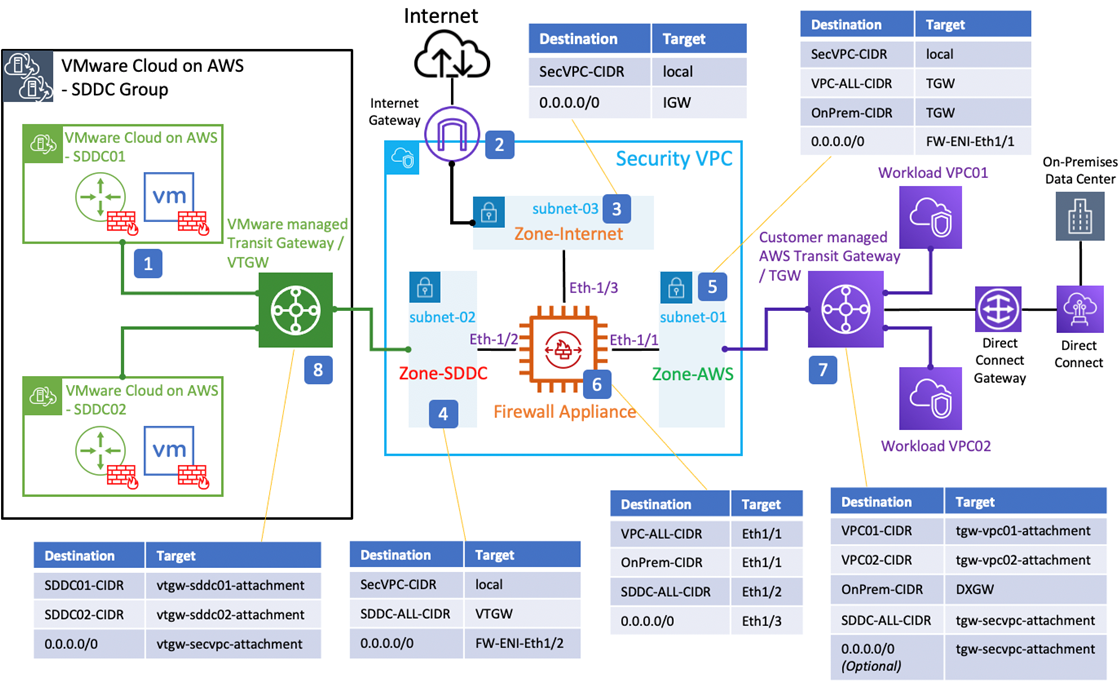 This architecture also simplifies the process for customers to connect SDDCs with their existing AWS environment through the combined use of VTGW and customer managed AWS Transit Gateway (TGW).

The reference architecture can be used as the basis for a proof of concept (PoC) by following the eight steps highlighted in the diagram above:

In addition, since all SDDC egress traffic to the internet, and ingress access from the internet, including SDDC management traffic will be enforced to go through the Security VPC. The architecture helps prevent customers from accidentally exposing vCenter access to the internet via the SDDC console.

For more details, please refer to the full reference architecture.

In the following example, we are going to deploy a Palo Alto firewall appliance and integrate into a VMware Cloud on AWS environment, based on the Security VPC reference architecture. 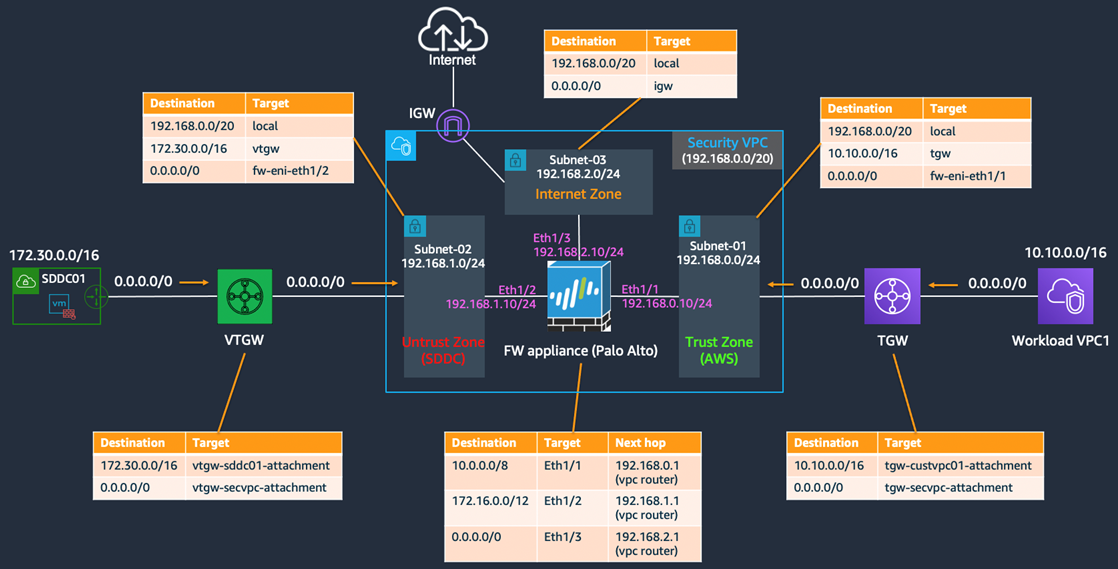 Before we get to the detailed steps, I have provisioned and prepared the following items as prerequisites to this lab:

I’ll walk through the configurations covering the following aspects:

For this demo, I have used Palo Alto VM-Series Next-Generation Firewall Bundle 2 from AWS Marketplace. You can follow the official guide for detailed steps on launching the instance.

To begin with, we’ll create a SDDC group to include the existing SDDC as a member, which triggers an automatic deployment of a VTGW that connects to the SDDC via high speed VPC attachment.

Once the Transit Connect and SDDC connectivity status are showing “CONNECTED,” we can associate the AWS account of the Security VPC to the SDDC group.

In the AWS console, we’ll soon be able to see the VTGW resource being shared under the Resource Access Manager (RAM). Accept the share, and create a Transit Gateway VPC attachment to connect the VTGW to the Security VPC.

Back in the SDDC group console, accept the newly-created TGW attachment. Once the Security VPC’s status becomes “available,” we can add a static default route towards it.

The static route will be automatically propagated to all member SDDCs, and this can be verified at the “Routes Learned” section under Networking & Security > Transit Connect.

To prepare the AWS networking side, we’ll need to create one dedicated route table for each of the three subnets, which represent the three security zones: “Trust” (native AWS side), “Untrust” (SDDC side), and “Public” (internet).

Next, we’ll configure the following static routes for each of the security zones. This ensures all inter-zone traffic is pushed through the Palo Alto firewall, which provides security inspection and policy enforcement between the SDDCs, AWS native environment, and the internet. 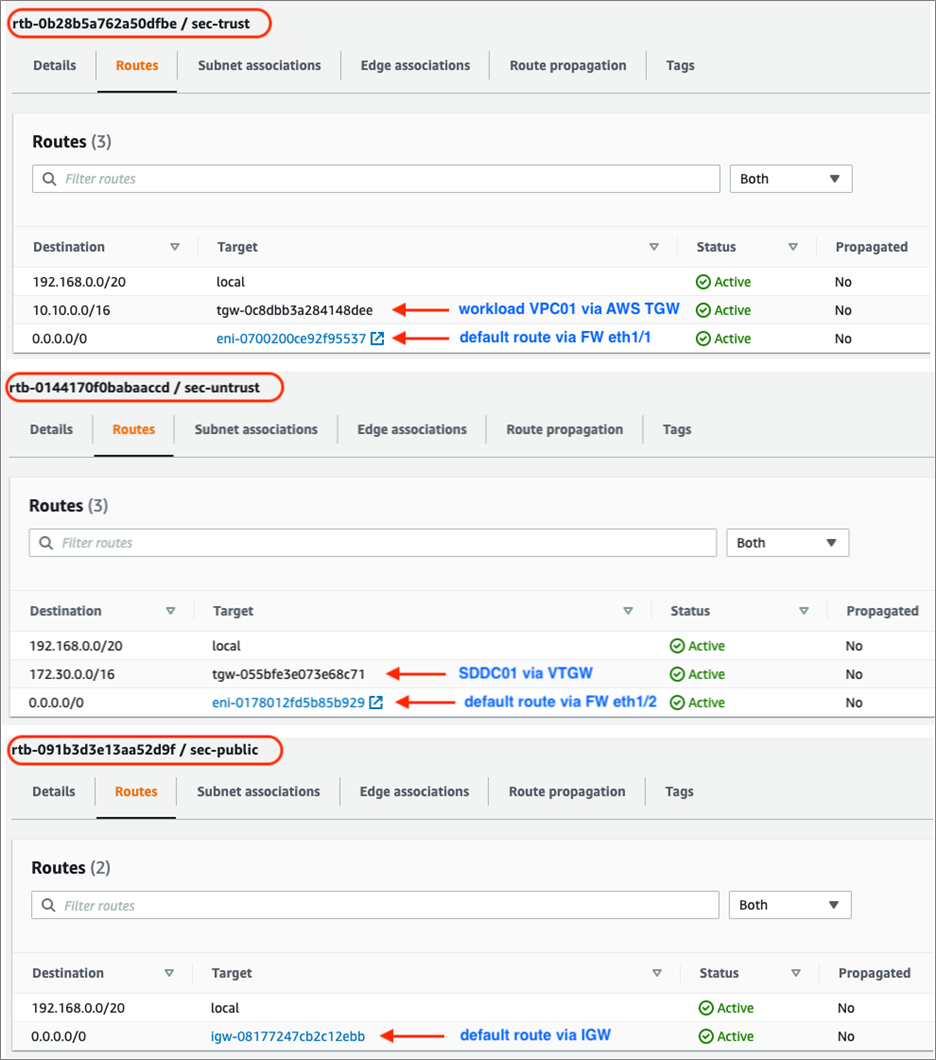 Navigate to the route table of the AWS TGW (for native workload VPC), and add the SDDC routes towards the Security VPC. Optionally, you could just add a default route to push all egress traffic including internet access via the Security VPC, like I did here.

Figure 10 – Assign a public EIP to the firewall internet interface.

Next, log into to the Palo Alto management console to configure the firewall interfaces. Under Network > Ethernet, assign each Ethernet interface to the private address of its connected ENI accordingly. Attach each interface to the appropriate firewall zone and virtual router (I’m using the default router instance as an example here).

Finally, navigate to Network > Virtual Router > default to configure the firewall route table as per the lab topology.

At this point, we have established transit connectivity at the Palo Alto appliance through the Security VPC. Depending on the firewall rules you have configured, you should be able to observe live flow logs for traffic traversing across different security zones.

It’s important to note the overall throughput of the Security VPC architecture is heavily depending on the third-party firewall solution customers choose to deploy. It’s recommended that you check with the preferred firewall vendor and make sure to select the appropriate Amazon Elastic Compute Cloud (Amazon EC2) instance type based on your environment requirements.

Depending on the internet traffic demand, you can set up a separate firewall instance dedicated for the internet-bound traffic inspection. In addition, you could leverage NAT gateway and VPC ingress routing to offload the NAT function to a NAT gateway and further improve firewall performance.

High availability (HA) can be achieved by setting up a firewall HA pair with an active/passive deployment in the same AWS Availability Zone (AZ). Depending on the firewall vendor support, you could also leverage floating secondary IP addresses to provide better failover time.

Since this architecture consists of two transit gateways, it’s impossible to build an active/active firewall HA solution across multiple AZs. In order to maintain route symmetry for each stateful firewall, the appliance mode feature is required but does not span across multiple transit gateways. This is due to each transit gateway maintaining its own session affinity, which could select a different (firewall) ENI within another AZ, causing return traffic getting dropped.

However, you can still implement a cross-AZ firewall HA solution with an active/passive deployment, and to switch over traffic to a secondary firewall in the event of a primary firewall/AZ failure. This process can be monitored and remediated through an automated pipeline such as AWS Lambda functions.

An alternative option is to leverage a dedicated ingress VPC with Application Load Balancers to terminate inbound connections, before forwarding traffic to the web or app virtual machines running in the SDDCs. This option provides better efficiency and scalability while reducing costs by conserving public EIPs.

In this post, we took a closer look at a centralized Security VPC architecture for integrating third-party firewall solutions with VMware Cloud on AWS, using the VMware Transit Connect feature.

We also went through a real example of integrating a Palo Alto firewall appliance with VMware Cloud on AWS based on this reference architecture.

To learn more, I recommend you review these additional resources: