Many software-as-a-service (SaaS) applications boast of microservices as a means to divide a monolithic architecture into easily manageable solutions.

Sometimes these microservices have their own databases. To maintain data consistency across the system, you need to implement a data synchronization system between source and target data persistence layers.

Amazon AppFlow is a fully managed integration service that enables you to securely transfer data between SaaS and cloud applications like Salesforce, Marketo, Slack, and ServiceNow, as well as AWS services like Amazon S3 and Amazon Redshift, in just a few clicks.

In this post, you will learn how Trantor has developed a solution using Amazon AppFlow to easily synchronize the data between Salesforce and Amazon RDS for PostgreSQL in near real-time.

Trantor’s solution is in production at, among others, a FinTech client who offers loans and leverages Salesforce along with their unique backend PostgreSQL database to track status, updates, and lender details in real-time before a decision is made.

For FinTech customers, the need for a data replication system can be of utmost importance.

Trantor’s solution is designed to build a data synchronization system that enables bi-directional sync between Salesforce and the Ruby on Rails application.

The synchronization system should support the following features:

The main challenges faced while using a third-party tool for the bi-directional sync includes:

In the following sections, we describe the details of implementation and challenges faced while implementing the Salesforce to Amazon RDS for PostgreSQL synchronization and vice versa.

The challenges faced are different and unique in each direction due to the difference in source systems. 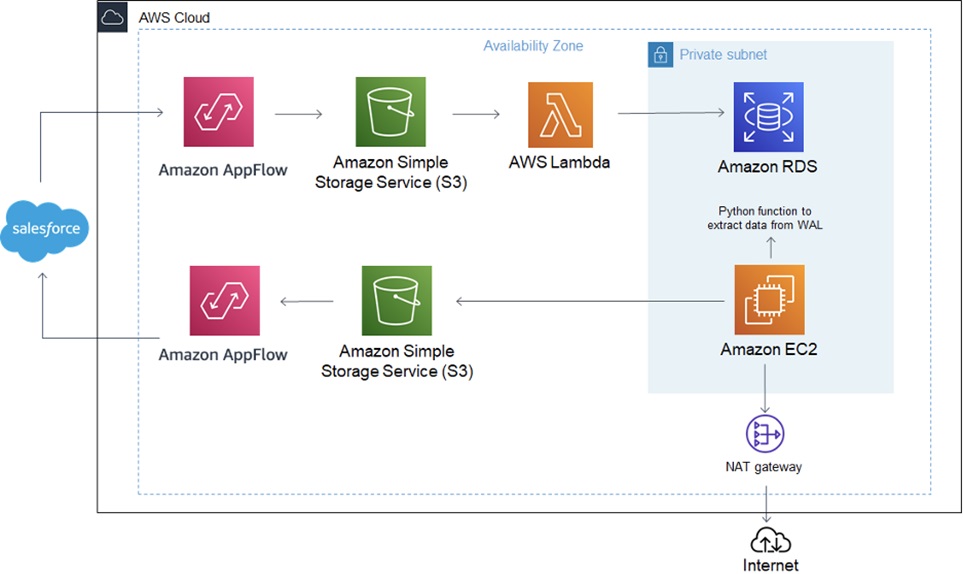 Using Amazon S3 event notifications, an AWS Lambda custom Python script is triggered which reads the JSON dumped in the S3 bucket and replicates the changes to the target Amazon RDS for PostgreSQL database.

The earlier implementation which relied on a third-party tool had a replication lag of 10 minutes. This meant the data generated in Salesforce could have taken a maximum of 10 minutes to be reflected in the corresponding PostgreSQL database. This is huge considering the fact that replication systems should be as close as possible to a real-time sync.

Using AWS Lambda, Trantor was able to bring down the time to one minute using their custom replication system. AppFlow generates CSV files for changes on Salesforce that Lambda reads and pushes to PostgreSQL all under a minute. 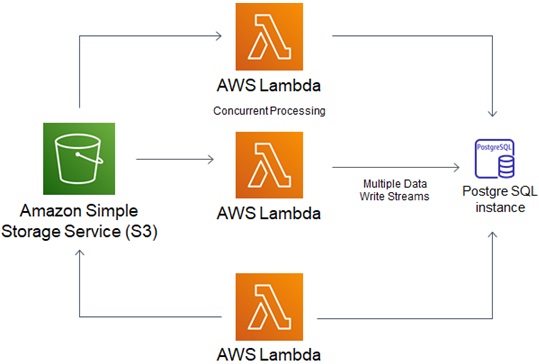 When using Lambda to replicate data from S3 to PostgreSQL, it provides advantages such as:

For data flow from Amazon RDS PostgreSQL to Salesforce, you need to enable logical replication which lets the server store additional information in WAL (Write-Ahead Logging) on Amazon RDS for PostgreSQL.

If there is any supported operation (update/delete), a CSV file is dumped in an S3 bucket containing the changed record details. Amazon AppFlow checks the S3 bucket every minute and pushes the data to Salesforce.

Why AWS Lambda Was Replaced by Python on Amazon EC2

When posting data from Amazon RDS for PostgreSQL to Salesforce, you can use a Python script running on EC2 and not using Lambda.

On enabling logical replication, PostgreSQL starts logging all of the DML events to the transaction log. You can use synchronous streaming replication protocol, meaning that script continuously reads WAL for changes.

To maintain a continuous stream of changes for their solution, Trantor had to remove Lambda as it has the following shortcomings:

For solving the above-mentioned issues, Trantor chose to run Python scripts in an Amazon EC2 instance. The script continuously reads WAL for changes, writes a CSV file, and pushes it to Amazon S3.

Some of the challenges faced during replication of data from Amazon RDS for PostgreSQL to Salesforce includes:

De-duplication in case of bi-directional sync

When a new record ‘X’ is created on Salesforce, Amazon AppFlow seeks the changes and dumps a CSV to S3 containing the new record. Lambda reads the CSV file and writes the data to PostgreSQL.

As soon as the data is inserted into PostgreSQL, the WAL reports an insert operation that’s read by the Python script running on EC2, and it writes the data to the S3 bucket. AppFlow reads the CSV and pushes the data to Salesforce, creating an infinite loop where the same data is being updated to both the data sources again and again.

Whenever any records were inserted, updated, or deleted from Salesforce, the changes were filtered when inserting into PostgreSQL. Hence, the Python script on the EC2 instance only read those changes, which were performed from the Ruby on Rails application and replicated them further to Salesforce.

PostgreSQL creates a checkpoint containing the REDO point from where the WAL would be replayed in case the server crashes, or any other issue is faced. After the creation of this point, PostgreSQL flushes the previous segments. Failure to report the feedback results in ever-increasing WAL size, which would ultimately causing storage issues.

For this to function correctly, you need to send feedback to flush the Log Sequence Number (LSN) with the current LSN of the wall.

Previously, Trantor was only sending the feedback to flush the LSN when any data was inserted, updated, or deleted in the Salesforce schema. They modified the Python script to send feedback for flushing the LSN whenever data is inserted into any table in the database. This ensures PostgreSQL has the updated LSN to minimize replication lag in the logical slot.

Trantor has done some enhancements to support the delete feature from Amazon RDS for PostgreSQL and replicate it to Salesforce, which was not supported by the third-party tool.

If you delete any data from PostgreSQL, it would not be deleted from Salesforce. To achieve this, they used the simple_salesforce library for Python.

As previously mentioned, the custom Python script reads WAL for any DML operations. As soon as it encounters a delete operation, the script initializes a Salesforce object based on the table on which the delete operation is performed, and uses Salesforce API to soft delete the object from Salesforce.

The library also supports hard delete if required based on the business requirement.

The need for bi-directional syncing arises when there is frequent change of data between source and destination, and the two sources should remain consistent and synced.

The architecture described in this post helped Trantor to create a bi-directional synchronization system using AWS services. The main highlight of the implementation was Amazon AppFlow, which helped to seamlessly integrate with a SaaS application (Salesforce in Trantor’s case) using an intuitive UI.