Pressing or pressure in football is a process in which a team seeks to apply stress to the opponent player who possesses the ball. A team applies pressure to limit the time an opposition player has left to make a decision, reduce passing options, and ultimately attempt to turn over ball possession. Although nearly all teams seek to apply pressure to their opponents, their strategy to do so may vary.

Some teams adopt a so-called deep press, leaving the opposition with time and room to move the ball up the pitch. However, once the ball reaches the last third of the field, defenders aim to intercept the ball by pressuring the ball carrier. A slightly less conservative approach is the middle press. Here pressure is applied around the halfway line, where defenders attempt to lead the buildup in a certain direction, blocking open players and passing lanes to ultimately force the opposition back. Borussia Dortmund under Jürgen Klopp was one of the most efficient teams to use a middle press. The most aggressive type of pressing teams apply is the high press strategy. Here a team seeks to pressure the defenders and goalkeeper, focusing on direct pressure on the ball carrier, leaving them with ample time to select the right passing options as they have to cover the ball. In this strategy, the pressing team seeks to turn over possession by challenges or intercepting sloppy passes.

In February 2021, the Bundesliga released the first insight into how teams apply pressure with the Most Pressed Player Match Fact powered by AWS. Most Pressed Player quantifies defensive pressure encountered by players in real time, allowing fans to compare how some players receive pressure vs. others. Over the last 1.5 years, this Match Fact provided fans with new insights on how much teams were applying pressure, but also resulted in new questions, such as “Was this pressure successful?” or “How is this player handling pressure?”

Introducing Pressure Handling, a new Bundesliga Match Fact that aims to evaluate the performance of a frequently pressed player using different metrics. Pressure Handling is a further development of Most Pressed Player, and adds a quality component to the number of significant pressure situations a player in ball possession finds themself in. A central statistic in this new Match Fact is Escape Rate, which indicates how often a player resolves pressure situations successfully by keeping the possession for their team. In addition, fans get insight into the passing and shooting performance of players under pressure.

This post dives deeper into how the AWS team worked closely together with the Bundesliga to bring the Pressure Handling Match Fact to life.

This new Bundesliga Match Fact profiles the performance of players in pressure situations. For example, an attacking player in ball possession may get pressured by opposing defenders. There is a significant probability of him losing the ball. If that player manages to resolve the pressure situation without losing the ball, they increase their performance under pressure. Not losing the ball is defined as the team retaining ball possession after the individual ball possession of the player ends. This could, for instance, be either by a successful pass to a teammate, being fouled, or obtaining a throw-in or a corner kick. In contrast, a pressed player can lose the ball through a tackle or an unsuccessful pass. We only count those ball possessions in which the player received the ball from their teammate. That way, we exclude situations where they intercept the ball and are under pressure immediately (which usually happens).

Joshua Kimmich moving out of pressure and passing to the wing.

Joshua Kimmich escapes pressure by with a quick move and a pass.

Let’s look at some findings. 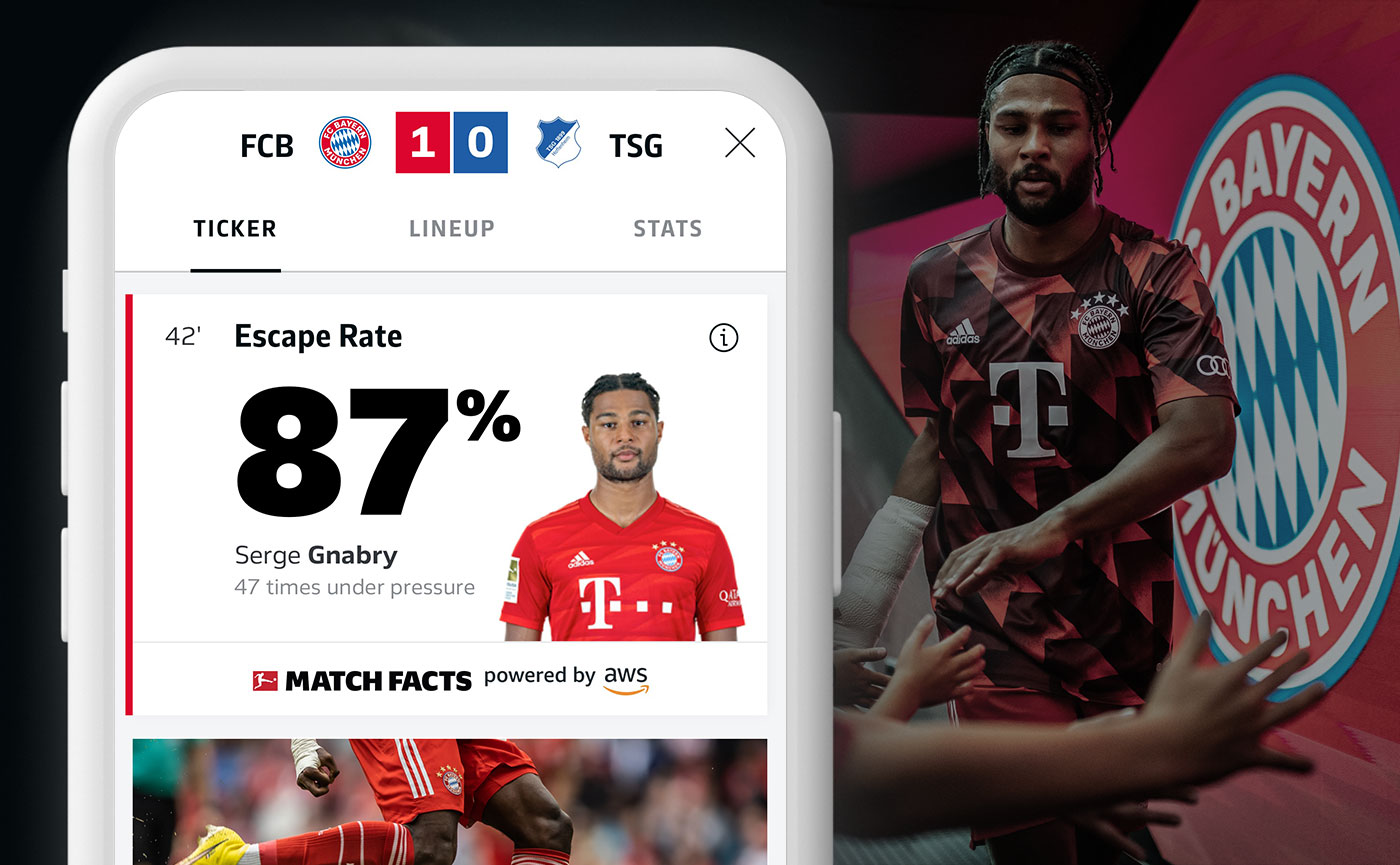 With the Pressure Handling Match Fact, players are ranked according to their escape rate on a match basis. In order to have a fair comparison between players, we only rank players that were under pressure at least 10 times.

The following table shows the number of times a player was in the top 2 of match rankings over the first seven matchdays of the 2022/23 season. We only show players with at least three appearances in the top 2.

Joshua Kimmich and Exequiel Palacios lead the pack with four appearances in the top 2 of match rankings each. A special mention may go to Lars Stindl, who appeared in the top 2 three times despite playing only three times before an injury prevent further Bundesliga starts.

How it is implemented?

Amazon MSK allows different Bundesliga Match Facts to send and receive the newest events and updates in real time. By consuming Kafka, we receive most up-to-date events from all systems. The following diagram illustrates the end-t­­o-end workflow for Pressure Handling.

Pressure Handling starts its calculation after an event is received from the Most Pressed Player Match Fact. The Pressure Handling container writes the current statistics to a topic in Amazon MSK. A central AWS Lambda function consumes these messages from Amazon MSK, and writes the escape rates to an Amazon Aurora database. This data is then used for interactive near-real-time visualizations using Amazon QuickSight. Besides that, the results are also sent to a feed, which then triggers another Lambda function that sends the data to external systems where broadcasters worldwide can consume it.

In this post, we demonstrated how the new Bundesliga Match Fact Pressure Handling makes it possible to quantify and objectively compare the performance of different Bundesliga players in high-pressure situations. To do so, we build on and combine previously published Bundesliga Match Facts in real time. This allows commentators and fans to understand which players shine when pressured by their opponents.

The new Bundesliga Match Fact is the result of an in-depth analysis by the Bundesliga’s football experts and AWS data scientists. Extraordinary escape rates are shown in the live ticker of the respective matches in the official Bundesliga app. During a broadcast, escape rates are provided to commentators through the data story finder and visually shown to fans at key moments, such as when a player with a high pressure count and escape rate scores a goal, passes exceptionally well, or overcomes many challenges while staying in control of the ball.

We hope that you enjoy this brand-new Bundesliga Match Fact and that it provides you with new insights into the game. To learn more about the partnership between AWS and Bundesliga, visit Bundesliga on AWS!

We’re excited to learn what patterns you will uncover. Share your insights with us: @AWScloud on Twitter, with the hashtag #BundesligaMatchFacts.

Simon Rolfes played 288 Bundesliga games as a central midfielder, scored 41 goals, and won 26 caps for Germany. Currently, Rolfes serves as Managing Director Sport at Bayer 04 Leverkusen, where he oversees and develops the pro player roster, the scouting department, and the club’s youth development. Simon also writes weekly columns on Bundesliga.com about the latest Bundesliga Match Facts powered by AWS. There he offers his expertise as a former player, captain, and TV analyst to highlight the impact of advanced statistics and machine learning into the world of football.

Luuk Figdor is a Sports Technology Advisor in the AWS Professional Services team. He works with players, clubs, leagues, and media companies such as the Bundesliga and Formula 1 to help them tell stories with data using machine learning. In his spare time, he likes to learn all about the mind and the intersection between psychology, economics, and AI.

Javier Poveda-Panter is a Data Scientist for EMEA sports customers within the AWS Professional Services team. He enables customers in the area of spectator sports to innovate and capitalize on their data, delivering high-quality user and fan experiences through machine learning and data science. He follows his passion for a broad range of sports, music, and AI in his spare time.

Tareq Haschemi is a consultant within AWS Professional Services. His skills and areas of expertise include application development, data science, machine learning, and big data. He supports customers in developing data-driven applications within the cloud. Prior to joining AWS, he was also a consultant in various industries such as aviation and telecommunications. He is passionate about enabling customers on their data/AI journey to the cloud.

Fotinos Kyriakides is a Consultant with AWS Professional Services. Through his work as a Data Engineer and Application Developer, he supports customers in developing applications in the cloud that leverage and innovate on insights generated from data. In his spare time, he likes to run and explore nature.

Uwe Dick is a Data Scientist at Sportec Solutions AG. He works to enable Bundesliga clubs and media to optimize their performance using advanced stats and data—before, after, and during matches. In his spare time, he settles for less and just tries to last the full 90 minutes for his recreational football team.