MXNet is integrated with Horovod through the common distributed training APIs defined in Horovod. You can convert the non-distributed training script to a Horovod world by following the higher level code skeleton.  This is a streamlined user experience where the user only has to add few lines of code to make it Horovod compatible. However, other pain points may still make distributed training not flow as smoothly as expected. For example, you may need to install additional software and libraries and resolve your incompatibilities to make distributed training works. Horovod requires a certain version of Open MPI, and if you want to leverage high-performance training on NVIDIA GPUs, you need to install a NCCL library. Another pain point you may encounter is when trying to scale up the number of training nodes in the cluster. You need to make sure all the software and libraries in the new nodes are properly installed and configured.

In this post, we demonstrate how to run distributed training using Horovod and MXNet via AWS DL Containers and the DLAMIs.

Getting started with AWS DL Containers 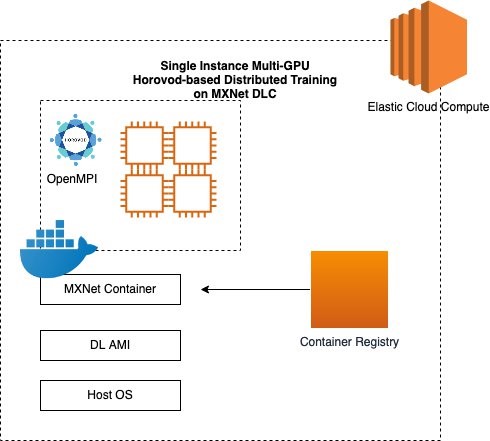 For instructions on setting up AWS DL Containers on an EC2 instance, see: Train a Deep Learning model with AWS Deep Learning Containers on Amazon EC2. For a hands-on tutorial running a Horovod training script, complete steps 1-5 of the preceding post. To use an MXNet framework, complete the following for step 6:

If the final output looks like the following code, you successfully ran the training script:

For instructions on ending the EC2 instances, execute the step 7 of the preceding post. One can follow the same steps as described above for their own training script.

Amazon EKS is a managed service that makes it easy for you to run Kubernetes on AWS without needing to install, operate, and maintain your own Kubernetes control plane or nodes. Kubernetes is an open-source system for automating the deployment, scaling, and management of containerized applications. In this post, we show you how to set up a deep learning environment using Amazon EKS and AWS DL Containers. With Amazon EKS, you can scale a production-ready environment for multiple-node training and inference with Kubernetes containers.

The following diagram illustrates this architecture:

For instructions on setting up a deep learning environment with Amazon EKS and AWS DL Containers, see Amazon EKS Setup. To set up an Amazon EKS cluster, use the open-source tool called eksctl. It is recommended to use an EC2 instance with the latest DLAMI. You can spin up a GPU cluster or CPU cluster based on your use case. For this post, follow the Amazon EKS Setup instructions until the Manage Your Cluster section.

When your Amazon EKS cluster is up and running, you can run the Horovod MXNet training on the cluster. For instructions, see MXNet with Horovod distributed GPU training, which uses a Docker image that already contains a Horovod training script and a three-node cluster with node-type=p3.8xlarge. This tutorial runs the Horovod example script for MXNet on an MNIST model. The Horovod examples directory also contains an Imagenet script, which you can run on the same Amazon EKS cluster.

Getting started with the AWS DLAMI

The AWS DLAMI are machine learning images loaded with deep learning frameworks and their dependent libraries such as NVIDIA CUDA, NVIDIA cuDNN, NCCL, Intel MKL-DNN, and many others. DLAMI is a one-stop shop for deep learning in the cloud. You can launch EC2 instances with Ubuntu or Amazon Linux. DLAMI comes with pre-installed deep learning frameworks such as Apache MXNet, TensorFlow, Keras, and PyTorch. You can train custom models, experiment with new deep learning algorithms, and learn new deep learning skills and techniques. The AMIs also offer GPU and CPU acceleration through pre-configured drivers, Anaconda virtual environments, and come with popular Python packages.

The DLAMI for Ubuntu and Amazon Linux now comes with pre-installed Horovod support with a MXNet backend. You can scale your ML model from a single GPU to multiple GPUs or a multi-node cluster using an EC2 GPU instance. You can also achieve greater scaling efficiency and higher multi-GPU training performance by using Horovod with MXNet as compared to native MXNet KVStore.

All versions of the DLAMI beginning with Ubuntu 18.04 v27.0, Amazon Linux v27.0, and Amazon Linux 2 v27.0 support Horovod with MXNet. You can use any AWS CPU or GPU machine to spin up the instance using deep learning images. It is recommended to use CPU instances of type C5, C5n, or C4 (optimized for high-performance, compute-intensive workloads) and GPU instances of type P2 and P3 (the latest generation of general-purpose GPU instances).

You can spin up the EC2 instances with AWS CloudFormation templates, the AWS Command Line Interface (AWS CLI), or on the Amazon EC2 console. For this post, we use the Amazon EC2 console. We launch an identical number of EC2 instances with the same DLAMI. We spin up the instances in the same Region, placement group, and security zone because those factors play an important role in achieving high performance. 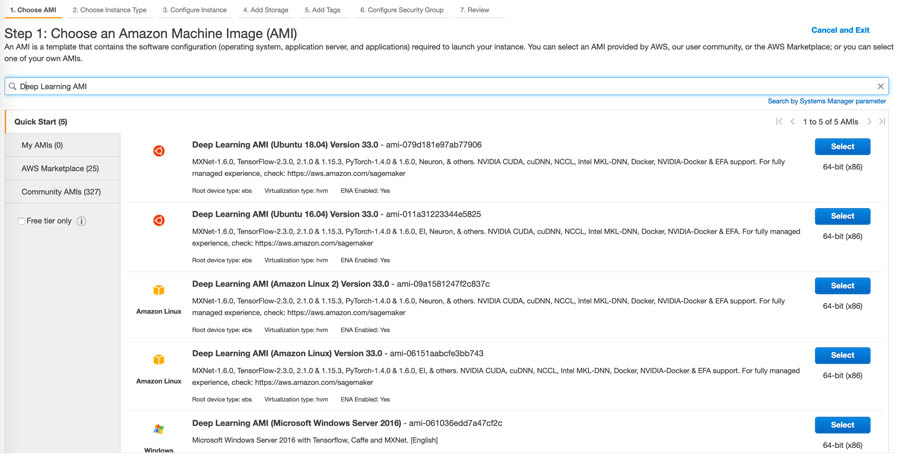 Next, we need to configure the instances.

If you don’t have a placement group, you can create one. 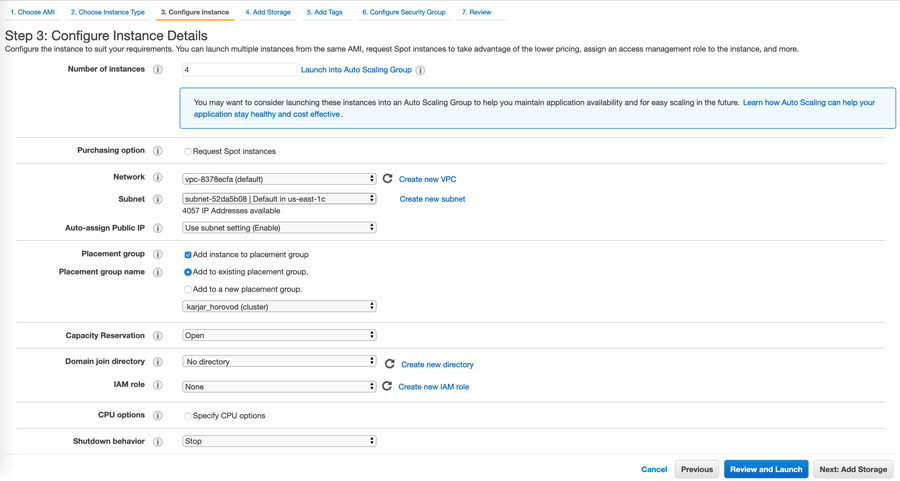 You can change this number based on your dataset size. For the demo purpose, we used the default value. 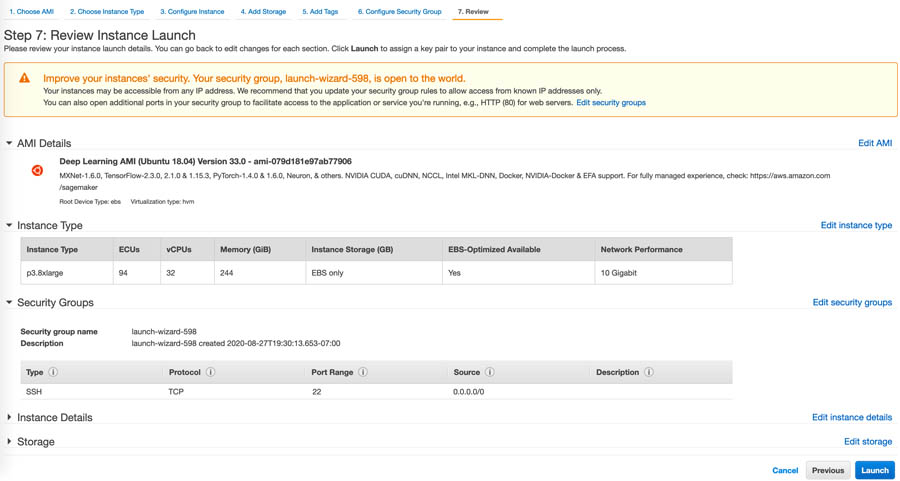 After you choose Launch, you’re asked to select an existing key pair or create a new one.

If you don’t have a key pair, choose Download Key Pair. 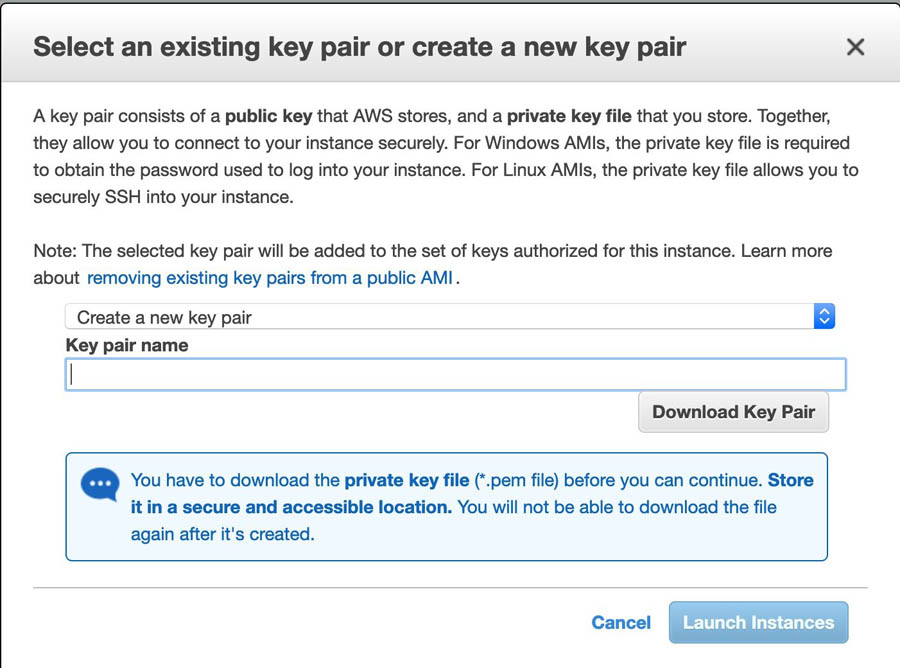 If you see a green banner message, you launched the instance successfully. 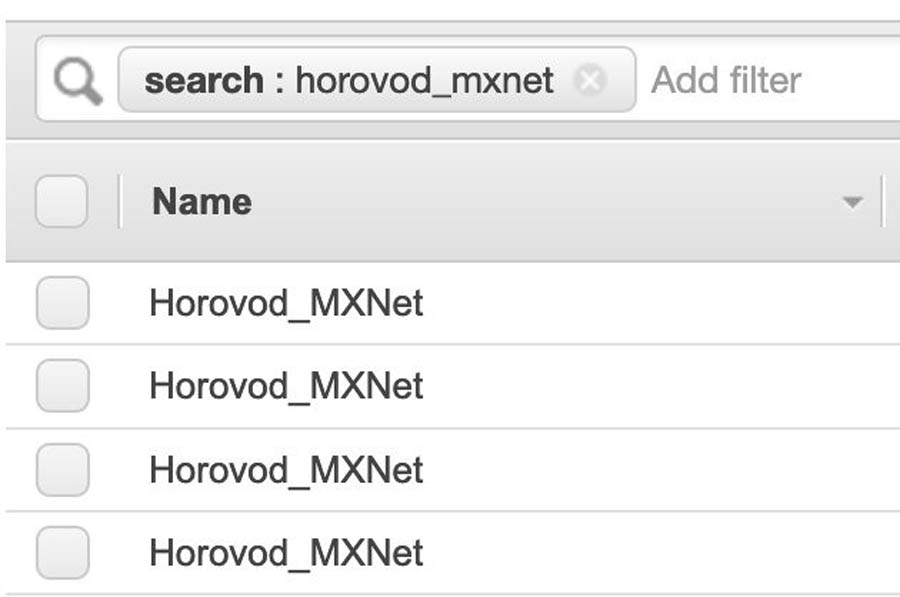 We need to do one more step in our cluster setup. All the instances should be able to communicate with each other, so we have to add our security group ID to all the instances’ inbound rules.

You can now see your inbound rules listed.

You are now done with setting up your cluster.

Horovod with MXNet training on a multi-node cluster

For Horovod with MXNet training on a multi-node cluster, complete the following steps:

For more information about the horovodrun command, see here.

The preceding code just shows how to run the Horovod training script on a multi-node EC2 instance. You can find the Horovod MXNet example script on the Horovod GitHub repo. Additionally, you can bring your own training script that’s compatible with Horovod and MXNet and train the model on a single node and multi-node cluster. To learn more about the performance comparison between Horovod and Parameter Server, this blog post illustrates the difference as ResNet50 scales from 1 to 64 GPUs.

When using Horovod, keep the following in mind:

In this post, we demonstrated how to run the distributed training using Horovod and MXNet on Amazon EC2 and Amazon EKS using AWS DL Containers and AWS DLAMI. Using Horovod, your Apache MXNet models can be distributed across a cluster of instances, providing a significant increase in performance with only minimal changes to your training script.

For more information about deep learning and MXNet, see the MXNet crash course and Dive into Deep Learning book. You can also get started on the MXNet website and MXNet GitHub examples directory.

If you are new to distributed training, we highly recommend reading the paper Horovod: fast and easy distributed deep learning inTensorFlow. You can also install Horovod, build Horovod with MXNet, and follow the MNIST or ImageNet use case. You can find more Horovod MXNet examples in GluonCV example and GluonNLP example on GitHub.

Chaitanya Bapat is a Software Engineer with the AWS Deep Learning team. He works on Apache MXNet and integrating the framework with Sagemaker, DLC and DLAMI. In his spare time, he loves watching sports and enjoys reading books and learning Spanish.

Karan Jariwala is a Software Development Engineer on the AWS Deep Learning team. His work focuses on training deep neural networks. Outside of work, he enjoys hiking, swimming, and playing tennis.