With consumer adoption of OTT services and viewing of live sporting events on mobile devices at an all-time high, content creators and distributors are working hard to fine-tune their infrastructures and workflows to meet demand. For many, this has meant leveraging the flexibility and scalability of cloud-based computing and artificial intelligence (AI)-powered services, which require less capital cost and facilitate experimentation with new channels and mobile-first services.

At the recent 2019 NAB Show, a keynote panel, “Beyond the Field: How Sports Pioneers are Powering the 360 Audience Experience in the Cloud” brought together several leading media companies to discuss their strategies for servicing sports fans across multiple delivery platforms. 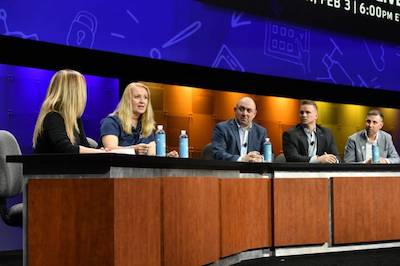 Frelund kicked off the discussion, reflecting on how a lot of professional sports teams in the U.S. now use cloud-based analytics and AI to help them better understand their own team’s tendencies — and how they can use that to do better against their opponents. This same data-driven concept has swept the content world as well, helping media companies produce and deliver content more efficiently and with better accuracy.

“The NFL pioneered next-gen stats with AWS, so it’s pretty cool to see these relational GPS data points being put together that help us tell deeper stories,” Frelund said, adding that she writes her own code using AWS tools. “For me, it’s all about the why and the storytelling. We’re starting to get deeper and deeper answers and the reason why is because we are looking at data in new and interesting ways.”

CBS Sports Digital’s Lone, who is in charge of engineering for all of the network’s online sports platforms (including the newly launched CBS Sports HQ streaming service), talked about CBS Sports’ live stream of Super Bowl LIII on February 3, 2019. She said the digital stream set viewership records, including 7.5 million unique devices, which was 20 percent higher than last year, with viewers consuming more than 560 million total minutes of live game coverage, up 19% from last year. The average minute audience of 2.6 million viewers during the game window was also up 31% year-over-year.

“CBS only gets to stream the Super Bowl every three years,” she said. “In 2017, the focus was on the desktop experience. This time we had the rights to mobile. We looked at all of our platforms and made sure they had failover options so that they were as reliable as the linear broadcast. Consumers don’t care about packets or how they get the feed; they only care that they don’t want to miss a touchdown. Period.”

To make this experience a great one for fans, Lone and her team created an entirely new playbook which incorporated AWS services, including AWS Elemental MediaStore, a storage service optimized for media that provides the performance, consistency, and low latency required to deliver live streaming video content.

“We stream 35,000 live events per year and we would not be able to do that without the AWS Cloud and its ability to scale,” Lone said. “We also have 24/7 live channels that we need to support. In the beginning of 2018 we basically started from scratch and said ‘we’re going to build everything natively in the cloud, because there’s no way to buy that much hardware and infrastructure to keep up with that many events.’ And, by the way, we had to have it all done in seven months with a limited budget.”

Her team took a step-by-step approach and created a hybrid cloud/on-premise infrastructure for the Super Bowl, applying cloud services everywhere it made sense.

“We worked with AWS and their (AWS) Elemental encoders … they made an HLS output-locking feature for us so we could have multiple redundant streams,” Lone said. “And we could literally seamlessly switch from stream to stream and the consumer would never see any latency, lag or buffering.” CBS Sports Digital also employed the AWS Direct Connect service, as Lone notes, “…we had ‘direct connects’ from (AWS) Elemental Live encoders into multiple MediaStore regions, and this is where AWS features like disaster recovery really helped make the consumer experience so good.”

As Vice President, Software Development for Hulu, Rafael Soltanovich is responsible for all of the services and technology that power consumer experiences. The OTT service provider added live sports content in 2017 and, according to Soltanovich, it has seen subscribers increase significantly.

“No TV service is complete without live sports,” he said. “And we can’t compete in sports without the cloud.”

Soltanovich spoke about the importance of AWS in allowing them to easily and predictably scale up capacity for large sporting events, particularly NFL football, then scale back down when the demand subsides.

“The cloud shines for scaling,” he said. “The thing we have learned about live services is that fans like live sports, but they love football. Our concurrent peak streams during football games are the most we experience for any event. So, we had to get good at serving up the games live in a hurry. It’s one thing to run a live event online that you can prepare for and scale. It’s another thing entirely to run a linear channel where you may have a program where only 10 or 50,000 people are watching and then you switch to a Super Bowl where millions are watching in a split second. It’s a challenge.”

So, how do you plan for that? At Hulu they use mathematical analysis and AWS to forecast what the usage of an upcoming live event is going to be. The company now does that on a weekly basis and, Soltanovich said, can reliably predict what the viewership is going to be for any one event.

“We’ve gotten good enough that in the last year that we typically come within five percent of determining the actual concurrent usage that occurs,” he said. “Beyond that, working closely with AWS and our systems, we’re able to pressure test them on a weekly basis so that at any given time we are able to scale to five times the peak or ten times the peak. And the numbers have been growing significantly. If you compare the Super Bowl, the number of concurrent users we saw was four times what it was last year. And we expect that number to continue to increase.”

Scott Sonnenberg said that the L.A. Clippers’ owner, Steve Ballmer, is “all-in” on using AWS and Amazon artificial intelligence services to give fans an exclusive experience within the basketball arena and at home. In an L.A. Clippers video shown during the panel discussion, Ballmer noted: “There’s such an opportunity to change the way people experience sports by using technology. What if we could actually diagram what plays are going on because they can recognize it in real time? What if we could show the probability of a shot going in?”

The team recently launched Clippers CourtVision, powered by AWS technology, which allows fans to do just that and a lot more. Clippers CourtVision lets viewers switch between different cameras angles and audio options, watch three Modes with different and unique live, augmented graphical overlays and access on-demand content. Fans can personalize their experience on their mobile device or computer via Mascot Mode, which features animated graphics and pop-ups; Coach Mode, which shows plays diagrammed on their screen in real time and Player Mode, which overlays statistics and real-time probabilities over live game action. These features are made possible by cameras that have been installed in the ceiling of all NBA arenas that capture the action from above. AWS machine learning and data analytics services advance the analyses and drive the Clippers CourtVision experience.

“We rely on AWS to help guide us as to what our fans are interested in,” Sonnenberg said. “We believe our Clippers CourtVision will change the way sports will be watched. It gives you a lot of options. We have an owner that challenges us to improve the experience both inside the stadium and for consumers at home or on the go. We’re starting with the Clippers but a lot of teams are interested in this technology because it helps tell the story of the game in much more detail.”

Finally, Mark Kramer of Pac-12 Networks spoke about the use of AWS services for reducing his content creation and delivery costs, and providing new kinds of viewing experiences across a wide range of collegiate sports. Pac-12 Networks has pioneered the “At-Home” remote production model, in which much of the signal processing happens in the cloud.

“Our mission is to connect fans to the universities and sports that they love,” Kramer said. “And we do that by broadcasting 850 live events each year on our seven linear networks and in our TV everywhere Pac-12 Now app. We also do hundreds of digital-only events. It’s a lot more sports than football.”