In this post, I demonstrate a solution for deploying a highly available and fault tolerant web service with managed certificates and TLS termination performed on customer-managed EC2 Nitro instances using ACM for Nitro Enclaves.

Amazon Web Services (AWS) provides services that help you simplify the process of building and operating secure workloads and applications in the cloud. With Elastic Load Balancing (ELB) you can terminate HTTPS and TLS traffic from clients at your load balancer while AWS Certificate Manager (ACM) manages the complexity of creating, storing, and renewing public and private SSL/TLS X.509 certificates and keys that protect your AWS websites and applications. In this architecture, the load balancer performs the work of encrypting and decrypting the traffic before forwarding it on to its destination. ELB can configure load balancers to forward traffic on to the target Amazon Elastic Compute Cloud (Amazon EC2) instances using HTTPS/TLS for encryption in transit.

Some workloads have specific security and compliance requirements that necessitate terminating directly on backend instances. ELB supports TLS termination at the application using Network Load Balancers and Classic Load Balancers with TCP passthrough. TCP passthrough relays requests to the target EC2 instances as-is. In the past, using TCP passthrough for HTTPS/TLS traffic meant that you needed to implement a system for managing the provisioning, storing, and renewing of SSL/TLS X.509 certificates. You cannot install your ACM-issued certificates directly on an arbitrary AWS-based website or application. ACM certificates can only be installed on an integrated service such as ELB, Amazon CloudFront, or Amazon API Gateway. With the release of AWS Nitro Enclaves and its ACM for Nitro Enclaves integration, you are able to install ACM certificates in your application instance’s enclave and use it to terminate HTTPS/TLS at your application.

Enclaves are separate virtual machines, hardened, and highly constrained. They have no persistent storage, no interactive access, and no external networking. So even if you are a root user or an admin user on the instance, you are not able to access or SSH into the enclave. Nitro Enclaves use the proven isolation of the Nitro Hypervisor to further isolate the CPU and memory of the enclave from users, applications, and libraries on the parent instance. The only way to communicate with the enclave is through the local vsock socket from the parent instance attached to the enclave. With this, you are able to isolate the processing of highly sensitive data within your Amazon EC2 instances from your own internal administrators, developers, and other Amazon EC2 instances.

ACM for Nitro Enclaves allows you to use public and private SSL/TLS certificates with your web applications and web servers running on Amazon EC2 instances with AWS Nitro Enclaves.

NOTE: At this time, Apache HTTP server’s built-in support for PKCS#11 does not work with ACM for Nitro Enclaves.

You can get end-to-end encryption via ACM for Nitro Enclaves in your own AWS account using the automated ACM for Nitro Enclaves sample application. This sample automates the deployment of a web application hosted on an autoscaling group of EC2 instances behind a Network Load Balancer. Each EC2 instance is configured with a Nitro Enclave running the ACM for Nitro Enclaves application for TLS offload from a NGINX webserver via the vsock connection. The sample automatically provisions an ACM certificate for a specified hostname in a Route 53 Public Hosted Zone and configures that certificate with KMS permissions so it can be accessed in plaintext only from within the provisioned enclaves. Users send requests to the specified hostname and an NLB passes those requests through one of the EC2 instances. The EC2 hosts then decrypt those user requests via the webserver/enclave. 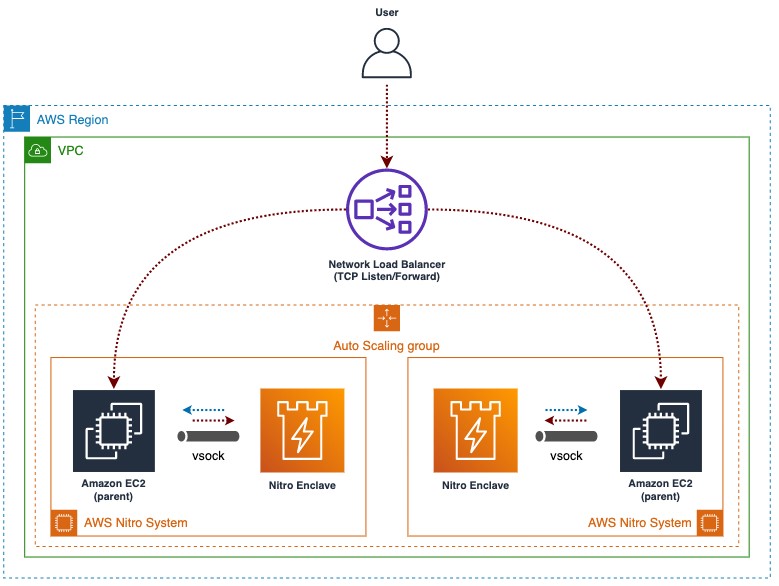 This solution deploys the following components:

Note: For simplest deployment, you can create an AWS Cloud9 environment; it already has the below requirements installed:

Note: You need a volume with additional free space to complete the sample deployment. I recommend 10-20GB of additional volume space.

To deploy the sample:

1. Clone the aws-nitro-enclaves-certificate-manager-sample repository to your local workstation or to your Cloud9 environment using the following command:

2. Change directories to the root directory for this example solution using the following command:

4. Deploy the sample using the SAM CLI guided deploy command. Replace each required user input placeholder with your own information.

Note: You can provide a custom value in place of a default. For example, the AWS Region argument can be set to an alternate region to change the region in which the sample resources are deployed. The SSMConfig argument can be set to true in order to enable configure your instance role for management through AWS Systems Manager Quick Setup. 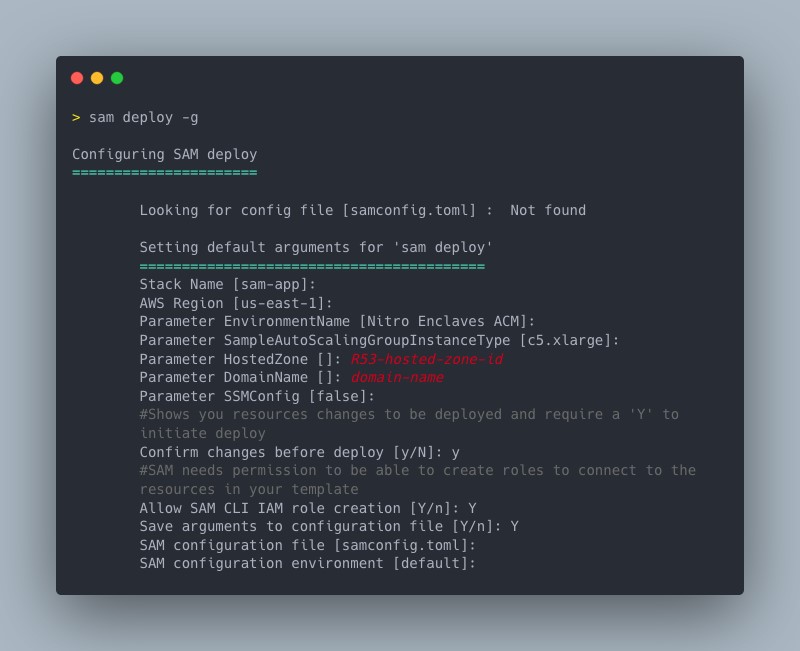 Once deployed the solution outputs a URL for the sample. After a few minutes, try visiting that URL. Once the solution has finished its initial configuration you are able to view the sample webpage over HTTPS secured by an ACM issued certificate stored in the enclave of each Amazon EC2 instance in the autoscaling group. 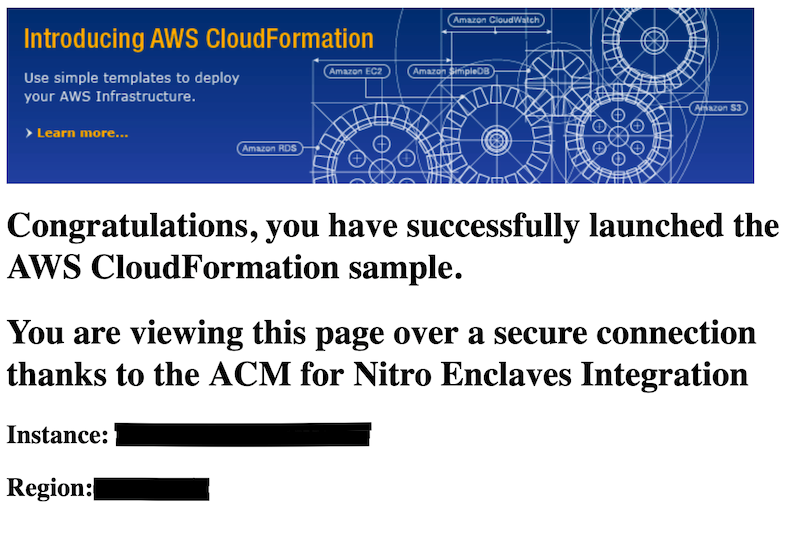 Figure 3: A sample webpage served by the AWS for Nitro Enclaves sample application

Once you’re done, you can delete the solution going to the AWS CloudFormation console and deleting the nitro-enclave-acm stack. Don’t forget to delete the following artifacts too:

Check out more resources, tips and tricks, tutorials, and news on the cloud for the public sector. If you have a question or comment, please post in the comments section below and let us know what you think or contact us.