How to Use AWS Service Catalog for Code Deployments: Part 2 of the Automating HIPAA Compliance Series

In my previous blog post, I discussed the idea of using the cloud to protect the cloud and improving healthcare IT by applying DevSecOps methods. In Part 2 today, I will show an architecture composed of AWS services that gives healthcare security administrators necessary controls, allows healthcare developers to interact with the system using familiar tools (such as Git), and leverages AWS managed services without the need for advanced coding or complex configuration.

The following architecture diagram shows what I will build in this post. The centerpiece of this system is AWS Service Catalog, which is an AWS service that provides a single location where healthcare organizations can centrally manage catalogs of IT services. With AWS Service Catalog, healthcare security administrators can control which IT services and versions are available, limit the configuration of the available services to what is covered under the AWS Business Associate Agreement (BAA), and delegate permissions access by developer or role. 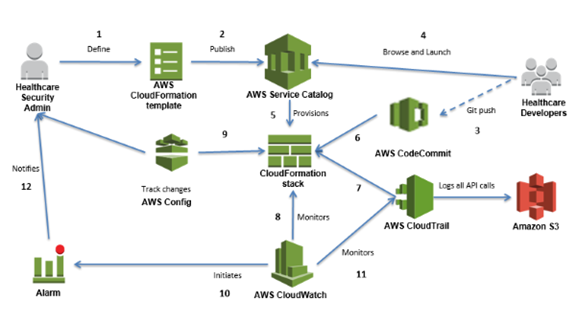 Before diving into the details of how to set up the individual elements of this architecture, I will walk you through the previous diagram and provide a basic overview of how the AWS services fit together to help you manage the lifecycle of your healthcare environment:

Now that I have reviewed the overall healthcare architecture diagram, I will jump into the details of how to implement this architecture. I will start with the tasks that would typically be performed by our healthcare security administrators.

From the Management Tool section of the AWS console, the administrator should choose AWS CloudTrail, click Get Started Now, name the S3 bucket in which to store the logs, and then click Turn On. When turned on, API-level logging is enabled for the entire region. It is a best practice to turn on logging in all regions, even if your organization does not plan to use all regions available. As a healthcare security administrator, you want the ability to review all activity and API calls, in the event a region is being used when it should not be. In fact, you may even want to trigger alarms if API calls show up in unexpected regions.

Next, choose AWS Config from the AWS Management Console, and follow the on-screen instructions to set up the service. You can follow these steps if you have questions as you walk though the setup. You will know this task is complete when you see on the right side of the screen that Recording is on.

Set up the healthcare developer accounts

Create a healthcare developer IAM group with the policy AWSCodeCommitPowerUser (as shown in the following screenshot). This policy gives your developers the ability to perform most tasks with the source control service, but it does not give them the ability to delete projects. In addition, add the ServiceCatalogEndUserAccess policy. Specify the products the team has access to in AWS Service Catalog itself. This policy gives the members of the group the ability to use the service as end users.

Set up a healthcare web server in AWS Service Catalog

Note: I have provided this CloudFormation template as a basic starting point and example of how you can leverage tools to support healthcare needs in a DevSecOps environment. You should customize this template for your own environment.

Now that you have created both your portfolio and your product, confirm that the product name now appears under the Products heading on the portfolio page. From this same portfolio page, give two sets of permissions: 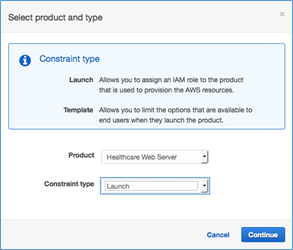 The IAM role will not only need to contain the permissions to perform all the tasks of the CloudFormation template used in the product, but it will also need to be able to assume the role of the AWS Service Catalog.

If you do not currently have an AWS Service Catalog role set up, you can create this role by returning to the IAM console and following these steps:

A launch role defines which actions our CloudFormation template can perform in AWS Directory Service. To attach a policy to the new launch role:

See Applying Launch Constraints for more information about how to apply the correct privileges to the CloudFormation templates that underlie AWS Directory Services.

Congratulations! You have set up a DevSecOps infrastructure that utilizes AWS Service Catalog for automated deployments of healthcare web servers.

Now that you have configured the DevSecOps infrastructure, the development team can take advantage of automated deployments while knowing that their underlying infrastructure has been set up in a controlled environment by their healthcare security administrator. The following steps demonstrate how a healthcare developer might interact with this architecture.

Before you try to run any of the commands associated with CodeCommit, first verify that you have the correct version of the AWS CLI by running the following command.

If the output is documentation, you have a CLI version that contains CodeCommit. If your CLI version does not include CodeCommit, download the latest version of the CLI. Also be sure that you install Git.

When you are ready to start a new project, create a new CodeCommit repository by running the following command from the CLI.

The response will be similar to the following.

Step 2: Connect to your CodeCommit repository

Developers can connect to a repository in a variety of ways, but for this example, I will use the cloneUrlHttp URL that is highlighted in red in the preceding code. The CLI keys will perform authentication.

Note: If you are an OS X user and are experiencing issues with Git asking for passwords after running these commands, see Setup Steps for HTTPS Connections to AWS CodeCommit Repositories on Linux, OS X, or Unix.

If you currenlty use Git, the process of pushing code to CodeCommit should be familiar to you. If you are not familiar with Git, see this tutorial to get started. However, all the Git commands needed to follow along with the remainder of this post can simply be copied and pasted from the code snippets that follow.

From within the directory, run the following commands, replacing the URL that is highlighted in red with the cloneUrlHttp you created in Step 2.

Review this push by using the CodeCommit console. You will see a page similar to what is shown in the following image, which displays a single-file Git repository that contains an index.html file.

As a healthcare developer, sign in to the AWS Management Console, and choose Service Catalog. You will see only the end-user view of the console, which will contain the list of products that have been set up for you by the healthcare security administrator. The following image shows the products available from a developer’s point of view.

Select the Healthcare Web Server check box. Click Launch Product and name the stack something meaningful to you.

As shown in the following image, you are now prompted for Healthcare Web Server parameters as requested via the CloudFormation template, which was used by the healthcare security administrator. 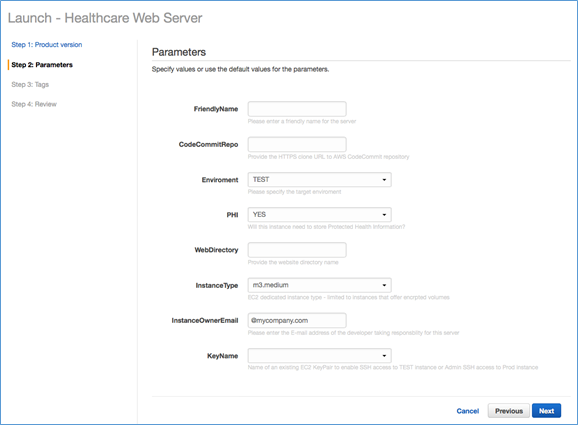 Each of these parameters is explained in the following list:

After you have populated the fields and launched the stack, after a few minutes you should be able to review the output, as illustrated in the following image.

Click the Value (link) for CompliantWebsiteURL, and you will be taken to the website that you just created. 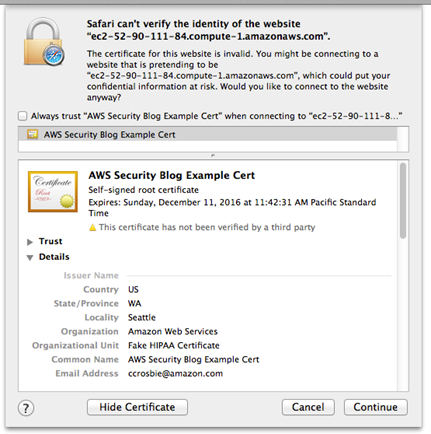 After you acknowledge this one-time exception by clicking Continue and verify that your connection is not actually private, you will be taken to the website deployed from your Git repository.

You have now successfully deployed your code to a healthcare website without direct intervention from the security team, but with the assurance that a security administrator has properly set up your web server to meet the correct compliance requirements.

Even though the web server and code were deployed entirely by the healthcare developer, the healthcare security administrator can still have complete oversight into their environment.

The developer does not have the ability to use the EC2 console, but the security administrator can review the server that was just created, who created it, and for what purposes it will be used. For example, the following screenshot shows that this server instance was created for the production environment and will not store PHI.

Along with the EC2 instance, other items such as ubiquitous and centralized logging using Amazon CloudWatch were set up as well, which you can see an example of in the following image.

Additionally, AWS Config is now recording the state of our healthcare web server, as shown in the following image.