Threat actors increasingly employ automation to breach defenses and act on their objectives. Indeed, malware-as-a-service is a prosperous business, with the micro-perimeter network very often being the first line of attack.

Securing customer workloads against these attacks has largely focused on identity and access management (IAM), log aggregation, and processing to uncover threats after the fact. However, it’s at the application-layer that advanced malware/non-malware threats increasingly look to compromise hybrid enterprise networks.

These threats directly attack web-facing workloads, they move laterally from on-premises networks to virtual private clouds (VPCs), and they attack supply chains built from open source libraries in machine-generated traffic, all in a matter of seconds.

To defend against such threats, security teams have been deploying signature-based intrusion detection systems (DS), antivirus tools, and sandboxes.

However, the slow and reactive nature of such tools makes them particularly ill-suited to the velocity of cloud workloads and threats posed to them. Detecting and responding to such threats requires real-time packet-level inspection and deep analysis capabilities.

The shared responsibility model for security at Amazon Web Services (AWS) secures the underlying infrastructure and relies on customers to secure their own workloads.

In this post, we will show you how to design an effective defense against the current threat landscape using a combination of native AWS capabilities and services with Blue Hexagon’s next-gen Network Detection and Response (NG-NDR) security tool powered by deep learning artificial intelligence (AI).

Using the AWS CloudFormation templates this post links to, you can deploy the entire stack in minutes, and manage it as code end-to-end, resulting in continuous and automated VPC network security that is scalable and reliable.

All architectural solutions described here are available as AWS CloudFormation templates that you can deploy in your AWS accounts.

The solution architecture consists of three distinct components, deployed and managed as code stored in a CloudFormation template. 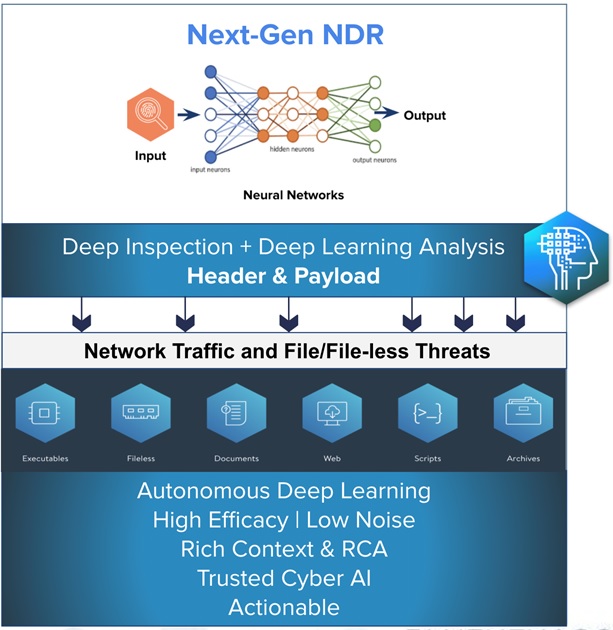 For example, assume an attacker has discovered your Secure Shell (SSH) key in a public repository, runs a port scan to discover accessible instances of Amazon Elastic Compute Cloud (Amazon EC2), and tries to install Coinminer malware on them.

When this happens, Blue Hexagon detects, in real-time:

Deep learning models running in the virtual appliance deliver verdicts in under a second, together with predicted attacker tactics, techniques, and procedures (TTPs) mapped to the MITRE ATT&CK framework.

You can deploy Blue Hexagon NG-NDR for AWS as either a standalone Amazon EC2 virtual appliance or in high-availability mode. 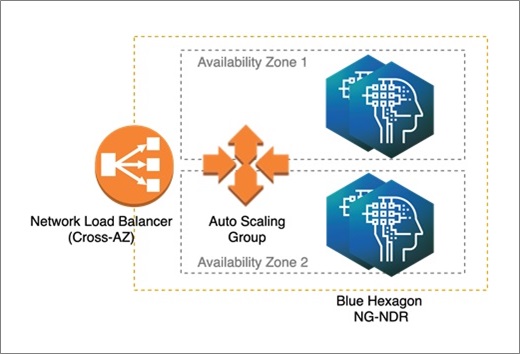 A high availability deployment of NG-NDR consists of:

Depending on how Blue Hexagon is deployed, the VPC traffic mirroring target is registered appropriately:

To get started with Blue Hexagon NG-NDR, you can sign up for a free trial and get a license key to deploy Blue Hexagon in your environment.

Note that if you wish to trial and deploy Blue Hexagon at a later date, you can still follow the steps in the remainder of this post by selecting “no” to the question “Do You Have a Valid Blue Hexagon License Key?” in the CloudFormation stack.

Selecting “no” will launch an instance from an Amazon Linux AMI into which you can login as the ec2-user with the SSH key selected at stack deployment time. VPC Traffic Mirroring will mirror all traffic to the instance, which you can inspect using tcpdump or other tools. 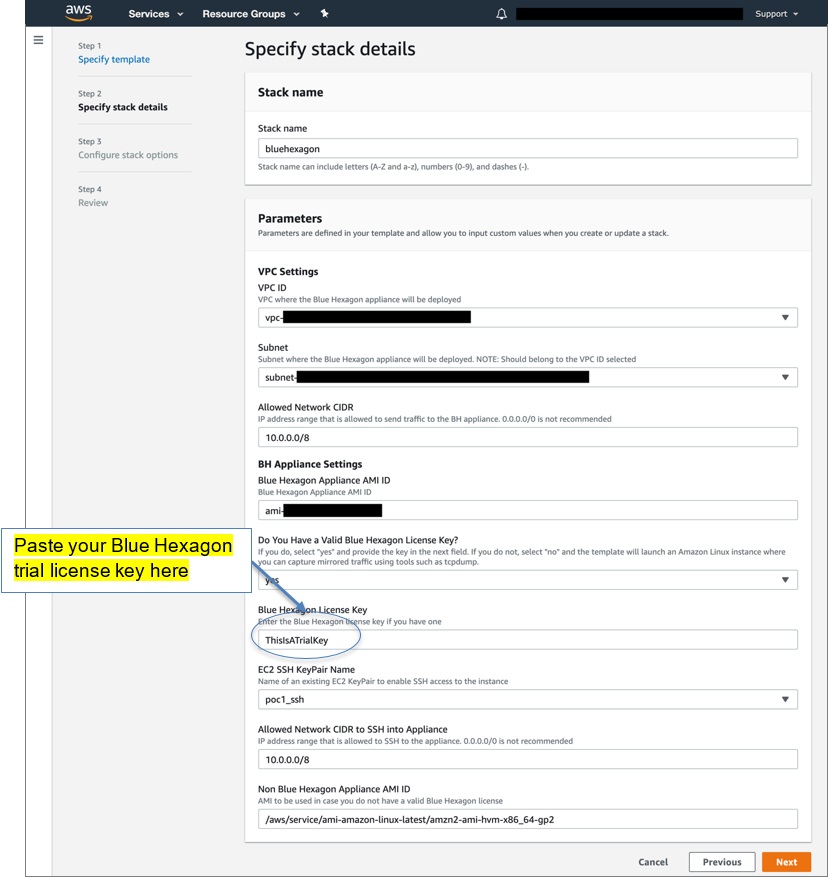 AWS provides powerful networking primitives such as VPC traffic mirroring and VPC ingress routing to get packet-level visibility into network traffic entering or leaving the subnets in a VPC.

You can leverage these AWS networking primitives using multiple architectural patterns. To illustrate, I’ll use two VPCs while discussing these patterns:

Although you can deploy security tools in a subnet within the monitored VPC, it’s a best practice to deploy the security tool in an isolated VPC; preferably in a separate account altogether.

AWS provides primitives, such as VPC peering, to facilitate such isolation and copy mirrored traffic from the monitored VPC to the security VPC.

Note that the architectural patterns discussed below can be composed with the aforementioned AWS networking primitives to create more complex security monitoring architectures on a larger scale, possibly involving use of AWS Transit Gateway.

Pattern One − Mirror at the Source

Figure 4 shows a variety of workloads running in both public (reachable from the internet) and private subnets.

These workloads may be web applications deployed in an Amazon Elastic Kubernetes Service (Amazon EKS) cluster. They may also be Amazon EC2 instances running custom services and applications or just serving as Linux/Windows virtual desktops. 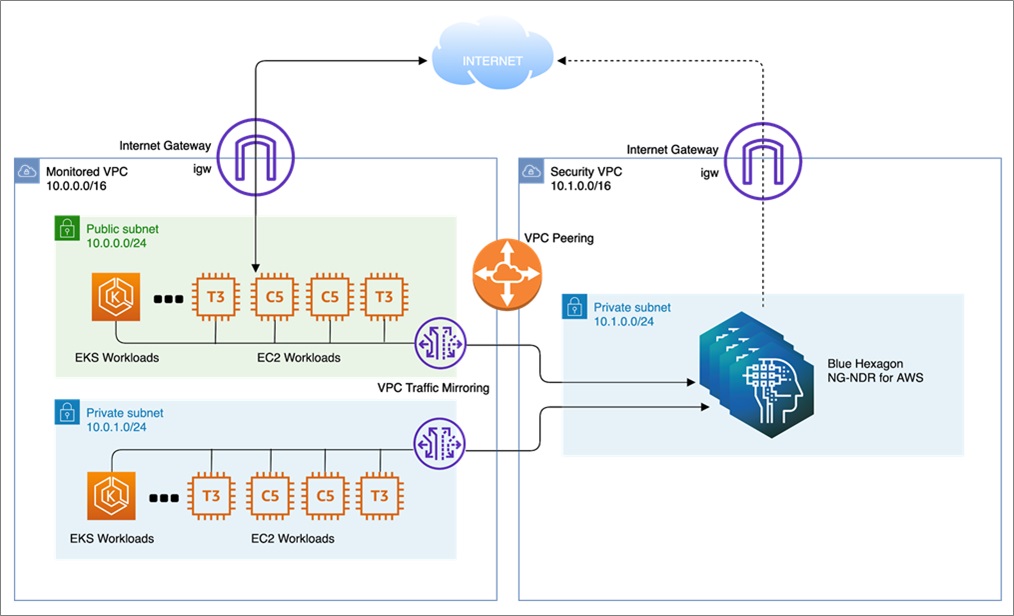 To monitor network traffic hitting the elastic network interfaces attached to these workloads, you can create VPC traffic mirroring sessions in the AWS VPC console by specifying:

AWS provides a serverless application to automate setting up traffic mirroring based on VPCs, subnets, or tags as input. See the instructions to deploy the application.

When setting up VPC traffic mirroring, keep in mind that:

More considerations are available in the AWS documentation.

Caught in the Wild

At the start of one of Blue Hexagon’s trials, the prospect turned on VPC traffic mirroring for EC2 instances in their private subnet and directed the traffic to Blue Hexagon.

Inspecting the TLS traffic patterns, Blue Hexagon detected the instance was pre-infected and was beaconing out to a C&C server in a foreign country, as shown in the Blue Hexagon threats view below.

You may also run workloads in managed services that cannot be mirrored directly via VPC traffic mirroring. In such cases, a natural solution is to mirror the elastic network interfaces of the choke point, which could be a next-gen firewall or a third-party gateway appliance. 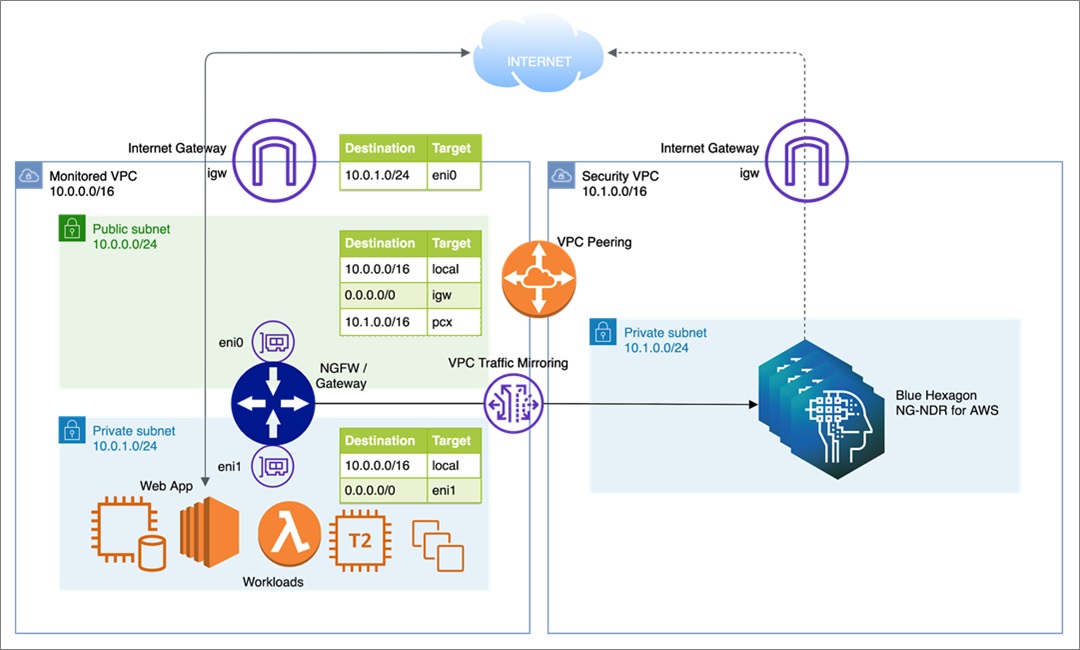 Through VPC ingress routing, all incoming and outgoing traffic to or from an internet gateway or virtual private gateway can be routed through the gateway appliance.

Figure 6 above shows how all traffic originating from or destined for your workloads in the subnets in the monitored VPC can be mirrored at a single point—the gateway—and sent to Blue Hexagon in the security VPC for real-time threat detection and response.

To create the monitored VPC shown, launch the CloudFormation stack below:

The monitored VPC has two subnets, corresponding route tables with VPC ingress routing through a vanilla Linux-based gateway EC2 instance, and VPC peering to the security VPC in which Blue Hexagon is deployed. 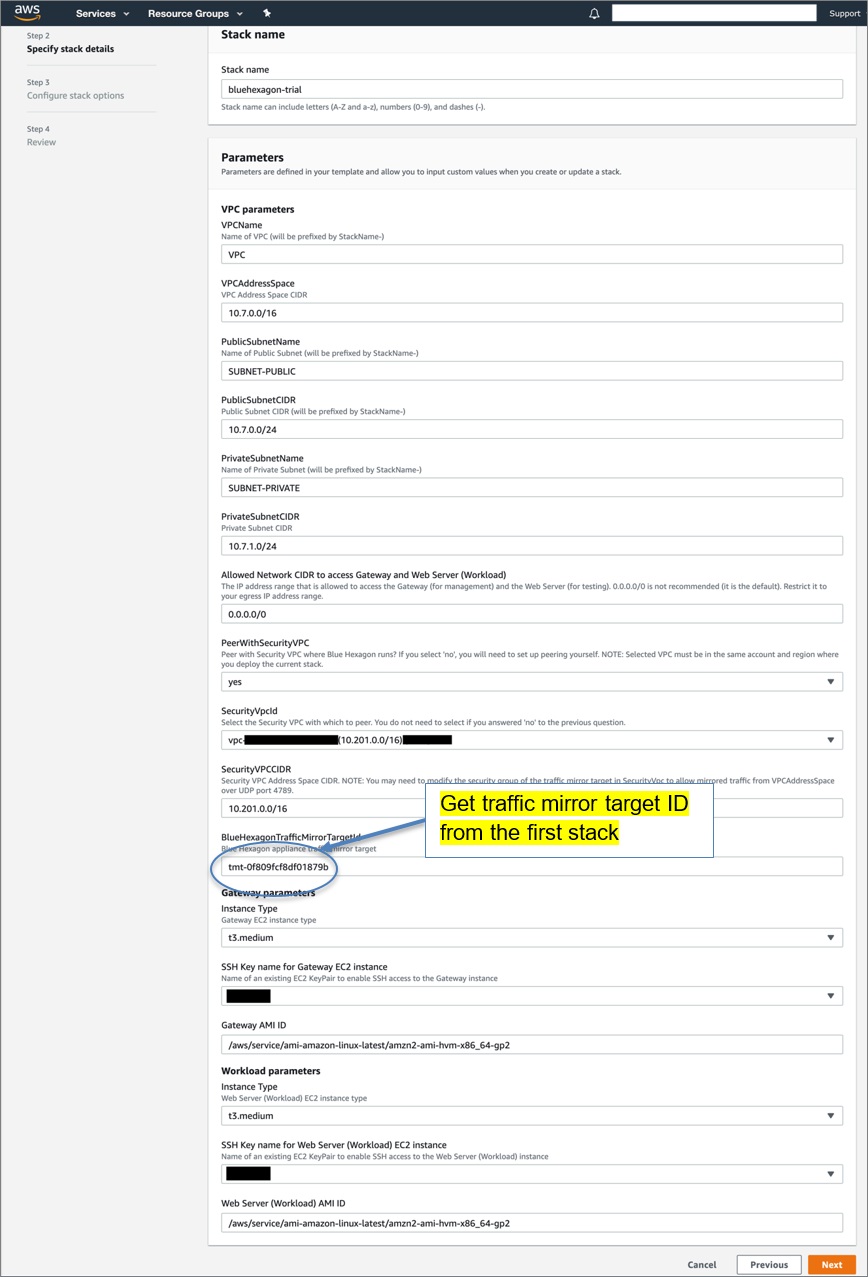 The CloudFormation template also brings up a file management web application with a public IP address running in the private subnet of the monitored VPC. Try uploading/downloading suspicious files to/from the web application, and see Blue Hexagon make verdicts on them instantly.

VPC traffic mirroring mirrors all web application traffic flowing through the gateway and sends it to Blue Hexagon for inspection. Figure 7 shows the web application with two suspicious files uploaded by an anonymous user.

Blue Hexagon instantly convicts both files as ransomware and trojan respectively. In addition to the classification, Blue Hexagon provides concrete network Indicators of Compromise (IoCs) as well as AI-predicted IoCs that are mapped to MITRE ATT&CK TTPs. These can be found by clicking on any threat in the threats view shown below. 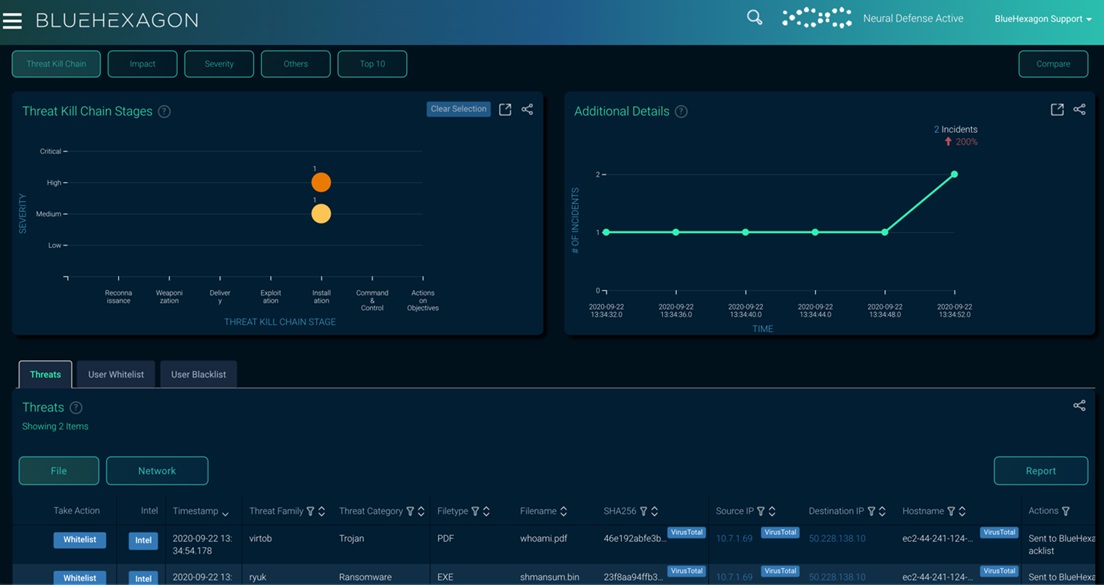 Caught in the Wild

Emotet is an infamous banking trojan that serves as a delivery vehicle for other malware. Hackers are constantly evolving Emotet to bypass traditional defenses, with new variants using PDFs containing links to weaponized Word documents.

The PDF itself appears benign to traditional defenses and avoids detection on delivery; once the message is past the firewall and in a user’s inbox, the malicious URL is more likely to be clicked.

Using ensembles of deep learning models, Blue Hexagon was able to convict every stage of the kill-chain in less than a second, preventing infection of the end-user asset.

Upon detecting a threat, Blue Hexagon instantly sends a finding to AWS Security Hub. Once configured for custom action, AWS Security Hub emits an Amazon CloudWatch event that triggers a Lambda function to automatically perform the custom remediation action on your behalf. 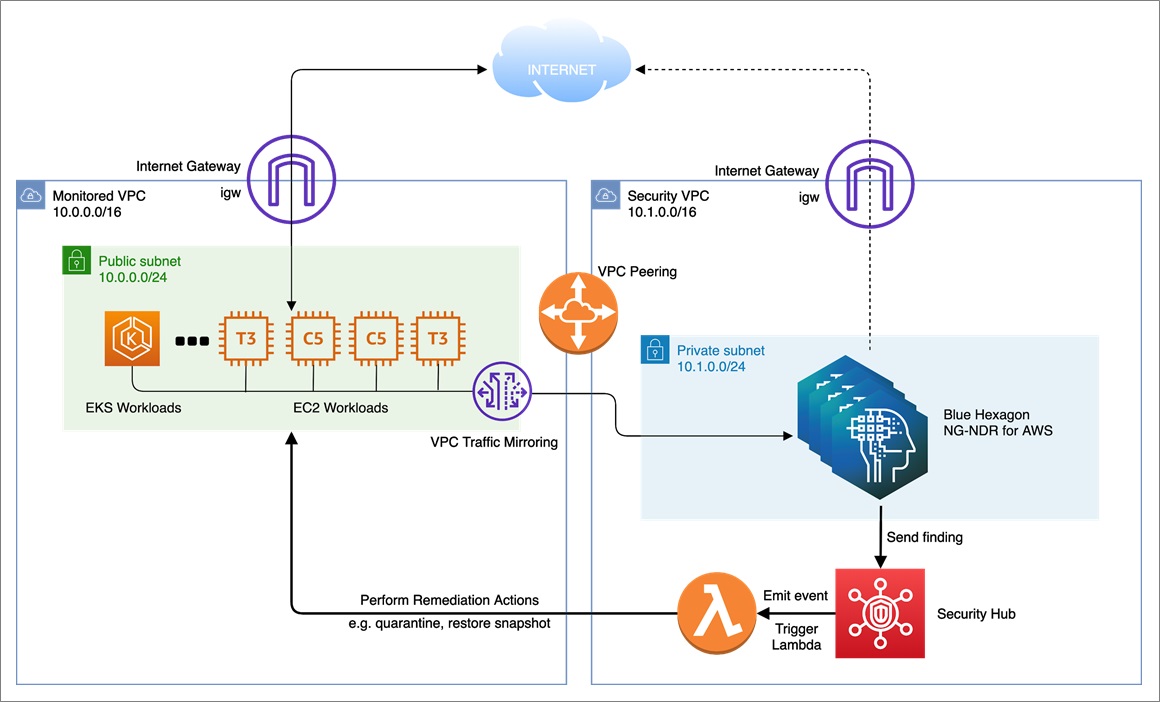 Such actions could include quarantining the infected EC2 instance, doing a memory dump, or snapshotting the Amazon Elastic Block Store (Amazon EBS) volume for digital forensics and investigation. They could also include cutting off the infected subnet to prevent lateral movement or restoring persistent data to pre-infection snapshots. 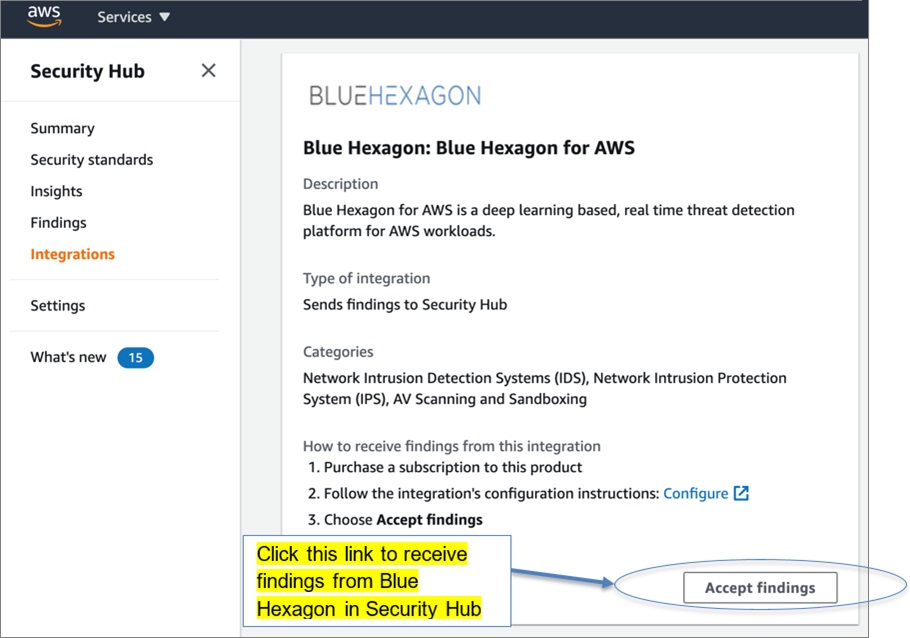 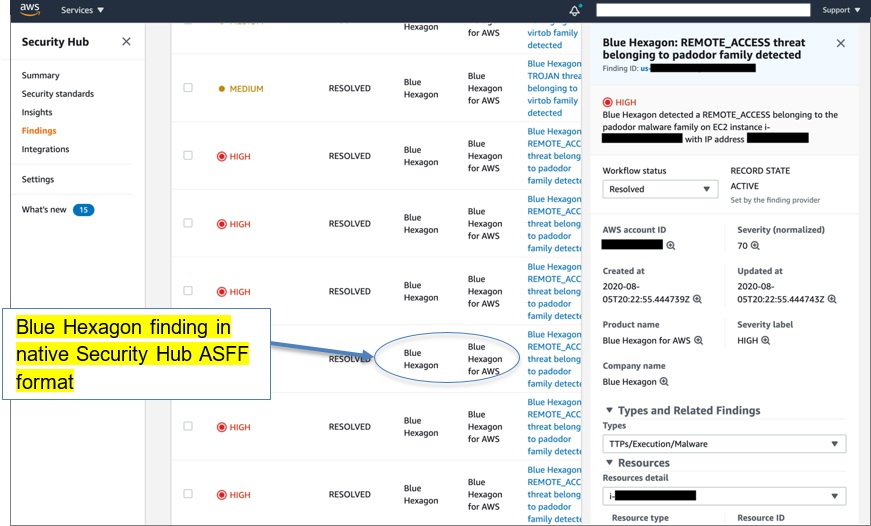 VPC traffic mirroring and VPC ingress routing are powerful AWS networking primitives to monitor network traffic in your VPC at the packet-level. With Blue Hexagon NG-NDR for AWS, powered by real-time deep learning, you can detect threats in network headers and payloads in less than a second.

With AWS Security Hub integration, you can trigger a rich action space of remediation and response. This provides an end-to-end self-driving security architecture that lowers the burden on your SecOps teams, while still providing high-fidelity alerts to reinforce your security posture.

You can deploy the reference architectures described in this post in minutes as AWS CloudFormation stacks. They provide fully automated detection and response capabilities against advanced threats targeting your VPC.

Blue Hexagon is an AWS Advanced Technology Partner with a real-time deep learning platform for network threat protection. With Blue Hexagon’s Network Detection and Response (NG-NDR) security tool for AWS, you can detect threats in network headers and payloads in less than a second.