Our customers loved the idea of automating the process to scan their approved AMIs in a consistent manner, and using Amazon Inspector to perform vulnerability assessments on their golden AMIs.

After several customer interactions, I realized that many of you prefer to use existing scanning tools provided by AWS Partner Network (APN) Partners such as Qualys to perform vulnerability assessments on golden AMIs. Qualys is an AWS Security Competency Partner.

The repository contains a README guide that includes step-by-step instructions and AWS CloudFormation templates required to set up a golden AMI pipeline that allows you to create, distribute across accounts, regularly assess, and decommission golden AMIs.

In Figure 1, you’ll see an architecture diagram that shows how multiple event sources can trigger an SSM automation document, which in turn kicks off the golden AMI creation process. At first, an Amazon EC2 instance is launched with the AMI-ID provided, and your updates, patches, and tags are applied to it. Second, a new Amazon EC2 instance is launched and a Qualys vulnerability assessment scan is performed on it.

The results of the Qualys scan will be emailed to your admin upon configuration in the Qualys portal. Finally, this automation sends an approval notification to your admin to approve or reject the AMI as a golden AMI, based on the Qualys assessment. 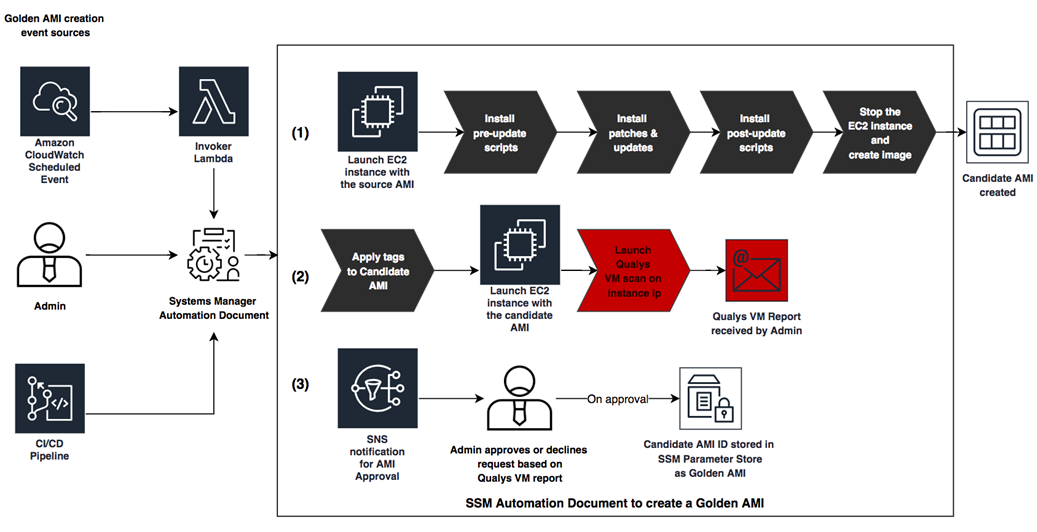 The GoldenAMIAutomationDoc performs the following steps:

The golden AMI creation process is triggered by an SSM Automation Document (RunContinuousInspection). The continuous vulnerability assessment is triggered by a CloudWatch scheduled event, which invokes an AWS Lambda function (SetupContinuousAssessmentLambdaFunction).

The SetupContinuousAssessmentLambdaFunction performs the following steps:

The RunContinuousInspection performs the following steps:

This repository contains sample AWS CloudFormation templates and a README guide. Instructions on how and where to execute these templates include:

For details on which operating systems are supported by the golden AMI pipeline, check the support section of the README guide.

The golden AMI pipeline is provided to address the challenges faced by customer cloud teams. It describes a method for providing a repeatable, scalable, and approved application stack factory that increases innovation velocity, reduces effort, and increases the chief information security officer’s (CISO) confidence that IT teams are compliant in their cloud deployments.

In this post, we’ve explored how to set up a golden AMI creation pipeline with a combination of AWS services, as well as the Qualys Scanner from AWS Marketplace. This will help you automate your AMI creation process in a standardized fashion, as well as perform continuous assessments on the portfolio of hardened AMIs existing in your AWS environment.

Additionally, this solution provides you with the ability to create a compliant AMI consumption process using AWS Config and distribute your hardened AMIs across multiple regions and accounts using AWS Lambda and AWS Service Catalog.