Editor’s note: This is the first post of a series by Mactores and AWS. Read Part 2 >>

With petabytes of data accumulated over 20 years, and more being generated each day, it was imperative for Seagate to have systems in place to ensure the cost of collecting, storing, and processing data did not exceed their return on investment (ROI).

That stack was too costly and time-consuming for the large amounts of data being processed (approximately 2 petabytes) and large number of users querying it.

In addition, end users were dissatisfied because the queries were taking too long to complete and sometimes failed. Systems maintenance and upgrades were compounding the problem.

In this post, we will describe the three migration options Mactores tested, the results each one produced, and the architecture of the solution Seagate selected.

This is a brief summary of the Amazon EMR technologies Mactores explored for its Seagate solution.

Mactores is an Amazon EMR Delivery Partner. The AWS Service Delivery Program endorses top APN Consulting Partners that have a deep understanding of specific AWS services, such as Amazon EMR.

Learn more about using Mactores to migrate to Amazon EMR.

When you combine it with the dynamic scalability of Amazon Elastic Compute Cloud (Amazon EC2) and scalable storage of Amazon Simple Storage Service (Amazon S3), you get the elasticity to run petabyte-scale analysis for a fraction of the cost of traditional on-premises clusters.

IDC studied nine companies that leveraged Amazon EMR to run big data frameworks at scale and found that, on average, they lowered total cost of ownership by 57 percent and experienced a 99 percent reduction in unplanned downtime. Learn more from IDC about the business impact of Amazon EMR, including an average 342 percent five-year ROI.

You can run Amazon EMR use cases on single-purpose, short-lived clusters that automatically scale to meet demand, or on long-running, highly-available clusters using the new multi master deployment mode.

Presto (or PrestoDB) is an open source, distributed, SQL query engine designed from the ground up for fast analytic queries against data of any size. It supports both non-relational sources, such as the Hadoop Distributed File System (HDFS), Amazon S3, and HBase, and relational data sources such as MySQL, PostgreSQL and Amazon Redshift.

Presto can query data where it’s stored, without needing to move data into a separate analytics system. Query execution runs in parallel over a pure memory-based architecture, with most results returning in seconds.

You can launch a Presto on Amazon EMR cluster in minutes. You don’t need to worry about node provisioning, cluster setup, configuration, or cluster tuning. Amazon EMR takes care of these tasks so you can focus on analysis.

You can quickly and easily create managed Presto clusters from the AWS Management Console, AWS Command Line Interface (CLI), or the Amazon EMR API. You can choose from a wide variety of Amazon EC2 instances, and use AWS Auto Scaling to dynamically add and remove capacity, or launch long-running or ephemeral clusters to match your workload. You can also add other Hadoop ecosystem applications onto your cluster.

Amazon Redshift is a fully managed, petabyte-scale data warehouse service that analyzes data using your existing business intelligence tools. It’s optimized for datasets ranging from a few hundred gigabytes to a petabyte or more, and is 50 percent less expensive than other cloud data warehouses.

To reduce the time and cost of the query execution, we recommended transforming Seagate’s current data platform to Amazon EMR.

This included the following three options:

Mactores performed a quick proof of concept (PoC) with Seagate data to benchmark all three options. Following are the results we obtained.

Migrating to Amazon EMR with Amazon S3 for storage allowed Seagate to keep its compute and storage resources separate, reducing their TCO significantly. Queries that used to execute in 7-8 hours on Seagate’s legacy platform now took less than 20 minutes.

Here are some details of the migration:

While Spark was fast enough to increase the query processing, it could not match the query execution time Seagate was expecting. Spark, on the other hand, could execute very large queries/jobs that required 10TB and above of memory.

Migrating to Amazon EMR offered separation of compute and storage, but Presto offered additional scalability with Amazon EMR. Presto was the fastest among all query engines we evaluated for Seagate queries.

For 70-75 percent of the queries, Presto outperformed Oracle Data Warehouse query execution performance while supporting massive amounts of data stored on Amazon S3. Seagate faced challenges with Presto, however, for queries consuming more than 10TB of memory. Besides that, there was no retry mechanism like Apache Spark in Presto to manage node restarts or loss of spot instances.

Amazon Redshift offered a fast query performance with consistency across multiple executions of the same query.

Part of the reason Amazon Redshift and Amazon Redshift Spectrum had higher TCO is because Presto on Amazon EMR supports spot instances, which directly affected the total cost of running the data platform.

The benchmarking we performed consisted of a workload that progressively increased incoming load for some time followed by an idle period. We ran five different queries, consisting of joins, group by, and sort. These queries were running on table sizes ranging between 10GB and 10TB, containing millions to billions of rows.

With the default configurations and comparable infrastructure, we observed that when running one query at a time Presto on Amazon EMR would finish the queries much faster than Apache Spark and Amazon Redshift.

For the load test, when five queries ran concurrently with a batch interval of 60 seconds, Presto still performed better than Apache Spark and Amazon Redshift.

Here are the same results of the load test in a different design format.

The chart in Figure 2 shows the output of some of the queries that were included in the testing of Apache Map Reduce vs. Apache Spark vs. Presto.

As observed, the execution time for Presto was significantly less than Apache Map Reduce and Apache Spark. 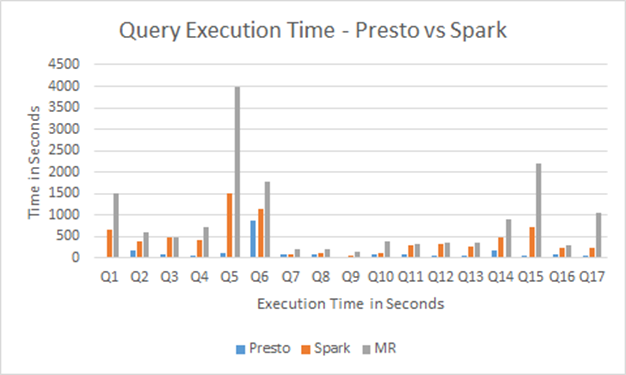 After working closely with our team to fully understand the potential solutions, Seagate chose to move forward with two query engines: Hive on Spark, and Presto on Amazon EMR.

To meet the query and scale performance requirements, Seagate would use Presto on Amazon EMR for queries less than 10TB of memory, and use Hive on Spark for larger queries with transient Amazon EMR clusters leveraging Amazon EC2 Spot Instances.

When a Presto cluster runs queries containing hundreds of billions of rows concurrently, it can hit an upper limit for some of the parameters. To avoid this problem, you have to understand how to configure these parameters in the config.properties and jvm.properties files:

These parameters configure the amount of memory consumed by Presto on AWS:

These parameters configure the behavior of queries:

To set up the new stack on AWS, we migrated the data to the storage location on Amazon S3. To set up Amazon EMR, we considered the networking configuration, security group policies, and authentication per Seagate security compliance needs.

We adjusted some Hadoop and Hive parameters to obtain optimum utilization of the Amazon EMR cluster and S3. The following architecture shows Seagate’s setup after migration. 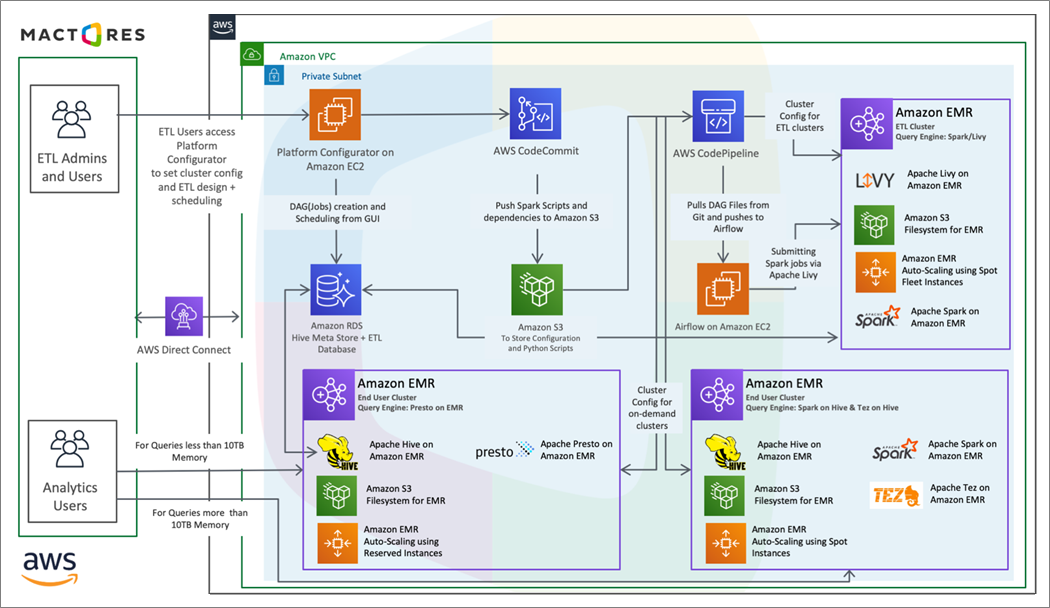 The migration to Amazon EMR Presto SQL allowed Seagate Technologies to continue processing petabytes of data fast, at a reduced cost of Amazon EMR, and resulted in a 10x improvement of the execution time of queries.

Since we deployed the solution with network load balancing, Seagate could switch clusters without impacting their end user. Seagate saved a lot of CPU time, and their end users could get query results in minutes rather than hours. This improved the overall efficiency of both their Amazon EMR cluster and business operations.

Learn more about using Mactores to migrate to Amazon EMR.

Read more about Amazon EMR in our other posts in this series:

Mactores is an Amazon EMR Delivery Partner. Their contributions to multiple open source communities in the big data space enables Mactores to deal with complex workloads and platform challenges, including Hadoop on Amazon EMR.