If you are interested in serverless architecture, you may have read many contradictory articles and wonder if serverless architectures are cost effective or expensive. I would like to clear the air around the issue of effectiveness through an analysis of a web scraping solution. The use case is fairly simple: at certain times during the day, I want to run a Python script and scrape a website. The execution of the script takes less than 15 minutes. This is an important consideration, which we will come back to later. The project can be considered as a standard extract, transform, load process without a user interface and can be packed into a self-containing function or a library.

Subsequently, we need an environment to execute the script. We have at least two options to consider: on-premises (such as on your local machine, a Raspberry Pi server at home, a virtual machine in a data center, and so on) or you can deploy it to the cloud. At first glance, the former option may feel more appealing — you have the infrastructure available free of charge, why not to use it? The main concern of an on-premises hosted solution is the reliability — can you assure its availability in case of a power outage or a hardware or network failure? Additionally, does your local infrastructure support continuous integration and continuous deployment (CI/CD) tools to eliminate any manual intervention? With these two constraints in mind, I will continue the analysis of the solutions in the cloud rather than on-premises.

Let’s start with the pricing of three cloud-based scenarios and go into details below. 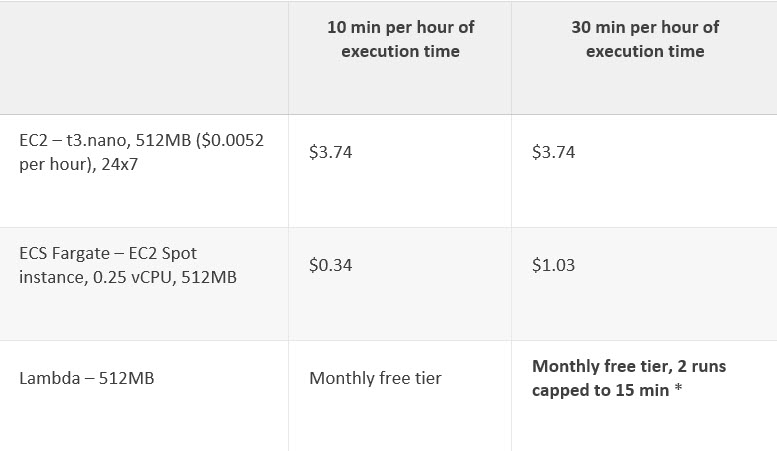 The first option, an instance of a virtual machine in AWS (called Amazon Elastic Cloud Compute or EC2), is the most primitive one. However, it definitely does not resemble any serverless architecture, so let’s consider it as a reference point or a baseline. This option is similar to an on-premises solution giving you full control of the instance, but you would need to manually spin an instance, install your environment, set up a scheduler to execute your script at a specific time, and keep it on for 24×7. And don’t forget the security (setting up a VPC, route tables, etc.). Additionally, you will need to monitor the health of the instance and maybe run manual updates.

The second option is to containerize the solution and deploy it on Amazon Elastic Container Service (ECS). The biggest advantage to this is platform independence. Having a Docker file (a text document that contains all the commands you could call on the command line to assemble an image) with a copy of your environment and the script enables you to reuse the solution locally—on the AWS platform, or somewhere else. A huge advantage to running it on AWS is that you can integrate with other services, such as AWS CodeCommit, AWS CodeBuild, AWS Batch, etc. You can also benefit from discounted compute resources such as Amazon EC2 Spot instances.

The architecture, seen in the diagram above, consists of Amazon CloudWatch, AWS Batch, and Amazon Elastic Container Registry (ECR). CloudWatch allows you to create a trigger (such as starting a job when a code update is committed to a code repository) or a scheduled event (such as executing a script every hour). We want the latter: executing a job based on a schedule. When triggered, AWS Batch will fetch a pre-built Docker image from Amazon ECR and execute it in a predefined environment. AWS Batch is a free-of-charge service and allows you to configure the environment and resources needed for a task execution. It relies on ECS, which manages resources at the execution time. You pay only for the compute resources consumed during the execution of a task.

You may wonder where the pre-built Docker image came from. It was pulled from Amazon ECR, and now you have two options to store your Docker image there:

The third option is based on AWS Lambda, which allows you to build a very lean infrastructure on demand, scales continuously, and has generous monthly free tier. The major constraint of Lambda is that the execution time is capped at 15 minutes. If you have a task running longer than 15 minutes, you need to split it into subtasks and run them in parallel, or you can fall back to Option #2.

By default, Lambda gives you access to standard libraries (such as the Python Standard Library). In addition, you can build your own package to support the execution of your function or use Lambda Layers to gain access to external libraries or even external Linux based programs.

You can access AWS Lambda via the web console to create a new function, update your Lambda code, or execute it. However, if you go beyond the “Hello World” functionality, you may realize that online development is not sustainable. For example, if you want to access external libraries from your function, you need to archive them locally, upload to Amazon Simple Storage Service (Amazon S3), and link it to your Lambda function.

One way to automate Lambda function development is to use AWS Cloud Development Kit (AWS CDK), which is an open source software development framework to model and provision your cloud application resources using familiar programming languages. Initially, the setup and learning might feel strenuous; however the benefits are worth of it. To give you an example, please take a look at this Python class on GitHub, which creates a Lambda function, a CloudWatch event, IAM policies, and Lambda layers.

In a summary, the AWS CDK allows you to have infrastructure as code, and all changes will be stored in a code repository. For a deployment, AWS CDK builds an AWS CloudFormation template, which is a standard way to model infrastructure on AWS. Additionally, AWS Serverless Application Model (SAM) allows you to test and debug your serverless code locally, meaning that you can indeed create a continuous integration.

See an example of a Lambda-based web scraper on GitHub.

In this blog post, we reviewed two serverless architectures for a web scraper on AWS cloud. Additionally, we have explored the ways to implement a CI/CD pipeline in order to avoid any future manual interventions.