NOTE: This blog post was written before the launch of Amazon MSK, a fully managed, highly available, and secure service for Apache Kafka. We recommend using Amazon MSK instead of running your own Apache Kafka cluster in EC2. If you need to run Apache Kafka on EC2 then you will find this blog is still useful.

This post was written in partnership with Intuit to share learnings, best practices, and recommendations for running an Apache Kafka cluster on AWS. Thanks to Vaishak Suresh and his colleagues at Intuit for their contribution and support.

Intuit, in their own words: Intuit, a leading enterprise customer for AWS, is a creator of business and financial management solutions. For more information on how Intuit partners with AWS, see our previous blog post, Real-time Stream Processing Using Apache Spark Streaming and Apache Kafka on AWS. Apache Kafka is an open-source, distributed streaming platform that enables you to build real-time streaming applications.

The best practices described in this post are based on our experience in running and operating large-scale Kafka clusters on AWS for more than two years. Our intent for this post is to help AWS customers who are currently running Kafka on AWS, and also customers who are considering migrating on-premises Kafka deployments to AWS.

Running your Kafka deployment on Amazon EC2 provides a high performance, scalable solution for ingesting streaming data. AWS offers many different instance types and storage option combinations for Kafka deployments. However, given the number of possible deployment topologies, it’s not always trivial to select the most appropriate strategy suitable for your use case.

In this blog post, we cover the following aspects of running Kafka clusters on AWS:

Note: While implementing Kafka clusters in a production environment, make sure also to consider factors like your number of messages, message size, monitoring, failure handling, and any operational issues.

In this section, we discuss various deployment options available for Kafka on AWS, along with pros and cons of each option. A successful deployment starts with thoughtful consideration of these options. Considering availability, consistency, and operational overhead of the deployment helps when choosing the right option.

One typical deployment pattern (all active) is in a single AWS Region with three Availability Zones (AZs). One Kafka cluster is deployed in each AZ along with Apache ZooKeeper and Kafka producer and consumer instances as shown in the illustration following. 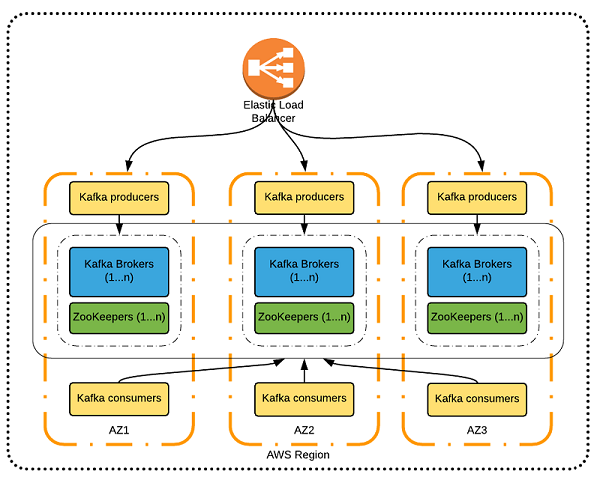 In this pattern, this is the Kafka cluster deployment:

Following are the pros and cons of this pattern.

A restart is required for patching and upgrading brokers in a Kafka cluster. In this approach, a rolling upgrade is done separately for each cluster.

Another typical deployment pattern (active-standby) is in a single AWS Region with a single Kafka cluster and Kafka brokers and Zookeepers distributed across three AZs. Another similar Kafka cluster acts as a standby as shown in the illustration following. You can use Kafka mirroring with MirrorMaker to replicate messages between any two clusters.

In this pattern, this is the Kafka cluster deployment:

Following are the pros and cons of this pattern.

There are two storage options for file storage in Amazon EC2:

Ephemeral storage is local to the Amazon EC2 instance. It can provide high IOPS based on the instance type. On the other hand, Amazon EBS volumes offer higher resiliency and you can configure IOPS based on your storage needs. EBS volumes also offer some distinct advantages in terms of recovery time. Your choice of storage is closely related to the type of workload supported by your Kafka cluster.

Kafka provides built-in fault tolerance by replicating data partitions across a configurable number of instances. If a broker fails, you can recover it by fetching all the data from other brokers in the cluster that host the other replicas. Depending on the size of the data transfer, it can affect recovery process and network traffic. These in turn eventually affect the cluster’s performance.

The following table contrasts the benefits of using an instance store versus using EBS for storage.

Intuit chose EBS because of their frequent instance restacking requirements and also other benefits provided by EBS.

The choice of instance types is generally driven by the type of storage required for your streaming applications on a Kafka cluster. If your application requires ephemeral storage, h1, i3, and d2 instances are your best option.

Intuit used r3.xlarge instances for their brokers and r3.large for ZooKeeper, with ST1 (throughput optimized HDD) EBS for their Kafka cluster.

If you need EBS storage, then AWS has a newer-generation r4 instance. The r4 instance is superior to R3 in many ways:

The network plays a very important role in a distributed system like Kafka. A fast and reliable network ensures that nodes can communicate with each other easily. The available network throughput controls the maximum amount of traffic that Kafka can handle. Network throughput, combined with disk storage, is often the governing factor for cluster sizing.

If you expect your cluster to receive high read/write traffic, select an instance type that offers 10-Gb/s performance.

In addition, choose an option that keeps interbroker network traffic on the private subnet, because this approach allows clients to connect to the brokers. Communication between brokers and clients uses the same network interface and port. For more details, see the documentation about IP addressing for EC2 instances.

If you are deploying in more than one AWS Region, you can connect the two VPCs in the two AWS Regions using cross-region VPC peering. However, be aware of the networking costs associated with cross-AZ deployments.

Kafka has a history of not being backward compatible, but its support of backward compatibility is getting better. During a Kafka upgrade, you should keep your producer and consumer clients on a version equal to or lower than the version you are upgrading from. After the upgrade is finished, you can start using a new protocol version and any new features it supports. There are three upgrade approaches available, discussed following.

In a rolling or in-place upgrade scenario, upgrade one Kafka broker at a time. Take into consideration the recommendations for doing rolling restarts to avoid downtime for end users.

If you can afford the downtime, you can take your entire cluster down, upgrade each Kafka broker, and then restart the cluster.

Intuit followed the blue/green deployment model for their workloads, as described following.

If you can afford to create a separate Kafka cluster and upgrade it, we highly recommend the blue/green upgrade scenario. In this scenario, we recommend that you keep your clusters up-to-date with the latest Kafka version. For additional details on Kafka version upgrades or more details, see the Kafka upgrade documentation. 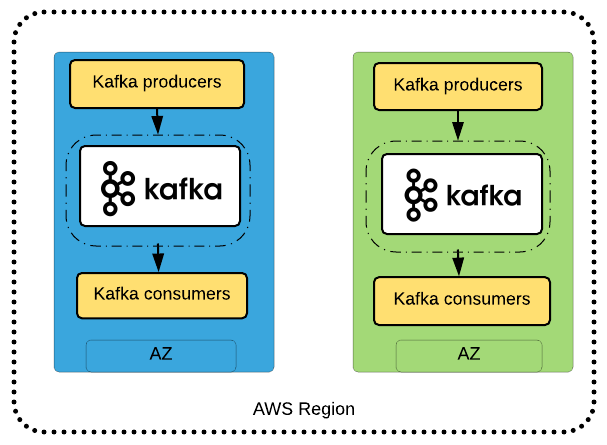 In this scenario, the upgrade plan works like this:

You can tune Kafka performance in multiple dimensions. Following are some best practices for performance tuning.

These are some general performance tuning techniques:

For Java and JVM tuning, try the following:

Knowing whether a Kafka cluster is working correctly in a production environment is critical. Sometimes, just knowing that the cluster is up is enough, but Kafka applications have many moving parts to monitor. In fact, it can easily become confusing to understand what’s important to watch and what you can set aside. Items to monitor range from simple metrics about the overall rate of traffic, to producers, consumers, brokers, controller, ZooKeeper, topics, partitions, messages, and so on.

For system metrics, we recommend that you monitor:

For producers, we recommend that you monitor:

For consumers, we recommend that you monitor:

Like most distributed systems, Kafka provides the mechanisms to transfer data with relatively high security across the components involved. Depending on your setup, security might involve different services such as encryption, Kerberos, Transport Layer Security (TLS) certificates, and advanced access control list (ACL) setup in brokers and ZooKeeper. The following tells you more about the Intuit approach. For details on Kafka security not covered in this section, see the Kafka documentation.

Authentication of connections to brokers from clients (producers and consumers) to other brokers and tools uses either Secure Sockets Layer (SSL) or Simple Authentication and Security Layer (SASL).

Kafka supports Kerberos authentication. If you already have a Kerberos server, you can add Kafka to your current configuration.

The type of storage used in your deployment dictates your backup and restore strategy.

The best way to back up a Kafka cluster based on instance storage is to set up a second cluster and replicate messages using MirrorMaker. Kafka’s mirroring feature makes it possible to maintain a replica of an existing Kafka cluster. Depending on your setup and requirements, your backup cluster might be in the same AWS Region as your main cluster or in a different one.

For EBS-based deployments, you can enable automatic snapshots of EBS volumes to back up volumes. You can easily create new EBS volumes from these snapshots to restore. We recommend storing backup files in Amazon S3.

For more information on how to back up in Kafka, see the Kafka documentation.

In this post, we discussed several patterns for running Kafka in the AWS Cloud. AWS also provides an alternative managed solution with Amazon Kinesis Data Streams, there are no servers to manage or scaling cliffs to worry about, you can scale the size of your streaming pipeline in seconds without downtime, data replication across availability zones is automatic, you benefit from security out of the box, Kinesis Data Streams is tightly integrated with a wide variety of AWS services like Lambda, Redshift, Elasticsearch and it supports open source frameworks like Storm, Spark, Flink, and more. You may refer to kafka-kinesis connector.

Prasad Alle is a Senior Big Data Consultant with AWS Professional Services. He spends his time leading and building scalable, reliable Big data, Machine learning, Artificial Intelligence and IoT solutions for AWS Enterprise and Strategic customers. His interests extend to various technologies such as Advanced Edge Computing, Machine learning at Edge. In his spare time, he enjoys spending time with his family.