AWS Batch is one of the service integrations that are available for Step Functions. AWS Batch enables users to more easily and efficiently run hundreds of thousands of batch computing jobs on AWS. AWS Batch dynamically provisions the optimal quantity and compute resource classifications based on the volume and specific resource requirements of the batch jobs submitted. AWS Batch plans, schedules, and runs batch computing workloads across the full range of AWS compute services and features, such as AWS Fargate, Amazon EC2, and spot instances.

This blog walks through Step Functions integration in AWS Batch console and shows how AWS Batch users can efficiently use Step Functions workflow orchestrators in batch workloads. A sample application also highlights the use of AWS Lambda as a compute option for AWS Batch.

In addition to using compute-intensive tasks, users sometimes need Lambda for simpler, less intense processing. Users also want to combine the two in a single business process that is scalable and repeatable.

Workflow orchestration in AWS Batch console provides common batch-related patterns that are present in Step Functions. Handling errors while submitting batch jobs in Step Functions is one of them.

Getting started with orchestration in Batch

This option allows creating a state machine from scratch, reviewing the workflow definition, deploying an AWS CloudFormation stack, and running the workflow in Step Functions console. 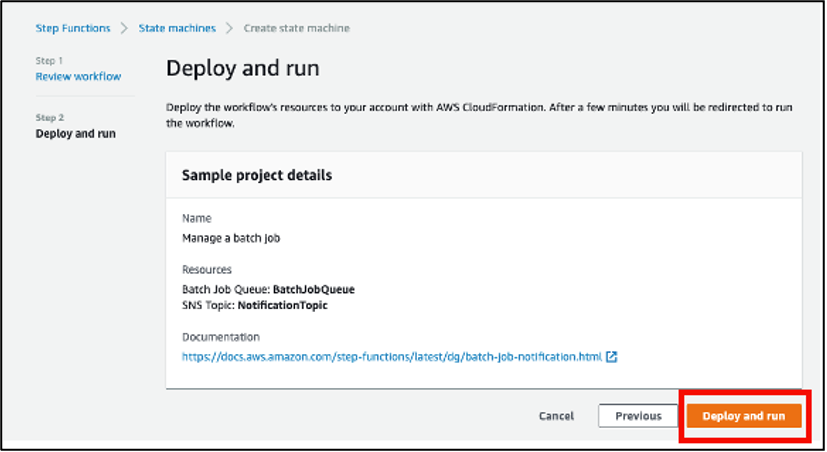 Deploy and run from console

Once deployed, the state machine is visible in the Step Functions console as:

Viewing the state machine in the AWS Step Functions console

Select the BatchJobNotificationStateMachine to land on the details page: 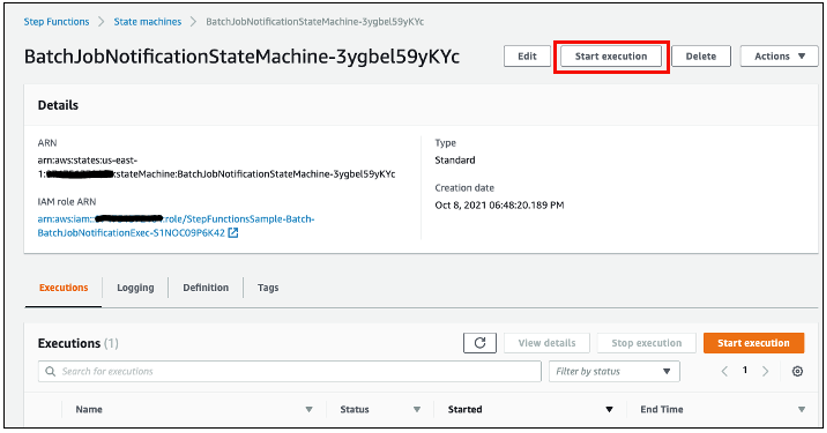 The CloudFormation template has already provisioned the required batch job in AWS Batch and the SNS topic for success and failure notification. 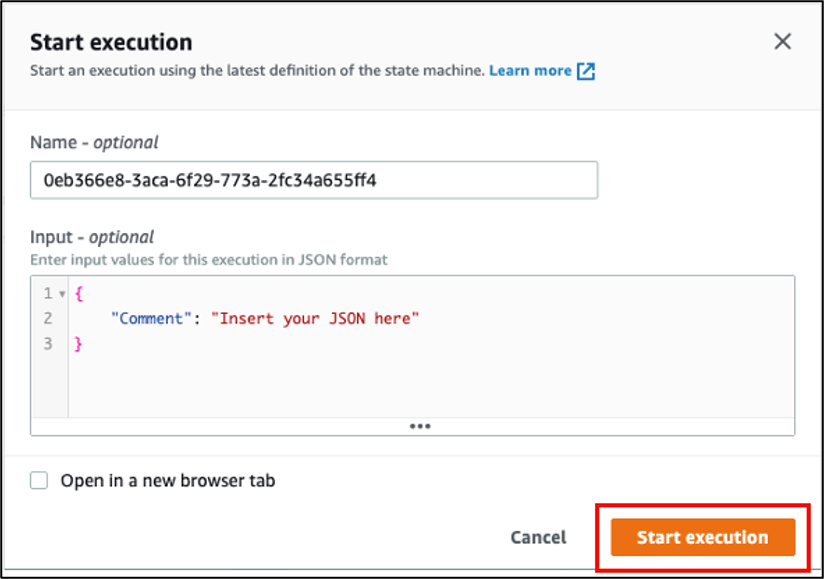 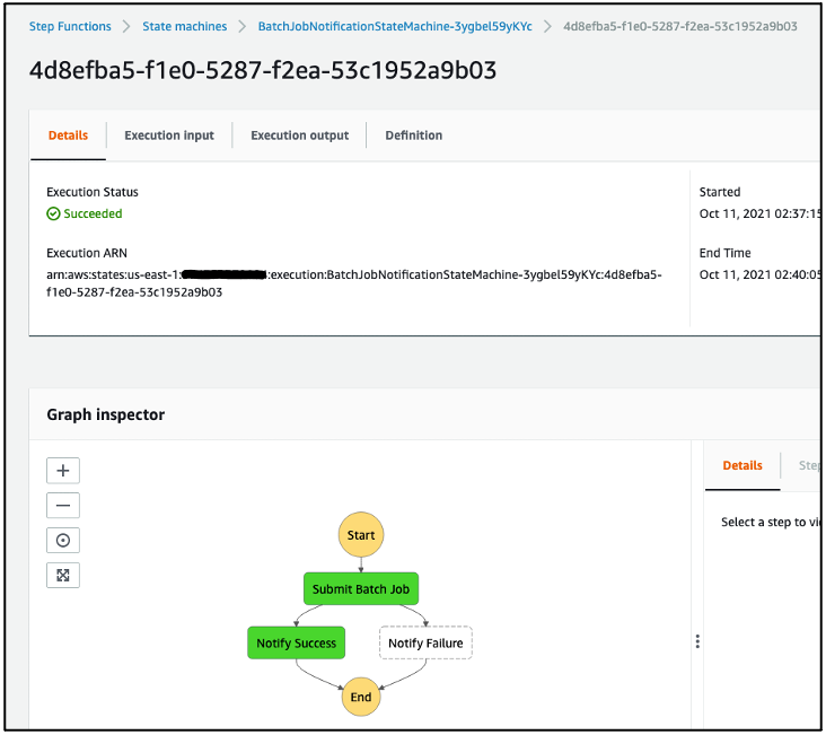 The successful results in the console

The state machine is listed in the Batch console

Another pattern to use in Step Functions is the combination of Lambda and batch job.

Select Get Started from Combine Batch and Lambda pop-up followed by Start from a template and Continue. This takes the user to Step Functions Workflow studio with the following pattern. The Lambda task generates input for the subsequent batch job task. Submit Batch Job task takes the input and submits the batch job:

Fan out to multiple Batch jobs

With dynamic parallelism, a user can submit multiple batch jobs based on a collection of batch job input data. With visibility to each iteration’s input and output, users can easily navigate and troubleshoot in case of failure. 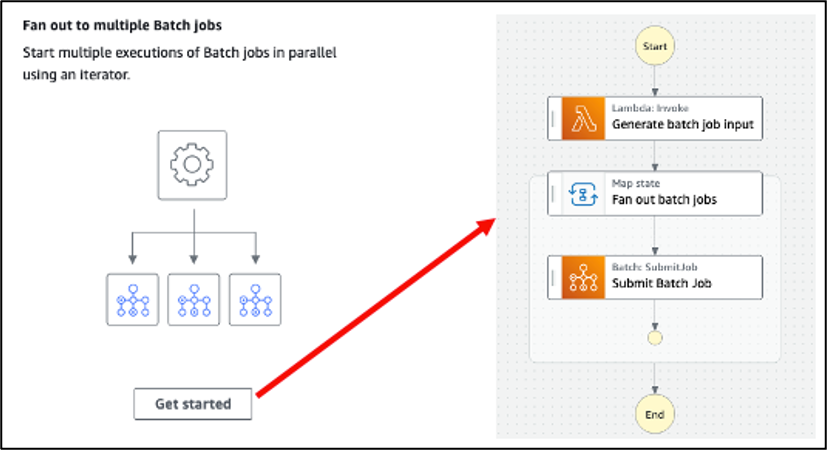 Easily navigate and troubleshoot in case of failure

Create a state machine from the Step Functions console 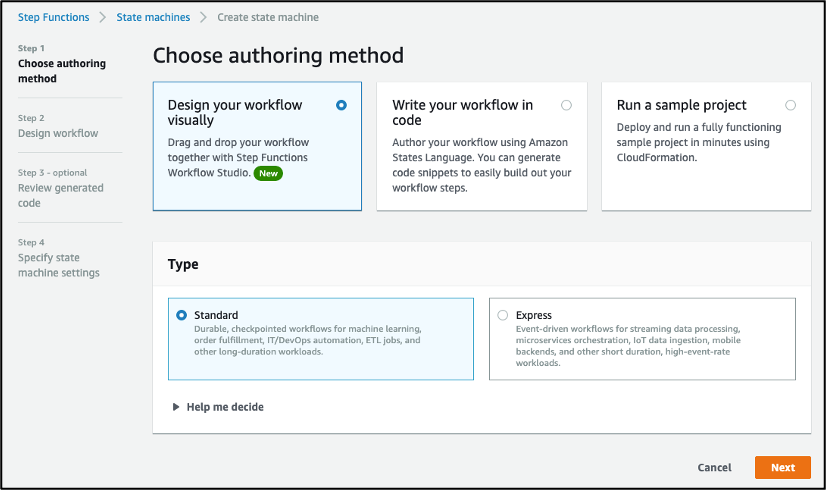 The sample application shows fan out to multiple batch jobs pattern. Before deploying the application, you need:

To run the application using the AWS CLI, replace the state machine ARN from the output of deployment steps:

Step Functions can automate the lifecycle of an AWS Batch job, starting from creating a compute environment, creating job queues, registering job definitions, submitting a job, and finally cleaning up.

Step Functions support for 200 AWS Services equates integration with more than 9,000 API actions across these services. AWS Batch tasks in Step Functions can evolve by integrating with available services in the workflow for their pre- and post-processing needs.

For example, batch job input data sanitization can be done inside Lambda and that gets pushed to an Amazon SQS queue or Amazon S3 as an object for auditability purposes.

There are multiple ways to decorate around an AWS Batch job task. Refer to AWS SDK service integrations and optimized integrations for Step Functions for additional details.

The sample application provisions AWS Batch (the job definition, job queue, and ECS compute environment inside a VPC). It also creates subnets, route tables, and an internet gateway. Clean up the stack after testing the application to avoid the ongoing cost of running these services.

To delete the sample application stack, use the latest version of AWS SAM CLI and run:

To get started, open the workflow orchestration page in the Batch console. Select Orchestrate Batch jobs with Step Functions Workflows to deploy a sample project, if you are new to Step Functions.

This feature is available in all Regions where both Step Functions and AWS Batch are available. View the AWS Regions table for details.