Data transfer costs can play a significant role in determining the overall design of a system. The Amazon Elastic Container Registry (Amazon ECR), Amazon Elastic Container Service (Amazon ECS), and Amazon Elastic Kubernetes Service (Amazon EKS) can all incur data transfer charges depending on a variety of factors. It can be difficult to visualize what that means relative to an Amazon ECS or Amazon EKS deployment. This blog illustrates common deployment patterns for AWS container services and explains the resulting data transfer charges that may be incurred. Service charges are out of scope for this blog, but should be carefully considered when designing any architecture.

An Amazon ECR private registry hosts container images in a highly available and scalable architecture. There are two types of registries in Amazon ECR—private and public—and each one has different data transfer charges.

You can use an ECR private registry to manage private image repositories consisting of Docker and Open Container Initiative (OCI) images and artifacts. 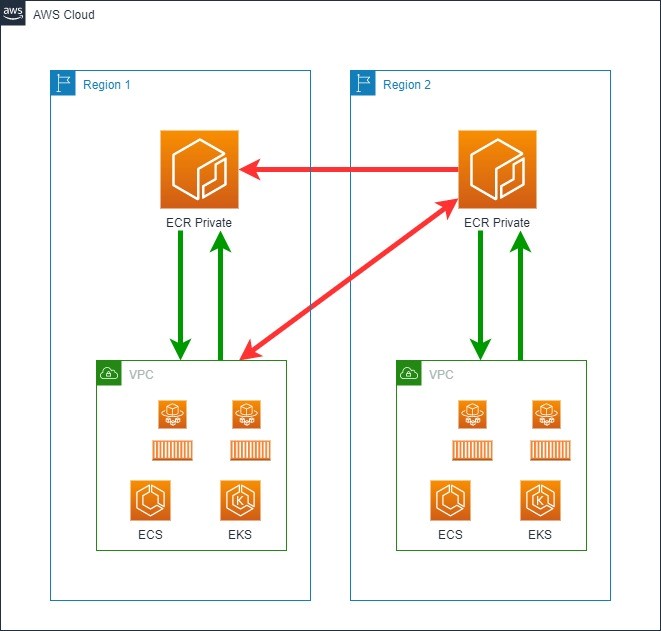 Amazon ECR offers built-in functionality to replicate container images to different locations. This could be useful for disaster recovery purposes, a promote-to-production pipeline, or to help reduce the image pull time and data transfer costs when running containers in different Regions. This data transfer is charged at the cross-Region data transfer charge rates described on the Amazon EC2 pricing page 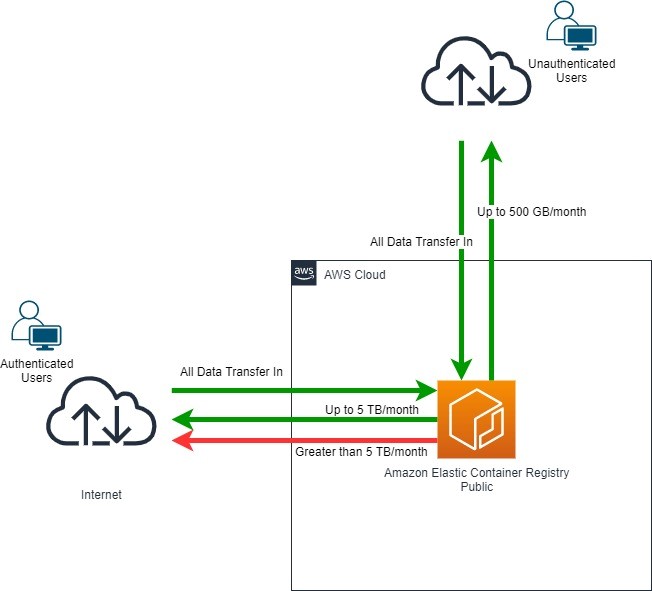 All data transfer into Amazon ECR Public incurs no charge from Amazon ECR. Data transfer out is subject to charges when more than 5 TB/month is transferred out to non-AWS destinations, and you have authenticated to Amazon ECR with an AWS account. Up to 500 GB/month can be transferred out to non-AWS destinations to clients that have not authenticated (that is, anonymously). After that limit is reached, no further anonymous data transfer is allowed.

Compute capacity for container instances in Amazon ECS can be deployed within VPCs that allow access to the Amazon ECS service endpoint using the internet. For example, the compute capacity for container instances can be deployed in public subnets (with an internet gateway), private subnets (with a NAT gateway, shown in Figure 3), or can route to the internet through another VPC using the AWS Transit Gateway. Both Amazon EC2 and AWS Fargate can be used as compute for this type of deployment, and there is no difference in data transfer costs based on which is chosen. 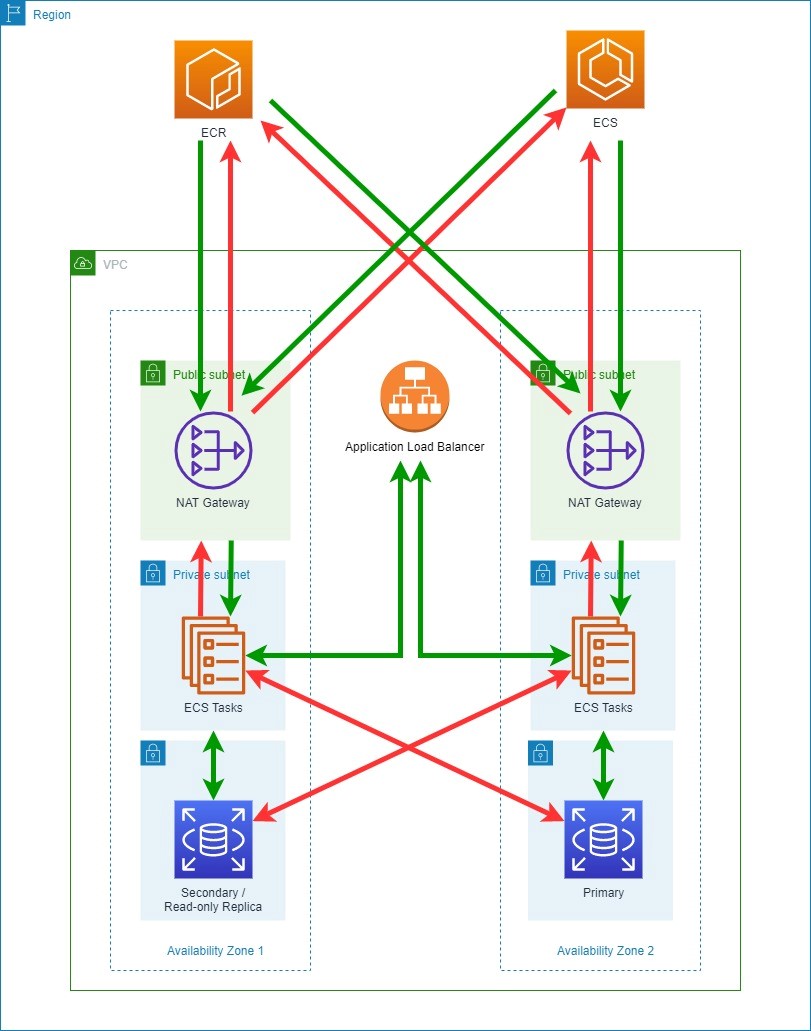 The following data transfer is not charged in the sample deployment:

In this deployment, data transfer charges accrue for:

Another common pattern to deploy Amazon ECS workloads is to restrict all external network access (Figure 4). Because container instances in Amazon ECS clusters need external network access to communicate with the Amazon ECS service endpoint, AWS PrivateLink must be used to communicate with the service endpoints. Again, both Amazon EC2 and AWS Fargate can be used for the compute capacity in this type of deployment. However, there is a difference in data transfer costs based on which is chosen. 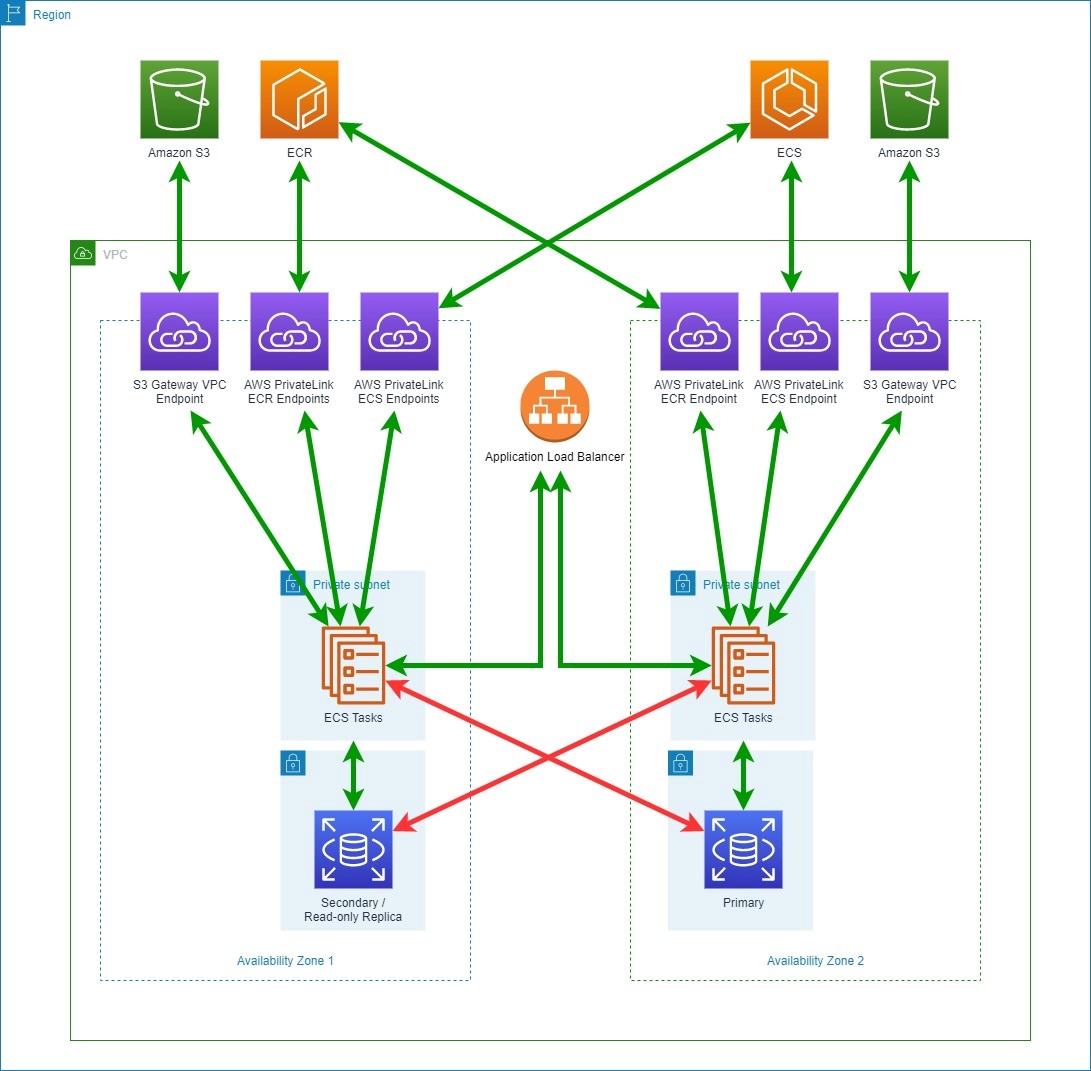 The following data transfer is not charged in the sample deployment:

In this deployment, data transfer charges accrue for cross-AZ traffic to the database.

Although there is no data transfer fee, AWS PrivateLink imposes both a per-hour service charge and a per-GB data processing charge for data processed through each VPC endpoint, billed per Availability Zone. More details can be found on the AWS PrivateLink pricing page.

Amazon Elastic Container Service Anywhere is a feature of Amazon ECS that enables you to easily run and manage container-based applications on-premises, including on your own virtual machines (VMs) and bare metal servers. With Amazon ECS Anywhere, you do not need to install or operate local container orchestration software, thus reducing operational overhead. ECS Anywhere offers a completely managed solution that enables you to standardize container management across all of your environments.

Figure 5. ECS Anywhere over the internet

Data transfer fees are accrued based on how the customer-managed infrastructure connects to the Amazon ECS Anywhere control plane: 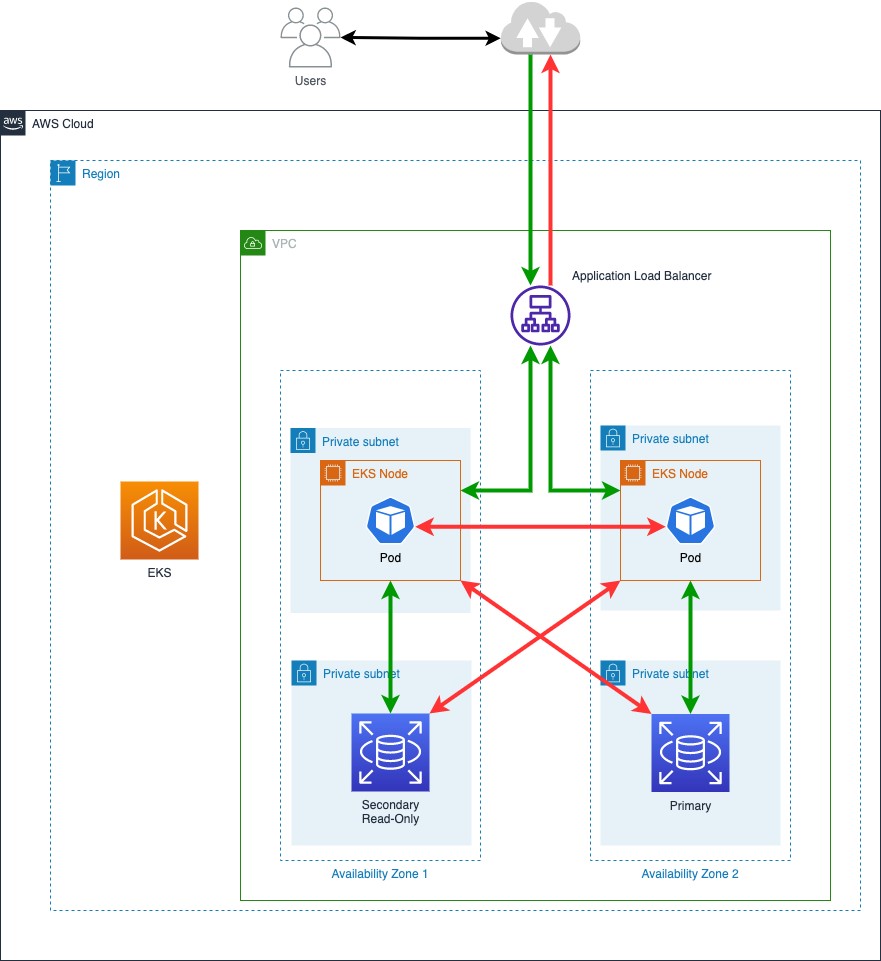 The following data transfer is not charged in this example:

The following data transfer charges accrue for this example:

There are several other configuration options and deployment strategies to consider in an Amazon EKS deployment relative to data transfer costs: cluster access (public/private), pod-to-pod communication, and communication between the pods and the load balancer.

Public EKS clusters (Figure 8) have the public endpoint access enabled and the private endpoint disabled. Communication between the control plane and worker nodes will exit the VPC based on the VPC’s routing. For worker nodes in private subnets, communication will traverse a NAT gateway and exit via an internet gateway. There is no data transfer charge associated with this. However, there is a per-GB NAT gateway data processing fee. In addition, worker nodes not in the same Availability Zone as the NAT gateway will incur a per-GB data transfer charge for cross-Availability Zone traffic. For worker nodes in public subnets, communication will exit the internet gateway and will not be charged. 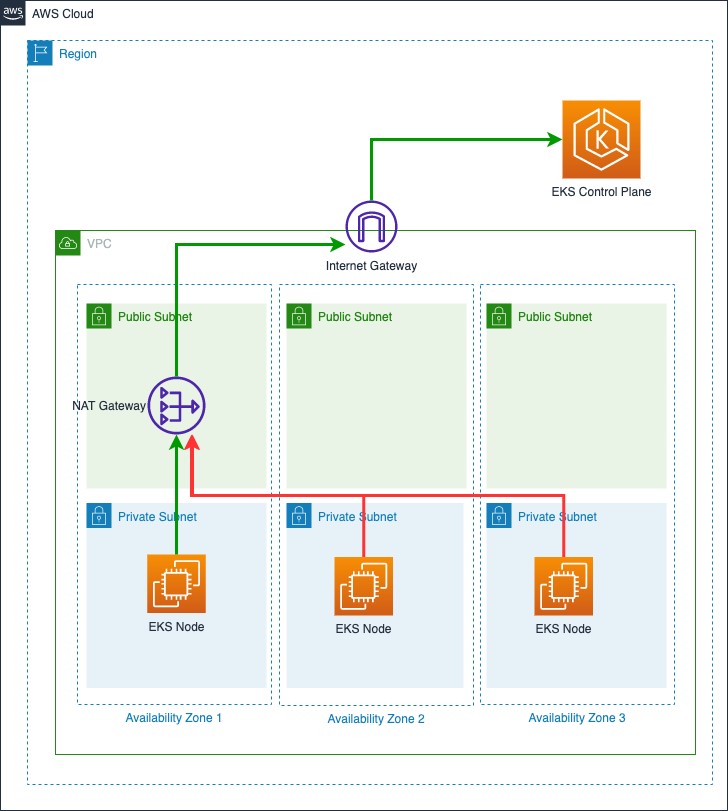 In a cluster with private Amazon EKS endpoints (Figure 9), worker nodes will communicate with private endpoints. The Kubernetes API Server Endpoint URL will resolve to elastic network interfaces (ENIs) within the (customer) VPC. Worker nodes inside the VPC will communicate with these ENIs. In this deployment model, there is a chance that a worker node communicates with an ENI in a different Availability Zone. This communication would be subject to a cross-Availability Zone data transfer charge.

Amazon EKS workloads often include a load balancer to distribute the traffic evenly across pods. Pods are deployed alongside Kubernetes Service and Ingress objects. The add-on AWS Load Balancer Controller monitors these objects and automatically provisions the AWS load balancer resource. The path traffic takes (and resulting data transfer charges) depend on how the Service and Ingress objects are configured. There are two common methods of configuration.

The first method involves having a target group consisting of all worker nodes within the cluster (Figure 11). This grouping includes Service:LoadBalancer, Service:NodePort, and Ingress TargetType: Instance. Here, an ephemeral port (NodePort) is opened on each node in the cluster, and traffic is distributed evenly across all nodes. If the destination pod is on the node, no additional data transfer occurs. If the destination pod was scheduled on a different node, data transfer charges may accrue if the target pod is in a different Availability Zone. 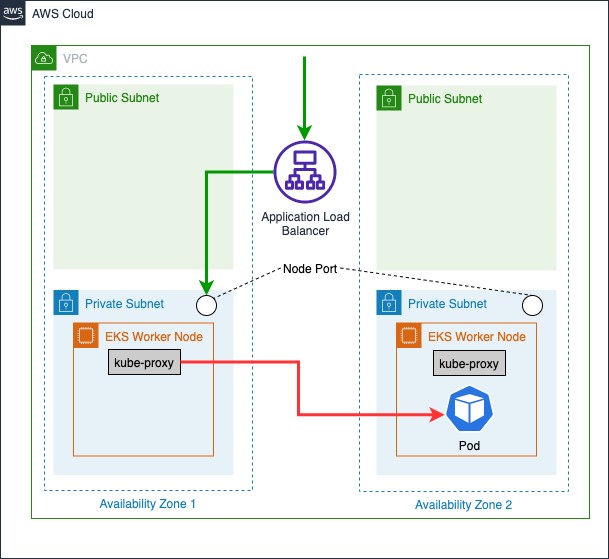 The second method involves a target group consisting of the pod IP addresses (Figure 12). In this method, the load balancer targets are the IP address of the pods. Communication bypasses the kube-proxy and targets the pod directly, keeping traffic in the same Availability Zone and avoiding data transfer charges. 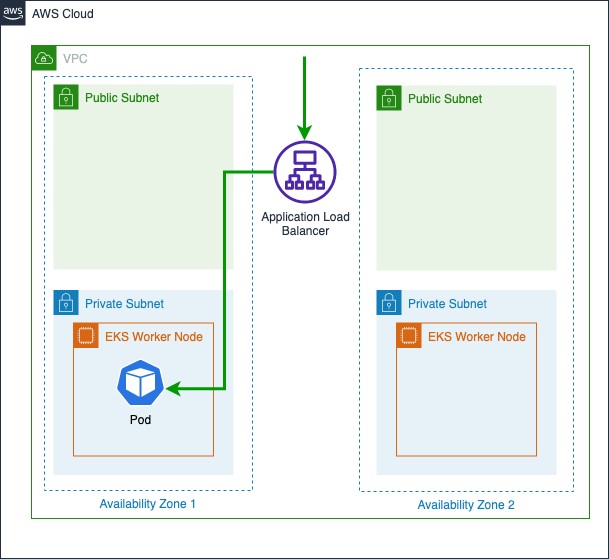 Below are some tips to avoid excess data transfer charges and data processing charges in your container workloads:

Interested in learning more? Check out the blog post Overview of Data Transfer Costs for Common Architectures for an explanation of data transfer charges for common network architectures, and be sure to visit the AWS Containers Blog for more great container-related content!