This blog post gives an overview of sample use cases related to smart metering integration and AWS services that can be used to integrate utility systems with smart metering (also known as advanced metering infrastructure or AMI) implementations.

The primary audience for this blog post is power distribution utilities that are implementing legacy smart metering solutions (AMI 1.0) and evaluating running on AWS as an option, or those that have implemented on AWS already and are in the process of expanding integration points with other utility systems. This post also covers an architecture that can be used for the upcoming AMI 2.0 generation of smart metering systems, which leverage AWS serverless and IoT services.

Utilities’ metering-related applications to be integrated

To successfully deploy and manage smart metering, utilities must implement a core smart metering “ecosystem,” which includes the meters themselves, the meter data collection network, and the head-end system (HES). They must also integrate with several existing utility applications:

In order to identify the AWS services required for smart metering integrations with utility applications, consider the following use cases. There can certainly be more use cases, but these will suffice to provide insights into the most common and applicable integration methods. 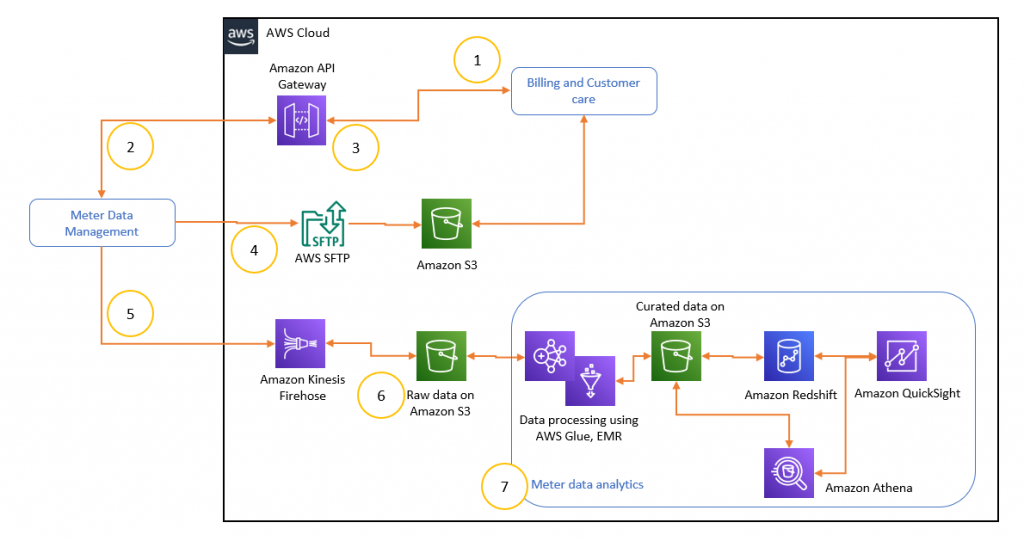 Figure 1: Primary meter data integration uses cases. A hybrid on-premises / AWS scenario is shown, but all systems can be AWS based

Meter data to data lake: When analyzed, meter data, which includes different types of reads such as kilowatt (KW), kilovolt-ampere reactive (KVAR), and voltage as well as multiple parameters and events/alarms, can help utilities build both customer and grid operational insights. This meter data, with different types of reads captured at different frequencies, when accumulated over months and years, runs into petabytes of data. To efficiently analyze this data, utilities can send the data to a data lake, which then gives the agility to run advanced analytics including ML use cases on it.  For more on this, refer to our blog on Meter Data Analytics (MDA) and the MDA Reference Architecture and Quick Start to help quickly build and deploy MDA solutions.

Figure 2: Additional meter data integration uses case examples. A hybrid on-premises/AWS scenario is shown, but all systems can be AWS based.

The integration methods mentioned with the use cases are examples, and the exact methods can be finalized during the design phase. Since there can be more than one HES, and the billing and customer care system involved, it is important that the integration effort is minimized by using the integration layer approach instead of point-to-point integration. This will also reduce operational and maintenance overhead, especially if the integration layer employs services that are fully managed by AWS. During implementation, it is also important to define a common data format (with mandatory and optional parameters) that can be supported by multiple source and destination systems. Some of the best practices that should be considered while defining the integration architecture are:

Loosely coupled services: Loose coupling helps isolate the behavior of a component from other components that depend on it, increasing resiliency and agility. Integration services such as queuing systems, streaming systems, workflows, and load balancers are loosely coupled and can be implemented based on requirement. While some architectures need all of these integration services, some might need one or two of these services. Implementation can be limited only to those two services, thus reducing the overall efforts and time for implementation.

The AWS Well-Architected Framework covers best practices of cloud-based implementation and provides a consistent approach for customers and AWS Partners to evaluate architectures and implement designs that can scale over time.

Advanced metering infrastructure (AMI) or smart metering has evolved over the past two decades with advancement in technology at edge devices, in the cloud, and in the communications and enterprise layers. The next generation of smart metering systems, dubbed AMI 2.0, will take advantage of these advancements. When rolling out new smart metering, important architectural decision considerations are (1) the solution should be resilient and automatically scale to multiple millions of endpoints, (2) the solution should minimize the overhead to maintain and operate metering solutions, (3) the solution should allow for the ability to manage and run multiple metering- and energy-related applications at the edge (in-meter or behind the meter devices). This will reduce the operational overheads of managing the infrastructure required to run smart metering solutions, improve metering reliability, and enable value-added metering services at the edge. This can be achieved by using AWS serverless and IoT services. For instance, serverless services on AWS scale up and down automatically and need no infrastructure provisioning by customers, while AWS IoT services can significantly ease the management of the metering fleet with capabilities such as automated health, security patching, and over-the-air software distribution.

The following diagram gives an overview of AWS services that can support AMI 2.0 applications and the application integration. This can further be enhanced to address additional use cases based on customer-specific requirements. 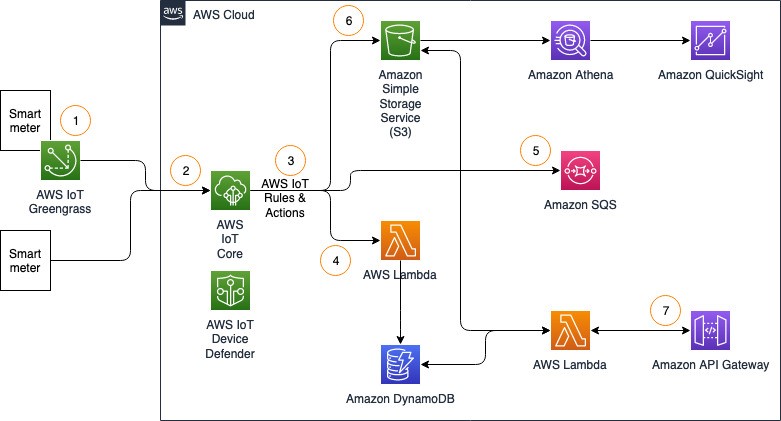 In the context of AMI 2.0, power distribution utilities can benefit by reducing the time to develop, enhance, and implement smart metering solutions using services such as AWS IoT, Amazon S3, Amazon Athena, and Amazon QuickSight. The prebuilt integrations available in AWS IoT services, at both the edge layer and also the upstream layer, significantly reduce the time required for development and testing.

The AWS IoT rule actions, which specify what to do when a rule is invoked, include prebuilt integrations with other AWS services such as Amazon DynamoDB, AWS Lambda, and Amazon SQS as well as others including Amazon Kinesis Data Firehose, an extract, transform, and load service; Amazon Simple Notification Service (Amazon SNS), a fully managed messaging service; and AWS IoT Analytics, a fully managed service that makes it easy to run and operationalize sophisticated analytics on massive volumes of IoT data. These services can be configured based on the use case. Additionally, AWS services bring in agility to implement new use cases such as load forecasting or advanced ML on top of the smart metering dataset. On the edge side, AWS IoT Greengrass can be considered by device manufacturers (smart meter or concentrator manufacturers) as well since AWS IoT Greengrass makes it easy to perform ML inference locally on devices using models that are created, trained, and optimized in the cloud.