The popularity of live music festivals and concerts has swelled in recent years, with the UK leading the charts for a country with the most music festivals. The artistry, visual spectacle, and energy of the crowd remain a draw, but with COVID-19, the live concert industry came to a halt, with large gatherings no longer safe.  The music industry had already started livestreaming performances prior to the pandemic, so once it was safe to return to small, socially-distanced productions, livestreamed music concerts and festivals became the new standard. Since then, several live performances from around the world have streamed via digital platforms, whether a solo acoustic living room performance on YouTube or an elaborate socially distanced band production streamed by a dedicated ticketing agency. With these developments, UK-based live recording, production, music mixing, and broadcast outfit Spiritland Productions has experienced a surge in demand for its services.

Looking to add new value for its growing roster of clients, the Spiritland Productions team began investigating how it might harness immersive audio to improve the overall live stream concert experience for music fans. Having considered Dolby Atmos for some time and demoed the technology at the International Broadcasting Convention (IBC), the company opted to integrate Dolby audio solutions into its live streams. “As soon as we started playing around with the demo, we were sold,” shared Antony Shaw, Director, Spiritland Productions. “We were surprised by just how enjoyable the mixing experience can be in Dolby Atmos, not to mention all the tools and flexibility that it also gives you to shape spaces. We’ve come a long way since then and continue to develop new techniques to capture audio in the space we’re working in but keep everything aligned to avoid timing issues. Doing this makes the stereo fold down a lot easier.”

To complement its new Dolby workflow, Spiritland Productions opted to bolster its audio and video encoding strategy with a portable setup using the AWS Elemental Link devices at the venue, streaming into the AWS Cloud with the AWS Elemental MediaLive and AWS Elemental MediaPackage video processing services providing the final encoding and packaging for onward delivery. Having little AWS experience, the team, supported by AWS, experimented to bring the two streams together in a unified setup integrating into a selected player that supports a stereo feed of each live production for the audience as well as a Dolby Atmos version. “Setting up the AWS Elemental Links and getting up and running with AWS Elemental MediaLive and AWS Elemental MediaPackage was so straightforward; it’s so much simpler than using traditional on-premises encoders,” shared Rich Andrews, Senior Sound Supervisor, Spiritland Productions. “And we love how AWS Elemental Link ties directly into the MediaLive AWS Management Console, so everything you need is just right there at your fingertips, and you can get your stream out to a host of platforms and devices in seconds.” 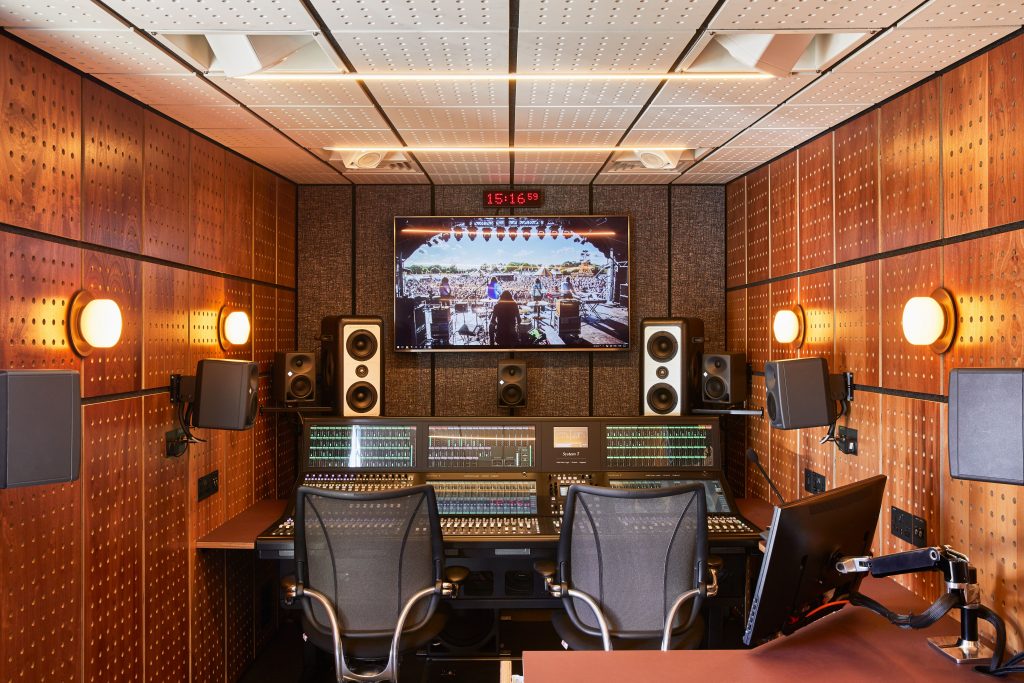 Spiritland Productions first put its AWS and Dolby-enabled workflow to the test for a live performance by Hot Chip, which was streamed via ticketing agency website DICE. Audiences bought tickets to the virtual experience weeks in advance, and on the day of the concert, received a link through which they could access an HTML5 player to watch and cast the live stream. The production setup for this project was extensive, with Andy Wood, Producer, present to oversee the production and Larry Gale, Director, on-site to direct and vision mix the broadcast grade cameras provided by Vivid Broadcast.

Audio from the stage was fed into SSL SB32.24 stage boxes through Cisco switches and multiplexed onto CWDN fiber. At the truck this was then unmultiplexed into DANTE, and mixed by Shaw on an SSL System T console to create the Dolby Atmos mix. The stereo fold down was embedded with pictures from the gallery which was then fed through an SDI router to two AWS Elemental Link devices onpremises and from there into AWS Elemental MediaLive, where it was transcoded to meet various quality levels, ranging from 1080p to 240p.

“We had no previous experience with AWS prior to this production, yet it went off without a hitch, and that’s a testament to AWS and Dolby, and their development teams,” shared Shaw. “AWS Elemental Link combined with AWS Elemental MediaLive is incredibly user-friendly and easy to get up and running. Adding AWS Elemental MediaPackage, combined with Amazon CloudFront content delivery means we can easily scale globally. It’s provided us with a solid foundation to build on, so that we can continue innovating for clients, especially as 5G becomes more of a reality.”

In the coming months, as Spiritland Productions continues to deploy this workflow for future productions, it’s aiming to deliver a cinema-grade streaming experience for viewers. Shaw concluded, “At the end of the day, for us, it’s all about bringing music fans a more immersive experience and driving it to become the standard across live concert and festival streams. With scalable, reliable technology from AWS and Dolby, we’re able to speed up the process and the possibilities will only grow as 5G technology proliferates.”