Specifically, customers can start transforming their applications and moving towards microservices architecture by utilizing the VMware Cloud on AWS and its unique capabilities for integrating with AWS services.

In this post, I will discuss architectural considerations and best practices for integrating VMware Cloud on AWS with Amazon Elastic Kubernetes Service (Amazon EKS), in order for customers to manage container workloads and deploy microservices-based applications.

I will also cover use cases for leveraging AWS DevOps tools and other cloud-native services to accelerate a microservices-oriented Software Development Life Cycle (SDLC) process and further optimize applications deployment.

Kubernetes is an open-source container orchestration platform for automating microservices deployment and management. Amazon EKS is a managed service for customers to run Kubernetes clusters on AWS without the complexity to install and operate their own Kubernetes control plane or nodes.

Amazon EKS is a scalable and reliable cloud service and is 100 percent compliant to upstream Kubernetes, as certified by the Cloud Native Computing Foundation (CNCF). 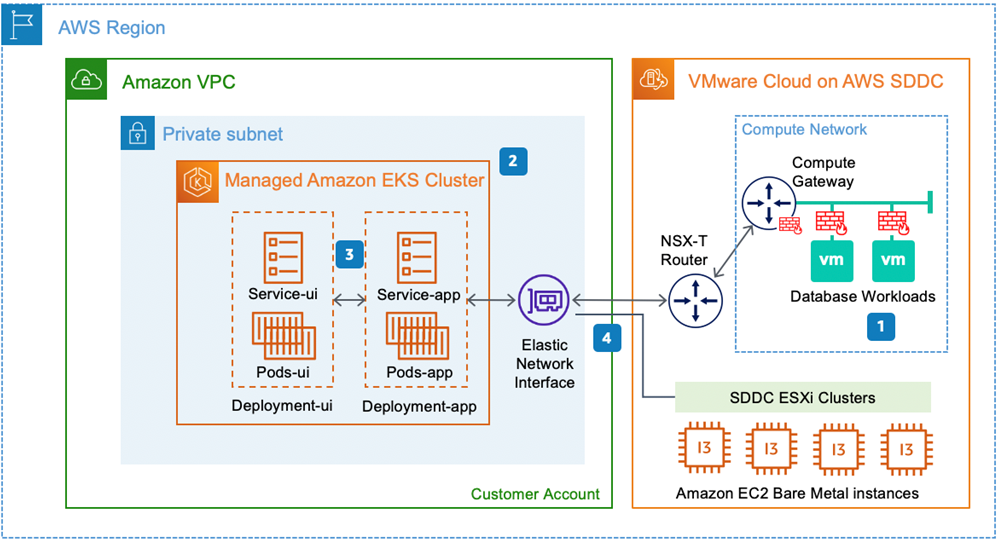 After a lift-and-shift migration of existing database virtual machines (VMs) into VMware Cloud on AWS, customers have the options to replicate the production database workloads to dev/test environments by leveraging the vSphere clone feature.

Next, customers can easily connect their microservices deployed on Amazon EKS clusters (within the connected VPC) to the database workloads running on SDDC via the high-bandwidth and low-latency ENI. Specifically, you can leverage the standard Kubernetes environment variables to pass on the VMware database workload properties (such as IP addresses) to the Kubernetes Pods running on the EKS clusters (see Figure 2).

Furthermore, the NSX firewall capabilities built into the Compute Gateway can also be utilized to secure and limit access to the database VMs.

For enterprises running on existing Java and .NET applications, you can utilize the AWS App2Container (A2C) command-line tool to rapidly transform and containerize legacy systems to modern applications with minimum disruptions.

The A2C tool automatically discovers the current applications and identifies their dependencies, and then packages the application artifacts and dependencies into container images. In addition, the A2C tool will also generate relevant artifacts for seamless deployment to EKS clusters, which significantly simplifies the container workloads deployment process and increases operational efficiency.

Once customers have transformed their applications into containers, they’ll need mechanisms to publish microservices-based applications externally for end-user testing or deploying to production. Amazon EKS provides a few different options to securely and efficiently expose microservices to the external network.

First, EKS supports the standard Kubernetes service type LoadBalancer that is a logical abstraction used to expose an microservice running on a set of Pods, which are the basic deployable objects containing one or more containers. Customers can use the Network Load Balancer (instance or IP targets) or the Classic Load Balancer (instance target only) to expose a TCP/UDP-based microservice and redirect incoming traffic to the backend Pods.

When an Ingress Controller is deployed in conjunction with Network Load Balancer, you have the flexibility to enable host-based or path-based routing, which significantly reduces the consumption of additional Network Load Balancers and Elastic IPs (EIPs) and increases operational efficiency.

Last but not least, customers could leverage Amazon Route 53 to route incoming DNS requests and distribute traffic to the Network Load Balancer or Application Load Balancer hosting the microservices. Amazon Route 53 offers advanced DNS load balancing features such as latency-based or geolocation-based routing, or failover to a secondary region with its built-in health check capabilities.

To further accelerate the application modernization journey and help customers improve their SDLC best practices, you can leverage AWS DevOps tools to set up a CI/CD pipeline for each individual microservice. These fully managed DevOps tools and their native integration capabilities with Amazon EKS enable customers to easily try out new ideas and quickly roll back if something doesn’t work as planned.

Since the legacy applications are broken into microservices, applications become more resilient to failure by only degrading certain functionality and not crashing the entire application. The risks of total failure of an entire application during a microservice testing or upgrading process are significantly reduced. This makes it easier to update code and results in fast and frequent software development tests and releases. 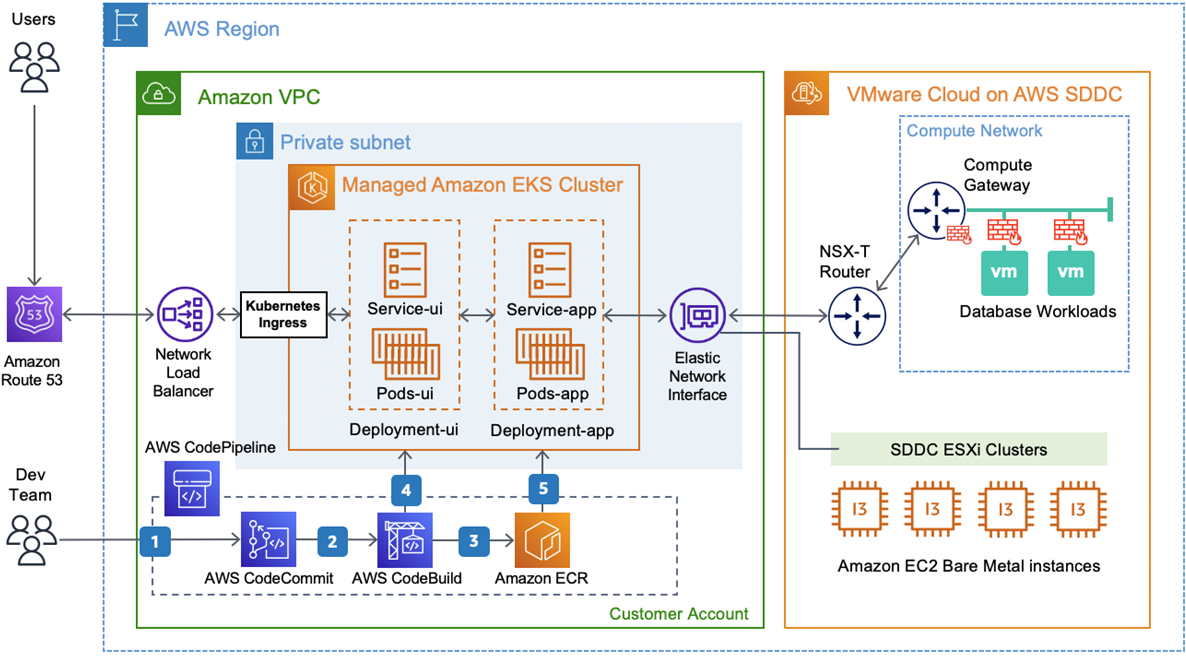 For more details, please refer to the full reference architecture.

The diagram below represents an overall architecture on how to leverage additional AWS native services to further optimize microservices-based application deployments. 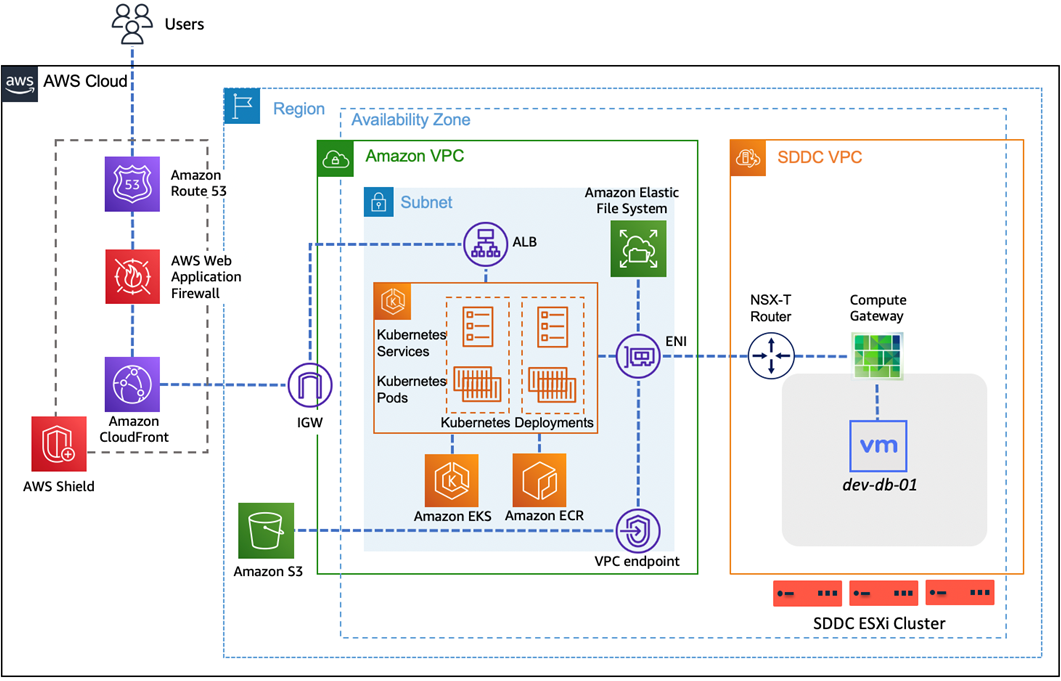 In this post, I have explained how customers can easily integrate VMware Cloud on AWS with Amazon EKS to accelerate their application transformation and modernization. Amazon EKS provides a simplified and fully managed Kubernetes platform to effortlessly manage container workloads and deploy microservices-based applications, along with multiple flexible options to publish microservices externally.

I have discussed use cases of utilizing various AWS DevOps tools to build CI/CD pipelines for the microservices, in order to improve and expedite the SDLC process. This enables customers to quickly try out new ideas and frequently roll out new services and features, delivering fast innovations to their business.

VMware Cloud on AWS provides native access to a large portfolio of AWS services that can help customers accelerate their application modernization journey.

By utilizing the native AWS services, customers can rapidly transform their applications and build containerized microservices architectures without the management overhead and operational complexity.

To learn more, we recommend you review these additional resources: