With an increased pace of innovation and demand for faster development and testing cycles, customers with mainframes want to adopt DevOps practices for their z/OS environments.

To facilitate these practices, IBM offers the IBM Z Development and Test (ZD&T), a hardware emulation solution that allows regular z/OS software to run on the x86 platform by emulating the IBM Z instruction set, IO, and other devices.

Aside from increasing development and test agility, IBM ZD&T can also be used for training or onboarding in a safe and isolated environment, as well as test system-wide changes without impacting production.

In this post, we will cover the steps necessary to create your own IBM ZD&T and z/OS environment on Amazon Web Services (AWS).

IBM ZD&T and its Use Cases

Having mainframe development and test environments on an emulator on the cloud can increase the pace of innovation by enabling organizations to experiment with the ease of creating new z/OS environments very quickly.

IBM ZD&T allows you to deploy and start or stop z/OS environments on-demand with an optimized cost of entry. Using IBM ZD&T, organizations can create Continuous Integration and Continuous Delivery (CI/CD) pipelines for their mainframe development, and take advantage of DevOps best practices.

With the great demand for mainframe skills, it’s getting harder to replace that enterprise intelligence with new graduates. A solution to this problem is educating your own employees on mainframe concepts and technologies to fulfill available positions.

With IBM ZD&T, it’s possible to start multiple z/OS environments available separated from the production environment, avoiding unnecessary risks. It can also be used for customer employees’ onboarding by facilitating the learning of customer z/OS practices in a standalone safe environment.

Since you can clone data and applications from your production environment and restore them on an IBM ZD&T emulator, another benefit of having an emulated environment is to create production-like sandbox test environments.

Such a test environment is useful to prototype system-wide changes, such as a z/OS migration to a newer version, or to experiment with new PARMLIB values or network configurations, reducing risk and accelerating the process.

In this post, we focus on the IBM ZD&T Enterprise Edition version, which is best suited for deployment on AWS. It is composed of three different components:

A file server is also configured in this server to host the ADCD image volumes, used to create ADCD images and transfer them to a target emulator when deploying. The ADCD is a z/OS distribution composed of packages each containing z/OS DASD volume images.

This server hosts the target environment for running the emulator itself. It is where the ADCD image is deployed. When accessing the emulated z/OS, this is the server you have to connect to.

These instances can communicate freely within a common network subnet and a common AWS security group. An Amazon Simple Storage Service (Amazon S3) bucket contains the IBM ZD&T installation files as well as the ADCD volumes. ADCD volumes are images of z/OS volumes.

Setting Up the Infrastructure

In order to use the provided script, you’ll need to upload the IBM ZD&T installer and ADCD volumes into an S3 bucket using the following directory structure:

A quick way to upload the files in this structure is to organize the directory structure on your local machine, and then upload it using the following command:

After all of the files have been uploaded and validated, you can create a stack using the provided CloudFormation template, being careful with the descriptions of the parameters.

This template will provision all three instances, create a virtual private cloud (VPC), a subnet, and all of the required components of the solution, including an AWS Identity and Access Management (IAM) Role for the Enterprise Server EC2 instance to access and copy the files from the S3 bucket.

After the stack creation is complete, some processes will still be running in the instances, such as packages updates, installation of the IBM ZD&T binaries, copy of the files from the S3 bucket, and others.

You can follow along the installation of dependencies, IBM ZD&T packages and volumes being copied by issuing the following command:

When the initial bash script ends, you’ll see the following messages in the logs of each server:

# License Server
echo "License Server installation finished, a script scheduled on cron will be checking if the license update files is uploaded to the S3 bucket."

Once they all finish, the License Server will have uploaded a file to the S3 bucket with a file name in the following format:

You then have to send this file to your IBM representative, so they can generate an update file with the following format:

If need be, you can find the complete manual installation instructions in the IBM ZD&T documentation.

Next, we continue the deployment of the target emulator assuming you used the CloudFormation template for installation.

Once you receive the update file, upload it to the S3 bucket with the same name format. The License Server will be polling for it in five-minute intervals.

You can check the polling progress and last poll timestamp by issuing the following command on the License Server:

You can also check the polling progress and last poll timestamp using the same command above, but in the Enterprise Server.

Once the Enterprise Server finds license_applied in the S3 bucket, it will fire a deploy of the ADCD image it created into the Emulator Server, which may take several minutes.

Tip: If you are connected to a VPN or on an office network, it may block port 9443. Try accessing it from outside the VPN or a different network. 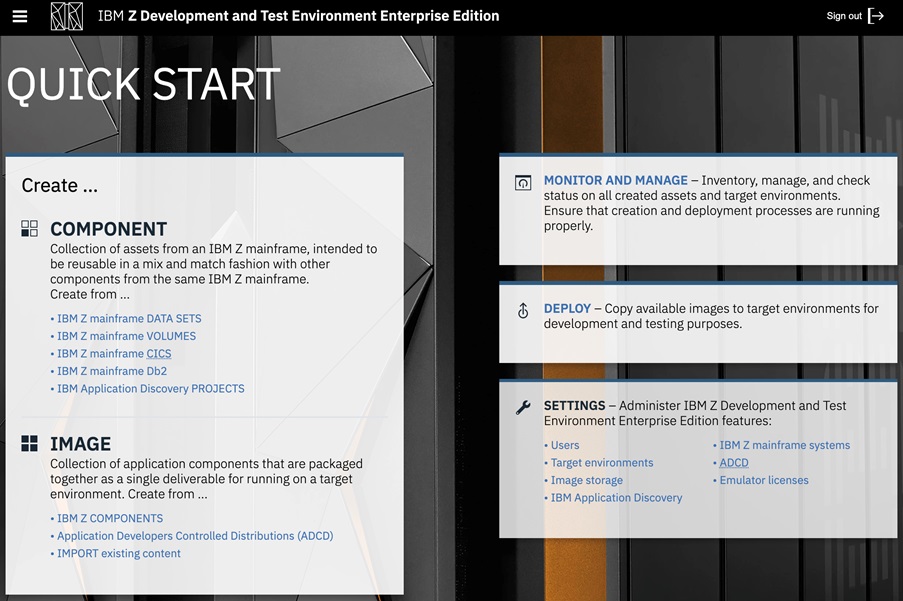 Once authenticated in the Admin Console, click on MONITOR AND MANAGE, and then in TARGET ENVIRONMENTS you’ll be able to expand and check the deployment progress. 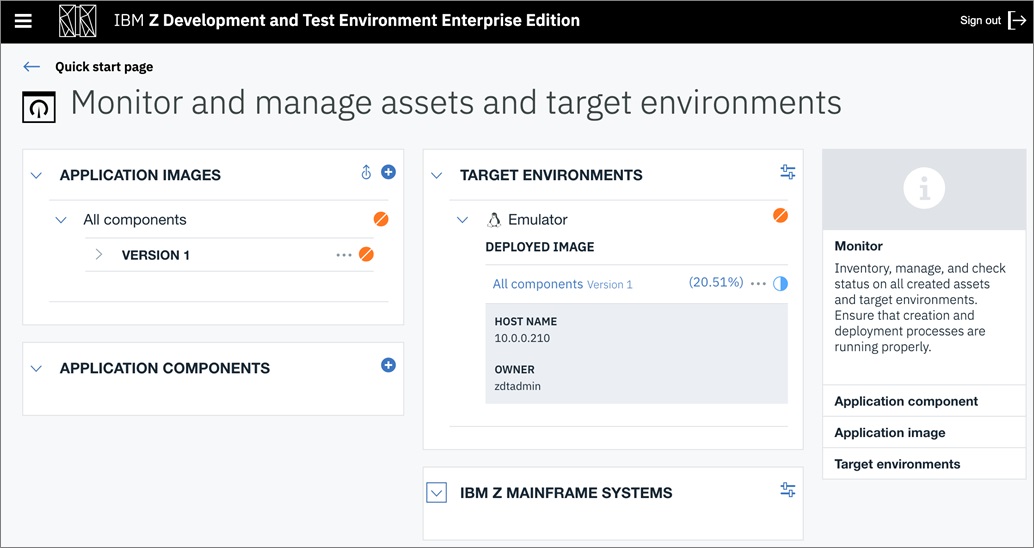 Under the TARGET ENVIRONMENTS section in Figure 3, when the progress reaches 100 percent the image has been successfully deployed on the target emulator.

In order to access z/OS itself, you should use the Emulator Server public IP address, which is available in the “Outputs” section of the CloudFormation stack, as well as in the EC2 console itself.

The TN3270 service is running on z/OS and listening on ports 23 and 2023, with the latter using a TLS connection and being the one you should use. 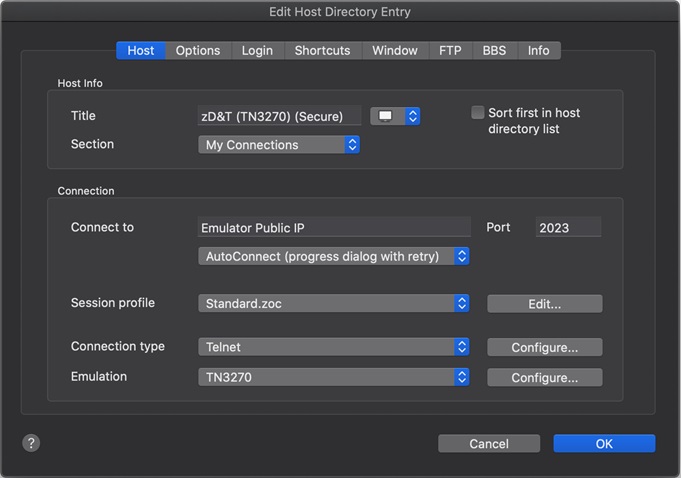 In order to access z/OS, we use a TN3270 terminal emulator and configure the connection as shown on Figure 4. 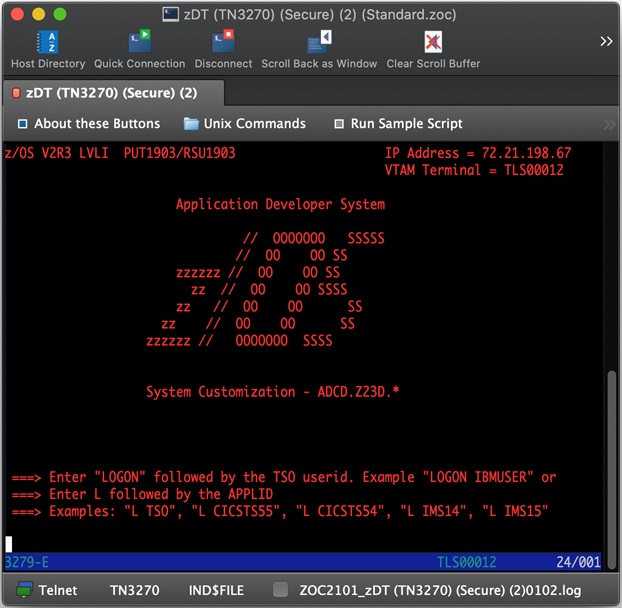 Once the TN3270 terminal emulator is configured, we start the connection and see the z/OS welcome screen as shown in Figure 5.

Since the ADCD z/OS also runs a SSHD service, you can access z/OS using the same IP as above and port 2022, since port 22 is being used to access the underlying Linux OS running the emulator.

Credentials can be found in the ADCD documentation received together with the volumes.

With the IBM ZD&T emulator running z/OS with CICS, DB2, IMS, WebSphere Application Server, and other products, you can set up your own CI/CD pipeline, start training employees, and experimenting.

If you’re interested in deploying IBM ZD&T on AWS and don’t have a license, installer and ADCD volumes, contact your IBM representative who will assist you.

If you would like to have more information related to the use of IBM ZD&T, check out this IBM Redbook.

If you need more details on the IBM ZD&T installation steps, feel free to read through IBM’s documentation.

Or, if you would like to understand how the ADCD image that is delivered together with the IBM ZD&T license is organized, check IBM’s documentation.