The goal of this post is to demonstrate how to use AWS Developer Tools to build a continuous delivery pipeline that automatically deploys a test environment and runs a UI test against it. We also explain how to build a container image which includes Chromium browser, Firefox browser, Selenium, and its dependencies, which are used run the tests in AWS Lambda and AWS Fargate. You can accelerate the testing by launching multiple test cases in parallel using the Map state in Step Functions.

The following diagram illustrates the architecture of our solution. We have a pipeline defined in AWS CodePipeline, with AWS CodeCommit as source stage which contains all the source code in a repository, changes to the source will automatically trigger the pipeline. Followed by build stage using AWS CodeBuild to build the container image based on Dockerfile and push that image to Amazon ECR repository. Once the image has been uploaded, in Test stage it deploys the Test Website & Status Website on AWS Amplify using AWS CloudFormation.  As a next action, the tests will be triggered through Step Functions, which are executed on AWS Lambda or AWS Fargate. After completion of test stage, it will send an email for approval with the link to the status website. When the approver accepts the results, the website will be deployed in production.

I built a website for UI testing and a status website to display the test results, these websites will be hosted in AWS Amplify as part of the solution. 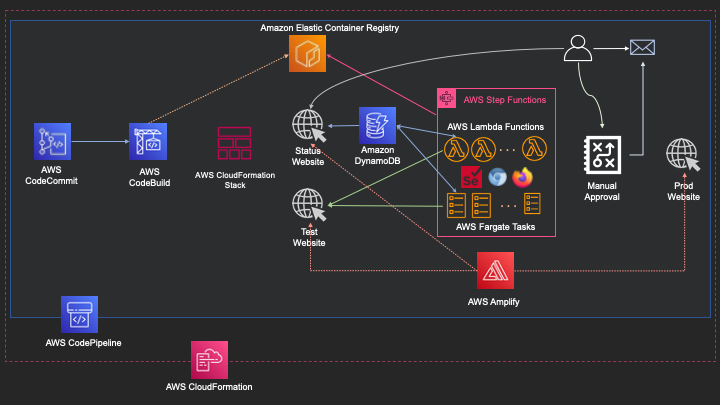 We walk through the following sections:

Chromium and Firefox browsers depend on certain libraries that they expect to be available and accessible in the underlying operating system. It’s much easier to use container image support by Lambda to include all the dependent packages as part of the container. Chromium provides a flag to disable shared memory (/dev/shm) so it’s possible to run them on Lambda. Firefox depends on the fallocate system call and /dev/shm. For this post, we use Fargate to run the tests on Firefox.

The resources referred to in this post, including the AWS CloudFormation template, test and status websites, AWS CodeBuild build specification files, Dockerfile, and the Python script that performs the test, are available in the serverless-ui-testing-using-selenium GitHub repository.

To deploy this example solution, you should have AWS Identity and Access Management (IAM) access to use the following services:

You also need a Git client to clone and push the content to the repository.

Details about Dockerfile for container image

As shown in the following Dockerfile, we perform multi-stage builds to build the container image that is used in both Lambda and Fargate. The process has three stages:

We create a continuous delivery pipeline to automate the testing and deployment to production based on the changes to the source repo. We create the pipeline through AWS CloudFormation with the pipeline.yaml template. This stack creates the pipeline, its dependent resources, and DynamoDB tables needed to store the details of the modules and test results.

The following screenshot illustrates our pipeline.

The pipeline includes the following stages:

When the pipeline reaches the approval stage, it sends an email (see the following screenshot) to review the status of the test result and another link to the pipeline directly to approve or reject the review. 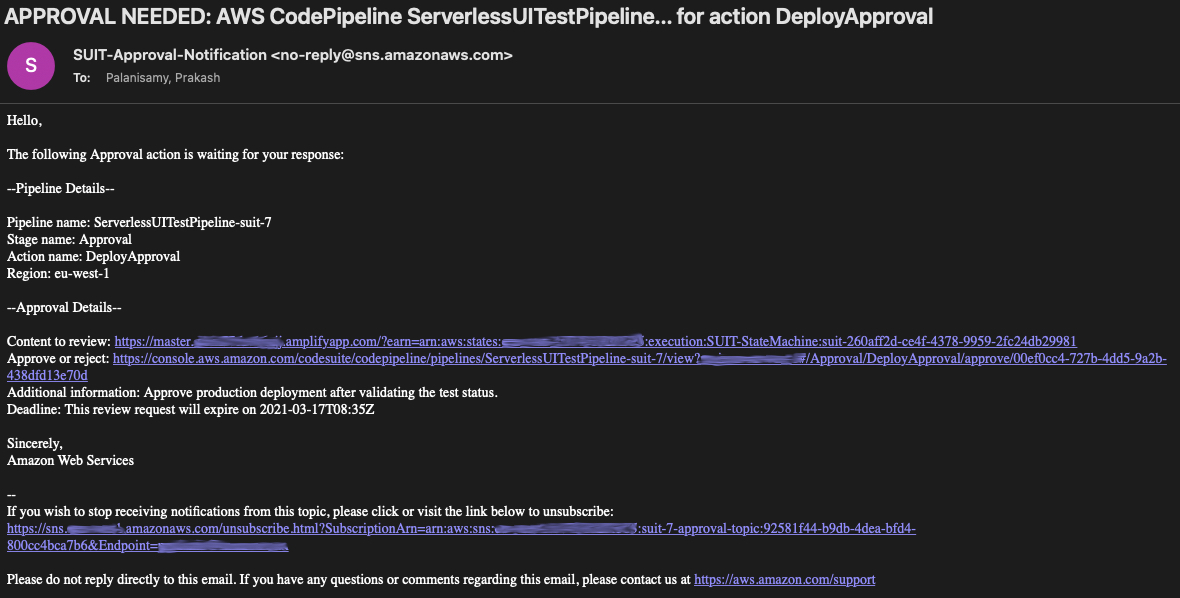 When you choose the link Content to review, you’re presented with the status page (see the following screenshot) with details including the list of test cases, run status, browser versions, time taken, and more. 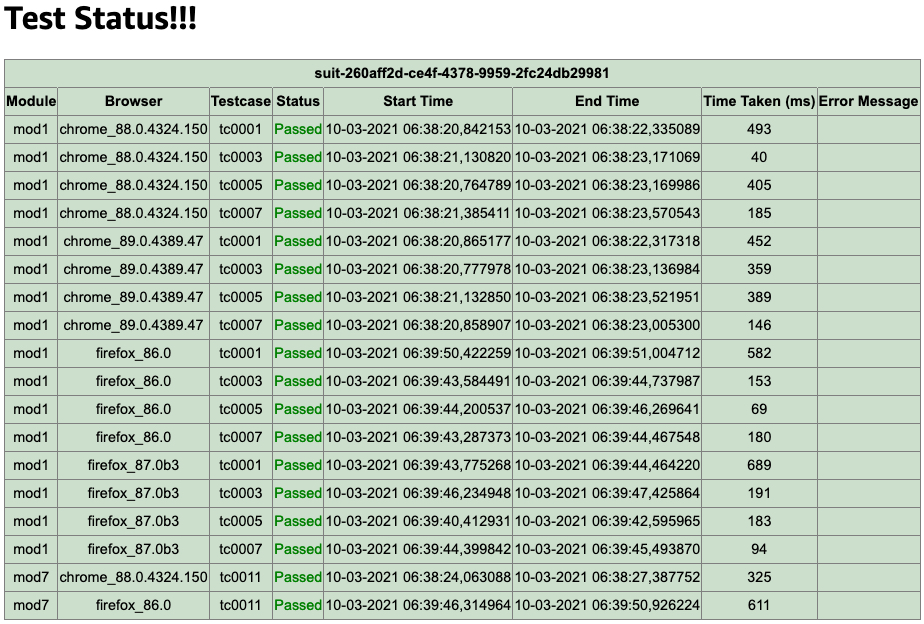 The state machine has a task state and a parallel state with multiple Map states in it:

Recording the test run as a video

One of the parallel states in the state machine is to record the video of the test execution. To record the test run as a video, we use headful Chrome and Firefox and need a display where the headful browser can launch. Because we can’t have a graphical display in both Lambda and Fargate, we use X virtual framebuffer (Xvfb) and PyVirtualDisplay, which is a Python wrapper for Xvfb. In this example, we set the DISPLAY environment variable to :25 in the Lambda function and Fargate container, then start the Xvfb on display :25. We use FFmpeg to listen to input on display :25 in x11grab format and write output to a file in .mp4 format. When the recording is complete, you upload it to Amazon S3 from the local file system.

Recording video might need additional compute resources and run longer than needed for only running the tests. Therefore, you can conditionally record video (rerun a failed test to record it as a video for debugging).

To clean up the resources that got created as part of this solution, delete the following resources.

In this post, I showed how you can build a container image to use in both Lambda and Fargate. We integrated UI testing as part of the continuous delivery pipeline using CodePipeline, CodeBuild, AWS CloudFormation, and Step Functions.

You can extend this approach beyond UI testing and integrate complete automated testing using AWS Developer Tools and Serverless technologies. 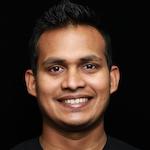 Prakash Palanisamy is a Solutions Architect at Amazon Web Services. When he is not experimenting with Serverless, Machine Learning, Quantum Computing or DevOps, he will be solving problems in Project Euler. He also enjoys watching educational documentaries.