Online multiplayer games, such as multiplayer online battle arenas (MOBA), are becoming increasingly popular. One option for game server hosting is to use on-premises data centers, which require multi-year contracts for a set number of resources. As the number of players for a given game grows, developers have to determine what to do if they reach the capacity limits in their datacenter operations.

The AWS Cloud allows companies to scale beyond their resources on demand with pay-as-you-go pricing. Using AWS is a great way for gaming developers to scale with load when they have reached their data center capacity.

This article discusses how the AWS Cloud can scale session-based games beyond existing data center capacity limits, without altering the existing game-ecosystem essentials. It also explains how companies can run game servers in locations where they don’t have a data center, by leveraging the global AWS Infrastructure. This approach reduces the latency and improves the player experience by using game servers closer to the players in those Regions.

In addition, this post demonstrates how to connect a VPN connection from an on-premises data center to an AWS Transit Gateway to establish a private connection between resources allocated in the AWS Cloud and the on-premises games ecosystem. It also covers how to use Auto Scaling Groups to scale a game server fleet in multiple AWS Regions.

Modern online games have at least three major components that are relevant for this article. The first one is a matchmaker, the second one is the game backend, and the third is the game serve.

These three components work closely together to create the game sessions. Typically, a matchmaker doesn’t have a low latency requirement. Thus, there is only one matchmaker in one location (i.e. Asia, North America, South America and EU.) Game server fleets are distributed all over these locations to reduce the latency for players within one game session – for example, one matchmaker and a game backend for Europe based in Frankfurt with game server fleets in Frankfurt, London, and Stockholm. 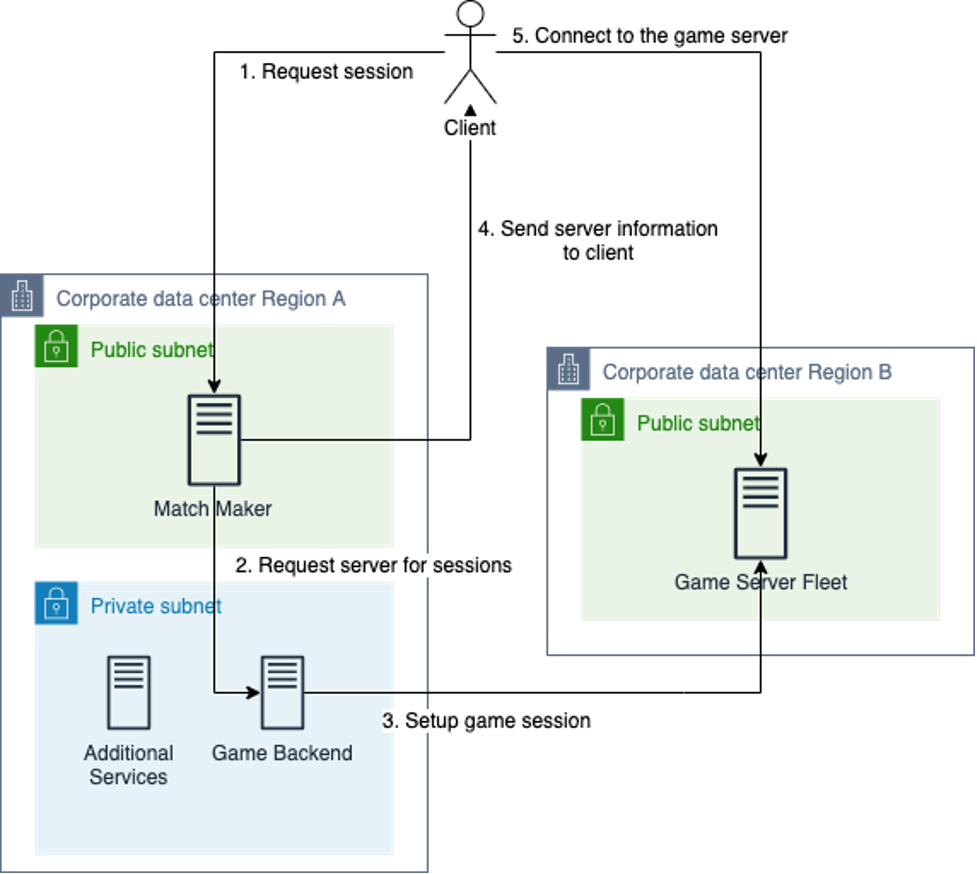 It is worth noting that there are other parts in a modern online game architecture. This article omits these to reduce its complexity and focus on the hyper scaling aspects of games.

Hybrid architecture allows scaling beyond the limits of the on-premises data center. It helps to cover local game server blind spots without the need to re-architect the game backend, matchmaker and game server applications.

Setting up a hybrid network for a session-based multiplayer game

The first step in setting up a data center extension is configuring the networking components. This is required to establish private connectivity between the on-premises ecosystem and the AWS Cloud.

The following sections of this blog post describe how to:

Before setting up the private connection, a Virtual Private Clouds (VPC) for game server fleets is required. A VPC is a logically isolated network space in the AWS Cloud where the game server resides. Since the game server instances in this example are reachable from internet, a simple VPC with two or three public subnets in different Availability Zones (AZs) within the desired Region is sufficient. 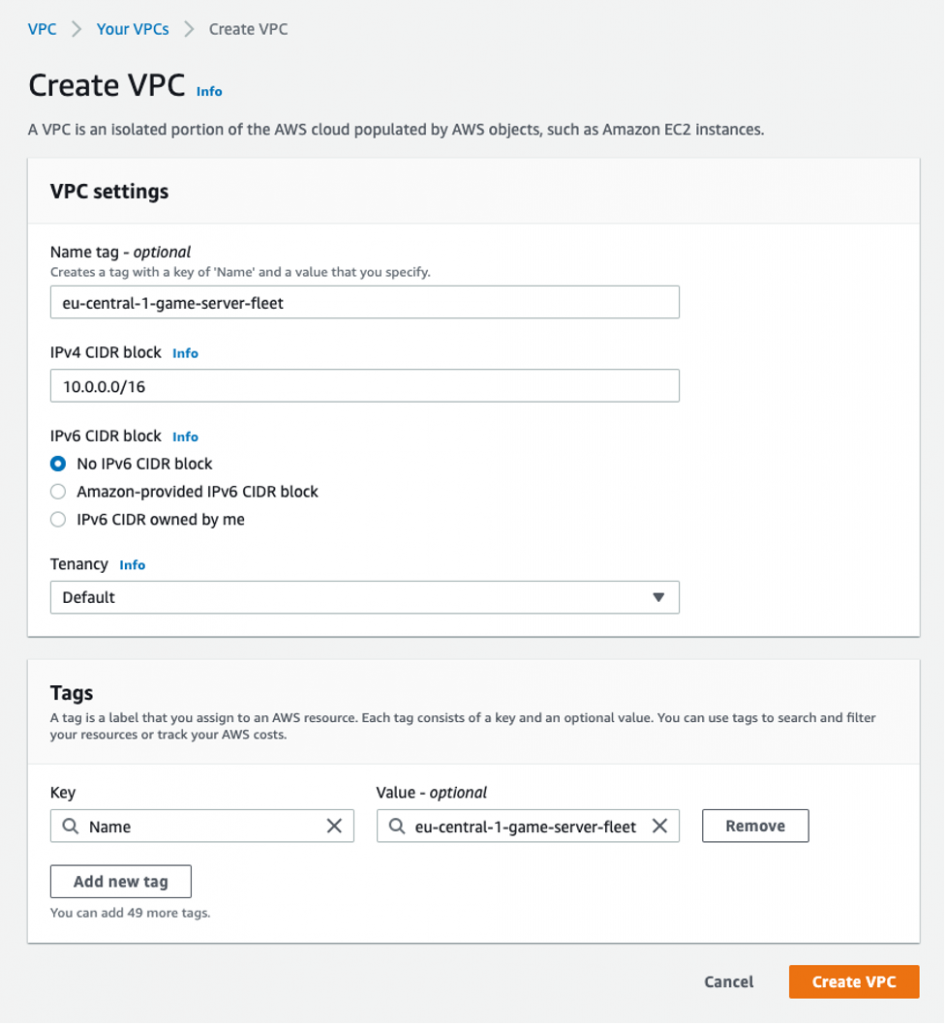 This will create a VPC with the given CIDR, a default Route Table and a Network Access Control List (Network ACL).

The next step is to divide the VPC into subnets. Each subnet should have a distinct CIDR block. It’s good practice to name a subnet according to the Availability Zone it resides in. 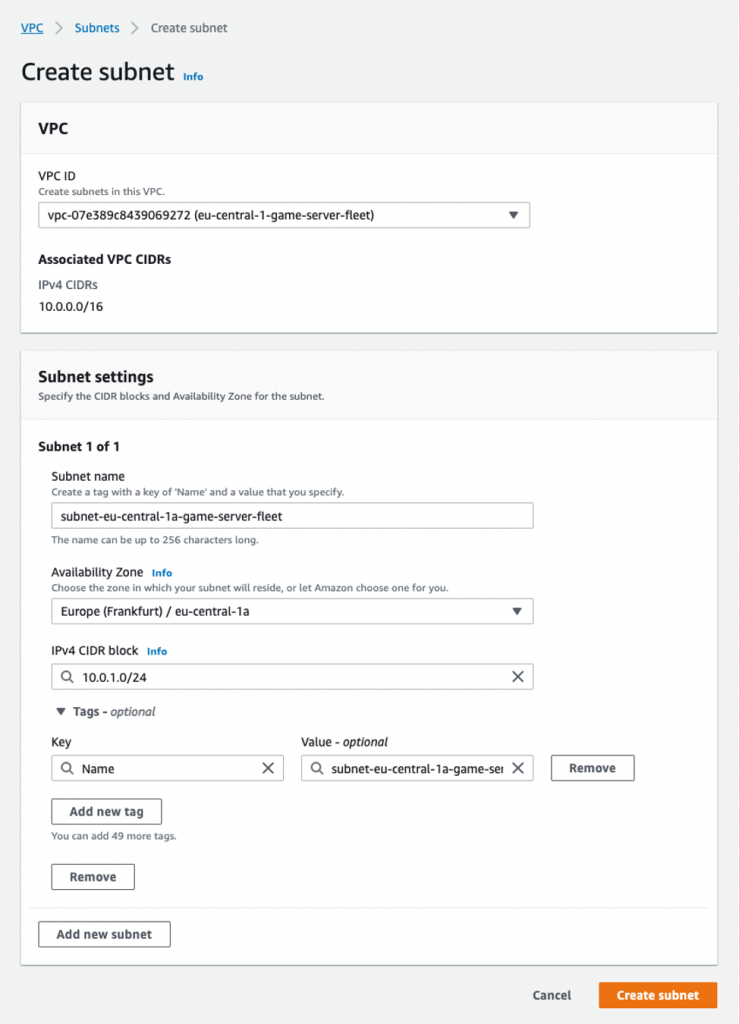 As the game servers require an internet connection, next add an Internet Gateway to the VPC. 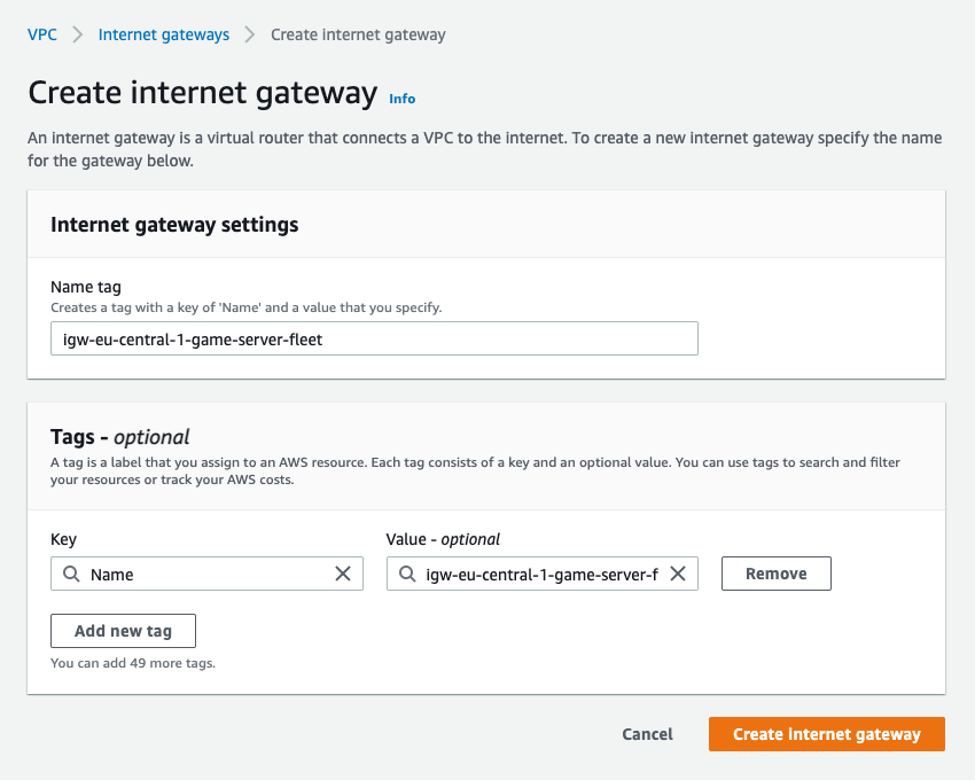 The next step for a functional VPC is to edit the default route table to route traffic to the internet and associate the subnets to it.

Additionally, associate the subnets with the Route Table. 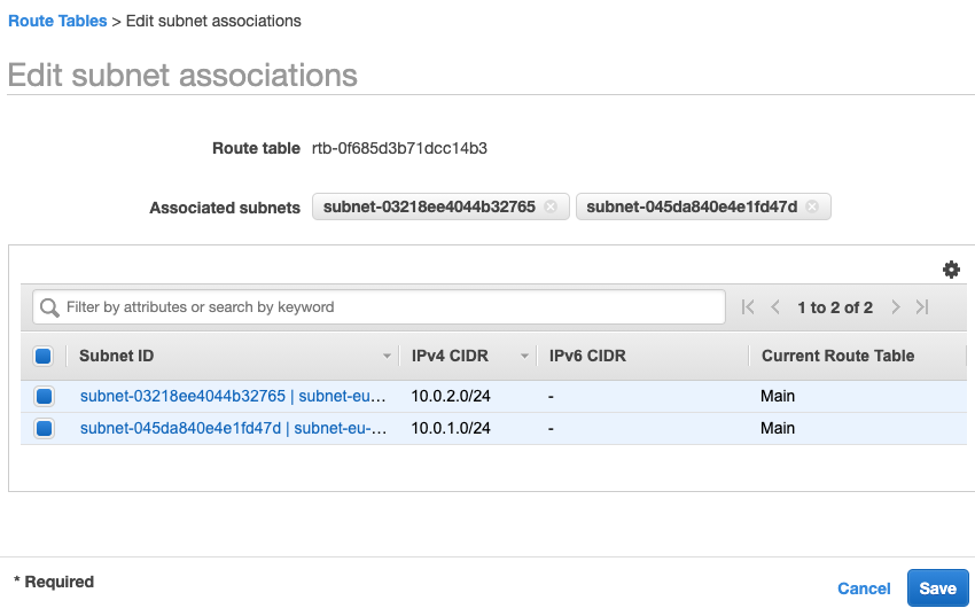 Setup of the AWS Transit Gateway as central network hub

Use an AWS Transit Gateway as a central entry point to the AWS Network to route traffic to multiple AWS Regions later on.

In the AWS Management Console: 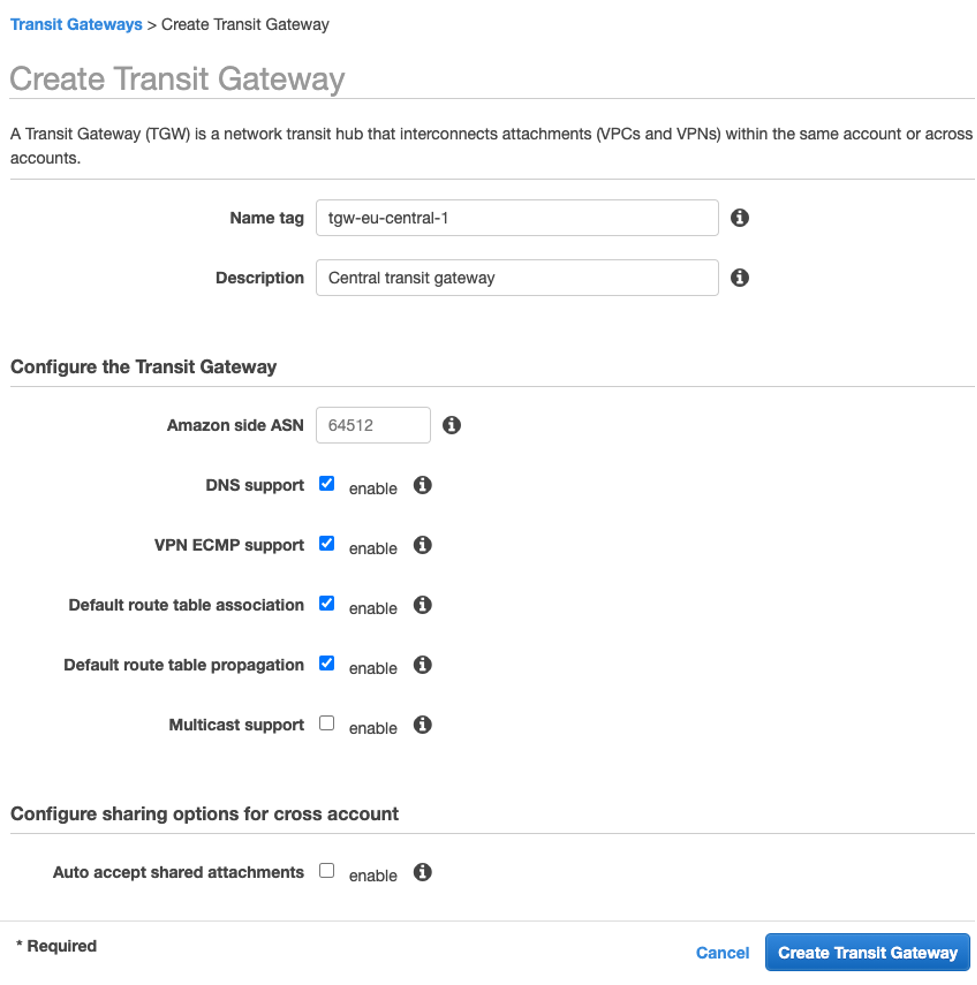 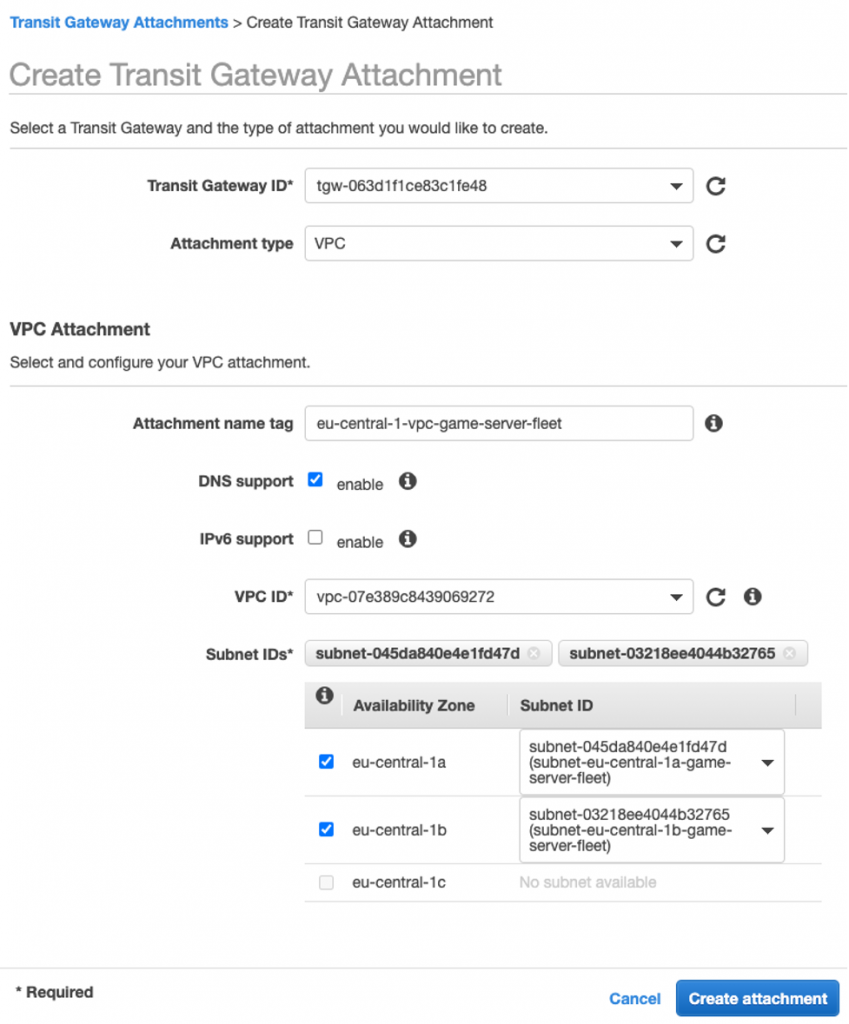 To verify the route information:

The next step and last step of the networking component is to establish a connection from the on-premises data center to the new game server fleet VPC. The focus of this article is on using a VPN connection; however, the VPN connection may be exchanged with an AWS Direct Connect if a low-latency, low-jitter, and high-throughput connection is required.

To establish a VPN connection to an on-premises VPN server, open the AWS Management Console and complete the following: 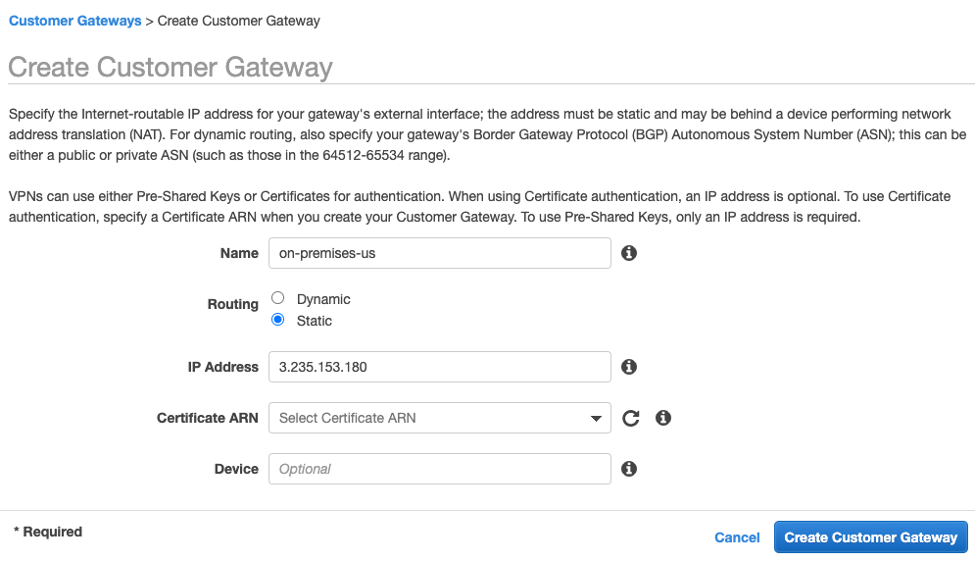 After the creation of the Customer Device, set up the Site-to-Site VPN. 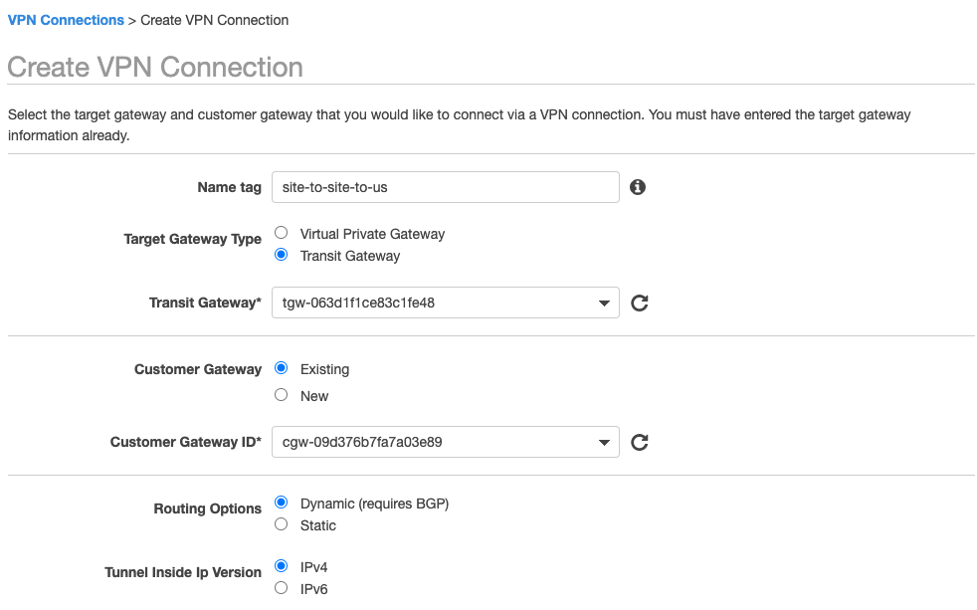 After a couple of minutes, the Amazon Site-to-Site VPN is provisioned and the Transit Gateway Route Table can be adjusted so that traffic with an on-premises destination is routed to the VPN connection. 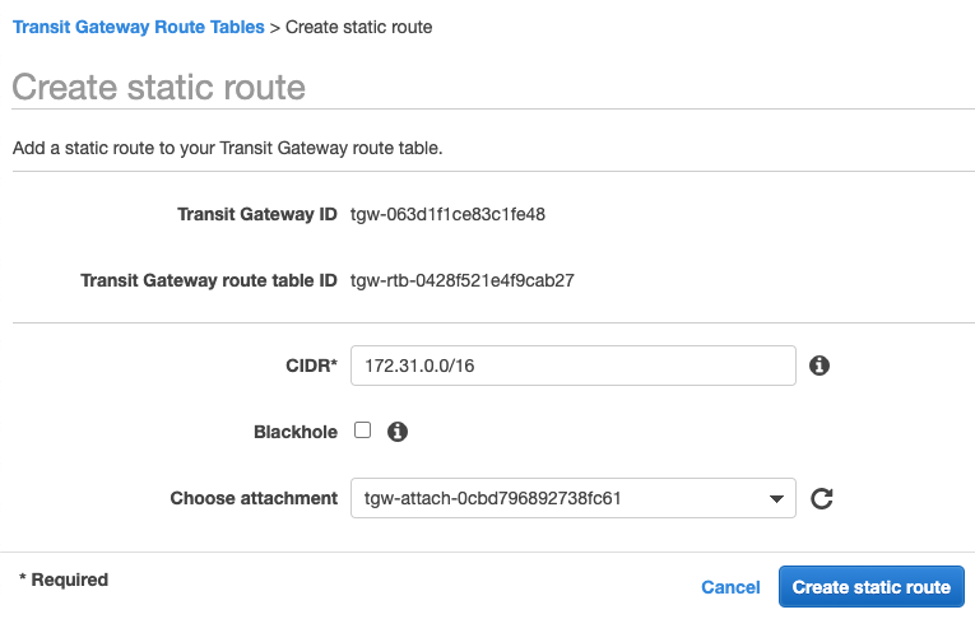 One step to achieve connectivity from the game server fleet VPC. Because in this case traffic would be routed to the VPN Attachment, traffic must be route from the VPC to the Transit Gateway, if the traffic’s target is the on-premises CIDR range. 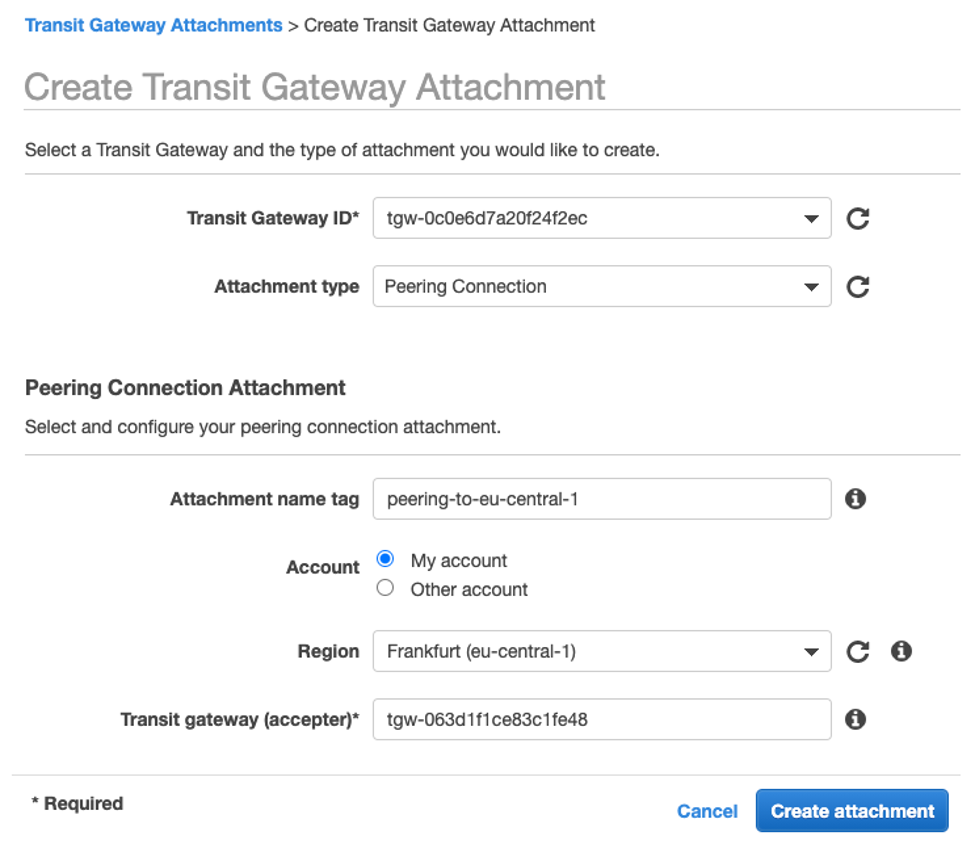 This initializes a peering request to the Transit Gateway that must be accepted to function as desired.

Peering two Transit Gateways doesn’t create a route between the resources. Thus, the route tables of the AWS Transit Gateway need to be adjusted so that traffic from the second Region, with the destination of on-premises, is routed to the peering and vice versa. Refer to the VPN Connection section above for the process of adding a route to the default Route Table.

The VPC’s Default Route Table in the second game server Region needs to route the traffic for the on-premises destination to the Transit Gateway in the second Region.

Once the AMI is created, use an EC2 Launch Template to standardize the configuration of the Auto Scaling group. The template contains all configuration information to launch an instance, like the instance type, key pair, and which VPC the instance should be deployed to.

In this architecture, the desired instance count of an Auto Scaling group is the primary value used for scaling the game server fleet. It is either manipulated manually, based on a custom calculated metric of the matchmaker, or by a scaling policy.

One way to scale a game server fleet is based on a metric of the server. A common CloudWatch metric used for adjusting the desired instance count of an Auto Scaling group is the CPU utilization. While this is good practice for web-based applications, it’s not suitable for session-based multiplayer games as the game instance server metrics do not reflect the current demand of game sessions.

The game backend knows how many players are queued, how many servers are currently running, the current wait time for players, and much more. This means that you can calculate a metric from this data, and that can be published to Amazon CloudWatch on a regular basis. Depending on the value of the metric, you can use CloudWatch to raise alarms for high and low states. This alarm is used to create scaling policies that describe how the Auto Scaling group adjusts its desired value. For further details of Auto Scaling groups, visit AWS Blog Category: Auto Scaling.

The second option is to use manual scaling by setting the desired instance count of the Auto Scaling group. This allows granular and fast adjustments to meet the current game server demand. If the game requires one game server for every 10 players, and currently 100 players are waiting for a session, you could increase the desired value to meet demand without waiting for CloudWatch to rise an alarm to trigger the Auto Scaling group. These adjustments are made with the Command Line Interface (AWS CLI) or the Software development Kit (AWS SDK).

All this information is used to determine where a game session is scheduled. Additionally, it can be used to determine the desired instance count of an Auto Scaling group of a specific region to meet the demand in that region.

Here is an AWS CLI command example of how to manually scale an Auto Scaling group:

Preventing scale-in on game server with a running game session

In both scaling options the Auto Scaling group’s task is to complete a graceful shut down and startup of new game server. This can have major implications for the players if not taken care of properly. For example, it’s not a good customer experience if a game session is stopped because the fleet is scaling in and that instance is shut down. The Auto Scaling group has several options and hooks when scaling in and out that are used to handle this case.

For the given architecture, the most important feature is the ability to set the scale to protect an active game server from scaling. To prevent this, the game backend sets the instance scale to protect the game server when launching a new game session on it. This can either be done with the AWS SDK or the AWS CLI using the following command.

In the unfortunate event of a crash of an entire game server, a programmatic de-registration of a game server instance isn’t possible. You can use the Auto Scaling group lifecycle hook to inform you when instances shut down. This information can then be used to prevent the game backend from trying to setup shut down instances.

If you are finished experimenting for today and want to stop using the resources you created, follow these steps in the AWS Management Console to avoid incurring unwanted cost.

This post explained how to set up a hybrid architecture to scale beyond existing data center capacity limits for online multiplayer games. You learned how to use the AWS Transit Gateway as a central network hub to the AWS Cloud and what options you have for scaling a game server fleet using the AWS Auto Scaling Groups. You also learned how to expand that hybrid architecture to enable scaling to multiple AWS Regions and how to prevent game server instances in those Regions from being stopped when scaling in.