NFL’s Next Gen Stats (NGS) powered by AWS accurately captures player and ball data in real time for every play and every NFL game—over 300 million data points per season—through the extensive use of sensors in players’ pads and the ball. With this rich set of tracking data, NGS uses AWS machine learning (ML) technology to uncover deeper insights and develop a better understanding of various aspects and trends of the game. To date, NGS metrics have focused on helping fans better appreciate and understand the offense and defense in gameplay through the application of advanced analytics, particularly in the passing game. Thanks to tracking data, it’s possible to quantify the difficulty of passes, model expected yards after catch, and determine the value of various play outcomes. A logical next step with this analytical information is to evaluate quarterback decision-making, such as whether the quarterback has considered all eligible receivers and evaluated tradeoffs accurately.

To effectively model quarterback decision-making, we considered a few key metrics—mainly the probability of different events occurring on a pass, and the value of said events. A pass can result in three outcomes: completion, incompletion, or interception. NGS has already created models that provide probabilities of these outcomes, but these events rely on information that’s available at only two points during the play: when the ball is thrown (termed as pass-forward), and when the ball arrives to a receiver (pass-arrived). Because of this, creating accurate probabilities requires modeling the trajectory of players between those two points in time.

For these probabilities, the quarterback’s decision is heavily influenced by the quality of defensive coverage on various receivers, because a receiver with a closely covered defender has a lower likelihood of pass completion compared to a receiver who is wide open due to blown coverage. Furthermore, defenders are inherently reactive to how the play progresses. Defenses move in completely different ways depending on which receiver is targeted on the pass. This means that a trajectory model for defenders has to similarly be reactive to the specified targeted receiver in a believable manner.

The following diagram is a top-down view of a play, with the blue circles representing offensive players and red representing the defensive players. The dotted red lines are examples of projected player trajectories. For the highlighted defender, their trajectory depends on who the targeted receiver is (13 to the left or 81 to the right). 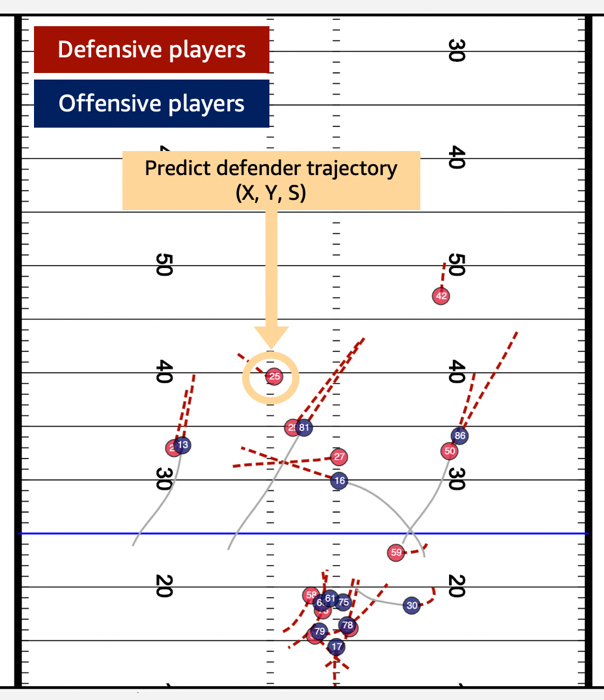 With the help of Amazon ML Solutions Lab, we have jointly developed a model that successfully uses this tracking data to provide league-average predictions of defender trajectories. Specifically, we predict the trajectories of defensive backs from when the pass is thrown to when the pass should arrive to the receiver. Our methodology for this is a deep-learning sequence model, which we call our Defender Ghosting model. In this post, we share how we developed an ML model to predict defender trajectories (first describing the data preprocessing and feature engineering, followed by a description of the model architecture), and metrics to evaluate the quality of these trajectory predictions.

We primarily use data from recent seasons of 2018 and 2019 to train and test the ML models that predict the defender position (x, y) and speed (s). The sensors in the players’ shoulder pads provide information on every player on the field in increments of 0.1 second; tracking devices in the football provide additional information. This provides a relatively large feature set over multiple time steps compared to the number of observations, and we decided to also evaluate feature importance to guide modeling decisions. We didn’t consider any team-specific or player-specific features, in order to have a player-agnostic model. We evaluated information such as down number, yards to first down, and touchdown during the feature selection phase, but they weren’t particularly useful for our analysis.

The models predict location and speed up to 15 time steps ahead (t + 15 steps), or 1.5 seconds after the quarterback releases the ball, also known as pass-forward. For passes longer than 1.5 seconds, we use the same model to predict beyond (t + 15) location and speed with the starting time shifted forward and resultant predictions concatenated together. The input data contains player and ball information up to five-time steps prior (t, t-1, …, t-5). We randomly segmented the train-test split by plays to prevent information leak within a single play.

We used an XGBoost model to explore and sub-select a variety of raw and engineered features, such as acceleration, personnel on the field for each play, location of the player a few time steps prior, direction and orientation of the players in motion, and ball trajectory. Useful feature engineering steps include differencing (which stationarize the time series) and directional decomposition (which decomposes a player’s rotational direction into x and y, respectively).

You can easily achieve inferencing by deploying this model to an endpoint:

You can easily extract feature importance from the trained XGBoost model, which is by default saved in a tar.gz format, using the following code:

The following graph shows an example of the resultant feature importance plot. 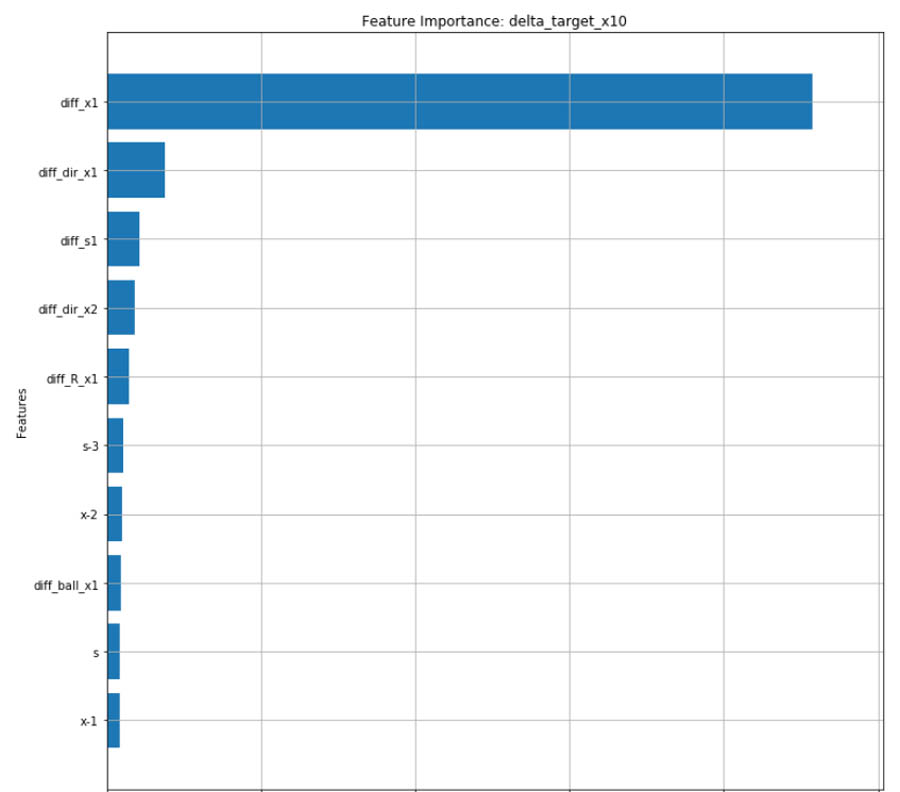 We used a multi-output XGBoost model as the baseline or benchmark model for comparison, with each target (x, y, speed) considered individually. In all three targets, we trained the models using Amazon SageMaker over 20–25 epochs with batch sizes of 256, using the Adam optimizer and mean squared error (MSE) loss, and achieved about two times better root mean squared error (RMSE) values compared to the baseline models.

The model architecture consists of a one-dimensional convolutional neural network (1D-CNN) and a long short-term memory (LSTM), as shown in the following diagram. The 1D-CNN block sizes extract time-dependent information from the features over different time scales, and dimensionality is subsequently reduced by max pooling. The concatenated vectors are then passed to an LSTM with a fully connected output layer to generate the output sequence.

The following diagram is a schematic of the Defender Ghosting deep learning model architecture. We evaluated models independently predicting each of the targets (x, y, speed) as well as jointly, and the model with independent targets slightly outperformed the joint model.

The code defining the model in Keras is as follows:

We developed custom metrics to quantify performance of a defender’s trajectory relative to the targeted receiver. The typical ideal behavior of a defender, from the moment the ball leaves the quarterback’s hands, is to rush towards the targeted receiver and ball. With that knowledge, we define the positional convergence (PS) metric as the weighted average of the rate of change of distance between the two players. When equally weighted across all time steps, the PS metric indicates that the two players are:

The following schematic shows the position of a targeted receiver and predicted defender trajectory at four time steps. The distance at each time step is denoted in arrows, and we use the average rate of change of this distance to compute the PS metric. 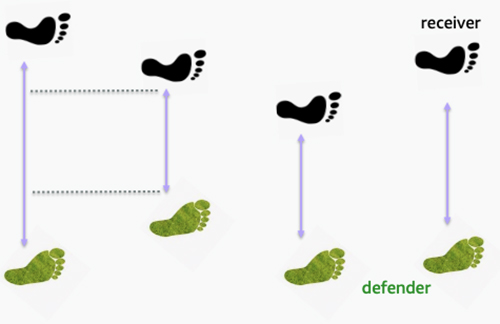 The PS metric alone is insufficient to evaluate the quality of a play, because a defender could be running too slowly towards the targeted receiver. The PS metric is thus modulated by another metric, termed the distance ratio (DR). The DR approximates the optimal distance that a defender should cover and rewards trajectories that indicate that the defender has covered close to optimal or humanly possible distances. This is approximated by calculating the distance between the defender’s location pass-forward and the position of the receiver at pass-arrived.

Putting this together, we can score every defender trajectory as a combination of PS and DR, and we apply a constraint for any predictions that exceed the maximum humanly possible distance, speed, and acceleration. The quality of a defensive play, called defensive play score, is a weighted average of every defender trajectory within the play. Defenders close to the targeted receiver are weighted higher than defenders positioned far away from the targeted receiver, because the close defenders’ actions have the most ability to influence the outcome of the play. Aggregating the scores of all the defensive plays provides a quantitative measure of how well models perform relative to each other, as well as compared to real plays. In the case of the deep learning model, the overall score was similar to the score computed from real plays and indicative that the model had captured realistic and desired defensive characteristics.

Evaluating a model’s performance after changing the targeted receiver from the actual events in the play proved to be more challenging, because there was no actual data to help determine the quality of our predictions. We shared the modified trajectories with football experts within NGS to determine the validity of the trajectory change; they deemed the trajectories reasonable. Features that were important to reasonable trajectory changes include ball information, the targeted receiver’s location relative to the defender, and the direction of the receiver. For both baseline and deep learning models, increasing the number of previous time steps in the inputs to the model beyond three time steps increased the model’s dependency on previous trajectories and made trajectory changes much harder.

The quarterback must very quickly scan the field during a play and determine the optimal receiver to target. The defensive backs are also observing and moving in response to the receivers’ and quarterback’s actions to put an end to the offensive play. Our Defender Ghosting model, which Amazon ML Solutions Lab and NFL NGS jointly developed, successfully uses tracking data from both players and the ball to provide league-wide predictions based on prior trajectory and the hypothetical receiver on the play.

Lin Lee Cheong is a Senior Scientist and Manager with the Amazon ML Solutions Lab team at Amazon Web Services. She works with strategic AWS customers to explore and apply artificial intelligence and machine learning to discover new insights and solve complex problems.

Ankit Tyagi is a Senior Software Engineer with the NFL’s Next Gen Stats team. He focuses on backend data pipelines and machine learning for delivering stats to fans. Outside of work, you can find him playing tennis, experimenting with brewing beer, or playing guitar.

Xiangyu Zeng is an Applied Scientist with the Amazon ML Solution Lab team at Amazon Web Services. He leverages Machine Learning and Deep Learning to solve critical real-word problems for AWS customers. He loves sports, especially basketball and football in his spare time.

Michael Schaefer is the Director of Product and Analytics for NFL’s Next Gen Stats. His work focuses on the design and execution of statistics, applications, and content delivered to NFL Media, NFL Broadcaster Partners, and fans.

Michael Chi is the Director of Technology for NFL’s Next Gen Stats. He is responsible for all technical aspects of the platform which is used by all 32 clubs, NFL Media and Broadcast Partners. In his free time, he enjoys being outdoors and spending time with his family.

Mehdi Noori is a Data Scientist at the Amazon ML Solutions Lab, where he works with customers across various verticals, and helps them to accelerate their cloud migration journey, and to solve their ML problems using state-of-the-art solutions and technologies.