AWS customers with data located in multiple AWS Regions often ask about moving files from AWS Regions outside of China to the AWS China (Beijing) Region and the AWS China (Ningxia) Region to localize data within China for compliance, data center operations, and data storage requirements. To best serve customers in China and comply with China’s laws and regulations, AWS has collaborated with China partners with proper telecom licenses to deliver cloud services. The AWS Region in Beijing, which was generally available to Chinese customers in 2016, is operated by Beijing Sinnet Technology Co. Ltd. (Sinnet), and the AWS Region in Ningxia, which was launched in 2017, is operated by Ningxia Western Cloud Data Technology Co., Ltd. (NWCD).

To move data from an AWS Region outside of China to one in China, you can use the step-by-step guide provided here to create a solution using AWS services. This solution is designed to let you transfer thousands of large Amazon S3 objects from buckets in an AWS Region outside of China to buckets in an AWS China Region. This solution is one-directional, and cannot be used to move data from AWS China Regions to any other AWS Region.

In this approach, you are going to set up an Amazon Simple Queue Service (Amazon SQS) event with Amazon S3. For new files created in the Amazon S3 bucket, Amazon SQS queues the new file information. At the same time, a Python code (worker cluster), running on Amazon EC2 instances, and scaling group pulls file information from Amazon SQS. It splits files into threads and transmits them into S3 buckets in an AWS China Region. The code that runs on the worker cluster also adds file details in Amazon DynamoDB that can be analyzed.

The following diagram represents the architecture that we walk through in this post: 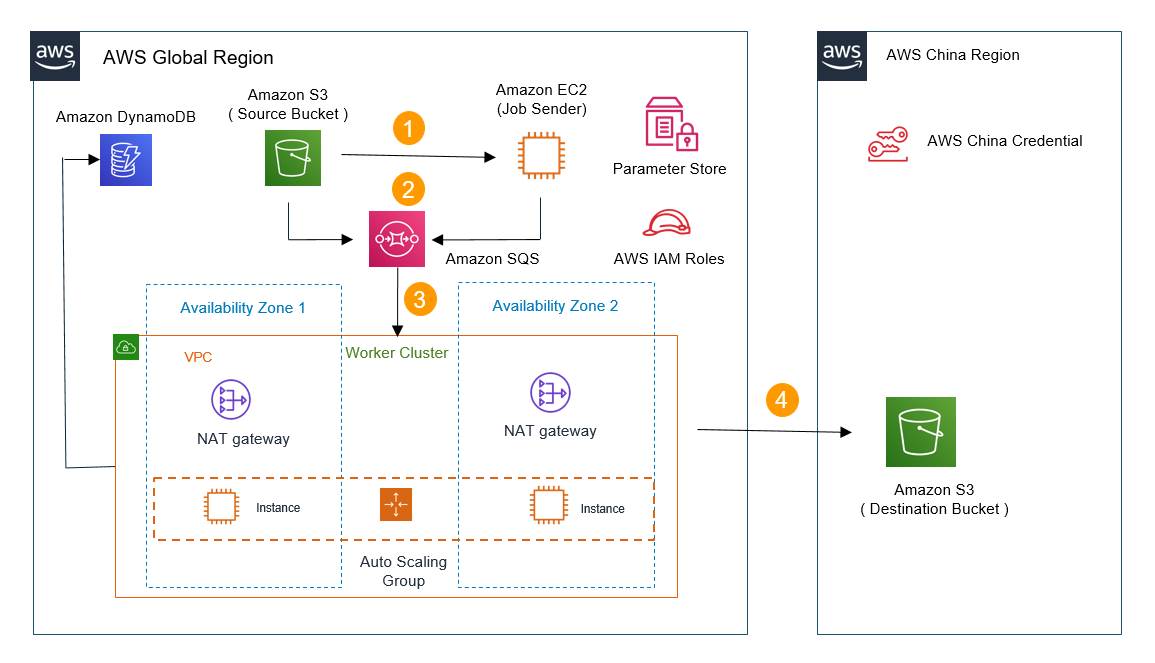 To optimize the workload, you should deploy the worker cluster in the same AWS Region as the source S3 bucket. You can also manage the security information and IAM credentials of the AWS China Region in the AWS SSM Parameter Store.

We have shared the code at the AWS Samples GitHub library. Download the code from the repository Amazon S3 resumable upload.

Here are the steps and components of this solution:

Download the solution from GitHub library. This code uses the AWS CDK. The AWS CDK is a software development framework for defining cloud infrastructure in code and provisioning it through AWS CloudFormation.

Prerequisite to deploy the sample code:

Before deploying the code, you must update the configuration files and AWS SSM Parameter Store so that your code can execute as expected. Here are the steps:

2: Edit the app.py file in the code you have downloaded and provide your source and destination bucket mappings.

These mappings are stored in the AWS SSM Parameter Store, which you can update later.

4: (optional step) you can modify the default config file, “./code/s3_migration_cluster_config.ini”, based on your requirements. For example, you can change the Amazon S3 storage class. You can also modify retry and logging levels. We recommend that you refer to this file and look at different configuration options.

Some other configurable options are:

5. Build and deploy the AWS CDK application, Refer to the CDK developer guide for deployment instruction of CDK solutions.

You can upload sample objects to your source S3 bucket to test the solution. Uploaded files from the source S3 bucket should start to be available in the destination S3 bucket within minutes, depending on object volume and size. When we tested this solution using five objects, on a single node c5.large instance (setting 5 files X 30 threads in this test), throughput reached up to 800 Mbps. Your results may vary on network speed. Transfer performance can be affected by current usage of network traffic and the network environment.

In another test, we increased the number of objects to 916, and the Auto Scaling group added nine Amazon EC2 instances (C5.large) to transfer 1.2 TB (916 files) in one hour reaching 7.2 Gbps of throughput. You can also use DynamoDB data to connect with Amazon QuickSight and analyze your file transfer details.

This solution uses an Amazon EC2 congestion-based congestion control algorithm, TCP bottleneck bandwidth and round trip (TCP BRR), which improves network performance. It also uses the public network. Transfer rates can be affected by many factors, including your network conditions, the link sections when routing to an overseas Region, and various telecom network carriers at home and abroad.

Furthermore, we recommend using AWS Direct Connect from AWS Regions outside of China to those in China by contacting AWS Direct Connect Partners such as Wangsu and China Mobile. Please consult with a partner for more speciﬁc plans, contracts, quotes, and cycles. AWS China Regions in Beijing and Ningxia are not connected to the AWS global backbone and infrastructure. To reduce potential packet loss and lower latency between AWS China Regions and AWS Regions outside of China, China ISPs provide internet route optimization. Chinese ISPs, such as China Telecom, also provide value added solutions for further optimization of internet access. To help customers connect to VPCs in China and other Regions, Chinese ISPs like China Mobile and China Telecom provide dedicated lines for customers via AWS Direct Connect. By using China Mobile, for example, a hosted connection can be set up in one week. Customers must sign a contract directly with ISP, similar to the process in any other Region. Last but not least, customers must comply with Chinese laws in determining schemes for data transfer and localization. To learn more about getting started with AWS Services in AWS China (Beijing) Region and AWS China (Ningxia) Region, read this blog post.

After testing, you should delete this solution and any example resources you deployed if you do not need them, to avoid incurring unwanted charges. As this solution is based on an AWS CloudFormation change set, please refer to the documentation for deleting a change set.

Using Amazon EC2, Amazon SQS, and Amazon DynamoDB, you can move Amazon S3 objects from AWS Regions to AWS China Regions. You can also enhance the transfer speed to upload objects from an AWS Region outside of China to an AWS China Region. To do so, you use an Amazon S3 multipart upload and TCP bottleneck bandwidth and round trip (TCP BRR) congestion control algorithm. China is an important country for global companies, and if your business or operation is expanding in China, this solution can help you move your data or files to an AWS China Region. To get started with AWS services in China, please refer to the blog post Getting Started with AWS Services in AWS China (Beijing) Region and AWS China (Ningxia) Region.

Thanks for reading this blog post! If you have any comments or questions, please leave them in the comments section.