At Chaos Gears, an AWS Advanced Consulting Partner, we help customers and companies of all sizes utilize Amazon Web Services (AWS) to its full potential so they can focus on evolving their business.

One of our customers, a startup from the medical industry, has gained a global reach and serves its clients by operating in multiple AWS regions (currently 10 with more scheduled to come) spanning many time zones.

At the center of each region, there’s an Amazon Elastic Compute Cloud (Amazon EC2) instance that, by design, occasionally maxes out on the CPU. When this happens, a member of the customer’s operations team runs a set of checks to determine whether the instance is reachable; if it’s not, it gets restarted.

Once restarted and back online, which takes a few minutes, the same round of checks recommences. More often than not, this approach proves sufficient and the on-call engineer handling the issue can get back to work.

Being a startup and lacking the resources to man a follow-the-sun operations team, the customer came to Chaos Gears requesting a simple, adjustable, and cost-effective solution that would relieve their engineers from such an operational burden.

Before launching this solution, the on-call engineers needed to identify the affected instances, spread among different AWS regions, manually run a set of pre-defined checks on each one, and, based on the outcome, either do nothing or restart the pertinent machines and rerun the checks.

In today’s world of agile software development, our team at Chaos Gears treats everything as code, or at least we should be doing that.

Hence, the first decision we made for the customer was to leverage the AWS Cloud Development Kit (AWS CDK), a multi-language software development framework for modelling cloud infrastructure as reusable components as our infrastructure as code (IaC) tool.

Our customer’s software engineers were already familiar with TypeScript, the language we chose to build out the infrastructure with, which meant they’d comprehend the final solution quickly.

Moreover, we avoided the steep learning curve of mastering a domain-specific language (DSL) and the additional burden of handling an unfamiliar codebase.

On top of all of that, we could reuse the existing software tooling like linters and apply the industry’s coding best practices.

The adage says that “no server is better than no server,” and with that in mind we turned our heads towards AWS Step Functions, a serverless orchestrator for AWS Lambda and other AWS services.

The challenge at hand was perfect for an event-driven architecture, and we had already envisioned the subsequent steps of the verification process:

We needed the glue, and with AWS Step Functions we effortlessly combined all of those pieces without worrying about server provisioning, maintenance, retries, and error handling.

We had the backbone figured out, but we still had to decide how to monitor the CPU usage on the Amazon EC2 instances and pass the knowledge of a breach to AWS Step Functions state machine.

It screamed of Amazon CloudWatch alarms for the metric monitoring bit and Amazon EventBridge for creating a rule for routing the alarm event to the target (a state machine, in our case).

When the ‘CPUUtilization’ metric for a given instance reaches 100%, a CloudWatch alarm enters the ‘alarm’ state. This change gets picked up by an EventBridge rule that triggers the AWS Step Functions state machine.

Upon receiving the event object from the EventBridge rule, the state machine orchestrates the following workflow: 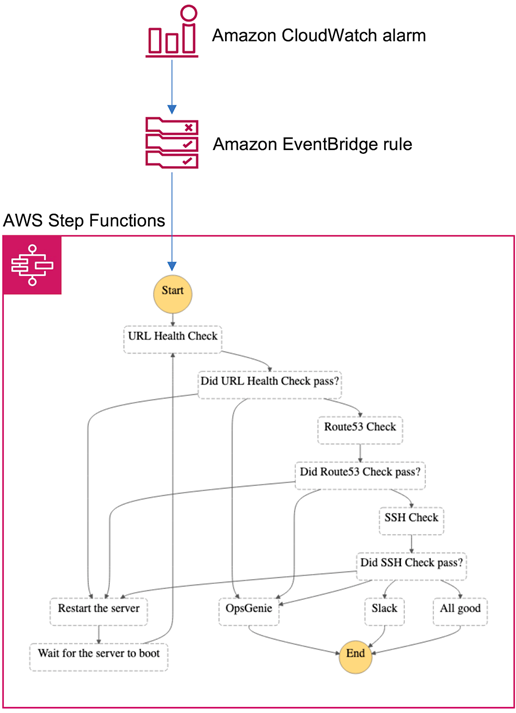 All of the above-mentioned resources, plus the Lambda functions, an Amazon Simple Storage Service (Amazon S3) bucket for the Lambda code packages, and the necessary AWS Identity and Access Management (IAM) roles and policies are created and managed by AWS CDK and AWS SAM.

A Peek at the Code

A public repository is available on GitHub with a full working solution and a detailed README. I won’t dissect all of the code here, but let me draw your attention to some of the more interesting elements.

In the project’s root directory, we keep a ‘tsconfig.json’ file responsible for configuring the TypeScript’s compiler, and an ‘.eslintrc.json’ file holding the configuration for ES Lint, a popular JavaScript linter.

These two configuration files serve the entire project since we use TypeScript for both the infrastructure and application layers.

AWS CDK’s support for many popular general-purpose languages (TypeScript, JavaScript, Python, Java, C#, and Go, which is in developer preview) enables and encourages the DevOps culture by making the end-to-end development experience more uniform, as you can use familiar tools and frameworks across your whole stack.

Now, let’s take a closer look at the ‘bin/cpu-check-cdk.ts’ file, the point of entry to our CDK app, whence all stacks are instantiated.

We imported all of the necessary dependencies one library at a time, but in AWS CDK v2 all of the CDK libraries are consolidated in one package.

Next, we check whether all of the necessary environment variables have been set.

Then, we initialize the CDK app construct.

We grab the regions to which to deploy, along with corresponding instance IDs to monitor from AWS CDK’s context.

Next, we create a tags object with the app’s version and repo’s URL taken directly from the package.json file.

Finally, we loop through the map of regions and corresponding instance IDs we grabbed earlier.

In each region, we produce eight stacks: one for every Lambda function, one for the state machine, and one for the metric, alarm, and rule combo.

Thanks to using a basic programming concept of the for loop, we saved ourselves from unnecessary duplication by keeping things DRY (Don’t Repeat Yourself).

Nice and easy, and all in one go, regardless of the number of regions to which we would want to deploy, and mind you, there are 25 available (with more to come).

I won’t be going through all of the AWS CDK and Lambda files in this post, though I strongly encourage you to give the code a thorough review.

Notwithstanding, let’s see how easy it is to define a stack class in AWS CDK looking at the `lib/lambda-stack.ts` file. First, we import the dependencies:

You’ll notice there is a helper function called `capitalizeAndRemoveDashes` amongst the CDK libs. Since AWS CDK uses a GPL, we can introduce any amount of custom logic, as we could do with a _regular_ application.

The `lib/helpers.ts` file looks as follows:

Next, we extend the default stack properties like description with ours, setting some as mandatory and some as optional.

We start a declaration of the `LambdaStack` class with a `lambdaFunction` read-only property and a constructor.

We then create a resource name out of the mandatory name property that will be passed in during the class initialization.

We create an IAM role that the Lambda service can assume. We add the `service-role/AWSLambdaBasicExecutionRole` AWS-managed policy to it and, if provided, a custom user-managed policy.

Finally, we expose the Lambda function object as the class’s read-only property we defined earlier. We’re also sure to close our brackets to avoid the implosion of the universe.

In this post, I showed how our team at Chaos Gears put together a serverless application running AWS Lambda under the baton of AWS Step Functions to relieve our customer’s engineers from some of their operational burdens. This enables them to focus more on evolving their business.

The approach described here can be adapted to serve other needs or cover different cases, as AWS Step Functions’ visual workflows allow for a quick translation of business requirements to technical ones.

By using AWS CDK as the infrastructure as code (IaC) tool, we were able to write all of the code in TypeScript, which puts us in an excellent position for future improvements.

We avoided the trap of introducing unnecessary complexity and kept things concise with codebase that was approachable and comprehensive to all team members.

Check out the GitHub repository and visit the Chaos Gears website to learn more about collaborating with us.

Chaos Gears is an AWS Partner that helps customers and companies of all sizes utilize AWS to its full potential so they can focus on evolving their business.