Providing a better experience at lower cost is the desired result of any organization and product. In most cases, it requires software re-architecting, planning, infrastructure configurations, benchmarking, and more.

In this post, we share some of the best practices Epsagon has developed to improve the performance and reduce the cost of using serverless environments.

In AWS Lambda functions, cost equals performance. The main pricing factors are the number of requests and the GB-second duration. The GB-second duration is calculated from the time your code begins executing until it returns or otherwise terminates, rounded up to the nearest 100ms, multiplied by the memory configuration.

If we improved the performance of that 128MB function by 600ms, it would save $749 per month. That’s a savings of 37 percent. We have a strategy to make that happen.

Today, this service handles tens of billions of logs per day. To improve its performance and reduce cost, Epsagon built the following resilient pipeline. 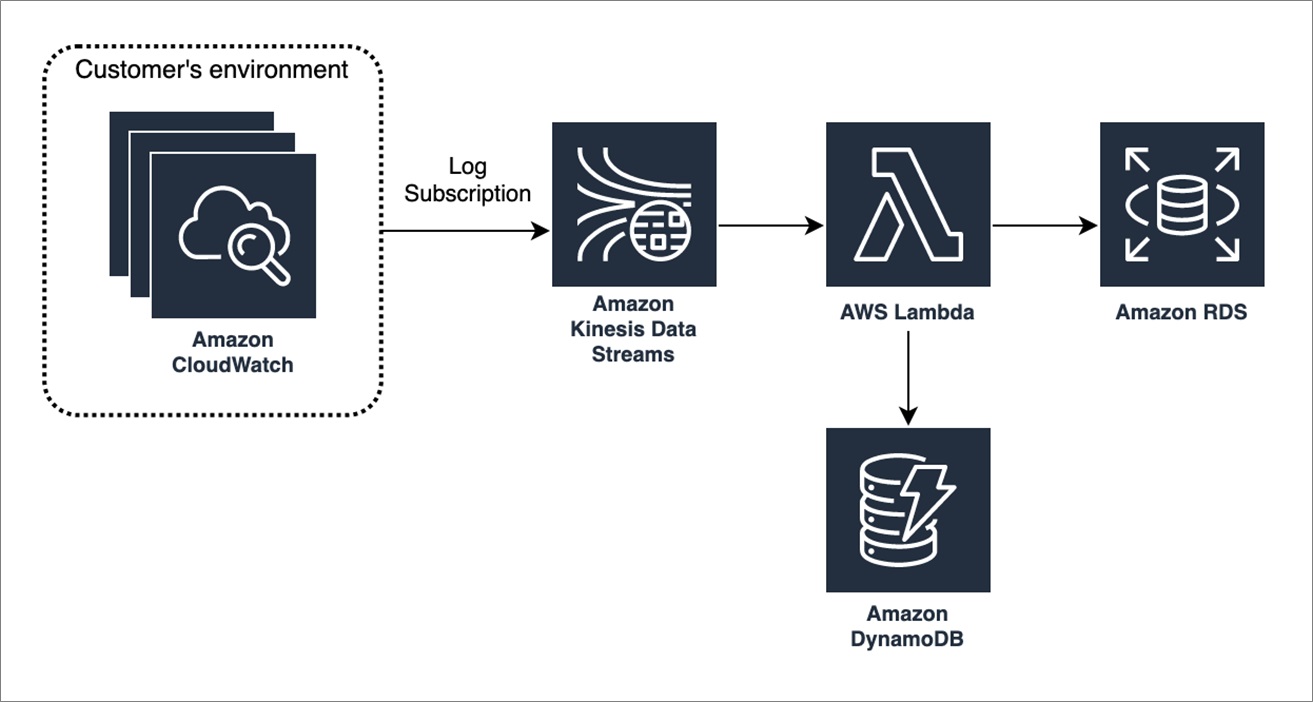 These are the major components of the pipeline:

Before we begin, we need to know what our current performance benchmark and costs are. Using Epsagon, we can easily spot the log parser as our most expensive function.

To optimize both the performance and cost of our log parser, we employed these techniques:

A great way to significantly improve performance in pipelines such as the log parser is to batch and group data together to minimize the number of invocations. In our log parser, we found three types of invocations we can batch:

We tested different batch sizes, and found out that by increasing Amazon Kinesis Data Stream batch size from 10 to 200 records, we retained almost the same duration. However, since we had much bigger chunks of data, we incurred fewer invocations. 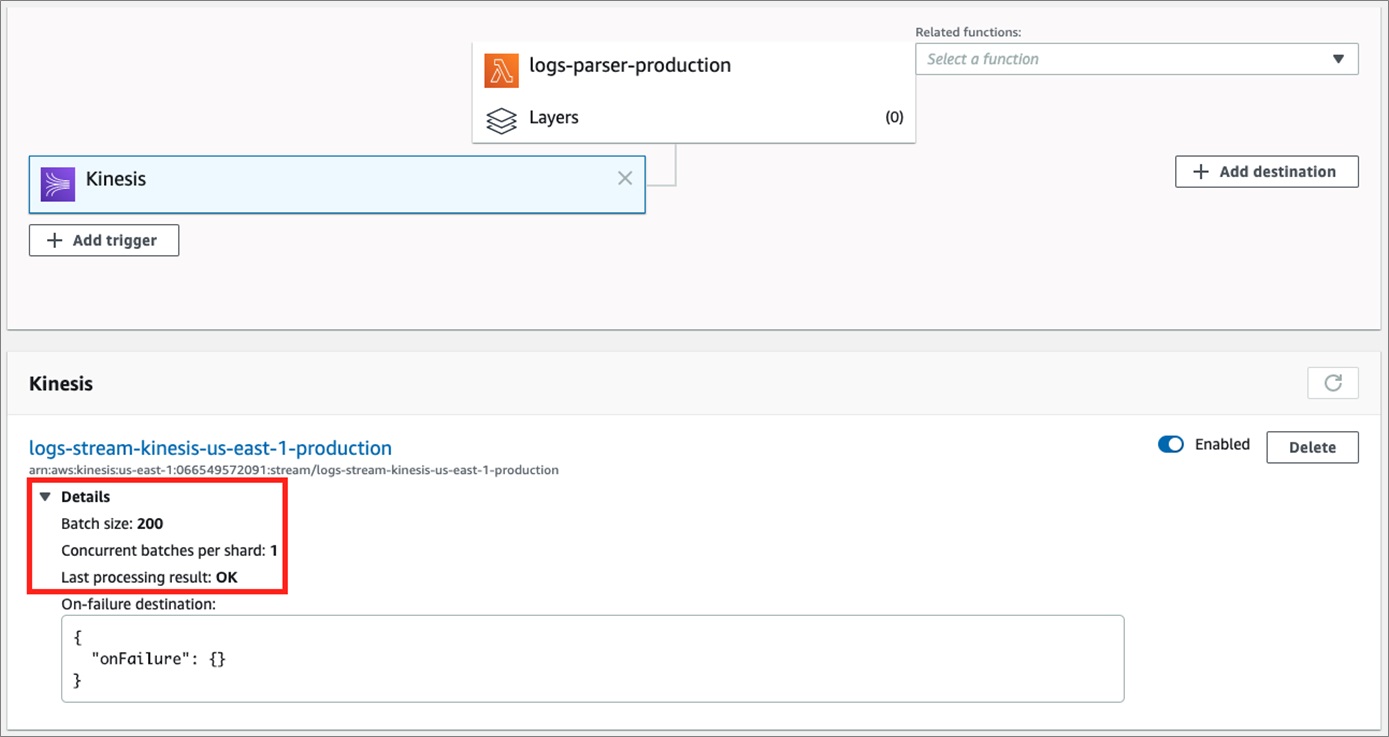 Since we were now handling bigger batches, we did not separately query the data of each record from DynamoDB. Instead, we used the batch_get_item call at the beginning of the process. It returns, in a single call, the enriched data for all the records.

Instead of storing the processed rows into the PostgreSQL RDS database individually, we batched them all into one INSERT CALL.

The combination of both optimizations, the use batch_get_item and a single INSERT call, saved us about 400ms of invocations, on average. With very few changes in code and one configuration parameter, we reduced our number from about ~1400ms to 1000ms of invocations.

When using an external data source, caching the data locally can make a lot of sense. If the data is accessed often, as it is by DynamoDB in our log parser, local copies can improve performance and reduce costs. Of course, local caching makes sense only if the data is not constantly changing at very fast intervals.

To implement simple caching in our log parser, we set an item in the cache by using the following pattern in Python:

The CACHE function gets the key and the value to set in our cache, and appends the timestamp that fed into the cache.

Now, let’s look on how to retrieve data from the cache:

Using these lines of Python code, we can implement local caching with a time-to-live (TTL) for each item. For our log parser, we selected 3600 seconds, or one hour. Our cached data can be shared by the same instance of Lambda invocation. It’s not shared between parallel instances, and newly initialized instances.

This approach reduces the number of calls to DynamoDB by 30 percent. It also reduces our average DB-second duration by another 100ms.

In the Node.js sdk library, the default HTTP connection to AWS resources is set to ‘connection: close.’ It means that after every call, the connection is closed, and upon a new request, the whole handshake process starts from scratch.

In Node.js, you can set the keepAlive property of an HTTP or HTTPS agent to ‘true’. For example:

The preceding code globally sets the ‘connection: keep-alive’ flag for all clients. For more information on this setting, see Reusing Connections with Keep-Alive in Node.js. With Python and AWS SDK for Python (Boto3), the setting is unnecessary as ‘connection: close’ is not set as default.

In our log parser, setting keepAlive to true didn’t introduce a significant performance improvement. We only improved by about 50ms because we were already batching our calls, and in this specific function we didn’t make many calls using the aws-sdk resources. However, in many other cases we managed to remove hundreds of milliseconds from our function duration.

Initialize Connections Outside of the Handler

In the preceding code, if the connection to our database takes 20ms, it means that every invocation incurs an extra duration that is not really necessary. Instead, we take all connections out of the handler function so it will take place only once, when a new function instance spawns:

It became clear to us the function’s memory also affects the CPU and network performance. Choosing the right amount of memory can result in a faster function, and in some cases, lower cost.

The memory calculation can be tricky, but we’ll use a simple example to get across the basic idea.

If a function is running at 1000ms on average, and we define it with 128MBs, the price per invocation would be ~$0.000002. If doubling the memory would also double the performance, if the function had 256MB memory, it would run at 500ms on average. This means the price per invocation would be ~$0.000002. The same price, but twice as fast.

Note that 512MB of memory increases the cost because the pricing of an invocation is rounded up to the nearest 100ms; hence, we’re paying for 300ms.

The hardest part is to understand which memory size works best for each Lambda function. Luckily, with the open source lambda-memory-performance-benchmark, we were able to measure the best performance configuration:=.

The main reason to go with 1644MB is the 100ms interval pricing. On such a high scale, this 15ms difference between 290ms and 305ms has a significant impact on cost.

Our optimization process helped us realize that with proper visibility into our stack, we were able to clearly identify what and how to optimize. We not only improved the performance of the main AWS Lambda function in our pipeline, but also reduced the cost of the others services: Amazon Kinesis Data Streams, Amazon DynamoDB, and Amazon RDS tables:

It’s important to understand that when the scale is large, each small improvement in performance can dramatically impact the overall cost of services.

To get started measuring the performance and costs of your functions, use:

Epsagon is an AWS Competency Partner specializing in automated tracing for cloud microservices. Its solution builds on AWS tools by providing automated end-to-end tracing across distributed AWS services, and services outside of AWS.