Machine learning (ML) is highly iterative and complex in nature, and requires data scientists to explore multiple ways in which a business problem can be solved. Data scientists have to use tools that support interactive experimentation so you can run code, review its outputs, and annotate it, which makes it easy to work and collaborate with other teammates.

Amazon SageMaker Studio is the first fully integrated development environment (IDE) for ML. It provides a single, web-based visual interface where you can perform all ML development steps required to build, train, tune, debug, deploy, and monitor models. It gives data scientists all the tools you need to take ML models from experimentation to production without leaving the IDE.

Studio notebooks are one-click Jupyter notebooks that can be spun up quickly. The underlying compute resources are fully elastic, so you can easily dial up or down the available resources, and the changes take place automatically in the background without interrupting your work. You can also share notebooks with others in a few clicks. They get the exact same notebook, saved in the same place.

In this post, we take a closer look at how Studio notebooks have been designed to improve the productivity of data scientists and developers.

You can access the Jupyter notebooks by opening the browser and entering the URL of the Jupyter server, which makes an HTTPS/WSS call to the machine where the Jupyter server is hosted. The machine runs a notebook server that receives the request and uses zeromq to communicate with the kernel process.

Although this architecture serves data scientists’ needs well, once teams start growing and the ML workload moves to production, new sets of requirements come up. This includes the following:

Studio and one of its components, Studio notebooks, has been built to meet such requirements. The Studio IDE has been built to unify all the tools needed for ML development. Developers can write code, track experiments, visualize data, and perform debugging and monitoring all within a single, integrated visual interface, which significantly boosts developer productivity. The following screenshot shows what the IDE looks like.

Now, let’s understand how Studio notebooks are designed, with the help of a highly simplified version of the following architecture diagram (click for an enlarged view). 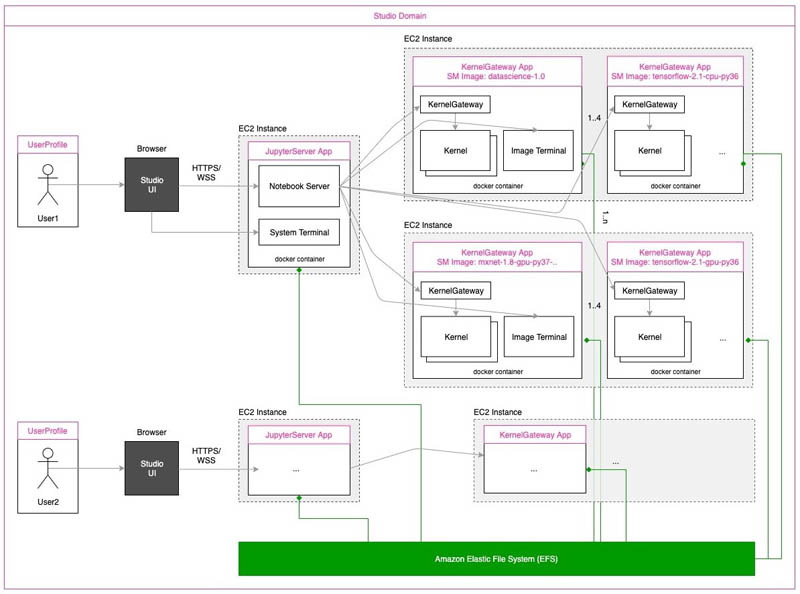 A Studio domain is a logical aggregation of an Amazon Elastic File System (Amazon EFS) volume, a list of users authorized to access the domain, and configurations related to security, application, networking, and more. A domain promotes collaboration between users where they can share notebooks and other artifacts with other users in the same domain.

Each user added to the Studio domain is represented by a user profile. This profile contains unique information about the user with in the domain, like the execution role for the user, the Posix user ID of the user’s profile in the Amazon EFS volume, and more.

Studio comes with several pre-built images. It also provides the option to bring your own image and attach it to a Studio domain. The custom image needs to be stored in an Amazon ECR repository. You can choose to either attach a custom image to the whole domain or to a specific user profile in the domain. For more information, see the SageMaker Custom Image Samples repository and Bringing your own custom container image to Amazon SageMaker Studio notebooks.

An app is an application running for a user in the domain, implemented as a Docker container. Studio currently supports two types of apps:

When a user accesses the Studio UI using a web browser, an HTTPS/WSS connection is established with the notebook server, which is running inside the JupyterServer container, which in turn is running on an EC2 instance managed by the service.

Studio uses the KernelGateway architecture to allow the notebook server to communicate with kernels running on remote hosts; as such, the Jupyter kernels aren’t run on the host where the notebook server resides, but are run in Docker containers on separate hosts.

Each user can have only one instance of a given type (such as ml.t3.medium) running, and up to four apps can be allocated on each instance; users can spawn multiple notebooks and terminals using each app.

If you need to run more than four apps on the same instance, you can choose to run on an underlying instance of a different type.

As an example, you can choose to run TensorFlow, PyTorch, MxNet, and Data Science KernelGateway apps on the same instance and run multiple notebooks with each of them; if you need to run an additional custom app, you can spin it up on a different instance.

No resource constraints are enforced between the apps running on the host, so each app might be able to take all compute resources at a given time.

Multiple kernel types can be run in each app, provided all the kernels have the same hardware requirements in terms of being run on either CPU or GPU. For example, unless differently specified in the domain or user profile configuration, CPU bound kernels are run on ml.t3.medium by default and GPU bound kernels on ml.g4dn.xlarge, giving you the option to choose different compute resources as needed.

You can also change these instance types if you require more compute and memory for your notebooks. When a notebook is opened in Studio, it shows the vCPU and memory of the EC2 instance (highlighted in yellow) on which the notebook is running.

You can choose the highlighted area and choose a different instance type, as shown in the following screenshot. 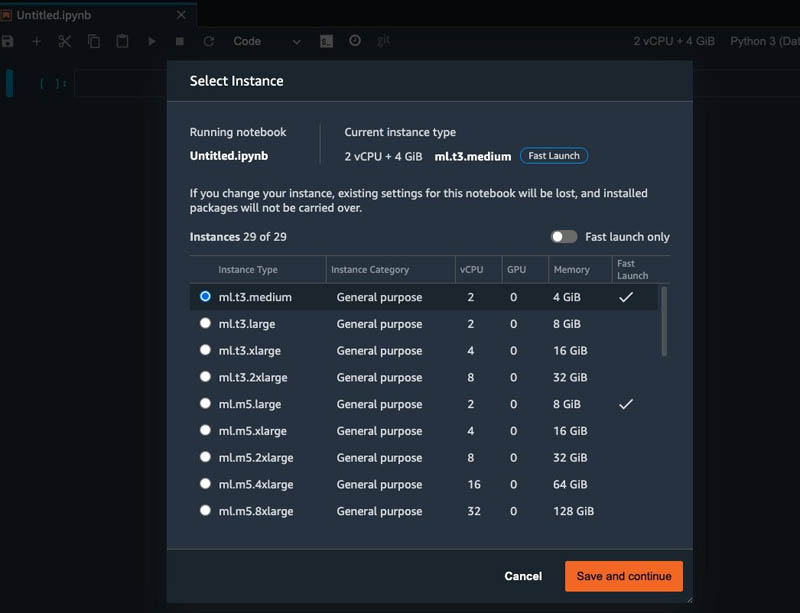 Some instances are of fast launch type, whereas some are not. The fast launch types are simply pooled to offer a fast start experience. You can also check Amazon SageMaker Pricing to learn about all the different instance types supported by Studio.

Also, as shown in the architecture diagram, a shared Amazon EFS volume is mounted to all KernelGateway and JupyterServer apps.

Besides using notebooks and interactively running code in notebook cells with kernels, you can also establish terminal sessions with both the JupyterServer app (system terminal) and KernelGateway apps (image terminal). The former might be useful when installing notebook server extensions or running file system operations. You can use the latter for installing specific libraries in the container or running scripts from the command line.

The following screenshot shows a terminal session running on a KernelGateway app with a Python3 (Data Science) kernel running on an ml.t3.medium instance.

From a storage perspective, each user gets their own private home directories created on an Amazon EFS volume under the domain. For each user, Studio automatically associates a unique POSIX user/group ID (UID/GID) to make sure they can access only their home directories on the file system. The file system is automatically mounted to the notebook server container and to all kernel gateway containers, as seen in the previous section.

Studio’s Amazon EFS file system can also be mounted by different clients: for example, you can mount the file system to an EC2 instance and run vulnerability scans over the home directories. The following screenshot shows the describe-domain API call, which returns details about the Amazon EFS ID mounted (highlighted). 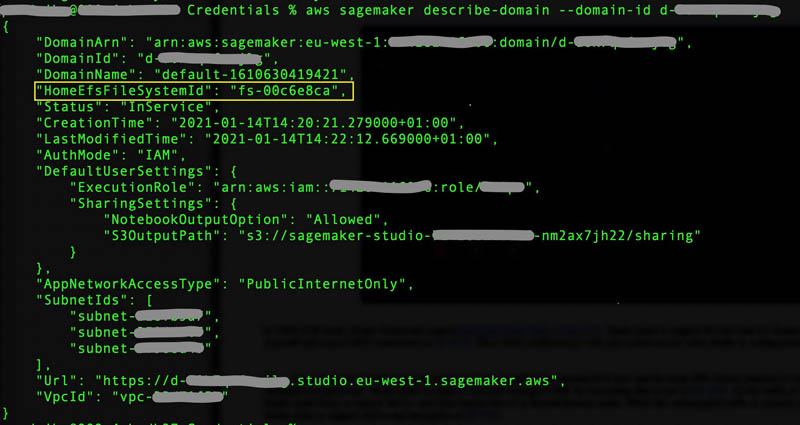 You can use AWS Key Management Services (AWS KMS) to encrypt the S3 buckets, and use KMS customer managed keys (CMKs) to encrypt both Amazon EFS and EBS volumes. For more information, see Protect Data at Rest Using Encryption.

Studio, be default, uses two different Amazon Virtual Private Clouds (Amazon VPCs), where one VPC is controlled by Studio itself and is open for public internet traffic. The other VPC is specified by the user, and enables encrypted traffic between the Studio domain and the Amazon EFS volume. For more details, see Securing Amazon SageMaker Studio connectivity using a private VPC.

Studio uses run-as POSIX user/group to manage the JupyterServer app and KernelGateWay app. The JupyterServer app user is run as sagemaker-user, which has sudo permission to enable installation of yum packages, whereas the KernelGateway app user is run as root and can perform pip/conda installs, but neither can access the host instance. Apart from the default run-as user, the user inside the container is mapped to a non-privileged user ID range on the notebook instances. This is to ensure that the user can’t escalate privileges to come out of the container and perform any restricted operations in the EC2 instance. For more details, check out Access control and SageMaker Studio notebooks.

In addition, SageMaker adds specific route rules to block requests to Amazon EFS and the instance metadata service (IMDS) from the container, and users can’t change these rules. All the inter-network traffic in Studio is TLS 1.2 encrypted, barring some intra-node traffic like communication between nodes in a distributed training or processing job and communication between a service control plane and training instances. For more details, check out Protecting Data in Transit with Encryption.

Studio is available at no additional charge to customers. You pay for both compute and storage when you use Studio notebooks. See Amazon SageMaker Pricing for charges by compute instance type. Your notebooks and associated artifacts such as data files and scripts are persisted on Amazon EFS. See Amazon EFS Pricing for storage charges. As part of the AWS Free Tier, you can get started with Studio notebooks for free.

For example, in a Studio domain, when a user is added, a JupyterServer app is launched for the user, which renders the Studio UI in the browser. This JupyterServer app isn’t charged to the user, and they’re only charged for underlying Amazon EFS storage. The user can continue to use the Studio UI for file browsing, reading notebooks, and accessing the system terminal and other UI components in Studio without incurring any compute costs. The user only starts getting billed for compute when they select a kernel for working with a notebook.

When the user shuts down the last running KernelGateway app on an EC2 instance, the instance automatically shuts down and billing stops for the EC2 instance. So users are advised to shut down any unused KernelGateway apps to avoid incurring unintended charges. You can also automate shutting down idle kernels by using the Sagemaker-Studio-Autoshutdown extension.

After reading the previous sections, you might have already identified most of the benefits of using Studio notebooks. But let’s do a quick recap:

In this post, we dived deeper in Studio notebooks, explaining its inner workings, which will help you make an informed decision when choosing Studio as the IDE to manage your ML lifecycle. We learned that Studio notebooks use the loosely coupled KernelGateway architectural pattern to achieve scalability and flexibility, and provide great isolation capability for each user working in the same Studio domain. Security controls are also in place to avoid any unintended actions from the users.

As a next step, we encourage you to try out Studio to manage your ML lifecycle. For more information on how Studio works, see Get Started with Amazon SageMaker.

Giuseppe Angelo Porcelli is a Principal Machine Learning Specialist Solutions Architect for Amazon Web Services. With several years software engineering an ML background, he works with customers of any size to deeply understand their business and technical needs and design AI and Machine Learning solutions that make the best use of the AWS Cloud and the Amazon Machine Learning stack. He has worked on projects in different domains, including MLOps, Computer Vision, NLP, and involving a broad set of AWS services. In his free time, Giuseppe enjoys playing football.