In our second installment of Edit in the Cloud series, we covered getting started with virtual workstations powered by Amazon Elastic Compute Cloud (Amazon EC2)—a web service that provides secure, resizable compute capacity in the cloud—to meet the needs of creative workloads (for example, Blackmagic Design’s DaVinci Resolve) for media and entertainment (M&E).

In this post, you will learn how to take that initial deployment from test to production by introducing scaling automation, security, and cost management techniques. To do this, we will add two components to the environment—a connection broker to manage and control access to virtual workstations and a gateway to securely provide access to private workstations from the public internet (Figure 2).

A connection broker is a control plane that provides remote access to your virtual workstation environment and management of the workstations, the users who access them, and the connection methods. A broker can have policies or rules that do the following:

Each broker in the Leostream cluster is deployed to separate Availability Zones so that workstation connections can continue to be made if there is an issue in a single Availability Zone (Figure 1). The cluster instances are deployed in an Auto Scaling group of Amazon EC2 Auto Scaling—which lets users add or remove compute capacity to meet changes in demand—so that should an instance fail, a new one will launch to replace it (Figure 1). The database, which is deployed as an Amazon Aurora for PostgreSQL database cluster, and the Application Load Balancer (ALB) span Availability Zones (Figure 1). Aurora is a MySQL- and PostgreSQL-compatible relational database built for the cloud, and ALB provides advanced request routing targeted at delivery of modern application architectures. 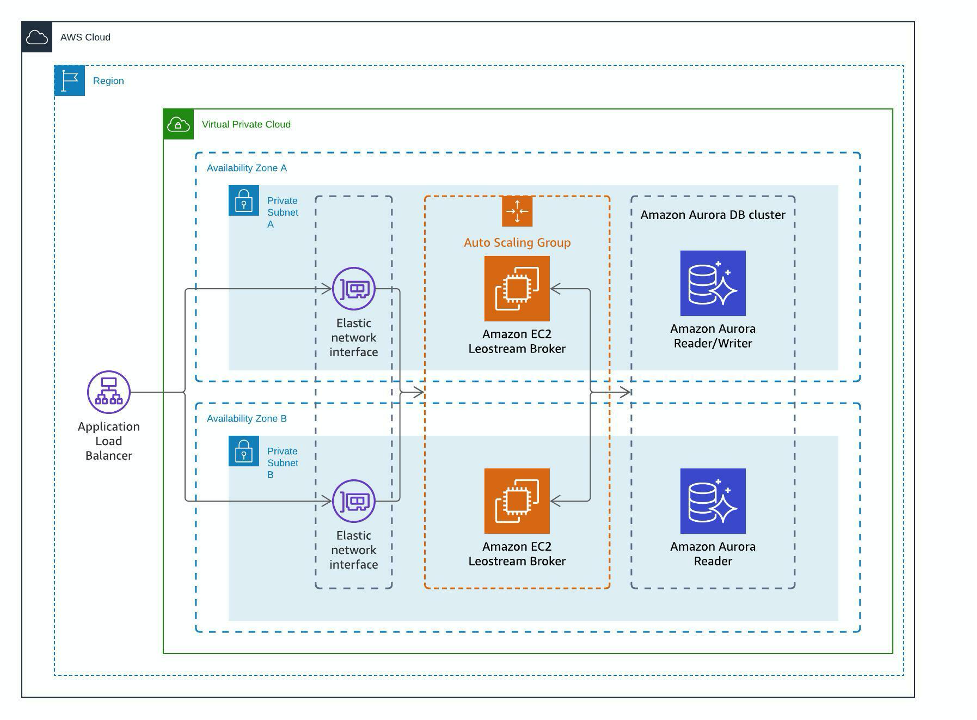 The Leostream Gateway is software that runs on Amazon EC2 instances. In a well-architected production deployment, the gateway instances are deployed in a load-balanced, multi-AZ, and automatically scaled configuration (Figure 2). The gateway provides access to remote users connecting from the public internet, and it is deployed to public subnets, which have a route to the internet (Figure 2). 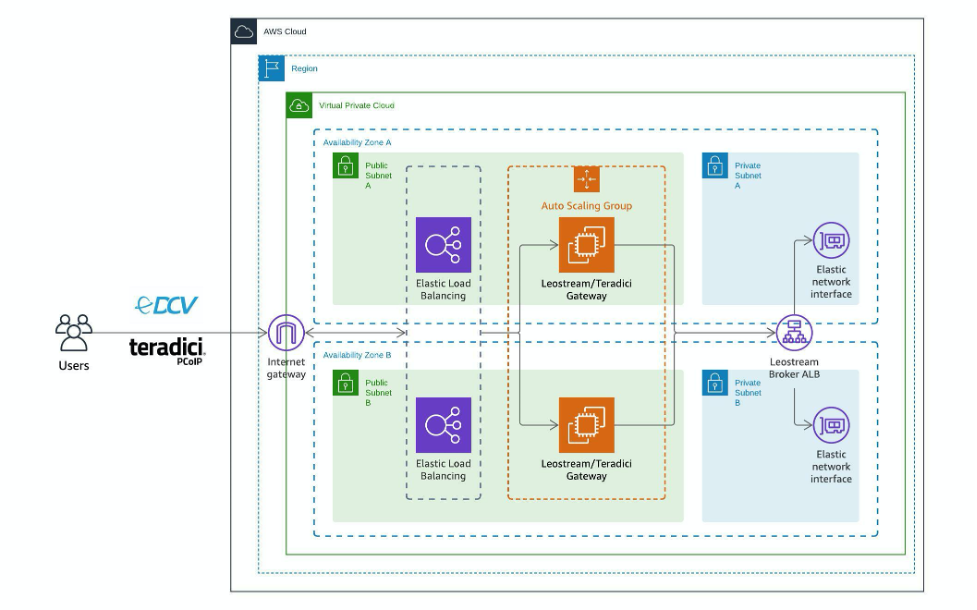 When you launch tens to hundreds (or more) Amazon EC2 instances manually—whether you do so in the AWS Management Console or using infrastructure-as-code (IAC) tools like AWS CloudFormation (which lets you model, provision, and manage AWS and third-party resources by treating infrastructure as code), you’ll find that this process does not scale well for user workstations that must be dynamically deployed based on demand.

The first step to securing virtual workstations is removing them from direct access to the public internet and deploying them to private subnets. Placing workstations in a public subnet is convenient for testing and proofs of concept, but this configuration presents a potential security risk. If security groups are not managed properly, workstations can be accessed by bad actors. Although deploying workstations in a private subnet removes them from direct inbound internet access, internet access for tasks such as web browsing and checking email is provided using a public Network Address Translation (NAT) gateway (Figure 4).

Deploying workstations to a private subnet reduces the potential attack surface of the environment to the gateway load balancer. Workstations are further protected by a security group that only permits protocol traffic that originates from the gateways.

The Leostream Connection Broker user interface lets administrators manage what workstations authenticated users are authorized to use. For example, editors might be given access to high-powered GPU-based Amazon EC2 G4 instances (cost-effective GPU instances for machine learning inference and graphics-intensive applications) with assistant editors only given access to lower-powered, lower-cost instances to perform their less-graphics-intensive work.

For users who are comfortable with deploying their own infrastructure, Leostream has both Leostream Connection Broker and Leostream Gateway AMIs available from the AWS Marketplace, a sales channel where you can find, buy, deploy, and manage software solutions. If you are using Teradici PCoIP, the Teradici Connection Manager and Security Gateway must be installed on an Amazon EC2 instance as described in Teradici’s installation guide.

AWS CloudFormation templates for quickly deploying the infrastructure discussed in this article will be released in a subsequent post.

In this post, we described how to add enterprise scale, security, and cost savings to Amazon EC2 workstations using a broker and gateway. Although many customers might be comfortable deploying infrastructure on their own, we realize some might be new to the cloud. Dedicated M&E experts at AWS can provide prescriptive guidance and necessary resources to optimize your cloud production. Click here to connect to our team.