Many customers that I work with are creating and provisioning new accounts using AWS Control Tower. They prefer an AWS native solution for creating their environment knowing that it will be based upon documented AWS Best Practices. As customers scale their account creation, there exists an opportunity to use additional Control Tower features to perform further account enhancements.

I refer to the following services in this post:

AWS Control Tower uses several AWS services including AWS Organizations, AWS IAM, AWS Config, AWS CloudTrail, and AWS Service Catalog to build a well-architected multi-account AWS environment. As a result, when Control Tower takes an action, such as enabling a guardrail on accounts in an organizational unit (OU), it executes many processing steps and numerous API calls to these services 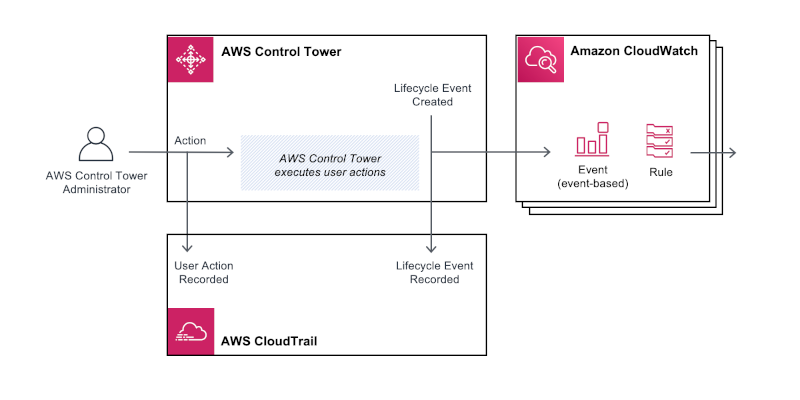 Control Tower creates lifecycle events at the completion of the following actions:

Lifecycle events are created internally by Control Tower and recorded in CloudTrail as AWS Service Events (eventType = AwsServiceEvent). You can identify lifecycle events on the CloudTrail Event history page as events that have Source IP address as AWS Internal, and Event source as controltower.amazonaws.com.

Example: Enabling a guardrail on an OU

I go to the CloudTrail console, and I note that CloudTrail recorded two related events, both with the Event name as EnableGuardrail, as seen in the following screenshot.

The first EnableGuardrail event lists my User name and my Source IP address. This event is the record of my action of enabling the guardrail.

The second EnableGuardrail event lists the Source IP address as AWS Internal. This event is the lifecycle event that corresponds to my action of enabling the guardrail.

I view the log entries for both EnableGuardrail events to understand how they are recorded differently by CloudTrail.

In the extract from the log entry of the first EnableGuardrail event, I note that CloudTrail recorded the event type as AwsApiCall, as seen in the following screenshot. This indicates that I, the user, initiated an action that resulted in an AWS API call.

In the extract from the log entry of the second EnableGuardrail event, I note that CloudTrail recorded the event type as AwsServiceEvent, as seen in the following screenshot. This indicates that an AWS service, in this case, Control Tower, created this event, the EnableGuardrail lifecycle event.

I use Control Tower’s Account Factory (via AWS Service Catalog) to create and provision a new account, called my-custom-account-2, and to place it in the OU, My-Custom-OU, that I previously created.

I return to the CloudTrail console to view a subset of the events that it recorded. I see that CloudTrail recorded my action of creating an account using Account Factory with the event name CreateManagedAccount, as seen in the following screenshot. 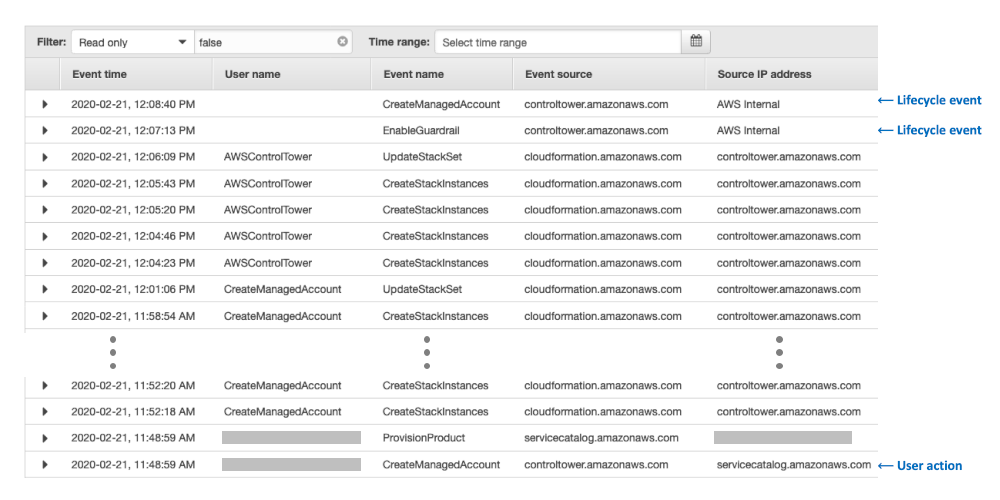 Over the next few minutes, Control Tower makes numerous API calls to other services to create and provision the new account, my-custom-account-2. Finally, I note that CloudTrail records two lifecycle events, as seen in the above screenshot.

The first lifecycle event, named EnableGuardrail, tells me that Control Tower completed deploying the guardrail that I had previously enabled on My-Custom-OU on the newly created account. The second lifecycle event, named CreateManagedAccount, tells me that Control Tower has completed all actions related to creating and provisioning the new account.

As described, I can use lifecycle events to track if my Control Tower action completed successfully or not. 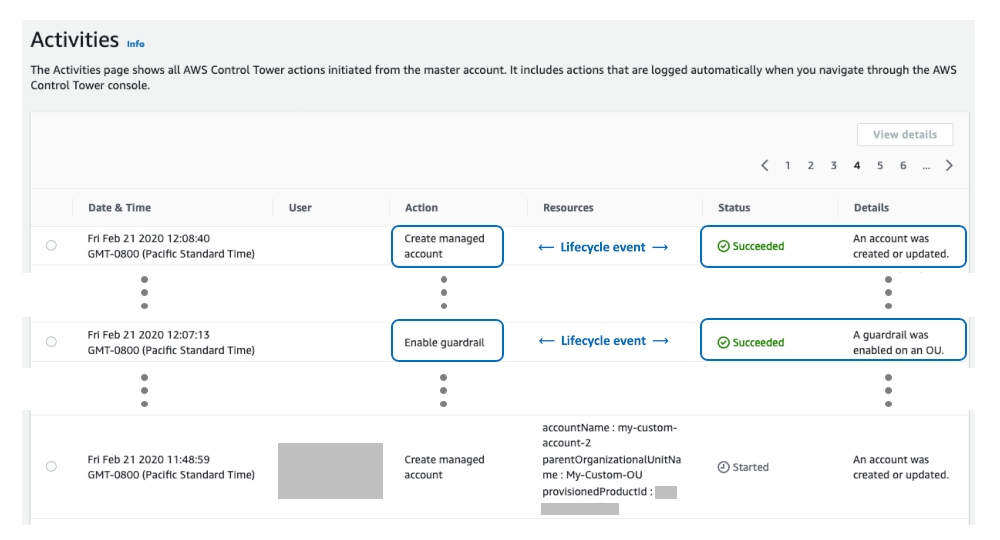 To demonstrate how lifecycle events can be used to launch additional, automated workflows, I demonstrate an example where I automatically inform the InfoSec team whenever I use Account Factory to create an account.

I return to the Control Tower console. I use Account Factory to create a new account, my-custom-account-3, and to place it in the OU, My-Custom-OU, that I created previously. After a few minutes, the resulting lifecycle event log finds its way to the InfoSec team’s inbox, as seen in the following screenshot. 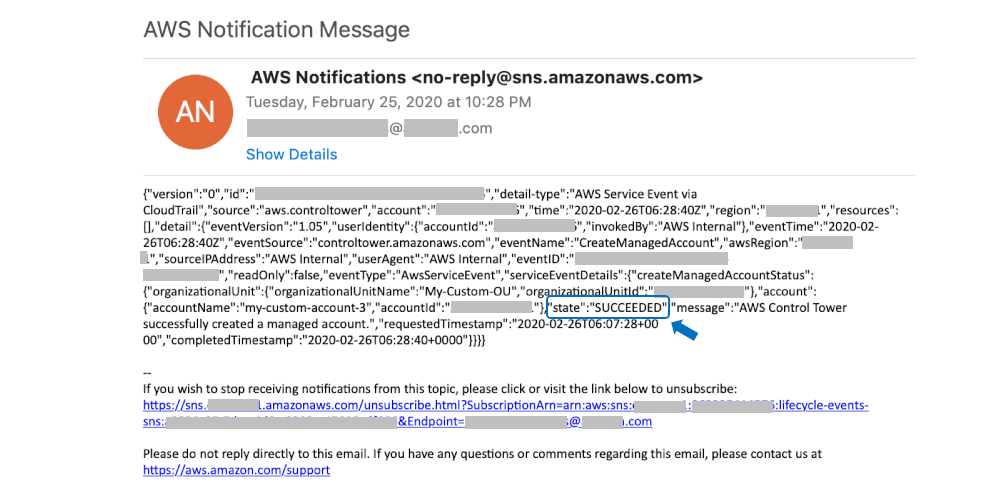 At this point, the InfoSec team knows that an account was successfully created and provisioned by Control Tower, and they also know the new account’s ID and the OU where it was placed. Since CloudWatch Events supports multiple targets, I can configure the CWE-rule-lifecycle-event-account rule such that it simultaneously launches AWS Lambda or AWS CodePipeline to further provision this newly created account with additional custom resource configurations.

I consider another advantage of using lifecycle events with CloudWatch Events to be the visibility that it gives me into Control Tower actions that may have failed.

To illustrate this point, I create a new OU using Control Tower, My-Custom-OU-3. I configure Account Factory to create a new account, my-custom-account-7, and to place this account in the new OU. I launch the account creation process, but immediately delete My-Custom-OU-3 from the Organizations console so that I can cause the account creation and provisioning process to fail.

Sure enough, a few minutes later, the InfoSec team receives an email informing them that Control Tower was not successful in creating and provisioning the account my-custom-account-7, as shown in the following screenshot. The InfoSec can then investigate why this happened. If the InfoSec team relies solely on the CloudTrail logs of the originating user actions, they cannot know if the subtasks associated with my user action completed successfully, and they cannot respond in a timely and appropriate manner. 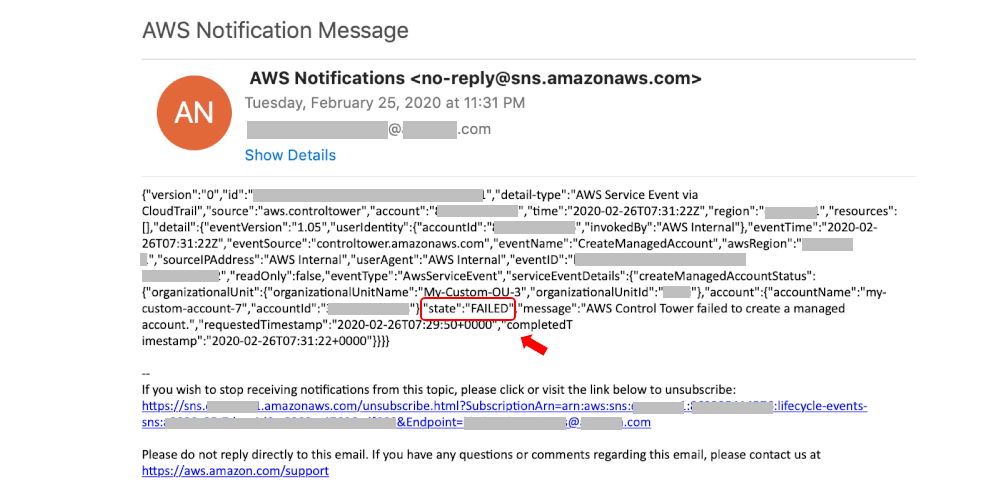