While migrating to a cloud-based data warehouse, one of the most important goals is to move away from database-stored procedures and create a modular architecture by decoupling code from data persistence components.

The business logic that traditionally resided within the database can then be implemented outside of the database and managed independently. Usually, the stored procedures contain business logic to implement the extract, transform, and load (ETL) processes for incremental data processing.

It’s very important that active business processes not be disrupted due to technology migration. Converting database-stored procedures to Python scripts is essentially a manual activity. Manual conversion of code from a proprietary language is extremely effort intensive and error prone.

In this post, we discuss how Cognizant’s Intelligent Migration Workbench (IMW) can be used to accelerate data warehouse migrations while converting Oracle PL/SQL and Tetradata BTEQ scripts.

Cognizant AI Data Modernization Method (AI-DM) proposes a reference model that customers can use to reimagine their data and analytics foundation using a set of attributes that redefine their data ecosystem in a structured way.

These tools help customers build a modern data ecosystem based on the principles of AI-DM.

The end-to-end process of migrating from an on-premises database or data warehouse to the Amazon Web Services (AWS) Cloud comprises several tasks. Some are concerned with re-factoring upstream and downstream processes for data ingestion and consumption, while others are specific for migrating data from the source data warehouse system to Amazon Redshift.

IMW focuses on one specific task from the list below:

IMW delivers automation through machine-driven conversion of code from proprietary dialects such as Teradata BTEQ and Oracle PL/SQL to PySpark, thereby freeing the business logic locked in proprietary languages.

The refactored code can run on fully managed ETL services, such as AWS Glue, that provide customers the flexibility to manage the code execution environment.

The diagram below shows the high-level internal process flow of IMW. 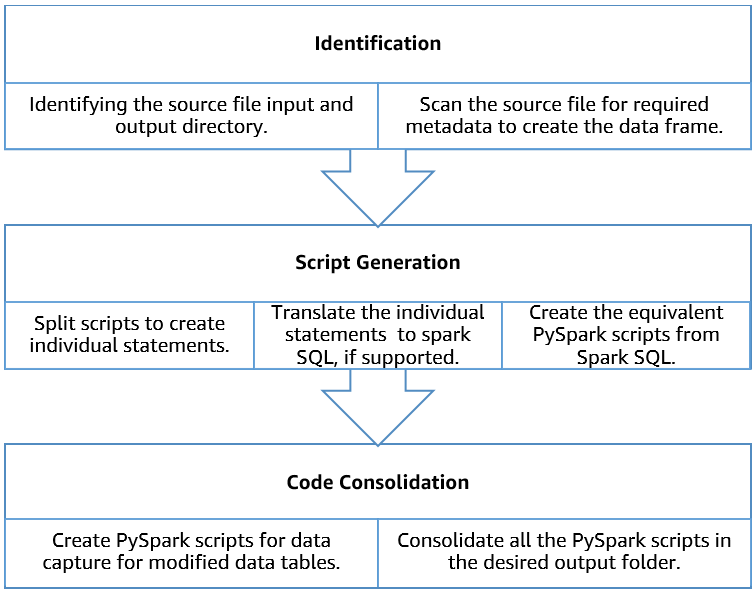 How to Use IMW

For effective use of IMW, we recommend the following sequence of tasks:

The next step is extracting the identified code, either BTEQ scripts or Oracle PL/SQL code, into files and placing them in a common storage repository. This location is configured in IMW as the source code location.

The conversion step is where IMW analyzes the BTEQ or PL/SQL scripts and generates the corresponding PySpark code. During this conversion, the converter takes care of semantic conversion of logical constructs in the database code to corresponding Python code.

The SQL statements are converted into Spark SQL, and IMW also takes care of converting native database functions in Teradata or Oracle to their corresponding PySpark equivalents. The output is not just a lexical translation but a logical replication of the business logic contained in the source code.

The screenshots below illustrate how source code is uploaded to IMW through the web user interface. Form there, the converted code is made available for download.

IMW supports conversion of scripts from variety of sources like Oracle PL/SQL, Teradata BTEQ scripts, and PySpark scripts that can be executed on AWS Glue or Amazon EMR.

Figure 2 – Selecting the source and target in IMW.

Once the selected scripts are converted to the target format (PySpark), you can download the converted scripts.

As a first step, the PySpark code generated by IMW is unit-tested using a Jupyter notebook, followed by system integration testing.

The system integration testing needs to be automated, as it could involve multiple complex and error prone steps like running the existing ETL process on a source dataset, which refreshes a target database.

The next task is to run the newly-generated PySpark code on the same source dataset to load or refresh a different target database. Finally, the results from the corresponding tables of the two target databases are compared to validate if the new PySpark code produces same results as existing ETL.

For automating the system integration testing for IMW code conversion, Cognizant leverages Jupiter, a component of AI-DM. Jupiter is a continuous data testing accelerator enabling data test automation and quality engineering at scale by aligning to a DevOps delivery mode.

The Jupiter solution is available via AWS Quick Start >>

Once the PySpark scripts are ready, they are executed through AWS Glue or as Spark jobs on Amazon EMR.

The following diagram depicts how IMW is deployed and leverages native AWS services like AWS Glue to run ETL jobs.

Benefits of IMW for Customers

Some of the key benefits of IMW are:

Organizations have realized they need to move data assets and associated processes to the cloud as soon as possible to remain competitive in this digital era.