Migrating legacy workloads to the cloud can be complex. In an ideal world, legacy applications are rearchitected to fully realize the benefits of cloud. However, this is neither practical nor feasible in every case.

Some customers have a business need to migrate their legacy systems to cloud very quickly, such as a data center contract expiry.

These customers may not have the luxury of time to rearchitect before migrating to the cloud. Or, the developers with the application knowledge may no longer be around to pull off a complex refactoring exercise. In the case of COTS software, there is an added limitation of unavailability of source code.

The Accenture AWS Business Group (AABG) has vast experience in migrating workloads to Amazon Web Services (AWS). Through years of working with diverse customers in this space, AABG notes that while the rehosting approach has allowed some customers to experience a quicker migration to cloud with initial CAPEX and OPEX savings, it does not provide the right optimization for operating in a cloud environment.

AABG sees containerization emerging as a pertinent solution, allowing customers to quickly migrate and modernize their legacy systems to the cloud with minimal code changes. Containers are also a popular choice for developing new applications that are based on microservices architecture.

Containerization can thus accomplish commonality between the old and new applications, and eliminate operational overheads of having to maintain different sets of tooling for their automation and CI/CD.

While containerizing legacy systems enables these benefits, it also involves a series of tasks. This includes application assessments to gather data required for containerization, identification of dependencies, creating the Dockerfile, and setting up the build and deployment process for the applications.

These tasks tend to be time-consuming, error prone, and can slow down modernization efforts. Furthermore, this needs skills in container technology and considerable investments in terms of time and efforts.

AABG explored AWS App2Container (A2C) for containerizing customer workloads to AWS Cloud. In this post, we share our experience of how A2C can accelerate this journey by eliminating the manual tasks and simplifying the technical complexity involved in containerizing legacy systems.

We also discuss how this results in productivity gains and reduced engineering costs.

A2C can containerize both Java and .NET legacy applications running on a virtual machine (VM) or physical server on-premises, in Amazon Elastic Compute Cloud (Amazon EC2) instances, or in any other cloud.

Figure 1 shows the sequence of steps in A2C, with the output of each being leveraged as the inputs to the subsequent steps in the sequence. 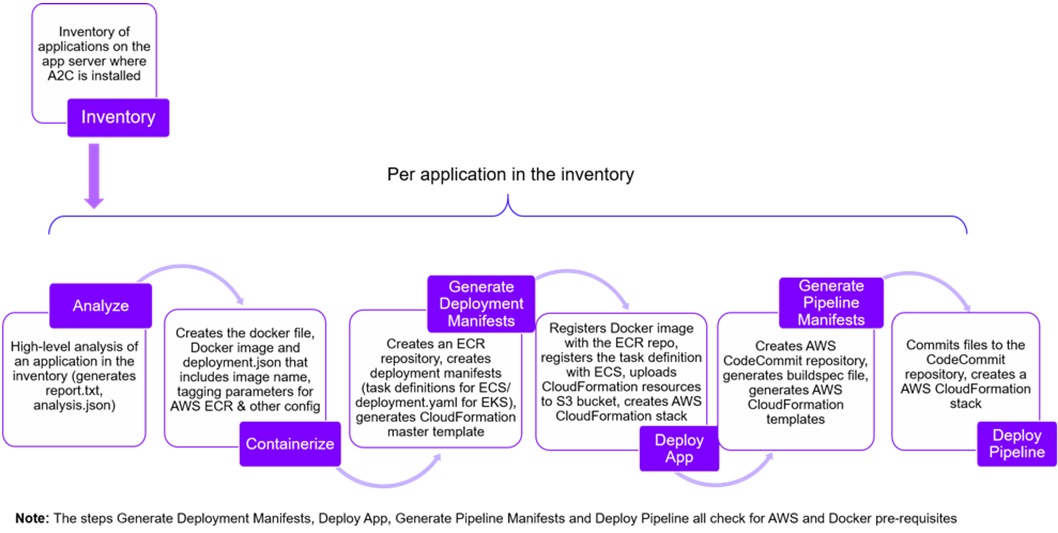 AABG has piloted use of A2C across multiple customers. The sample scenario detailed in this section is a composite mix of these use cases to depict how A2C can help with migrating an entire portfolio of legacy applications to AWS in an accelerated manner.

The application landscape being migrated in this scenario is diverse:

Migrating to containers helps ensure a consistent strategy and target state across this heterogeneous stack, as shown in Figure 2.

In this section, we provide a detailed description of the steps for migrating the sample scenario described above.

A2C automatically identified all candidate processes and listed them in a JSON format.

For each application identified in the inventory, A2C’s analysis step generated detailed information and analysis output in a JSON format, which A2C leverages to containerize the application in subsequent steps.

The section below describes three important aspects of the generated analysis output:

In the following screenshot, the application in question (with processId 3139) is shown as dependent on a second application that is assigned processId of 1376 in A2C analysis. 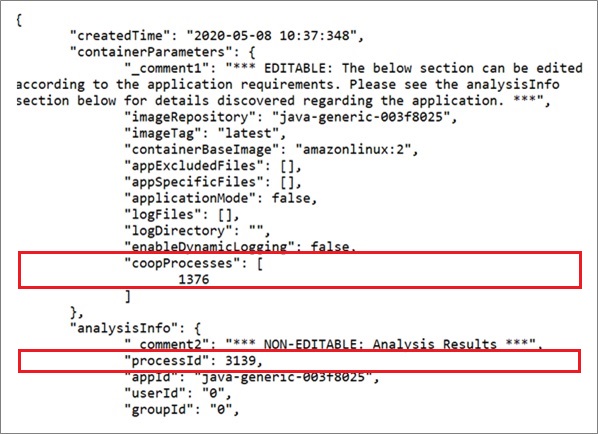 This analysis.json file also includes a section detailing the dependency found, such as the port used for connectivity, as well as other access parameters. A2C uses this information in subsequent steps to ensure these dependencies are factored into the generated containers.

Figure 4 – Sample analysis.json with details of the dependency.

Three important value-adds of A2C in this phase:

Step 4: Automated Creation of the Entire Stack on AWS

In addition, it generated the Amazon ECS task definition and registered the task to run on the created ECS cluster. It then used the Docker images created earlier to launch the applications into ECS as containers.

Our scenario used Amazon ECS, but A2C also auto-generated the Amazon EKS deployment manifests if EKS were to be used instead. In addition, it makes these generated manifests available for any edits needed. For instance, we used AWS Fargate for our use case as the ECS launch type. If we needed to use an Amazon EC2 launch type instead, we could accomplish this easily by simply editing these manifests.

A2C also created an AWS CodeCommit repository for each application, and auto-uploaded all generated CI/CD artifacts and manifests to this repository to allow these to be reused as needed if the application is changed in future.

In addition, it created an AWS CodeBuild project to automate the build for such future changes. Finally, it also created the CI/CD pipeline (AWS CodePipeline) for the application. For scenarios where a CI/CD tool other than AWS CodePipeline is used, the artifacts are available to be integrated as needed into any DevOps pipelines.

The diagram in Figure 6 shows how the entire AWS stack was auto-created by AWS App2Container. 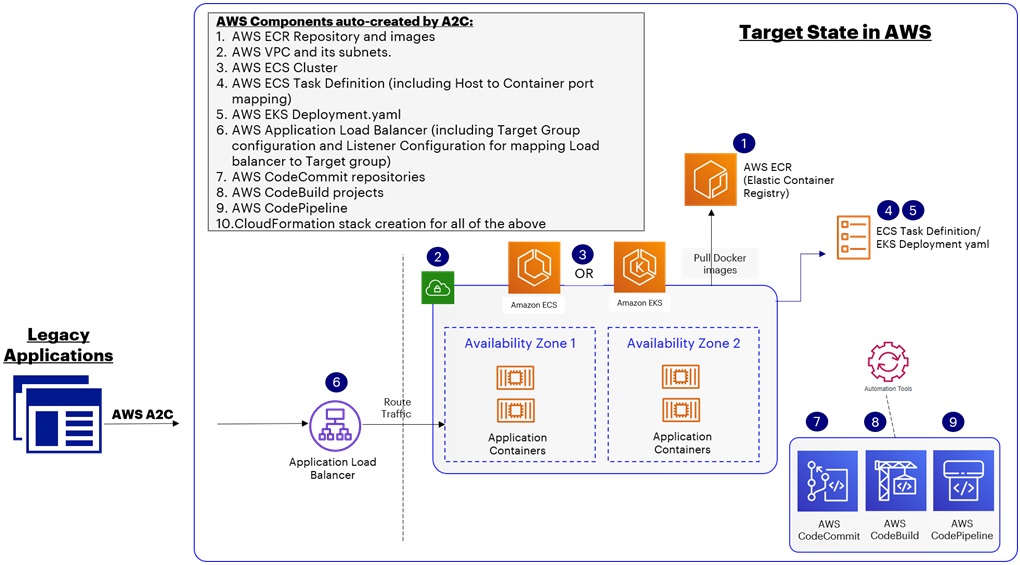 The automation enabled by A2C results in relatively shorter and accelerated migration cycles for customers, which in turn enables productivity and cost savings across multiple lines.

A2C cuts down the migration effort and time as it automates assessment and containerization, and also generates the artifacts needed to deploy the images to AWS. This results in quicker migration cycles to the cloud.

Without A2C, migrating the applications in our representative use case described earlier would have needed separate Java and .NET teams to analyze and understand the existing legacy. It would also need a team with skills in Docker and containerization to create the Docker images for the application, and a mix of people with knowledge of Amazon ECS or Amazon EKS to create several deployment manifests.

With A2C, all of these are automated, which results in cost savings from the reduced migration effort.

The table below highlights the automation enabled by A2C at each step of the migration, and compares it to the effort and skills that would have been needed had these been done manually. 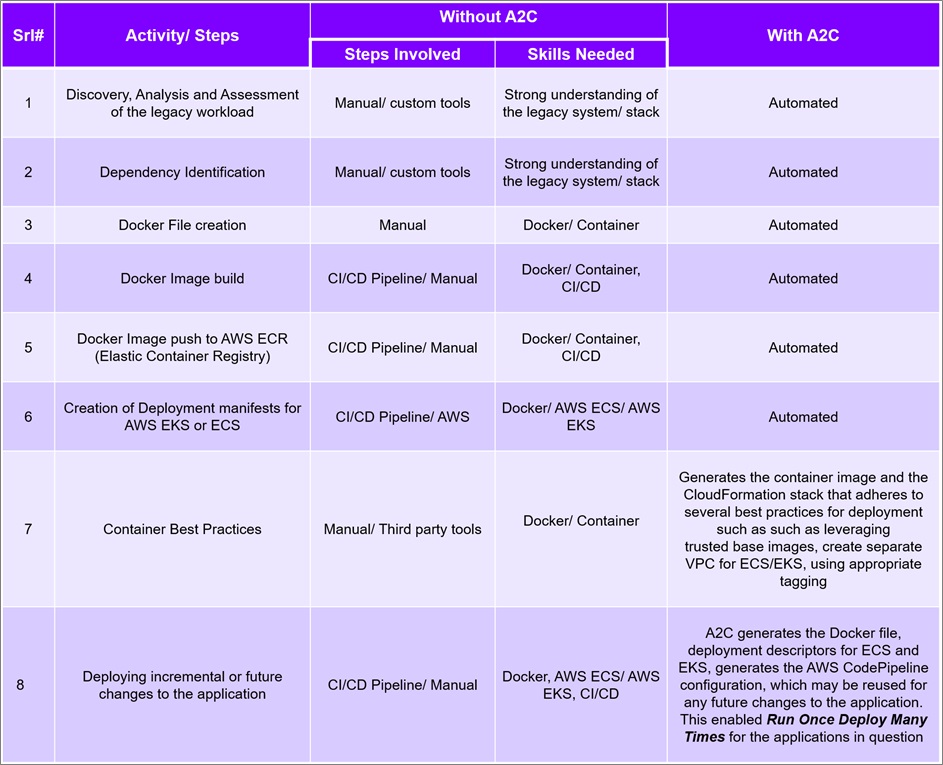 There are several differences in containerizing Linux and Windows platforms. A2C takes care of these platform-specific steps as it auto-generates the Docker images. This allows developers to focus on application development without worrying about routine steps.

Use of A2C is free. AWS only charges for the actual usage of its compute resources and services used, such as Amazon EKS or Amazon ECS.

AWS App2Container (A2C) is an enabler for containerizing and migrating legacy applications to AWS quickly. Its value-add is specifically seen for use cases where the legacy system in question is large with heterogeneous applications, where A2C helps to bring a commonality to the migration approach, tools, and the target state architecture.

While containers have traditionally not been a recommended target state for monoliths, containerizing legacy applications as a cloud migration approach brings in added advantages over rehosting, such as commonalities in automation and abstraction of technical heterogeneity across those applications.

With A2C, customers can quickly containerize their legacy applications and migrate to AWS with minimal remediation and at scale. A2C also enhanced developer productivity due to automation and resulted in overall cost savings.

Once on AWS, customers may then choose to rearchitect any or all of these applications further at their own convenience and pace.

Accenture is an AWS Premier Consulting Partner and MSP. A global professional services company that provides an end-to-end solution to migrate to and manage operations on AWS, Accenture’s staff of 440,000+ includes more than 8,000 trained and 6,000 AWS Certified professionals.

*To review an AWS Partner, you must be an AWS customer that has worked with them directly on a project.