Today’s commercial and defense aircrafts are made up of thousands of parts. The aerospace industry has to function in a tight regulatory environment, which requires the vetting of all parts. These parts can be resold several times throughout the production lifecycle, which makes it challenging to track their history. The traceability of aircraft parts is traditionally a paper-based process. Airlines and other industry participants have to spend a significant amount of time and money to ensure the quality of the aircraft parts supply chain.

In the absence of part-history traceability, the part’s airworthiness must be established through testing and recertification. Sometimes the parts must be replaced because these details aren’t available. The data is spread across and isolated in multiple parties and systems. Intellectual property rights for aircraft parts are owned by multiple parties (for example, customer, OEM, part supplier). Other parties are granted IP use licenses that often do not include data rights. Although those parties might be part of the same ecosystem (manufacturer, suppliers, dismantlers, airline customers, and repair companies), sharing the data can be a challenge because of industry competition. Blockchain’s decentralized, immutable, and consensus-based nature makes it a perfect fit to help overcome these challenges.

Blockchain is a decentralized, transparent, immutable, and auditable data store that keeps a permanent record of all transactions. After a record is written to a blockchain, it cannot be altered. The digital thread will provide real-time status, a chain of custody, and maintenance records of the part over time.

In this blog post, we share industry challenges and an example of how you can use Amazon Managed Blockchain to improve visibility into the history of aircraft parts. The focus of the example we use in this post is on improving the tracking of the part between multiple members during initial repair as part of an operator’s maintenance, repair, and overhaul (MRO) process.

The MRO industry processes 25 billion parts annually, with 20,000 suppliers adding three billion new parts each year. According to information published in Aviationweek.com in February 2020, there is currently no global parts database. Data sharing is incomplete and only partial digitalized. According to information first published in Data for the life of the aircraft, published by PWC in April 2019, blockchain could cut MRO costs globally by around 5% or $3.5 billion.

For aircraft operators and MRO service providers, a blockchain solution:

For operators and lessors, a Blockchain solution:

For suppliers and manufacturers, a blockchain solution:

The following diagram shows how a part goes through the aircraft maintenance lifecycle. The initial component could be acquired through OEMs, parts manufacturer approvals (PMAs), suppliers or traders, or a digital parts marketplace. When the part needs repair and is not serviceable, it ends up in scrap. The operator might have a contractual agreement with an engine OEM or other third parties for the maintenance and overhaul of the parts. Some of these parts require overhaul after a certain number of flying hours. The operator might get the same exact part or a different overhauled part. 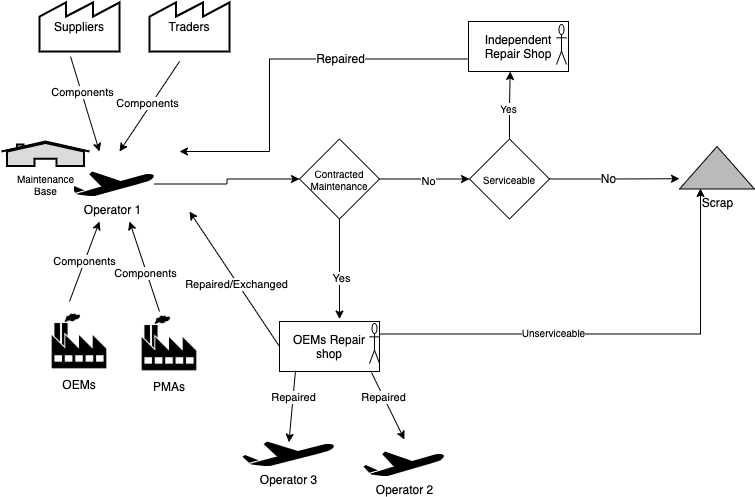 Keeping track of the origin of a part and its maintenance and overhaul history improves airworthiness and reduces the inspection and testing. It also prevents counterfeit parts.

Parts traceability requires a decentralized multi-member network that allows each member (supplier, operator, dismantler, manufacturer) to update information independently. A Hyperledger Fabric network on Amazon Managed Blockchain remains active as long as there is a single member. The network is deleted only when the last member leaves the network. No member or AWS account, even the creator’s AWS account, can delete the network until they are the last member and leave the network.

Let’s walk through how the blockchain solution would work for a single part in a single repair cycle. In this example, the following members work together as part of an alliance:

Supplier 1: The operator sources components from this supplier.

Logistics (Couriers 1 and 2): The parties responsible for delivering the component to its destination. Sometimes multiple couriers are involved.

Operator 1: The airline that operates aircraft to transport passengers, cargo, and so on. Sometimes the operator also outsources the maintenance activity to third parties (for example, OEMs, MRO service providers).

As part of its initial delivery to the operator, the part is inspected and fitted to the aircraft for service. After some use, a fault occurs and the part needs repair. The blockchain already has part information from the manufacturer and other details from the supplier. Members can use the part usage information in different attributes:

Step 1: Operator 1 raises a work order (WO) in the MRO system for the defect and removes the part from the aircraft. Courier 2 receives a notification to pick up the part.

Step 2: Courier 2 picks up the part and delivers it to the manufacturer’s repair shop. Manufacturer 1 receives a notification.

Step 3: Manufacturer 1 works on the WO and after the part is repaired, informs the courier to pick it up. Courier 2 receives a notification.

Step 4: Courier 2 delivers the part to operator 1’s base.

Step 5: Operator 1 validates the part and performs a compliance check, if required. The part is fitted on the aircraft, if needed. Otherwise, it might be sent to the warehouse to be used later. 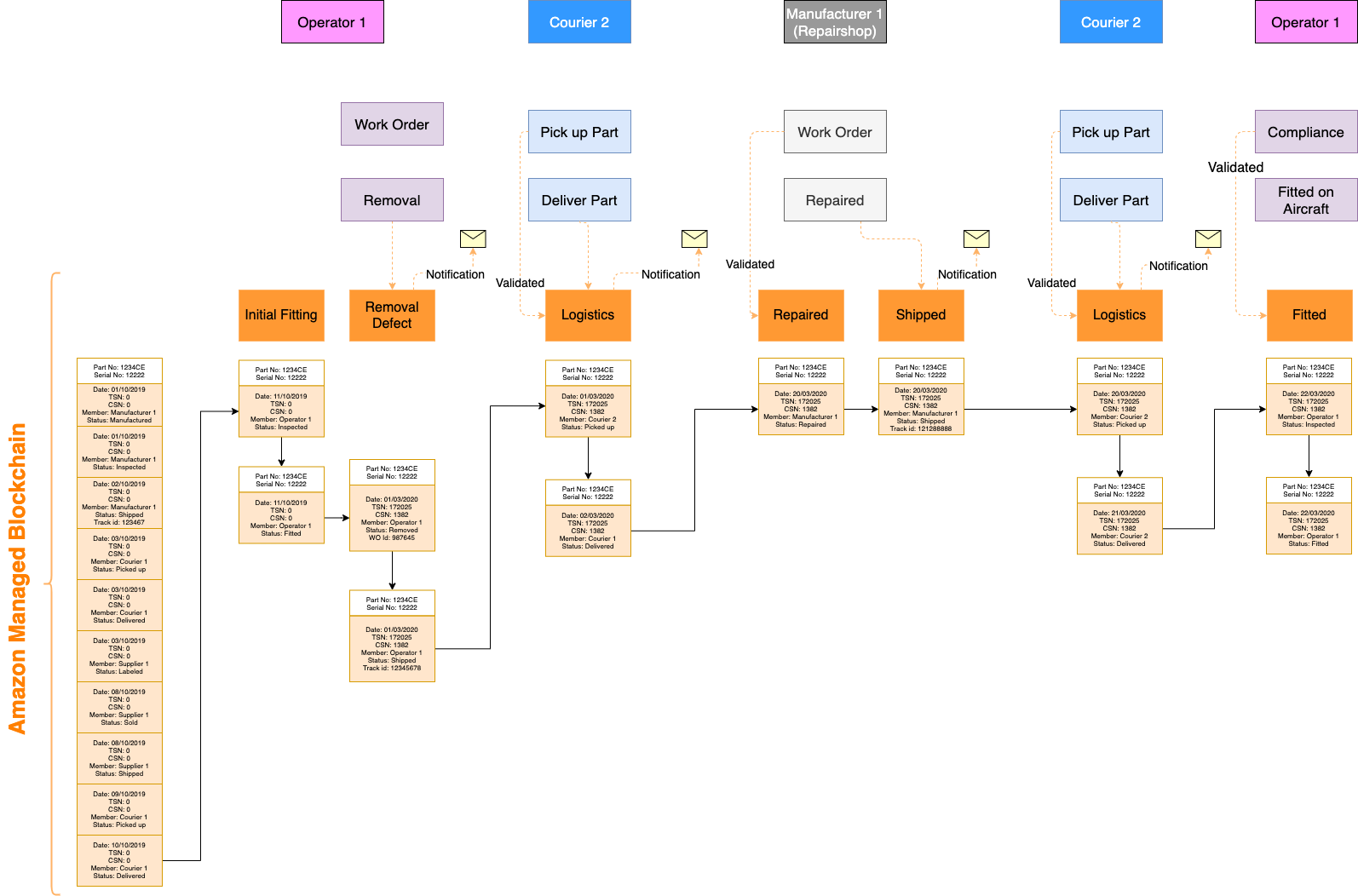 Now, let’s look at the architecture. Amazon Managed Blockchain is a fully managed service that allows you to or set up and manage scalable private networks with just a few clicks using the popular open source frameworks, Hyperledger Fabric or Ethereum. Amazon Managed Blockchain eliminates the overhead required to create the network or join a public network. It scales to meet the demands of thousands of applications running millions of transactions. The service removes the burden of provisioning hardware, installing software, managing certificates for access control, and configuring network settings. After your network is up and running, Amazon Managed Blockchain makes it easy to manage and maintain. It manages your certificates and lets you easily invite new members to join the network.

Hyperledger Fabric is designed for applications that require stringent privacy and permission controls with a known set of members. It can be used for aircraft parts provenance.

The following diagram shows the basic components of a Hyperledger Fabric blockchain running on Amazon Managed Blockchain with five members: 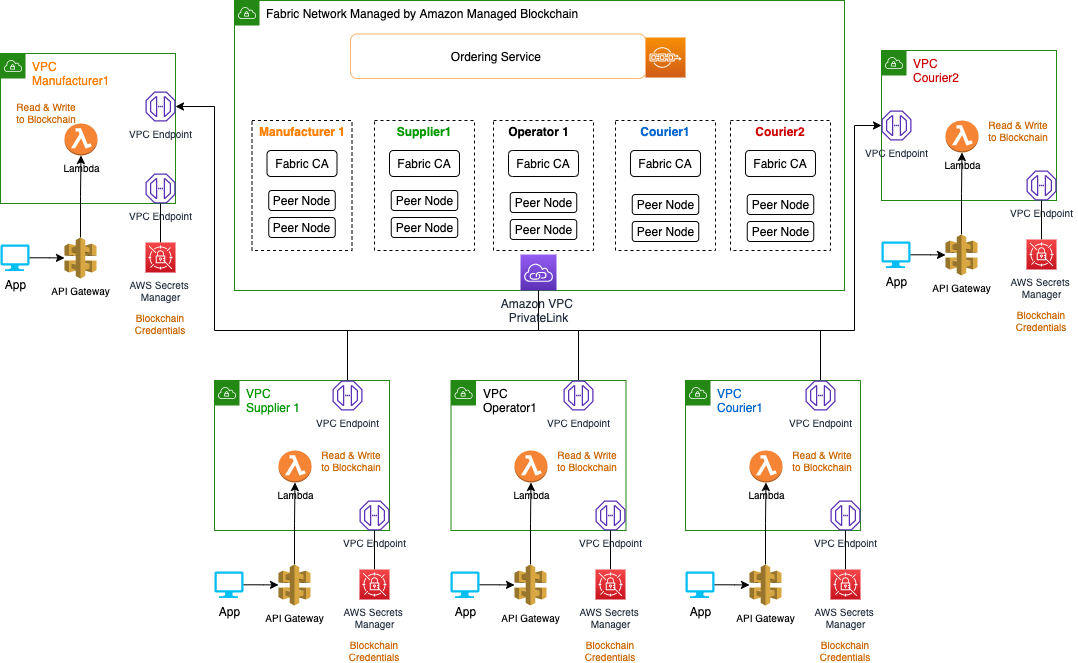 Some business processes like compliance inspection or notifying the courier to pick up parts could be triggered by business events to increase communication and automation between different members. Blockchain events allow applications to respond to activity and updates to the smart contracts that have been deployed to the network, as well as updates to the blockchain network, such as the creation of a new block. These events can enable a diverse set of activities (for example, user notifications through Amazon Simple Notification Service (Amazon SNS) when a business event happens, or streaming data to business intelligence and analytics engines such as Amazon QuickSight or Amazon Redshift). You can also stream to purpose-built databases such as Amazon DynamoDB or Amazon Aurora, or use AWS Lambda for event-triggered applications. For more information, see the Building an event-based application with Amazon Managed Blockchain blog post.

OEMs can enrich this tracking data by linking it to the supply chain process of the parts tracking. For more information, see Blockchain for Supply Chain: Track and Trace and the AerLink is digitally transforming the aircraft leasing and financing industry using Amazon Managed Blockchain blog post.

Growing blockchain network membership: When aircraft parts are tracked through the blockchain network, the parts have a verifiable provenance, which provides benefits to the alliance and its members. The key members (manufacturers, suppliers, operators, repair shops) need to join the network. The network should have a working group to define data and API standards, agree on endorsement policies, and costing model for new members. This helps to increase the understanding of the operating model and make it easier for members to join the network. The MRO system could also be fully integrated with the blockchain system using standard APIs. This would allow operators and other MRO service providers to easily adopt the blockchain solution and take advantage of its benefits.

Governance: A private permissions-based blockchain still requires governance and operational oversight. Distributed and decentralized does not mean self-managing. Hyperledger Fabric enables secure interactions among a set of known, identified participants who have a common goal, but do not fully trust each other. It is important to choose a governance model or organization that does not compromise the integrity of the blockchain. By relying on the identities of peers, a permissioned blockchain like Hyperledger Fabric relies on deterministic consensus algorithms. Any block validated by the peer is guaranteed to be final and correct.

The travel and aerospace industry needs a one-stop view of aircraft parts provenance. Amazon Managed Blockchain removes the overhead required to create the network. It scales to meet the demands of thousands of applications running millions of transactions for aircrafts parts provenance.