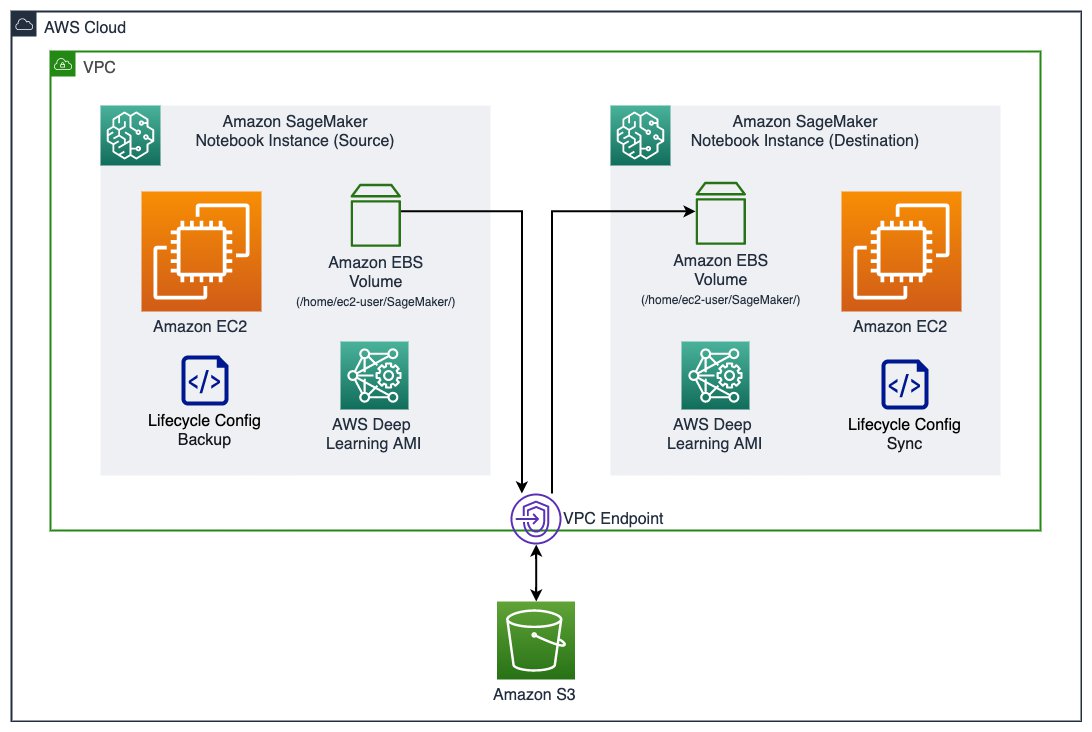 A SageMaker notebook instance consists of an Amazon Elastic Compute Cloud (Amazon EC2) instance with an Amazon Elastic Block Storage (Amazon EBS) volume attached, running an image built on top of the AWS Deep Learning AMI. The EBS volume (attached on /home/ec2-user/SageMaker/) is where you save any code, notebooks, or data persistently inside a notebook instance, and is subject to the migration to a new instance. In this solution, we use an Amazon Simple Storage Service (Amazon S3) bucket to store backup snapshots of an existing EBS volume. We then use lifecycle configurations to create a backup snapshot of the source EBS volume and synchronize a snapshot to the destination instance. You can easily indicate the S3 bucket name and the desired snapshot by tagging the instances.

When using the lifecycle configuration, you don’t need to open and be inside a notebook instance to initiate the backup or sync. It allows an administrator to script the migration process for all notebook instances for an organization.

In many cases, your notebook instance could run in an Amazon Virtual Private Cloud (Amazon VPC) and not have a direct internet access. The communication to the S3 bucket goes through an Amazon S3 VPC gateway endpoint.

To get started with your migration, you need to set up the following prerequisites:

First, we need to create two lifecycle configurations: one to create backup from the source instance, and another to synchronize a specific backup to a destination instance.

We have created two lifecycle configurations: one for backing up your EBS volume to Amazon S3, and another to synchronize the backup from Amazon S3 to the EBS volume. We need to attach the former to an existing notebook instance, and the latter to a new notebook instance.

Back up an existing notebook instance

You can only attach a lifecycle configuration to an existing notebook instance when it’s stopped. If your instance is still running, stop it before completing the following steps. Also, it will be safer to perform the backup process when all your notebook kernels and processes on the instance are shut down.

The instance may take a minute or two to transition to the Stopped state.

You can monitor the instance details while it’s being updated.

We need to tag the instance to provide the lifecycle configuration script where the backup S3 bucket is.

You should see the following tag details.

When the instance is starting, on-start.sh from the backup-ebs lifecycle configuration begins, and starts the backup process to create a complete snapshot of /home/ec2-user/SageMaker/ in s3://<ebs-backup-bucket>/<source-instance-name>_<snapshot-timestamp>/. The length of the backup process depends on the total size of your data in the volume.

The backup process is run with a nohup in the background during the instance startup. This means that there is no guarantee that when the instance becomes InService, the backup process is complete. To know when the backup is complete, you should see the file /home/ec2-user/SageMaker/BACKUP_COMPLETE created, and you should see the same in s3://<ebs-backup-bucket>/<source-instance-name>_<snapshot-timestamp>/. 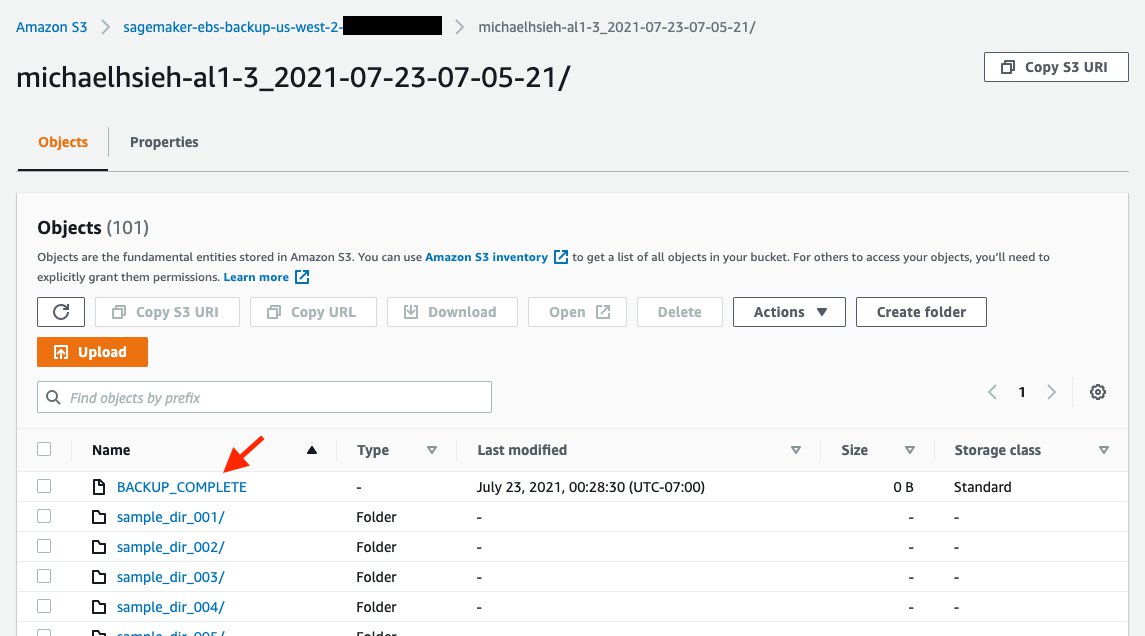 Synchronize from a snapshot to a new instance

When the backup is complete, you can create a new instance and download the backup snapshot with the following steps:

When your new instance starts, on-create.sh in the sync-from-s3 lifecycle configuration performs aws s3 sync to get the snapshot indicated in the tags from s3://<ebs-backup-bucket>/<source-instance-name>_<snapshot-timestamp>/ down to /home/ec2-user/SageMaker/. Again, the length of the sync process depends on the total size of your data in the volume.

Consider the following when performing the backup and sync operations:

When migrating from Amazon Linux to Amazon Linux 2 in a SageMaker notebook instance, there are significant conda kernel changes, as described in the announcement. You should take actions to adopt your code and notebooks that depend on kernels that are no longer supported in Amazon Linux 2.

Michael Hsieh is a Senior AI/ML Specialist Solutions Architect. He works with customers to advance their ML journey with a combination of AWS ML offerings and his ML domain knowledge. As a Seattle transplant, he loves exploring the great mother nature the region has to offer, such as the hiking trails, scenery kayaking in the SLU, and the sunset at the Shilshole Bay.