Today, we introduce the Amazon Web Services (AWS) Reference Architecture for Virtual Production with Epic Games’ Unreal Engine. AWS customers, when challenged with building the right architecture for virtual production, can follow the best practices outlined in this post. This reference architecture is built with security, agility, and operational excellence in mind. 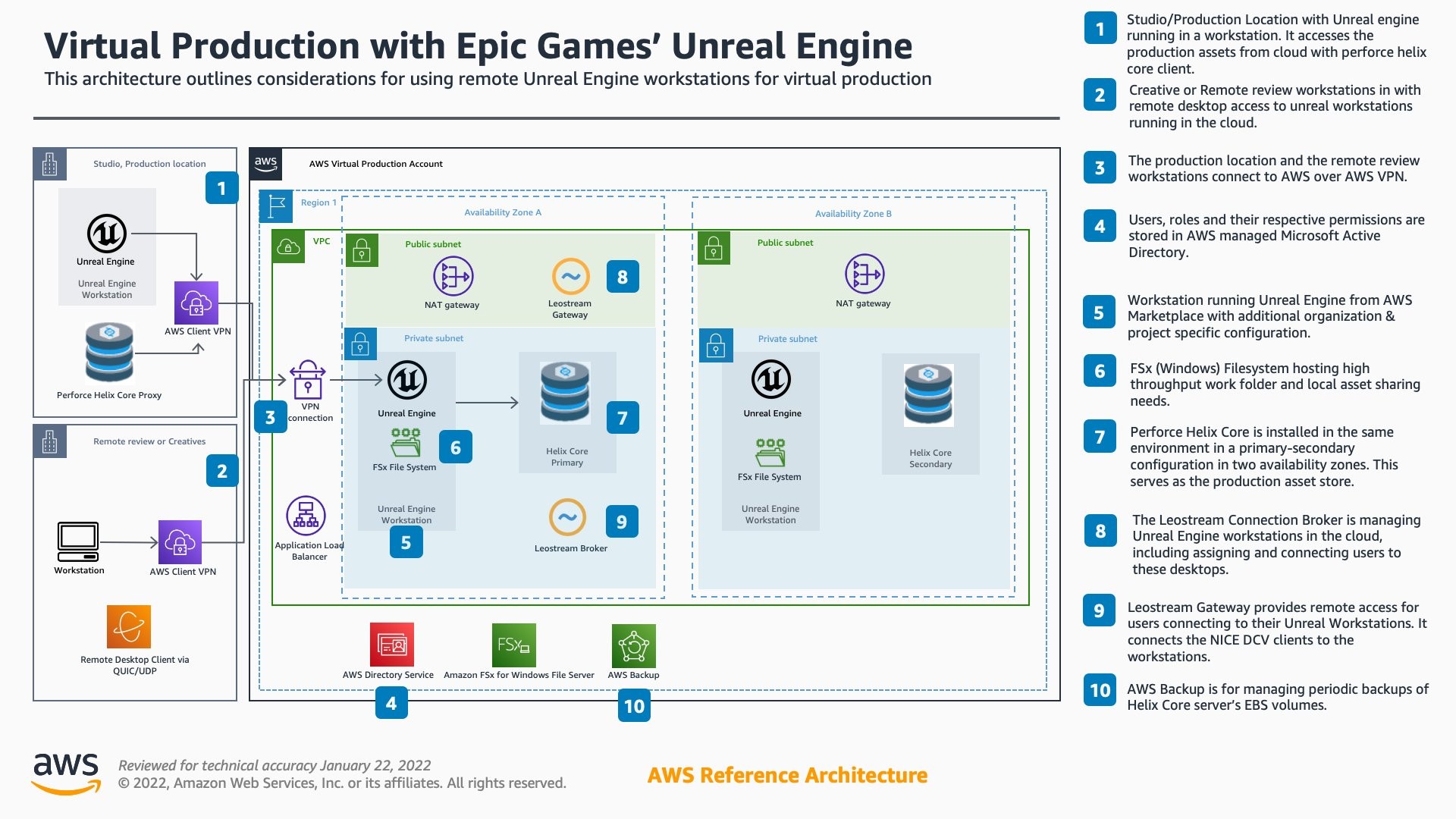 This architecture links the production team on-set, a virtual art department working remotely, and other remote collaborators participating in the pre- or post-production process in a single environment powered by AWS.

At the center of this architecture is Amazon Elastic Compute Cloud (Amazon EC2), a compute workstation running Unreal Engine in the cloud. An Amazon EC2 G5 instance family supports up to 8 NVIDIA A10G Tensor Core GPUs and second generation AMD EPYC processors. You can also get up to 100 Gbps of network bandwidth, and up to 7.6 TB of local NVMe SSD storage. You can get started using an Amazon Machine Image (AMI) for Unreal Engine 4 (UE4) from AWS marketplace. We built this AMI in collaboration with Epic Games. It contains a ready-to-run version of UE4 without having to build an AWS-specific version of your UE4 install. It can also work as a base image if you choose to customize this for your organization’s specific needs.

We added Perforce Helix Core for asset storage needs to this reference architecture. Many of our customers use Perforce Helix Core for their asset management in the cloud with Unreal Engine. It runs on general purpose Amazon compute instances (Amazon EC2) and stores assets on high-performance Amazon Elastic Block Store (EBS). We recommend you deploy Perforce Helix Core in two availability zones in a primary-standby configuration. In addition, AWS Backup can be used to schedule periodic backups for its storage volumes. Perforce Helix Core is available in AWS marketplace for you to get started.

We selected NICE DCV, a high-performance remote display protocol, for the desktop streaming protocol in this architecture. It offers a secure way to deliver remote desktops and application streaming from the cloud to Microsoft Windows, Linux, and Mac desktops and mobile devices under varying network conditions. With NICE DCV and Amazon EC2, customers can run graphics-intensive applications remotely on EC2 instances, and stream their user interface to simpler client machines, eliminating the need for expensive dedicated workstations. NICE DCV host software is included in the Unreal Engine AMI mentioned above, so no additional setup, configuration, or cost is required.

You can start by installing a client on your local machine and you will be ready to connect to the cloud workstation running Unreal Engine. This design includes Leostream connection broker and Leostream gateway to this architecture. Leostream offers powerful remote desktop management capability to organizations running more than a handful of Unreal Engine workstations in the cloud. You can get started with Leostream from the AWS Marketplace. Even though we selected NICE DCV as a prescriptive choice, the reference is easily modified for organizations that want to use Teradici.

We added Amazon FSx for Windows File Server as shared storage for Unreal Engine workstations in the cloud. Artists use this as a scratch space and work folder. Amazon FSx for Windows File Server offers fully managed, highly scalable, and reliable file storage on Microsoft Windows server that is available over SMB. This integrates well with the AWS managed Microsoft Active Directory (AD) that we selected for user management in this architecture, and offers administrative capabilities needed for larger organizations. User settings and configurations are stored in an Amazon EBS volume with AWS Backup.

We recommend you build your infrastructure in the closest AWS Region to your artists. If you have artists in different geographic locations, AWS offers multiple options for replicating data from your primary region to another region. We also recommend you create your infrastructure in at least two availability zones in a single AWS Region for resiliency and failover.

The on-set production workstations running Unreal Engine and Perforce client connect to the cloud environment over AWS VPN for security, as do the artists connecting remotely for additional protection.

You can build the entire environment using automation technologies like AWS CloudFormation or you can take advantage of Amazon Nimble Studio. Nimble Studio provides an easy way to create creative studios in the cloud, rapidly onboard and collaborate with artists globally, and create content faster on AWS’s global infrastructure. 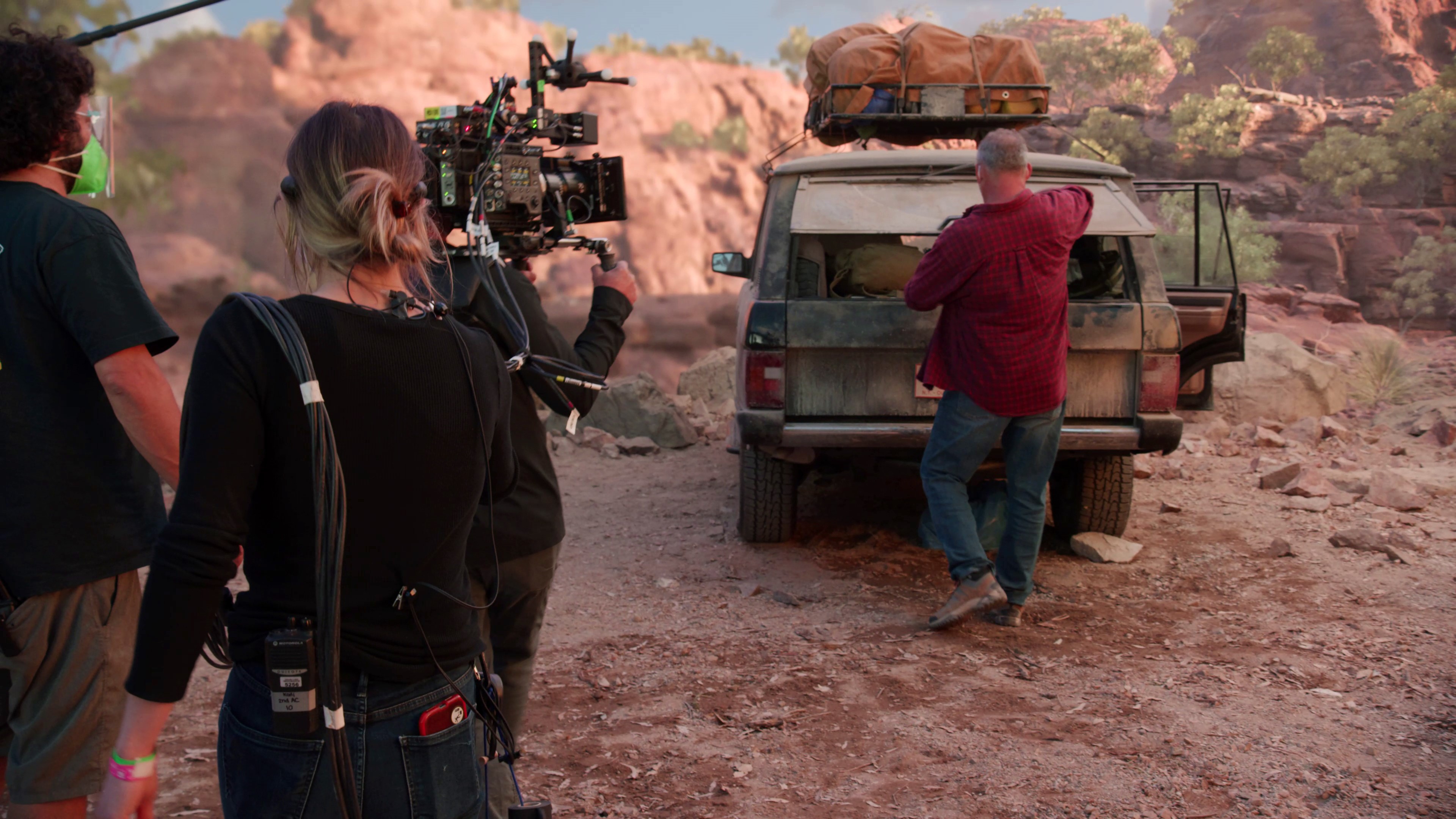 “At Epic Games, we’re excited to expand our partnership with Amazon Web Services beyond Games and into areas like Film and Television,” said Rob Di Figlia, Business Development Manager at Epic Games. “Unreal Engine is helping drive a monumental shift in real-time technology, transforming the way visual effects and animated productions are being made. AWS cloud infrastructure is accelerating that change by making Unreal Engine accessible to the masses and empowering the next generation of creators.”

“The beauty of using Unreal Engine on AWS is that it’s like being on set. You can actually look at what you are working on, you can make changes in real time and it’s way more creative. It’s very liberating as a tool for an artist and sets your imagination free. Up until this point you would think, ‘oh are we going to liquids? That is really expensive!’ or “People? Hair is incredibly hard!’” according to Angus Kneale, Chief Creative at Preymaker. “Now with all the advancements in Unreal Engine it liberates the filmmaker and the storyteller to not be concerned about things that once were incredibly complicated and difficult to do.”

AWS actively listens to customers and works to remove the complexity of virtual production infrastructure to allow creatives to focus on what we all love, great content. In an earlier blog post, “Virtual Production and the rise of the microstudio”, HaZ Dulull, co-founder of Hazimation, spoke to the power of cloud-based virtual production. In a recent follow up, Haz confirmed the challenges in setting up virtual production, stating, “Work is required and technical know-how setting up servers. For large studios that’s maybe fine, but for indie studios, we spend a lot of time on YouTube and help documentation, and ultimately hiring a server systems person to install it. I want to setup and control my environment within one interface and as simply as possible, whilst retaining all the security protocols projects require.”

The AWS Reference Architecture for Virtual Production provides studios with a prescriptive architecture that is easily deployed and expands to match the needs of both large and small studios. The team is presenting and discussing virtual production at the Hollywood Professional Association Tech Retreat in Palm Springs, February 21-24 this year. To learn more, please reach out to virtualproduction@amazon.com.