This blog is the first part of a two-part series that describes how to host a secure DICOM server on AWS. It is based on the Dicoogle open source software, which provides the functionality of a PACS (picture archiving and communication system). A PACS stores and indexes DICOM medical image files, and uses the DICOM protocol to facilitate the upload, download, and search of DICOM studies.

The first part includes a brief introduction on DICOM, DICOM functionality, additional Dicoogle functionality, networking, and security, as well as an overview of AWS services used in the solution.

The second part includes a detailed walkthrough of solution deployment on AWS and step-by-step testing.

The solution architecture consists of the following components:

DICOM is a data model organized in the sequence Patient – Study – Series – Instance. A patient has one or more studies, which may also be known as exams or procedures. A study has one or more series performed on the same modality (for example, a scanner). A series has one or more instances with each instance representing a 2D image or slice of a 3D image. Each DICOM image contains a header section that stores metadata (UID and text description) about a patient, study, series, and instance. You can find detailed information about the dictionary here.

DICOM software needs to maintain and index the hierarchy from individual files stored on disk. Such indexing functionality can be fulfilled by using a relational database. In the case of Dicoogle, Dicoogle has a plugin architecture that supports a default Apache Lucene based indexer, as well as the possibility of relational database based indexer.

In this blog, we’ll use three of DIMSE services: C-FIND, C-STORE, and C-MOVE. You can find a detailed definition of each here.

While DIMSE is the traditional DICOM protocol, DICOMweb is a new protocol developed for web-based medical imaging. DICOMweb has a set of RESTful services that fulfill the function of querying, retrieving, and storing images. DICOMweb is supported by Discoogle and allows developers to use familiar web-based tools to interact with DICOM server. Please note that we will not cover DICOMweb in this blog.

User can use the dcmtk DICOM client software to send DICOM commands to the Dicoogle server using the DIMSE protocol. The client software accesses DICOM files on the user’s local filesystem and from there can do three things:

The Dicoogle server stores individual DICOM files on the filesystem and uses an indexer to store the relationship between the files and the DICOM series and study where they belong. DICOM images received using the DIMSE protocol are indexed and stored upon receipt.

The administrator can interact directly with the Dicoogle server using its web server through HTTPS. This provides a graphical interface where the DICOM data store can be examined, and is used to control actions such as building an index of files received directly on the filesystem. 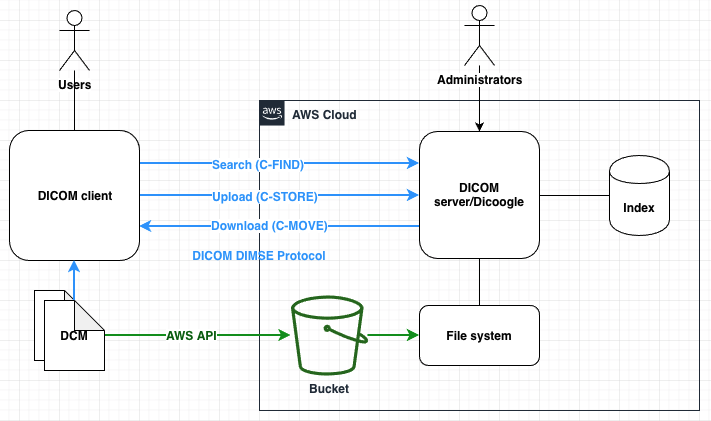 Now that you know the functionality the solution provides, let’s expand and explain how we address networking in the solution.

First, let’s look at the networking aspect of the solution that fulfills DICOM functionality.

Imagine you’re a PACS service provider. You choose Dicoogle as a DICOM server (provider) and deploy it in a Virtual Private Cloud (VPC) on AWS to provide controlled network access to the server. Access to the server is provided to allow access to Dicoogle’s web console to perform administrative activities.

A customer is interested in consuming your PACS service from its on-premises environment. You can allocate a public IP for your service, expose service to your customer, and let your customer connect to your service through public Internet as illustrated in diagram below. Please note that this may pose security concerns, so we don’t recommend this approach.

Once the networking connectivity is established, your customer can then use DICOM client software to send images over the connection to Dicoogle. This essentially performs the C-STORE operation described in the ‘DICOM Introduction’ section above. Your customer can also perform C-FIND operation over the same connection.

The C-MOVE operation is used to transfer DICOM studies, series, or instances from one DICOM node to another. It requires that the IP address of the destination node be preconfigured in the originating node as a destination.

C-MOVE is a two-step operation. In the first step, DICOM client node initiates a transfer that sends a C-MOVE request to the originating node (which, in this case, is Dicoogle). This indicates that both the requested entity (the study, series, or instances) and the destination should be sent. In the second step, the originating node (Dicoogle) sends the requested entity to the destination. Your customer can perform the first step of C-MOVE using the same connection illustrated in the diagram above.

Let’s have a look how connection in the second step can be established.

Now let’s look at networking from the perspective of fulfilling an additional Dicoogle functionality.

For images with limited bandwidth from customer’s premises to AWS, consider using AWS Snow family as an alternative approach.

Once images are in the bucket, use AWS Datasync service to transfer images from the S3 bucket to elastic file system used by Dicoogle. From there, login to Dicoogle to perform indexing. Once Dicoogle indexes the images, your customer can then perform DICOM C-FIND/C-MOVE operations.

Security is our top priority at AWS. Let’s take a look how we address security in the solution.

Network control: In the architecture diagram below, we create three separate VPCs. The first is labeled Simulated OnPrem to host compute resources simulating DICOM client node and destination node. The second is labeled Consumer, and it hosts a VPC endpoint. The third is labeled Provider, and it hosts Dicoogle. In the three VPC, we put security groups around compute, elastic file system, and VPC endpoint resources to restrict traffic from and to intended sources and destinations. In the S3 bucket, we also define policy to restrict access from intended sources only. 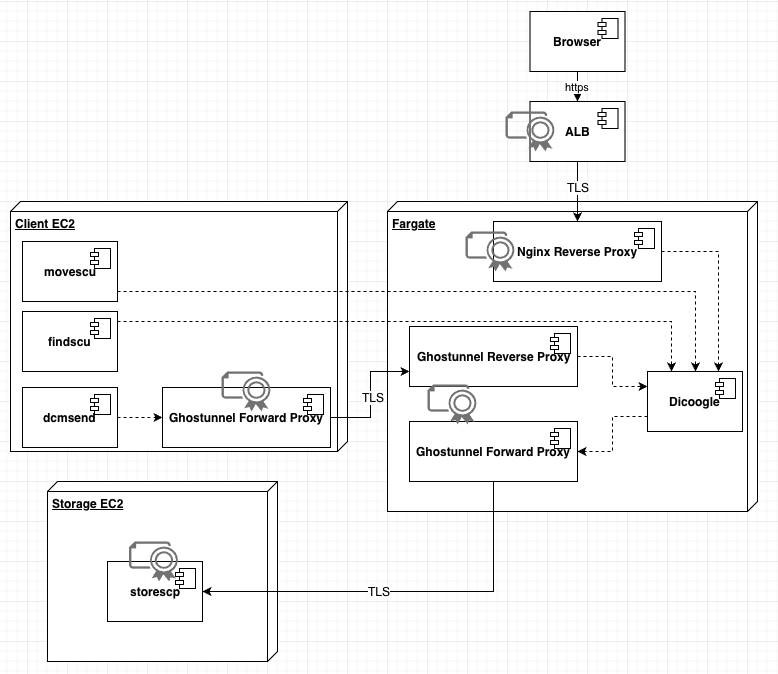 The solution is built upon the following AWS services.

Below is the architecture diagram: 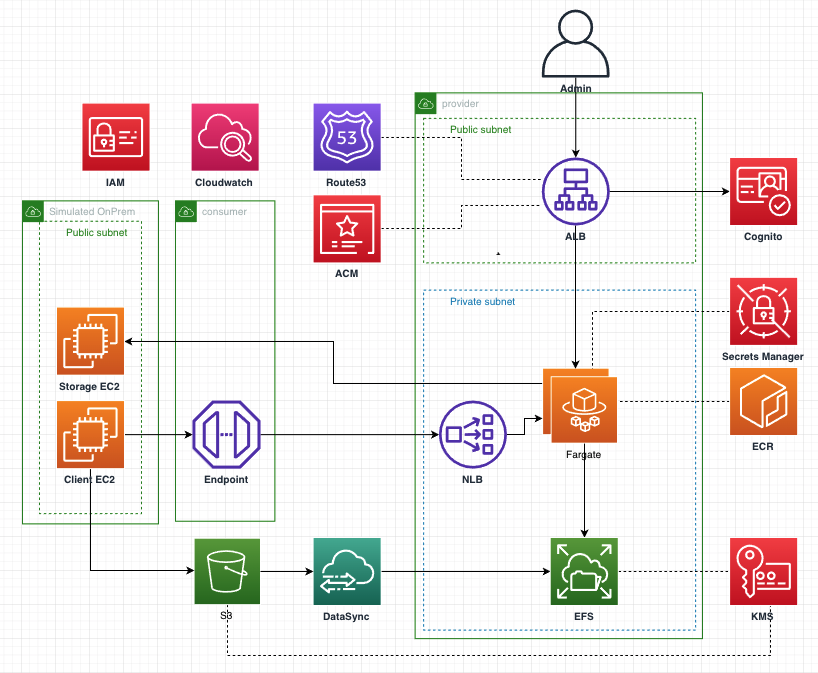 In this post, I started with a brief introduction on DICOM, the DICOM functionality and the additional Dicoogle functionality the solution provides. Then, I explained the networking and security design considerations within the solution. Lastly, I illustrated the AWS services used in the solution and their respective functions, as well as an architecture diagram.

In part two of this blog series, I detail the steps needed to deploy the solution on AWS and perform testing that demonstrates how to fulfill DICOM and Dicoogle functionalities.