Provisioning a Virtual Private Cloud at Scale with AWS CDK

By Francois Rouxel, Solution Principal and APN Ambassador at Slalom 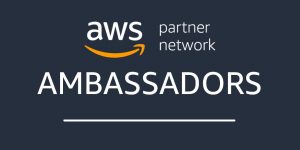 Infrastructure as code (IaC) is one of the most important concepts used with cloud solutions. It provides a way to treat your infrastructure as if it were a coded application. The resulting code is stored in a repository and can be part of any CI/CD pipeline.

In this post, I will show you how to create 100 virtual private clouds (VPCs) in one AWS region without providing any parameters; the default limit is five VPCs per region. More, you will see how to easily establish a peering connection between two of them within a single line of code.

I am a Cloud Solutions Architect at Slalom and have been an APN Ambassador since early 2020. APN Ambassadors work closely with AWS Solutions Architects to migrate, design, implement, and monitor AWS workloads. I have been working in IT for 20 years and have oriented my interest and expertise in the cloud. My role at Slalom is focused on helping companies migrate to AWS.

Writing an AWS CloudFormation template can be challenging sometimes, as it does not have a dynamic nature. For instance, it’s not possible to create a loop in the template to provision the same infrastructure (subnets and Network Access Control lists, for example) over many AWS Availability Zones.

The AWS Cloud Development Kit (CDK) is a tool that helps you create and deploy CloudFormation templates. CDK was released in October 2019 and offers valuable features like loops. In this post, you will see how to use some of those features to create and deploy VPCs at scale. 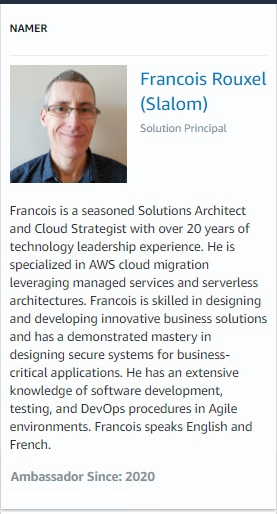 A virtual private cloud (VPC) is an isolated private network in which you can provision resources. It can be peered or connected to another VPC or network on-premises.

Once your VPC is peered with another one, instances from the peered VPC can see all of the instances in your VPC. This, of course, depends on the security groups you may have configured, but if your peering connection is well set in your route tables, the connectivity is here.

Things to Consider When Creating a VPC

Things get complicated when you want to peer your VPCs with others that have overlapping CIDR ranges. In this case, the peering connection won’t succeed. This post shows you how to create VPCs without having to worry about this detail.

In an IT project, it’s common to see many teams working on different features. A typical pattern is for each team to have a dedicated Git branch created from the main branch of the project. The CI/CD pipeline will build and deploy the solution for each branch.

In a case where there are two development teams, we could have two branches (dev1 and dev2), and the main branch (staging) would be the integration branch, where you will merge the feature of each team.

Note that we could have chosen different accounts and regions. As an example, we could have deployed vpc-dev-1 and vpc-dev-2 in ca-central-1 in a development account, and vpc-staging in us-east-1, in a test account. Even with this setup, VPC peering is possible.

A custom resource (such as an AWS Lambda function) is used to know when all stacks are complete. This function will update the Amazon DynamoDB table to list all the VPC and subnets deployed during the process.

In the architecture diagram below, you see three stacks created from the CloudFormation templates: 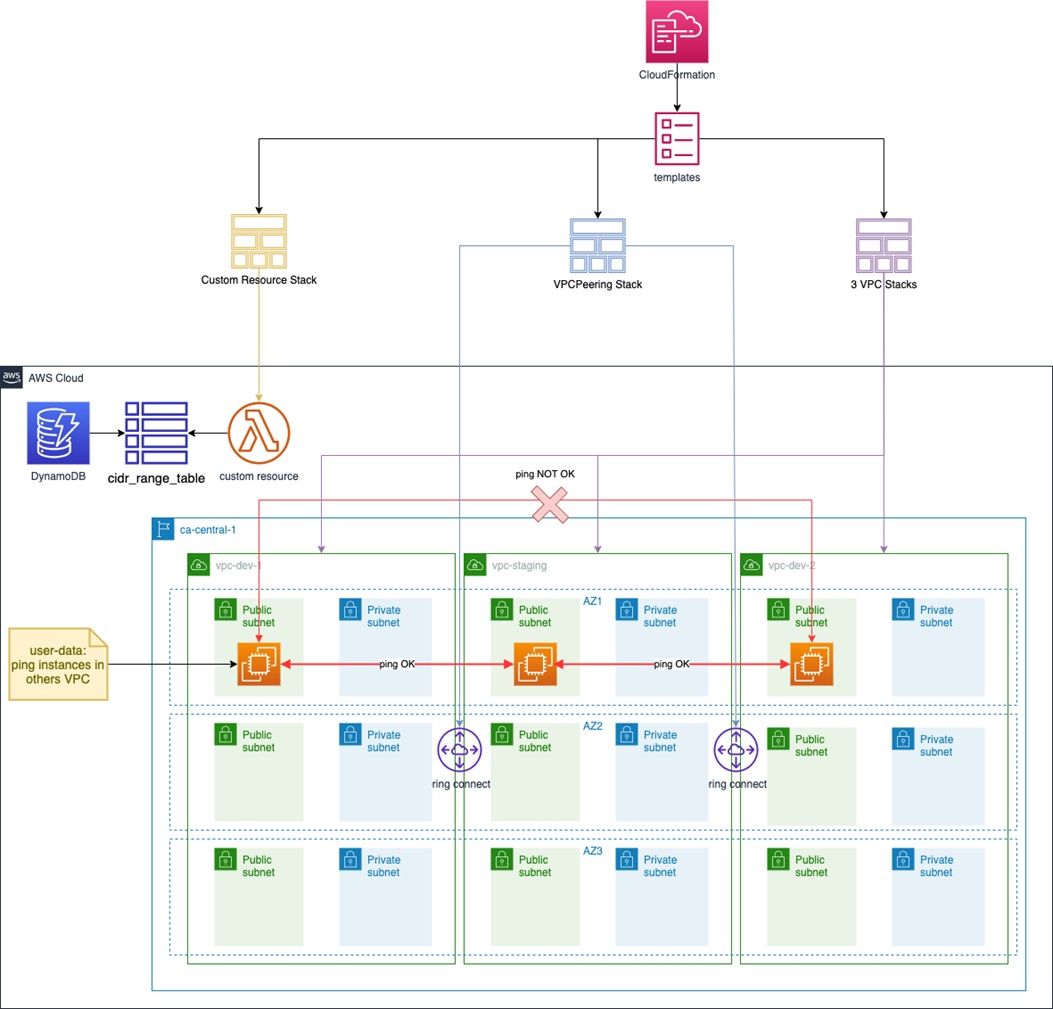 VPC Peering Transitivity is Not Allowed

One important concept with AWS and peered VPCs is the non-transitivity of VPC peering. Take our three VPCs, for instance: 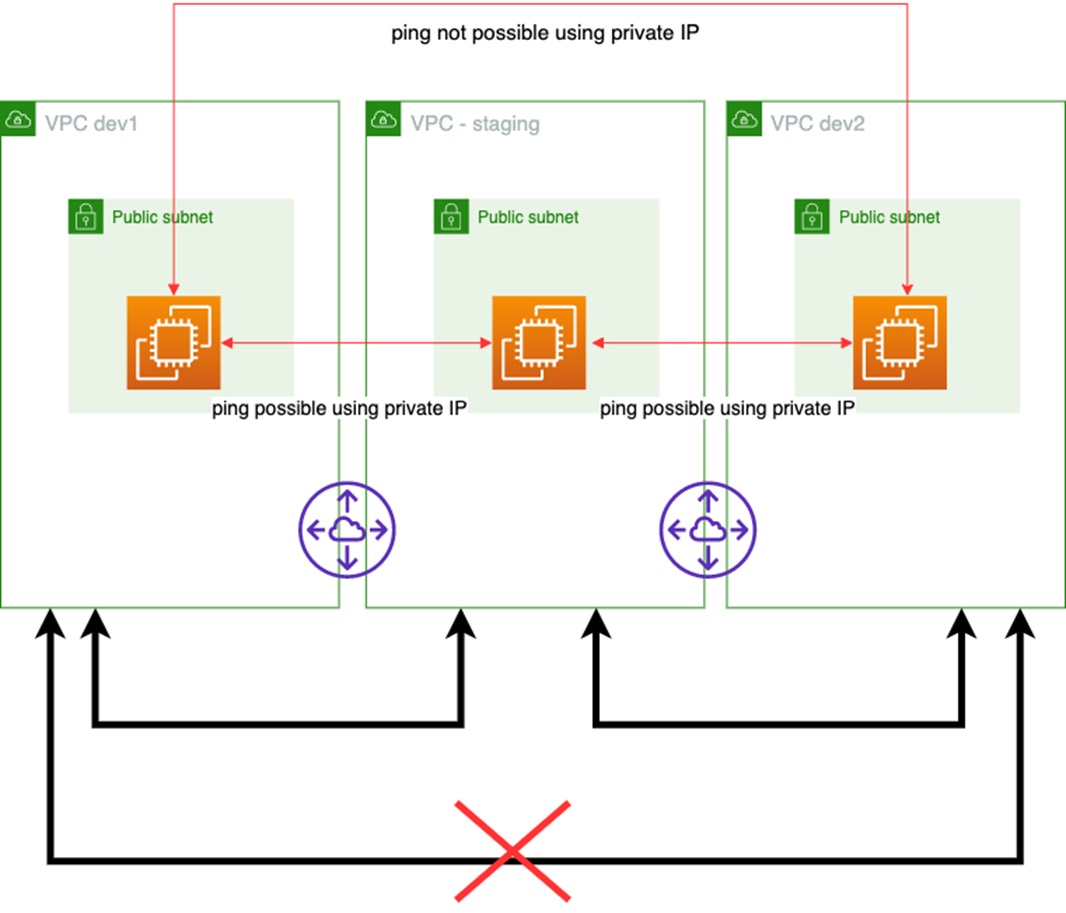 To verify this statement, the solution will deploy an Amazon Elastic Compute Cloud (Amazon EC2) instance in each VPC. Each EC2 instance will try to ping every minute the other instances, using their private IPs, and will output the result into one of our DynamoDB table.

Note that peering two VPCs together is not enough to make the ping possible. The solution makes sure the security group attached to each EC2 instance allows ICMP traffic within the three VPCs, and that each route table has a route that allows the networking connectivity.

What About CIDR Ranges?

Amazon DynamoDB is a very powerful NoSQL database and a perfect place to store key/value pairs. I will use it to store the VPC CIDR ranges and their subnets.

This post is a good opportunity to introduce AWS Cloud9, an Integrated Development Environment (IDE). AWS Cloud9 runs on either Amazon EC2 or your locale machine. One nice feature is that it comes with useful pre-installed tools like Git, Python, AWS Command Line Interface (CLI), or CDK.

Here are the steps to use AWS Cloud9:

Once the repository is cloned, our file structure should look this: 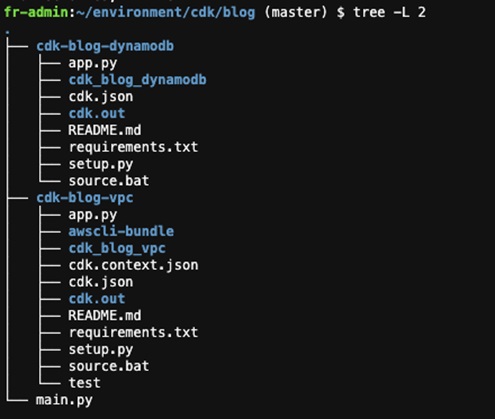 DynamoDB is a NoSQL database, meaning there is no specific table schema pre-defined. This is useful when you want to describe in the same table different kinds of entities like VPCs or subnets.

Two important files for the tables creation are:

Note that app.py only uses one stack, so you don’t have to specify the stack to deploy.

Let’s have a look at the stack:

This stack is supposed to create two DynamoDB tables:

Let’s deploy the stack by running the following command:

Once the stack status is complete, you should be able to see it through the console.

The goal here is to provision VPCs without worrying about CIDR ranges.

Let’s have a look at the stack:

Now, let’s dig deeper in app.py where the VPC stacks are created.

We can see three stacks:

If we take a closer look the Custom Resource stack, we can see that we are provisioning a Lambda function:

The code associated with this Lambda function is available in the AWS Lambda folder. In this example, I might have given too much permission to simplify the overall solution, but you may want to restrict a little bit the resources for each different possible action.

The following IAM role shows the permissions used to execute the Lambda function:

This Lambda function needs permissions to describe the newly created VPCs and their peering connections.

Note that in this example, the Lambda function created the required routes in the route tables associated of each public subnet when a VPC peering connection is active. Even if the CDK can create routes, this option has not been applied as it would create a circular dependency (the VPC peering stack has a dependency on the VPC stacks).

Adding the routes in the route tables would have made the VPC stacks creation conditional to the VPC peering stack creation, which results on a circular dependency.

In the cdk-blog-vpc folder, enter the following command:

Once the provisioning is complete, you should see this in the output:

After about one minute, the DynamoDB table should show the ping results between EC2 instances.

About Non-Transitivity with VPC Peerings

To be able to prove the non-transitivity with VPC peering, I had to add specific routes to the route tables. Since it’s optional (demonstration purpose), I added comments surrounding the code that should be removed.

In the image below, you can see that a specific route (with a /32) has been added by the code above.

In this post, you saw how easy it can be to deploy virtual private clouds using the AWS Cloud Development Kit (CDK). This solution proposes an elegant way to avoid overlapping CIDR ranges that prevent you from peering VPCs together.

This post was also a good opportunity to introduce AWS Cloud9, a powerful integrated development environment (IDE) that comes with the CDK and the AWS CLI already installed.

Moreover, this post could be used as a workshop to demonstrate the non-transitivity of VPC peering.

Slalom is an AWS Premier Consulting Partner. A modern consulting firm focused on strategy, technology, and business transformation, Slalom’s teams are backed by regional innovation hubs, a global culture of collaboration, and partnerships with the world’s top technology providers.