Traditionally, developing a custom game server is a pretty arduous task. Putting a server together requires a lot of knowledge about networking systems, backend development and server operations. This can be tough on smaller teams who may not have the resources required to develop this type of system. And, when you just want to get on with creating a great game, dedicating a lot of time and money to getting a game server running is work that could be better spent on building features for your players.

Wait, no, multiplayer servers are easy

Does it have to be so complicated, especially when your gameplay server needs are pretty light? Well, as it turns out, no. I’m going show you how I developed a competitive two-player racing game in just a few hours using Amazon GameLift Realtime Servers.

GameLift Realtime Servers help developers quickly create and update affordable game servers with a few lines of JavaScript. It’s a great choice for games that don’t need a lot of backend horsepower, and is designed with mobile, turn-based, and messaging games in mind.

The idea is that you can create custom game logic without having to build a server. All you need to do is create a script (using JavaScript) to implement callbacks that deal with communication between players and changes in game state. Some examples include handling when a player joins the game, or sends a new message to other players. You upload the script to the GameLift service and then integrate a simple .Net SDK into your game client to talk to the server. GameLift does all the work to get the client and server talking to each other, provides a simple API to send messages back and forth between the two, and deals with all of the server hosting, scaling, and other operational stuff so you don’t have to. You really just focus on your game code.

It all started with a frog jump

I thought a simple one-click competitive racing game would be a great way to try out GameLift Realtime Servers, but I needed a theme. As a kid growing up in California, every year we’d head out to a crazy event in Angels Camp where people would try to get frogs to jump as far as possible. And we’ve all heard of that classic arcade game with jumping frogs and some really nasty turtles. So, welcome to the development of:

The object of game is pretty simple: two players, each controlling a frog with their space bar, try to get to the finish line first. But this isn’t a contest of who can hit their space bar the fastest! You have to wait until the frog has completed its hop before you hit the space bar again, or the frog will get annoyed and stay put for a while when it lands. This means the winner isn’t determined by the fastest internet connection or who can mash the button the fastest. 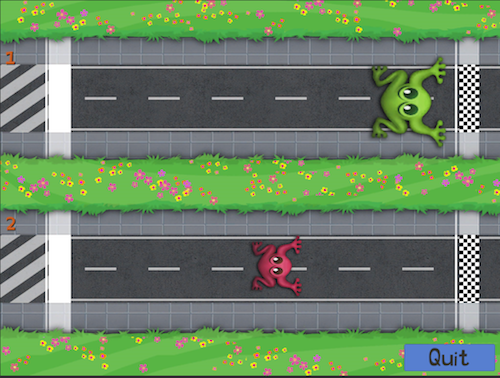 I developed the game client in Unity on Windows, and it should be possible to build using the personal edition of Unity. All of the techniques discussed here should work on any service that can run a .Net runtime. Let us know on the forums if you run in to any issues running this sample or setting up your own projects.

There are a few things you’ll need to follow along with the steps in this article:

The easiest way to start a new project is to get GameLift to host a script for you and allocate the compute power for your servers. The compute power is called a fleet, which is a collection of Amazon EC2 virtual machines that will run your game servers.

We’ll start by creating the most minimal script that GameLift Realtime Servers can run. You can find an example script on this page. Using your favorite code editor, create a new file called MegaFrogRaceServer.js, paste the example script into the document and save it. Next, pack up the script into a zip file. For this example, make sure that you don’t put the script in to a sub-folder. I did this in Windows by right-clicking on the JavaScript file and hitting Send to… compressed (zipped) folder. I called my zip file MegaFrogRaceServer.zip.

I should note that the previous step of creating the zip file solves a “chicken/egg” problem. You need a script to set up GameLift and all the associated services to test your game, but you haven’t actually developed a script yet. So instead, we create a placeholder that will be replaced later with our real code.

Next you’ll upload the script to GameLift and then use it to create a fleet:

Now that the script is ready, we can create a fleet of Realtime servers:

Step 2: The glue between your game and GameLift

Ok, this next step is the most involved besides creating your actual game. We are going to create a client service that talks to GameLift and joins games, starts new game sessions, etc. It’s called a client service, because it’s a web service that your game client communicates with directly. Though it’s possible to integrate the GameLift SDK directly into your game client, it’s not the best practice. Primarily this is because there is no way to secure these calls when they come from outside of your control. Also, you’d need to update the game client when security keys change or expire. So, for our demo, we will create a small client service, using an AWS Lambda to run the service and Amazon Cognito to secure it. 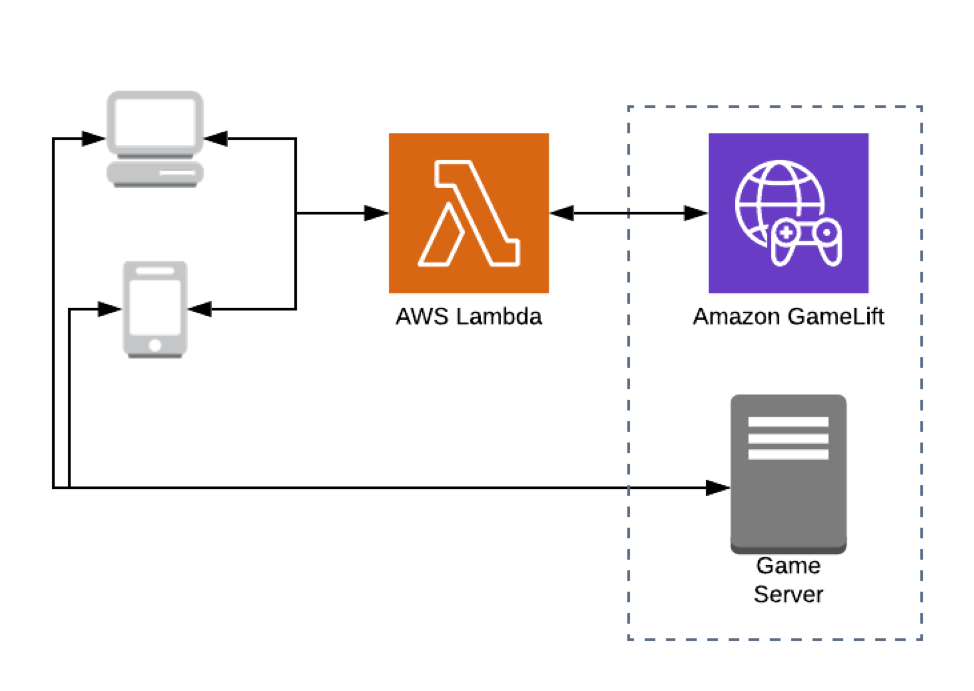 Though this example is somewhat of a toy implementation, it will point you in the right direction for making a more feature-rich client service.

The first task is to create the Lambda function. An AWS Lambda function is code that runs on AWS servers without you needing to manage any of those servers:

The second task is to make the client service callable from the game client. For this demo, we want to require that game client requests be authenticated. I’m going to show how this is done with Amazon Cognito. You’ll use a feature called “unauthenticated identity,” which means that any client with the right information can call our Lambda function. Amazon Cognito is a preferred method of giving clients access to AWS resources without entering credentials; the alternative is to distribute a key to a limited IAM role, which is a more brittle and error prone process requiring game client updates when keys expire. Enabling Amazon Cognito’s “unauthenticated identity” will also make it easy for you to, at a later point, require clients to log in via that service to take advantage of player identities and matchmake based on that identity.

Step 3: Getting the clients and servers talking

The next task is the fun part where we get the client and server talking! We’ll work with my game project, available on GitHub. You’ll need to do a bit of work to get the client running. 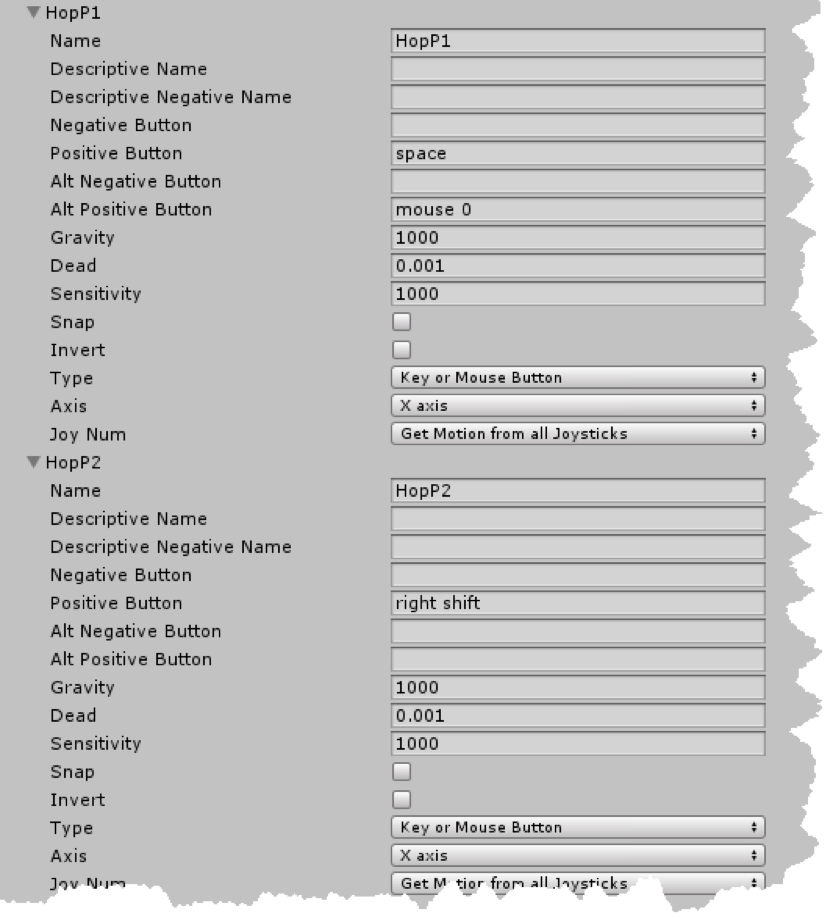 Finally, we need to update our server script, which is uploaded to Amazon GameLift and deployed to your fleet. As a first step, we uploaded a minimal script. Now we need to update it with the Mega Frog Race server script that works with our new game client. The script file is included in the game project files you downloaded from GitHub.

That’s it! Now you’re ready to start playing Mega Frog Race in multiplayer mode with servers hosted on GameLift. You can run two game clients on the same machine for testing, or run them on two different computers if you have them. Have fun! 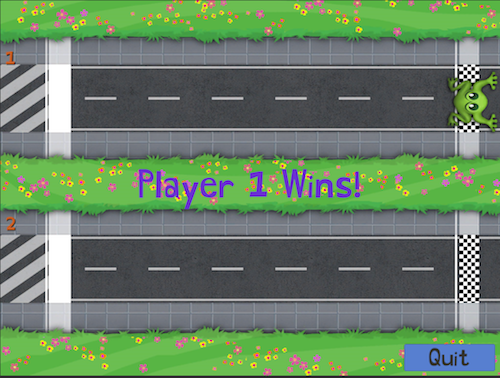 Check out the Amazon GameLift page for more information on all the services GameLift offers.

Notes on developing the client and server

If this is your first time working on a multiplayer game, it’s worth some extra information about the process I used to develop Mega Frog Race as a client server game. Even though the Realtime Servers will make your development life easier, you need to alter your mindset from single-player development. Specifically, you have to think about what code runs on the client, what code runs on the server, and the best way divvy up that work and abstract those differences.

To simplify this, the first thing I did was implement the game with local multiplayer, where two players control the game on the same machine. This allowed experimentation with the game logic without having to worry about a separate server component. It also gave me an understanding of what logic would need to go on to the server and what could stay on the client.

From the beginning I used an architecture that allows the primary game logic to run somewhere other than my local machine. The typical model for this would have:

I developed a simulation that runs in the Unity game client in C#. This allowed me to quickly prototype how I wanted the game to work and tune the gameplay. As a bonus, the game now has a “living room mode” where people can play the game sitting next to each other. If you look at the RTSClient class, you can see the simulation code at the bottom of the file. Also, in the game controller handlers like HopButtonPressed, the handler checks to see if the simulation is running locally or remotely.

Now, I’ll admit, having the handlers check if the simulation is local is more brittle than I would like. The game is so tiny I can (just barely) get away with this as it made the example code easier to follow. An even better architecture would be creating an abstract notion of a game client and then concrete implementations for the Realtime server and local simulation separately. You would then instantiate whichever you needed when the game started. If you’re not writing sample code, I’d recommend this. Here’s a diagram of what that would look like: 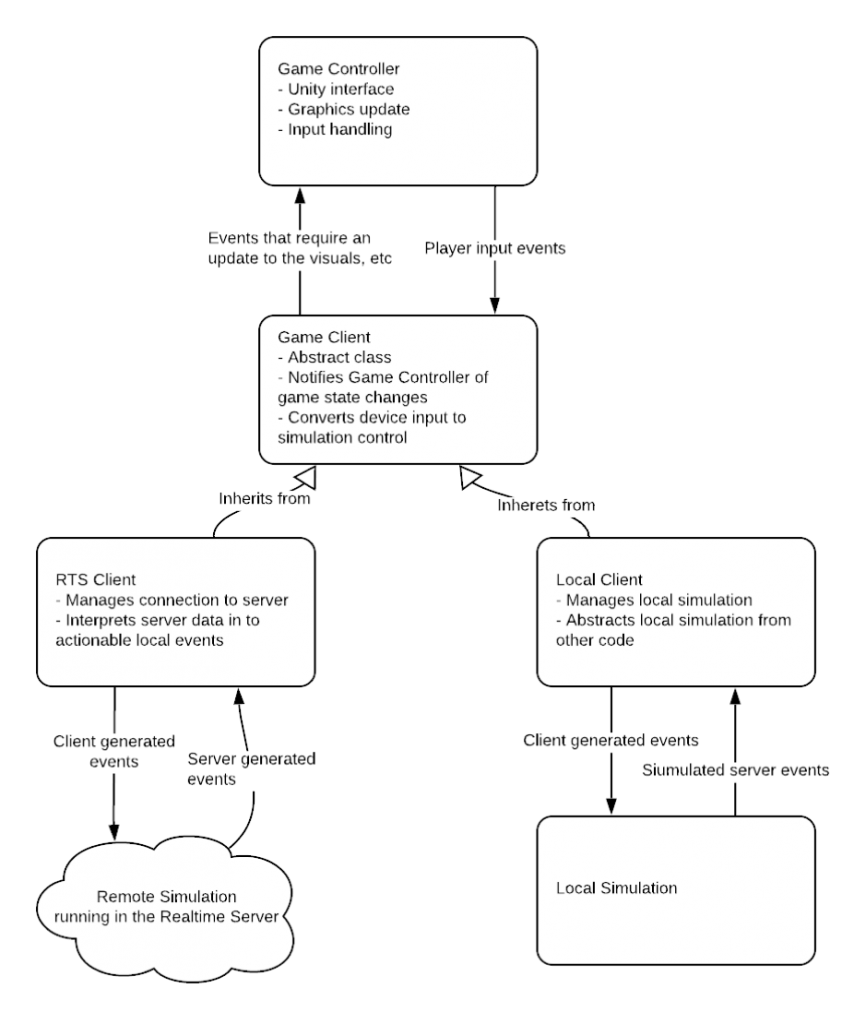 This architecture is more maintainable as you can add new types of clients when the need arises, and it will make it easier to test different components of your game in isolation.

Once I’d finished writing and testing the local simulation, it was an easy job to translate the game logic to work with the Realtime Server. You can see the code in the LocalSimUpdate and LocalSimHopPressed RTSClient is almost the same as the fGameLoop and ProcessHop functions in the server script.

Lastly, it’s important to keep in mind that there could be a delay between when events are triggered on the client and when they appear on the server and vice versa. This should influence your game design decisions. Think about what it means if it takes one second between the player hitting a button, the server acting on that button press and then sending back data to update the client state. Interpolation will become a key tool you use to smooth over these types of issues.

Notes on Debugging the Server

The best way to debug the server is to use copious amounts of console.log() statements in your server code and examine the log files. Examining the log files requires opening an SSH session with the server that is running. Here is how I did this in Windows: