As customers continue to adopt VMware Cloud on AWS, it’s become important to provide scalable and reliable hybrid connectivity to help integrate their SDDCs with on-premises and cloud-native services. Customers should also be able to expand connectivity globally to seamlessly support their business demands.

VMware Cloud on AWS customers have additional network security requirements including network encryption, firewall integration, and traffic segmentation that need to be fulfilled.

In this post, I will explore VMware Cloud on AWS hybrid network design patterns and considerations. I’ll go through various network architecture design options and use cases that address customer requirements.

AWS Direct Connect is a cloud networking service that provides dedicated connectivity from your premises to AWS. Using AWS Direct Connect, you can establish secure and private connections between AWS and your on-premises with flexible connection types and speeds from 50Mbps to 100Gbps. As a result, it provides more consistent network performance, increased throughput, and reduced data transfer out (DTO) cost than internet-based connection.

With an AWS Direct Connect dedicated connection, you can use industry-standard 802.1Q VLANs to create up to 50 logical partitions over the physical link called virtual interfaces (VIFs). These include Private, Public, and Transit VIFs.

For customers with a small cloud footprint that includes a single SDDC and a few Amazon Virtual Private Clouds (Amazon VPCs), you can create and assign one private VIF for every VPC and SDDC to establish connectivity back to the on-premises environment.

Although this design provides simple private connectivity, it does not offer any VPC-to-VPC or VPC-to-SDDC transitive routing capability within the AWS region. This leads to increased latency and a potential throughput bottleneck at the customer gateway.

To achieve a more scalable network design, customers can deploy a transit VIF (instead of multiple private VIFs) which is now supported on all Direct Connect connection types and speeds. In this case, a single BGP session is established over the transit VIF and terminated on a Direct Connect Gateway, which is then associated with an AWS Transit Gateway that provides transitive routing between VPCs, and between on-premises and VPCs in the same AWS region.

In addition, you can establish a virtual private network (VPN) between the SDDC’s NSX Edge appliance and the AWS Transit Gateway using a VPN attachment. The AWS Transit Gateway can now route traffic between the SDDC, VPCs, and on premises using the same Transit VIF. Up to four route-based IPsec VPN tunnels with Equal-Cost Multi-Path (ECMP) are supported at the NSX Edge to provide increased bandwidth and resiliency.

Transit Connect is a VMware-managed AWS Transit Gateway solution that interconnects SDDCs within an SDDC group, and establishes resilient connectivity to on premises over a Direct Connect Gateway. It eliminates VPN management overhead and helps customers simplify network operations at scale through automatic route propagations to route tables in each SDDC.

However, it’s important to note that VMware Transit Connect only supports traffic flow either originated from or destined to resources within a SDDC. As shown in the diagram below, all inter-VPC flows or traffic between VPCs and on-premises will be dropped at the Transit Connect.

VPC-to-VPC and VPC-to-on-premises traffic will be routed directly at the AWS Transit Gateway bypassing the VMware Transit Connect restrictions. SDDC-to-VPC and SDDC-to-on-premises traffic will traverse the VMware Transit Connect and then through the AWS Transit Gateway via the intra-region peering attachment.

Customers with multiple SDDCs and VPCs across multiple AWS regions can easily expand hybrid connectivity to a global scale by utilizing the Transit Gateway inter-region peering capability. AWS Direct Connect Gateway being a global resource is capable of associating itself with up to three Transit Gateways to establish connectivity between multiple AWS regions and on premises via the existing transit VIF.

Furthermore, by using a combination of Transit Gateway intra-region and inter-region peering, you can build connectivity between SDDCs, VPCs, and on premises across same or different AWS regions. The following diagram illustrates various traffic flows in a multi-region deployment that share the same Direct Connect connection. 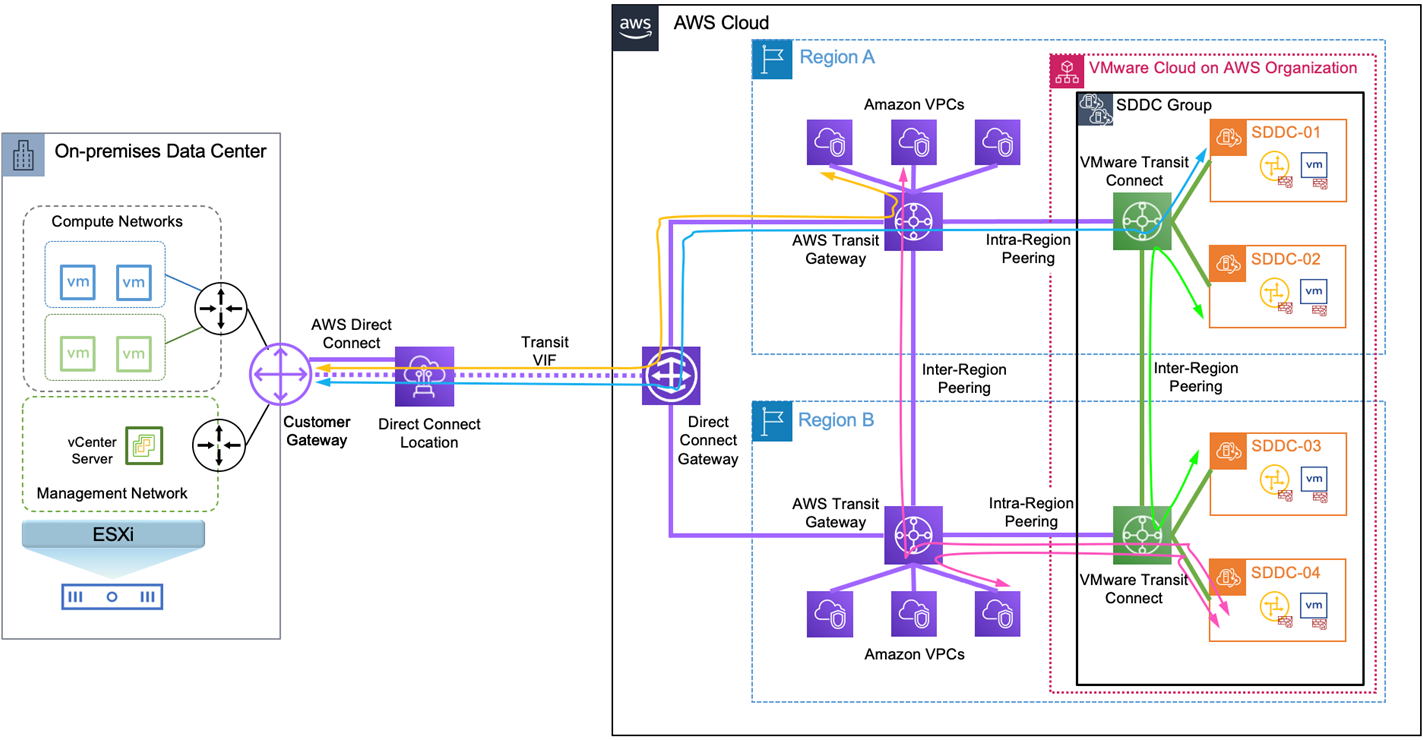 Figure 6 – Shared Direct Connect connection for VPCs and SDDCs in a multi-region deployment.

Customers with latency-sensitive requirements between on-premises and SDDCs, or prefer to have a dedicated uplink into SDDC groups, could deploy a separate Direct Connect connection with a different transit VIF for connecting your VMware Transit Connect. 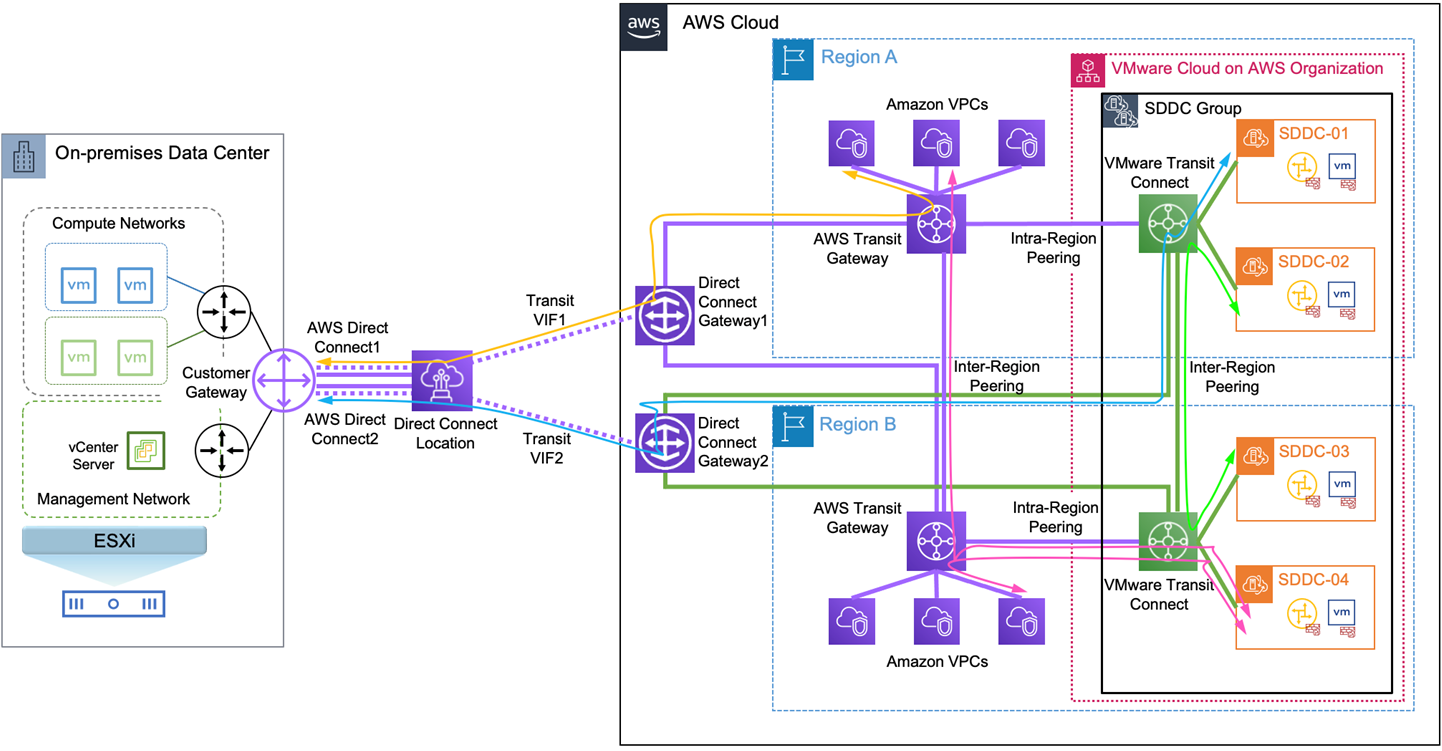 Figure 7 – Separate Direct Connect connections for VPCs and SDDCs in a multi-region deployment.

This design helps offload SDDC-to-on-premises traffic to a different Direct Connect Gateway and transit VIF, therefore reducing potential bottleneck at the intra-region peering. It provides maximum scalability and SDDCs in each region have bandwidth of up to 50Gbps for accessing resources inside VPCs.

Some customers may plan to migrate sensitive workloads into SDDCs or require data encryption in-transit. In this case, you can build IPsec VPNs over the internet, or over an AWS Direct Connect public VIF with more reliable and consistent performance.

It’s recommended to run centralized VPN tunnels from your on-premises gateway to the AWS Transit Gateway (rather than to each SDDC), and then bring traffic into SDDCs using the intra-region peering. Each IPsec tunnel provides a maximum throughput of 1.25Gbps and customers can leverage ECMP to scale the VPN throughput up to 50Gbps to the AWS Transit Gateway. This design reduces management overhead of establishing VPN tunnels into individual SDDCs, and avoids VPN restrictions on the VMware Transit Connect.

In June 2022, AWS announced the Private IP VPN capability that provides an alternative option to encrypt Direct Connect traffic between on-premises and AWS over a transit VIF, without the need for public IP addresses. This feature improves your overall security posture and enables enhanced network privacy. Additionally, customers have the flexibility to utilize private IP VPN over Direct Connect as the primary path, while using VPN over the internet as a backup path.

Figure 8 – Use Private IP VPN as primary path and VPN over Internet as backup.

As shown in the below diagram, MACsec encryption is configured transparently at layer 2 between AWS Direct Connect device and customer gateway. No VPN overlay is required and all layer 3 and above payload is fully encrypted before arriving at the AWS network.

Leveraging AWS Transit Gateway intra-region peering, customers can integrate a security VPC with the SDDC group for centralized traffic inspection. You can deploy the highly available and scalable AWS Network Firewall service or third-party firewall services into the security VPC by using the Gateway Load Balancer.

With this design, the following traffic flows can be inspected using the security VPC:

Note that east-west traffic inspection between SDDCs within the same SDDC group is not currently supported. More details of firewall deployment models and best practices are available in these AWS blog posts:

Figure 10 – Integrating with a security VPC for centralized traffic inspection.

In addition to the network encryption use case, another possible scenario is to use Private IP VPNs for traffic segmentation. You can extend different on-premises virtual routing and forwarding instances (VRFs) to the Transit Gateway by creating one Private IP VPN attachment per VRF.

A similar configuration is applied to the Non-Production route table. This creates an end-to-end network segmentation from on-premises VRFs to VPCs and SDDCs for each corresponding environment.

VMware Cloud on AWS customers can seamlessly integrate their SDDCs with native AWS services. During a SDDC onboarding process, customers are able to establish high-bandwidth and low-latency connectivity to a designated VPC, which is often referred to as the connected VPC. This connectivity is established using cross-account Elastic Network Interface (X-ENI) between the NSX Edge appliance in the VMware-managed shadow account and a subnet within the connected VPC in the customer-managed account.

Data transfer between the SDDC and connected VPC will not incur any egress costs as long as the SDDC and destined native services reside in the same AWS Availability Zone (AZ).

A single consolidated connected VPC can also be used to simplify native services sharing with multiple SDDCs. Virtual machine (VM) workloads running on various SDDCs and accessing native services hosted in the connected VPC will utilize X-ENIs instead of traversing the VMware Transit Connect, therefore improving operations efficiency and minimizing data transfer costs. It’s recommended you reserve a /26-CIDR block at the X-ENI subnet for each SDDC, as discussed in this whitepaper.

As a best practice, we have enabled multi-AZ support on native services such as Amazon FSx and Amazon Relational Database Service (Amazon RDS) in the connected VPC. This ensures that VM workloads can still access these services via the X-ENI after failover to the DR SDDC during an AZ failure. Furthermore, the active instances of these native services should be configured in the same AZ as the Production SDDC to avoid cross-AZ data charges during normal operations.

AWS Direct Connect is the foundational pillar for establishing hybrid connectivity to your VMware Cloud on AWS and cloud-native environments. We strongly recommend using connections from more than one AWS Direct Connect location to ensure resiliency against device or colocation failure. Learn more about recommended topologies and best practices to achieve various levels of resiliency using AWS Direct Connect.

If you have requirements for low-latency access to critical services such as Amazon Aurora, or I/O intensive applications such as backup from SDDCs to Amazon Simple Storage Service (Amazon S3), it’s recommended to deploy these services into the connected VPC to improve application performance and optimize data transfer costs.

In this post, I have discussed VMware Cloud on AWS hybrid network design patterns and considerations for interconnecting your SDDCs with on-premises and AWS services by leveraging AWS networking constructs.

To learn more, we recommend you to review these additional resources: