The evolution of broadcast cloud playout

This post is co-authored by Martin Whittaker – Technical Product Director, Evertz, Aekta Joshi – Sr. Cloud Infrastructure Architect – AWS ProServe M&E, and Mark Stephens, Partner Solutions Architect – AWS. The content and opinions in this post are those of the third-party author and AWS is not responsible for the content or accuracy of this post.

In 2016, Discovery issued a challenge to the broadcast industry – to produce the next generation solution for a playout and control system in the cloud. The solution had to overcome the technical challenges of broadcasting from the cloud with minimal on-premises infrastructure, and it needed to be scalable, flexible, and agile. The solution had to support continuously evolving business models and technical challenges. Evertz, an AWS Partner, and Amazon Web Services (AWS) accepted the challenge.

What is a playout and control system?

Traditionally, playout and control solutions required multiple specialized devices in series to create a Transmission Chain (TX Chain) with each TX Chain producing the output for a channel. Over the years the lines between playout and control have become blurred, with a transition away from discrete and dedicated hardware for each, to a software-based architecture that encompasses both.

Other processes are now modernized and automated and content is now generally delivered as files rather than ingested via tape or machine. Likewise, the dependence on manual operation has led to more automation, driven from the channel’s playlist.

Discovery’s challenge was clear, to transition over 250+ channels and broadcast to 220 countries and territories in 50 languages from a traditional on-premises infrastructure to the cloud.

The project required adaptation of existing technologies and new ones to produce a solution that supported a project of this scale and complexity. This demanded more than a ‘lift and shift’ approach; the solution needed to allow Discovery to scale the system on demand and the tools and flexibility to support new revenue models.

In 2016 Evertz already had a software-based TX Chain (Overture Playout) and playout automation software (Mediator). The Mediator software runs each of the channel’s playlists, which it uses to drive the Overture Playout engines. Mediator stores asset records and asset workflow history, controlled from a web-based user interface. At the time, Overture Playout supported a number of features derived from previous generations of discrete hardware. That included video processing, audio processing, ancillary data insertion, graphics, and support for a range of output formats and frame rates.

Mediator includes a distributed architecture that allows the system to be both scalable and resilient. The product roadmap included a standardized microservice architecture, which would make the integration of cloud-native services more straightforward. 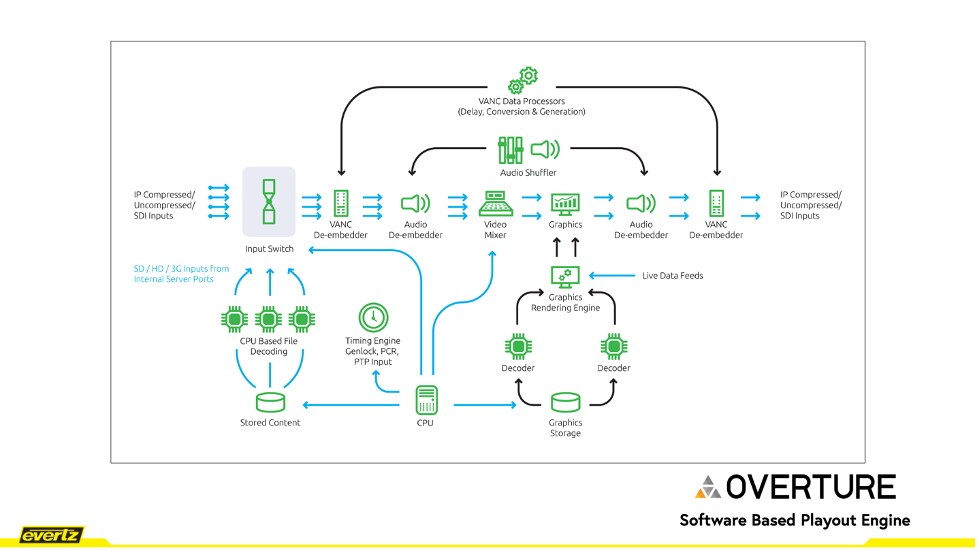 Discovery decided to use the latest Mediator version – Mediator-X – and to adapt the Overture Playout to work within an AWS environment.

Mediator-X holds asset records, playlists, and configuration in its centralized database. Initially, database instances were run in Amazon Elastic Compute Cloud (Amazon EC2)  and part of the Mediator-X core service node. In order to increase the resilience and offer a faster, more reliable high availability service, Evertz decided early on to externalize the database in Amazon Aurora. That move to Aurora allowed Mediator-X to scale to over 250 channels and provide a more reliable operation over self-managing database instances on Amazon EC2. 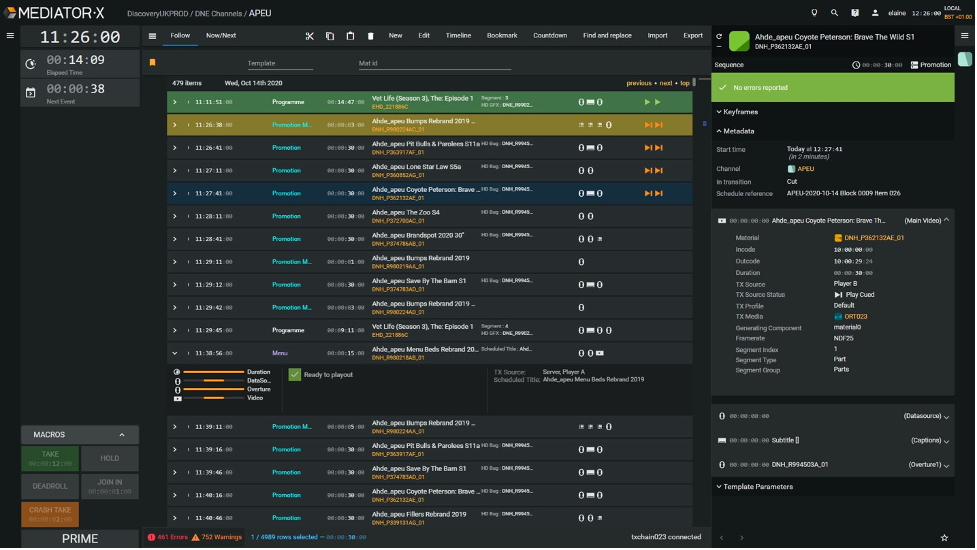 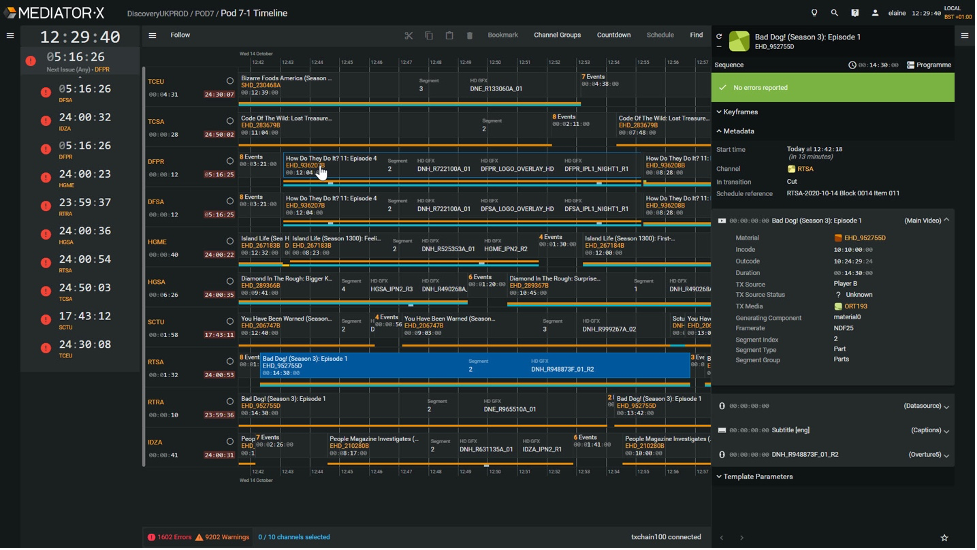 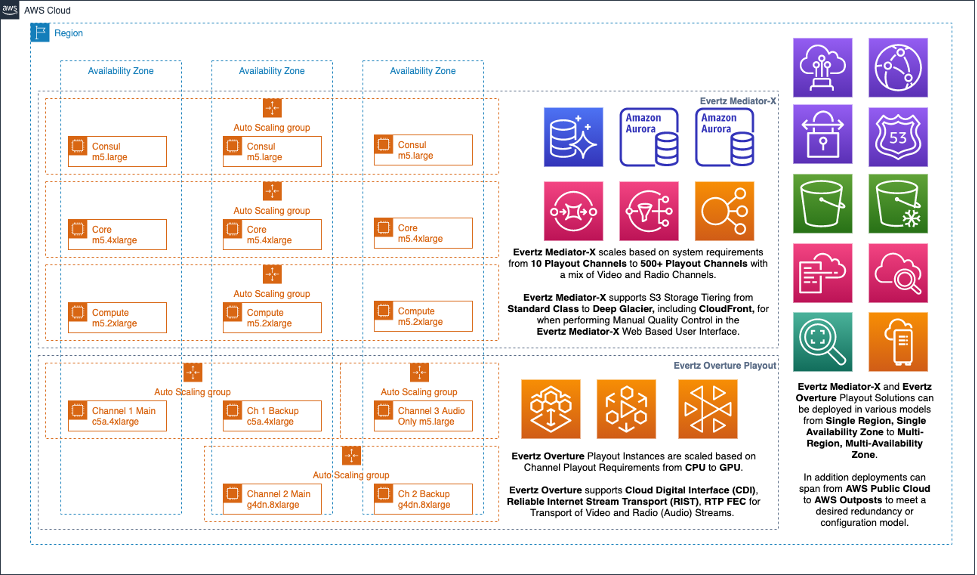 At the start, the Overture Playout ran strictly on the larger GPU based instances such as the g2.8xlarge and g4dn.metal, matching the capabilities of our existing hardware appliance. Each instance could support multiple H.264 output streams and could include any of the following features: multi-language audio processing, audience measurement (Nielsen/Kantar), ancillary data insertion, captions/subtitles), and complex graphics.

Today, customers have greater flexibility and can take advantage of the different Amazon EC2 instances, matching the instance to the channel’s complexity. Overture Playout can now be deployed on CPU-only instances such as the c5.4xlarge, meaning customers can save up to 70% in instance costs per channel.

Evertz uses the GPU for H.264 encode/decode and for some graphic elements. Since Nvidia no longer supports interlaced video, ORT moved to a CPU encode/decode so GPU is only needed to render some specific graphic effects.

The graphic plays out correctly from both Overture Playout engines without the need for special configuration. However, as reflections are only supported on a GPU instance the playout engine does not render this effect. The intelligent processing in the Overture Playout evaluates which graphic effects can or can’t be rendered, allowing the same content and graphics to be sent to both GPU and CPU instance types.

The evolution didn’t stop once the first channel was launched in the summer of 2017. Since then, Evertz has continued to evolve broadcast cloud playout for the benefit of Discovery and other customers.

Use of AWS CloudFormation Templates and AWS Auto Scaling groups allows Evertz to automatically spin up playout engines without any human intervention on . A typical linear channel  can take between 5 and 15 minutes to spin up plus content transfer time, depending on capacity (within the Amazon EC2 Auto Scaling group)and whether the instances are reserved or not.

To remove the transfer time on newly spun up instances and to save on Amazon Elastic Block Store (Amazon EBS) costs, Mediator-X employs Amazon S3 streaming functionality to playback content on Amazon S3 directly from Overture Playout. Mediator-X can make automated intelligent decisions on where to playback content from, based on the transfer status of the content. This functionality could save an estimated 60% on Amazon EBS volume costs per Overture Playout instance by reducing local cache volumes and taking advantage of the streaming feature.

Mediator-X has an integrated job factory, which manages workflow jobs such as running content through Amazon Rekognition to provide a content moderation service. Results from Amazon Rekognition are presented to users in the Mediator-X user interface alongside playout segmentation and comment metadata.

Today, Discovery runs over 300 over channels comprising more than 600 unique video streams from the solution deployed on AWS. Discovery can now launch new channels for distribution 90% faster than using a traditional on-premises solution. Since the launch of the Discovery system, other Evertz customers have also chosen to transform their playout and control operations.

The Evertz solution on AWS provides an accessible path to playout in the public cloud with a rich feature set. The collaboration with AWS has reduced the lead-times and complexities associated with large physical infrastructure deployments and allowed comparatively instant deployment of global services.

Deployment on AWS offers the added benefits of a rich library of services to enhance and strengthen our security, data resiliency, and reliability. Ease of access to these features is vitally important now more than ever.

For more information and to take advantage of this powerful solution, visit https://evertz.com/applications/mediator-x/

AWS helps customers run low-latency broadcast workloads with the most agility, elasticity, scalability, and reliability of any cloud. Explore https://aws.amazon.com/media/broadcast/ to learn more.